I just need it to support 4 trays of plants until Spring. It's the best price I could find on a T5 fixture...thoughts?

That's the same one I picked up for my starts near the end of last year. Haven't had any problems with it, and the seedlings seem to be loving it. Nice and easy to install as well. I got it for the same reason, best price I could find.Based on my (limited) experience so far I'd say go for it.
T

20 dollars for 2x4ft and t8 lights, and at any walmart/home depot. Works like a charm.

Extreme Member
Plus the 10 bucks shipping, but at 90 shipped is still a damn good deal for a 4 bulb t5.

It does seem like an excellent price for a 4-bulb T5, bulbs included. The kicker is 20,000 Lumens for $90 with energy efficient T5 bulbs, that is cheap. Anyone shopping for lights should really consider it imho.

I have plenty of fixtures but was on the hunt for a new one for some add-on trays. Too bad i didn't see that T5 sooner because i bought this one instead ($55 a week ago, 6500K bulb)

Edit: The best priced 4-bulb T5 fixture i could find was on Ebay for $85 shipped. But i think most people would be more comfortable with Amazon's buyer protection.

Extreme Member
Ha ha, I bet those two are the exact same light.

Ha ha, I bet those two are the exact same light.
Click to expand...

You'd be right. Exact same lights. The ebay price is the same price I got mine for with shipping off amazon. Seems the price on amazon has gone up a few bucks since I bought mine.

I went ahead and ordered it today. I can't wait to kick this grow in to high gear! I'm putting this over 4 flats of seedlings on a 6' folding card table. Should I just hang it up or box it in with some reflective material? How far from seedlings should I hang it? I have my current T12 about 2 inches from the tops of the plants.

T5's I hang a bit further from my plants, usually 6-9 inches from the top because they can sometimes burn leaves. You can put reflective material around them it won't hurt anything at all, and will help provide more usable lumens for your plants!

Good one Motorcity, let us know how it works out. And agreed with Lawrence, you can recapture a lot of lost lumens with reflectors, even if they are only white.

In the meantime, since i had a couple of higher powered CFL bulbs sitting around, i purchased this nice photo-softbox for only $18 shipped (no affiliation w/seller btw). Comes with socket + cord but no tripod, all for the same price as a cheap clamp light but this one is much bigger. It has an 85w socket, which means nearly 6000 lumens per assembly. There are other larger softboxes that can hold 105 watt bulbs which would equal more than 7000 lumens per assembly. I notice a lot of photography equipment is similar to growing equipment, especially the reflectors and bulbs they use.

The thing is - on the website, this fixture lists for $28.97, but it's on the shelf and out the door for $7.24 in my local store. These are the 28 watt T5's - not the 54 watt HO, so this fixture isn't compatible with the T5 grow light tubes I've seen, unless I change out the ballast. But, I'm getting 100+ lumens/watt, at an incredible price - and with more tubes / circuits necessary to achieve a given light level, I can use multiple timers to stagger the on/off times in order to simulate dawn and dusk.

Note (based on the few I picked up):
-No reflectors
-No power cord
-No on off switch
-Not HO bulbs
-Run very cool compared to HO t5's

Note (based on the few I picked up):
-No reflectors
-No power cord
-No on off switch
-Not HO bulbs
-Run very cool compared to HO t5's
Click to expand...

Whaddaya want for $7.00?...
Yes.. these are industrial striplight fixtures, none of the amenities of a consumer product. I bought the lamp extension cords in order to cut off the receptacle end to wire in as power cords, secured with the knockout grommets I bought, and the timer is the only on-off switch I need. I have the whole setup under a Mylar reflective tent - but I'll probably buy some reflectors on ebay for $5 each. I've always been a "roll-your-own" kind of guy. (I once bought a car BECAUSE I smelled anti-freeze vapor in the exhaust - I asked the dealer to write an estimate for a top-end rebuild, then told him to deduct that from the price and I'd do the work myself. I got the car for $250, did the rebuild, and drove it for 50,000 miles! I'm all about cheap.)

My Lowes is now out-of-stock on these striplights - I'm hoping their computer triggers a restock, and nobody notices the price goof - if so, I'll buy a bunch more, and a case of cheap 6500K tubes elsewhere. The thing I dislike the most about my setup is that my Lowes only stocks F28T5 tubes in 3500K color temp, so that's what I bought. Major bummer. I checked Home Depot yesterday - they have 4 colors of this tube, 3000K thru 5000K. They also carry a consumer "grow light" which includes two F28T5, 6500K "Daylight" tubes (plus reflector, power cord, on-off switch, clean finished housing, maybe even a hanging chain..) for $80... but Home Depot doesn't stock the 6500K replacement tubes. (And, despite their "Let us special-order whatever you need" signage, the customer service desk was unwilling to find/order replacement tubes for the $80 fixture they sell. That's OK though - I'll get them online, and run them in the fixtures I bought.)

Steve, consider buying lamps from this guy: http://www.payless-4-lighting.com/
Shipping was pretty quick and his price was unbeatable.

I use 3-prong computer power cables and just cut off the end for my lights. Can get them for free most of the time.


I'm a DIYer myself, sewed my fabric pots from scratch and used these light fixtures along with a PVC 'enclosure' as my grow space. Just wanted to point out that they're not everyone's cup of tea.

My plants are doing so well they are outgrowing the grow closet, not getting leggy just vegging like crazy. Some are producing peppers already.

T5's are great for veg and good on the pocket!

I've been stalking these online since your post and finally got them tonight. I plan to screw them into a shelf and use it for my indoor starts. I've already got 28 watt T5 bulbs because I like to higher energy efficiency vs the 54s and the lower heat. I think these 'cheap' fixtures are far more energy efficient than the more expensive 'grow' lights that house the 54 watt bulbs. I notice a lot less heat coming off these, which means more energy is going into light production.

9 of those fixtures for $63 shipped, not too bad in my book. 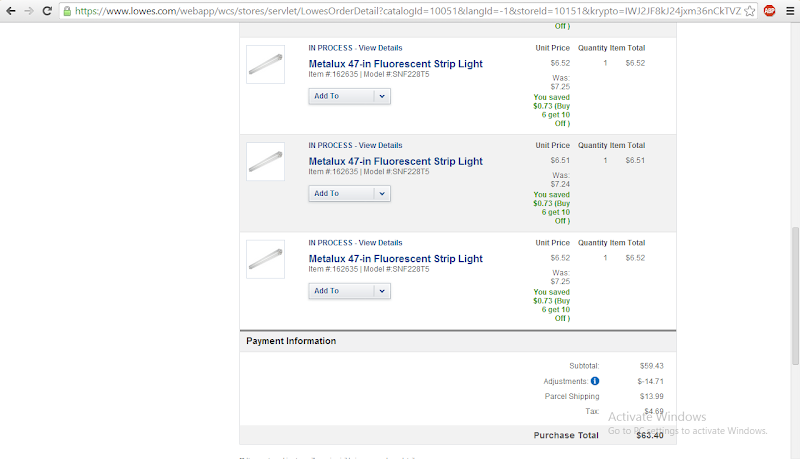 Extreme Member
Sweet!! They are listed for 12 bucks each for me.

millworkman said:
Sweet!! They are listed for 12 bucks each for me.
Click to expand...

Two tricks with Lowes:
1) The products will auto-discount. So the fact that you see them for 12 instead of 27 is a good sign. If you put them in a cart and check back once a week, you'll probably see them hit $7.

2) If you click "change store" and keep picking nearby stores, you might see the lower price. Yes, the online price varies depending on store.

Here's another trick worth trying... Find the fixture online at Lowe's, keep switching stores until you find the price you like, then print out that page and carry it into a Home Depot. Try to select an equivalent fixture at HD, take it with your printout to the customer service desk, and ask them to price-match.

When I looked at this on Lowe's website, it would only let me put one into my shopping cart, they had no more available. But if we can snag equivalent hardware from H.D. for the same price, that's just as good!
You must log in or register to reply here.

lighting A Small Indoor Hobby Grow and Considerations on the Subject of Horticultural Lighting.

Help picking the right light setup for my application???

B
lighting Are these LED lights & T8 bulbs ok for indoor?