Hmmm, no existing thread for Mike's new company. I guess I'll start one.

Put my first order in today. It is a pretty well designed website and a pretty good selection of peppers. I only ordered a few packets of seeds because I only had a few holes in my seed stock and I was glad to see that BPC had pretty much everything I was looking for.

The transaction was smooth and if you use Paypal, it is even simpler.

So far so good Mike.
Sort by date Sort by votes

Mike and Jen M. are good people.
I also had a pleasant shopping experience. Their website is also very user friendly!

Couldn't agree more. The McDermotts have a great site and are quality individuals (don't tell Mike I said that).
Upvote 0 Downvote

quick update: Seeds arrived in a couple of days in a padded envelope. Everything was included and even a bonus pack of seeds. No complaints whatsoever. I'd buy from them again, no question.
Upvote 0 Downvote

Mike and Jen are super nice people and have great gear.
Upvote 0 Downvote

Thank you everyone.
Upvote 0 Downvote

Thanks for the nice comments everyone - very much appreciate it!
Upvote 0 Downvote

I just placed my order from Buckeye pepper co. Once I get my order I'll write my experience down.

I've had ordered from Mike before when it was OBN, and I doubt anything would change. Mike and Jen are awesome

We actually stopped selling these for the most part. Wasn't much of a demand for them.
Upvote 0 Downvote

Yes, thank you Buckeye. You were my second pepper purchase (that wasnt from a major distributor) Thanks for making the experience enjoyable. Ill hopefully be starting the seeds today or tomorrow.
Upvote 0 Downvote

mmcdermott1 said:
We actually stopped selling these for the most part. Wasn't much of a demand for them.
Click to expand...

ANy way i can buy some?
Upvote 0 Downvote

Today I received my order from Buckeye Pepper co. Got them in on time and as always gotta receive a freebie

. Thank you Mike and Jen, will order again 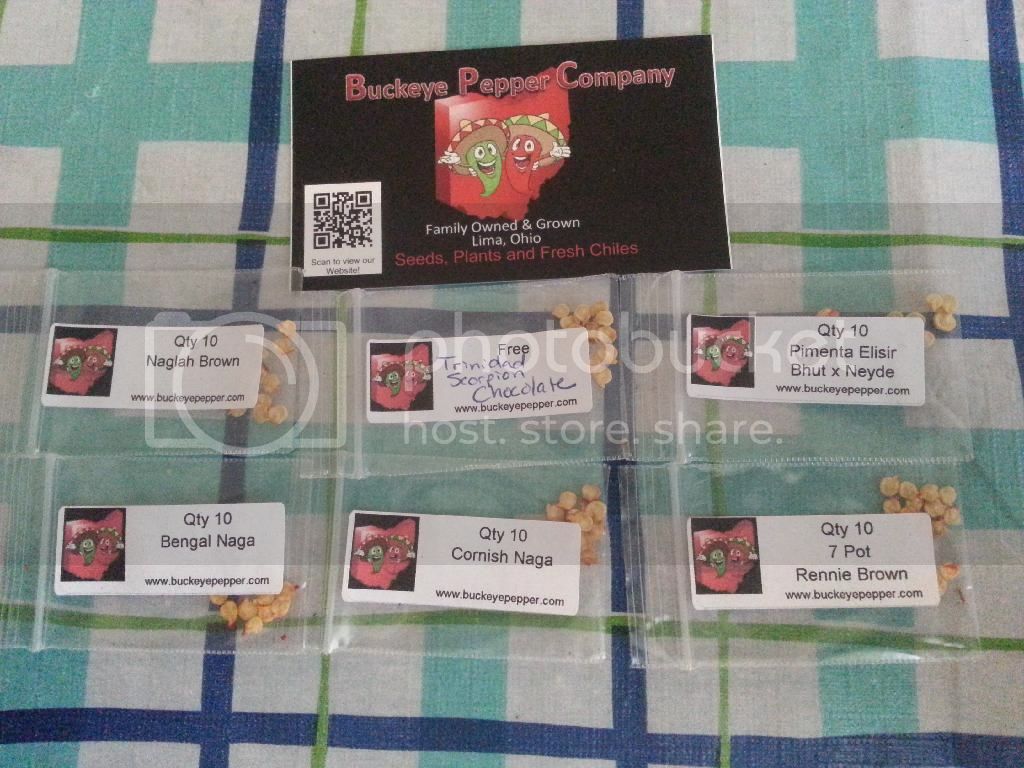 Extreme Member
best of luck with the new name. you guys are quality growers and suppliers.   customer service is very important and you got it nailed

Thanks to winning that short contest they held a little while back, I received both dried Reapers & Brown Naglah and 3 packs of seeds - Reaper, Brown Naglah & Urfa Biber... I received the package in the mail in around a week (which I found impressive, coming up here to Canada from Ohio). I've tried both dry peppers and they're both awesome, in my opinion, with the Reaper certainly having more flavor than the Brown Naglah.

To say the least, I was impressed. So tonight I emptied the last of my bank account (yeah, I tend to be broke lol) and ordered 3 more packs of seeds from them - 7 Pot Bubblegum, 7 Barrackpore and Fish - to show my support and thanks.

Hate to see you broke. We'll throw in a couple extras

mmcdermott1 said:
Hate to see you broke. We'll throw in a couple extras

No worries at all, it's only temporary. I see the order as an investment, just as I do anything I buy that is pepper-related and will go towards me growing more plants. And I see it as my Christmas present to myself. lol

jedisushi06 said:
ANy way i can buy some?
Click to expand...

I'm interested in this answer as well.  I've been looking for orange brainstrain seeds and you guys were the only ones I could locate that sold them.  I have red and yellow strains, just looking now for chocolate and orange to round out my collection.  Any help you guys can give on tracking those down would be great.

Thanks Buckeye!  I ordered Defcon 7 seeds and a cross from you guys, both were received extremely fast.  Unfortunately I've given all of those seeds away as a pay it back and pay it forward, so I'll probably be ordering more in a few days.
Upvote 0 Downvote

I am also keen to get my hands on some Orange Brainstrain seeds if they come back in stock.

Back to the original topic - I recently placed my first order with the Buckeye Pepper Company after reading some good things about them here.

I had fairly high hopes given the feedback I had read, but my expectations were well and truly exceeded when I saw that my order was received, processed and ready to be shipped within a couple of hours, in spite of me placing it on a Sunday! Not just any Sunday mind you - the Sunday before Christmas! Even got a nice "Thank you and Merry Christmas" note with the status update email letting me know that my order would ship Monday.

Still waiting on the order to arrive (I ordered from Australia so I expect I'll be waiting a while longer yet) but so far, I'm blown away.

Thank you everyone. Merry Christmas.
Upvote 0 Downvote
You must log in or register to reply here.

vendor Has anyone ordered from www.worldshottestchiles.com ???