Hey guys, here's another of my freebie product reviews. We're only one post behind my blog now, so don't expect two a week after this:

Hello again spice lovers, this week we're going to look at another of my samples from Chilli Pepper Pete and, like the Zhoug, it's one of their milder ones.

Emphasis on the “er”, of course, because, as I mentioned back in my overview, Chilli Pepper Pete doesn't actually do anything below medium. Which makes today's offering rather hot when compared to other, similarly coloured sauces.

That's right, it's a green one. And, unlike the Zhoug, it's not getting its colour from fresh herbs.
No, it's using tomatilloes and green chillies to make a salsa verde. One that I'm sure you'll agree, once we talk about its other ingredients, is far from ordinary. 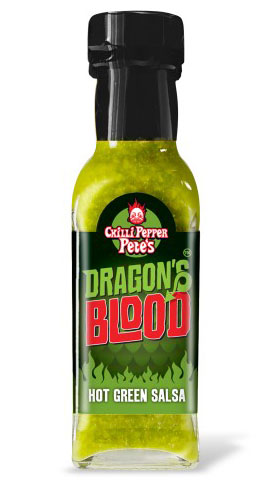 And, while its packaging may be very similar to the others in the Dragon's Blood line, its two-tone, yet in places also gradient, use of both dark and practically neon green is unlike anything I've seen in years. A particularly dramatic use of the colour that seems to never be associated with anything but dragon scales, making it all the more fitting for this salsa.

Indeed, it has those very same scales spotlighted behind the name of the line, which itself also uses that practically neon green. That, however, feels less like planning and more like a happy accident, given that the exact same red and green, slightly slanted Dragon's Blood name appears on five other products. It just fits in remarkably well with this one.

Whereas the brightly coloured flames that hold the product name most definitely were intentionally colour coordinated. Even if they are almost the same shade.

But, while a lot of design work has clearly gone into it, I can't properly judge this sauce's label from just the online picture. Not if the sauce itself is such a different colour: 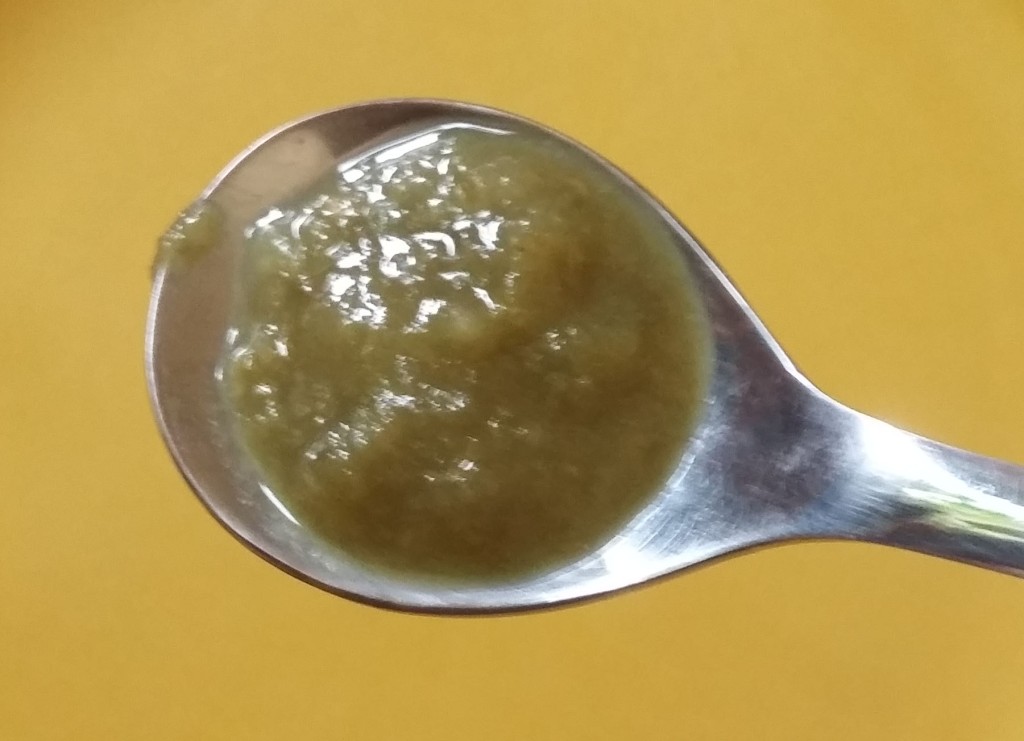 No, the lighting they've used is playing a major part in how vibrant it appears.
The sauce I saw, as neon as its packaging, looked sweet, fruity and tart, just like a red salsa. It was not what I got.

What I got was definitely on the tart side but more savoury than sweet and without any real fruity tang to it. Instead it had the smooth taste that I've since come to realise is a major part of what separates tomatilloes from unripe tomatoes.

Building on this is the clear presence of roasted green peppers of a non-bell variety, along with onions and garlic to further accentuate that smooth, soft, green flavour.
But there's a counterbalance to this smoothness, too, in the form of this sauce's thick, chunky texture, as well as some lime notes and its sharp
[SIZE=300%]3/10[/SIZE]
[SIZE=300%]Heat[/SIZE]
[SIZE=medium]which definitely feels like it's being helped out by the product's ginger content.[/SIZE]

[SIZE=medium]It is, indeed, very high for a green sauce, being somewhere on the boundary between medium and hot, but this isn't actually an entirely green chilli product.[/SIZE]

[SIZE=medium]The roasted taste does come in part from some standard green chillies, with jalapeños included to support their green flavour, but Chilli Pepper Pete have also included some of the large, round facing heaven sort that I used in my vegetarian mapo tofu. Both to increase the salsa's heat and to enhance the roasted side of the other peppers.[/SIZE]

[SIZE=medium]It's an interesting choice which I'm actually rather happy with but it does limit the usage of this salsa a bit, in my opinion.[/SIZE]
[SIZE=medium]Most of what I would want a green sauce for is not something I would choose facing heaven rounds to go with and most of what I would want those facing heavens with (primarily chinese dishes and roasted meats) wouldn't go with such a green sauce.[/SIZE]

[SIZE=medium]I feel as though it might be good with thai food or on nachos but what I actually see this one going best with is eggs. Especially in or on something like mexican style huevos rancheros or a north african shakshuka.[/SIZE]

Upgrade Now!
You must log in or register to reply here.

Yesterday at 9:05 AM
The Hot Pepper