I'm growing both outdoors and in an unheated high tunnel on an island in the PNW, and looking for some suggestions on Chinenses that have strong flavor and relatively short time to maturity or at least do well in our cool weather.
I really want to find both a seasoning pepper variety or two and a scotch bonnet variety (or equivalent heat and flavor) that will do well.

On the Chinense front, this year I grew Trinidad Perfume and was really impressed with the flavor, but the plants were small and fairly low yielding, and also pretty slow.
I also grew Red Mushroom from Territorial Seed, which grew really well, produced early and heavily, but wasn't particularly flavorful and also was a bit on the low side for heat.
I didn't even try to do scotch bonnets because I had a friend who grew some in her tunnel a few years ago and only had 1 pod mature before the end of the season, but may also have been that she didn't get them started early enough as she mostly grows faster annuums for market.

Anyway, wondering if anyone has any recommendations of specific varieties of either seasoning type peppers or hot peppers that seem to be better suited to this climate.
Sort by date Sort by votes

Admin
I am going to suggest Orange Lantern. I have read about the speedy maturity. Plus, it seems like one you would like: 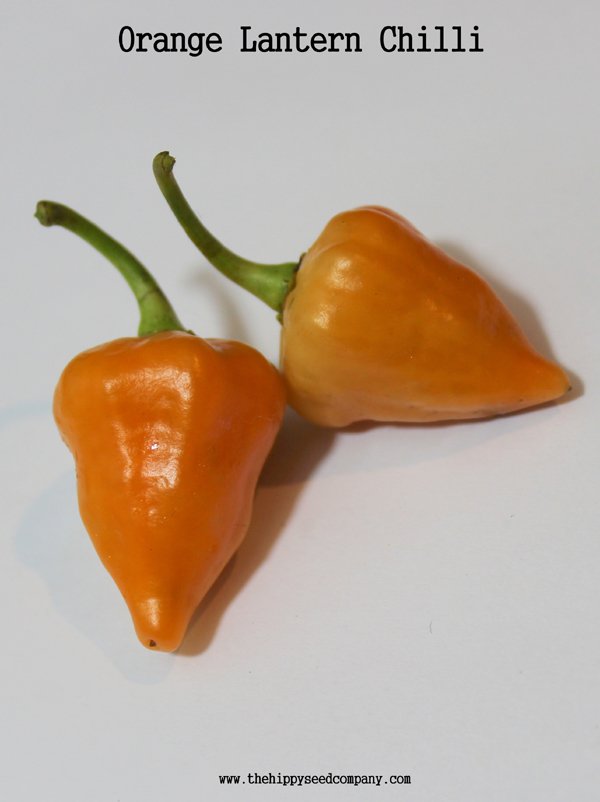 Admin
My second suggestion would be Super Chili, though, not chinense. A great producer in a multitude of climates and fast to maturity. The dried powder is fantastic! 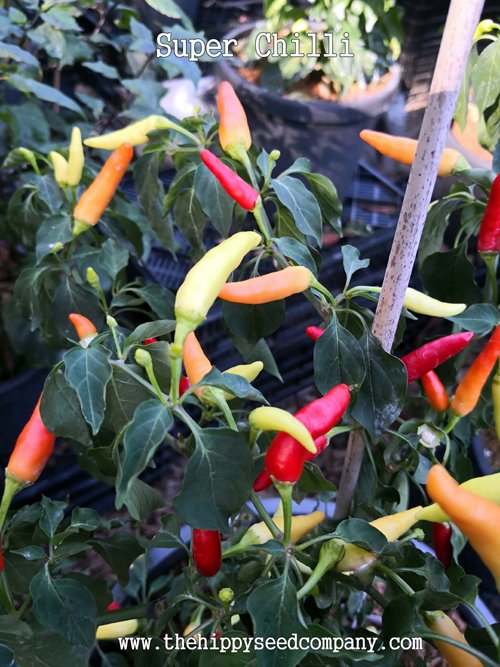 Super Chilli is a plant with an extremely thick, bushy and lively look. A great producer is also and it is super easy to grow.

Admin
@TexasHotPeppers will you be stocking these seeds again? 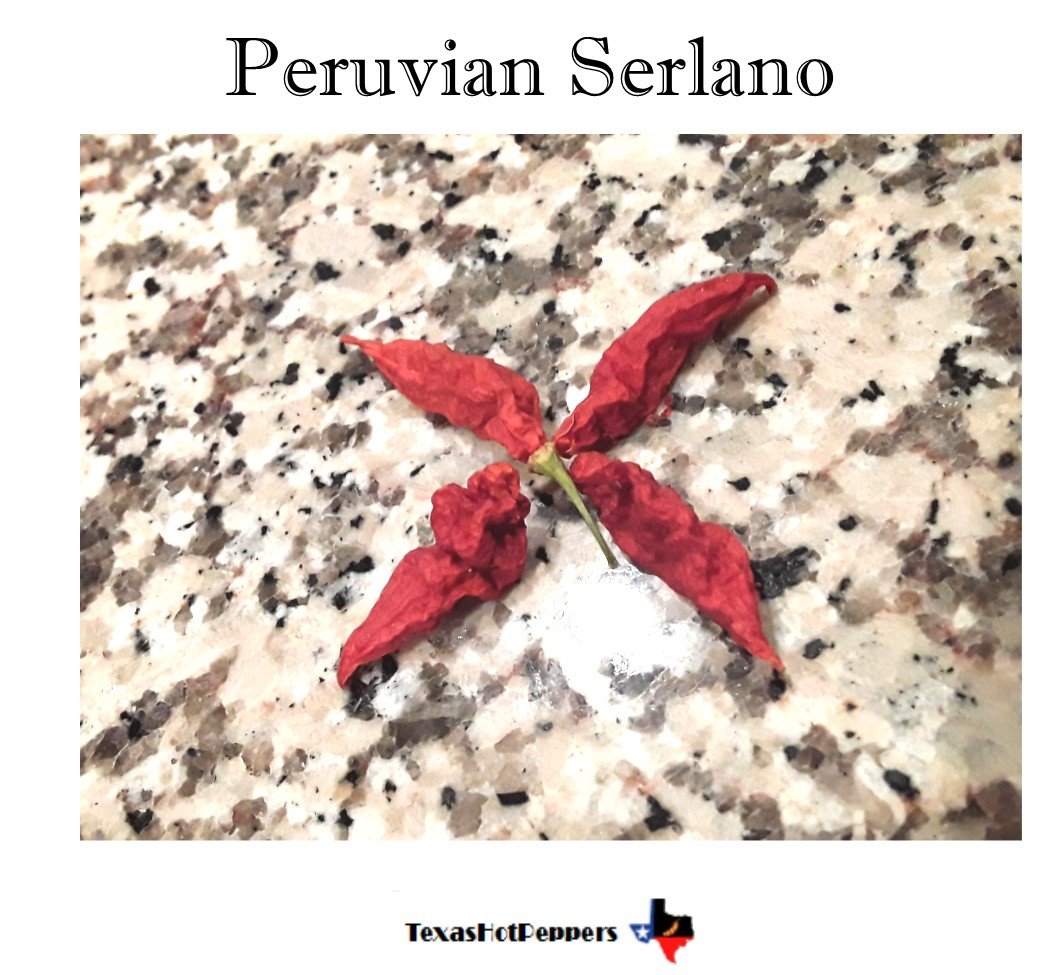 Peruvian Serlano - 10 Seeds Great variety! Small thin pods ripen to red, very hot, but with great flavor. Plants absolutely LOAD up, a fantastic yielder. Rare variety that should get more attention then it does. Apologies for the pic, I only managed to get some of some dried pods.
texashotpeppers.net
Want a signature for fun or advertising?
Extreme members can put text and a link here!
Extreme Biz members can put text, a link, and an image!

Thanks! Will definitely explore those.
My best grower this year was Aji Rico, an F1 Baccatum - it was very early and had a really nice citrus flavor and mild heat, and made a good base for fermented hot sauce that I then juiced up a bit with scotch bonnets.
The red mushrooms made a nice mild red pepper flake.
My mom in California grew some red scotch bonnets from seed that I got from grocery store peppers in Trinidad a few years ago and mailed them to me, and it reminded me how much I missed that heat and flavor. Excited to see what I can get to grow next year.
Upvote 0 Downvote

Admin
Here is a very high yielding bonnet with flavors you seem to like: 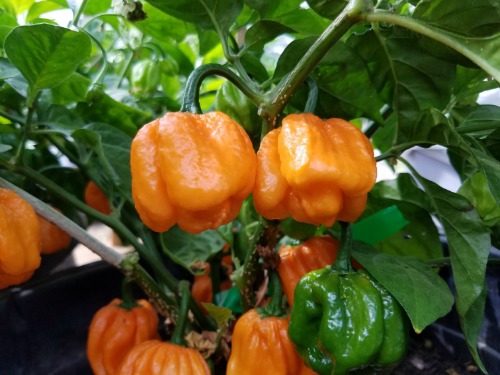 And since you like bonnets you should check this out:

I just had to post about this plant. I had bought some seeds from WHP and got this as a freebie. The label says Scotch Bonnet Marabella Market Caramel. I went ahead and started a couple of seeds for fun (the peppers I ordered are for next year), got a good seedling going, and planted it in a...

Long-time THP veterans mourned the loss last August of Amarillo, Texas musician/songwriter/silversmith/chilehead Erin Mason, known to us here on the boards as P. Dreadie. Erin was an enigma, one of the most interesting and creative, yet gentle and loving guys I ever knew. Many of us may be...

Extreme Member
I don't know what your goals are in terms of production. Just about all peppers do okay in our area if the Spring and Fall seasonal weather is benign making for a longer grow season. Luck plays a large role weather-wise for me. I'm thinking Datil and Fatali should do well in your tunnel, as well as JA Red Habanero and Yellow Scorpion. The plants I grow in 2 and 3 gallon pots generally ripen earlier than plants in large containers. Trade off is not as many pods. Sugar Rush Peach are early producers in our climate, and Aji Amarillo very productive even in a 3-gallon pot if you can protect it in the crazy variable Spring Weather. Scotch bonnets are always hit and miss for me. Probably most consistent in my yard is Beth Boyd.

Don't know how this applies to your more northern island location, but under your tunnel, our climates are probably similar

Good luck finding the varieties that fill your bill.
Every Pod a Victory! Life Force is Strong! \O__
Links to all my grow logs here.
Upvote 0 Downvote

Awesome, Thanks Paul. I had one Sugar Rush Peach plant this year and liked it - set fruit quickly, but then seemed to take extra long to really get color and I think I picked a lot of it a bit early. It was my wife's favorite, and in the roster for next year. We also grew little Criolla Sella, which is really nice dried as well.
I'm mostly looking for the mild / seasoning peppers for fresh eating, and then planning on doing a mixture of hot sauces, some drying, and a little bit of fresh eating with the hotter guys.
I was thinking about trying Datil & Fatalii, good to hear that you think they'll do well.
THP thanks for the thread references.
Last edited: Oct 31, 2021
Upvote 0 Downvote

The variety that I would recommend right off the bat after reading your post is Safi Scotch Bonnet. I live in BC, just north of you in the Metro-Vancouver area, and I've been attempting to grow chinense's up here as well, where our climate is almost identical to yours. Safi is early, productive, adapted to coolness, has a solid heat level, habby flavor, and a dwarf stature, which makes it easy to grow in pots, and take indoors for the winter. A group of varieties that have produced loads of pods for me, early and cool weather adapted with high heat has been the jelly bean habaneros, as well Peruvian white, Yucatan white, and similar small fruited varieties. Very early, and bear loads of pods with habanero level heat. I've also found that for a more standard red habanero, the Caribbean red hab is one the earliest and best adapted for our region, along with paper lantern. Other habraneros I've had good results with include the Andean Beni Highlands, and Aji Limo. If you're interested in growing bhut jolokias and other super-hots that are well adapted, I'd highly recommend buying them from Atlantic Pepper Seeds (https://pepperseeds.ca/). If you search for APS on their site, all of their varieties come up, which they've bred for production in the cool, foggy conditions of the Maritimes in eastern Canada. APS Ghost Pepper Red is the one that really stood out for me. APS also has Safi, along with some well adapted aji's/baccatums, etc. I've found others that do well here that aren't necessarily chinense's are Aji Russian Yellow and Aji Lemon Drop, as well as Ring of Fire cayenne. In the past I've also tried rocotos/ pubescens with good results, but they tend to be late producing (although, apparently some earlier producing varieties do exist). Not a habranero or scotch bonnet, but well adapted and some varieties have decent heat. Same goes for aji/baccatums, although they tend to be less hot than the rocotos. More non-habraneros that have done well for me in the past: Hungarian and Czeck black peppers, purple serrono, Hungarian wax/banana, Bulgaian carrot, Tequila sunrise.

Other varieties I hope to try soon include:

I not only buy my seed from APS, but also Semilla's (https://www.semillas.de/shop_en/).

That's all I can think of, for now.

Extreme Member
@hdra I just received a pack of Super Chili seeds earlier today (among freebies) that I will not grow. If you want to give them a try just pm me. Might have some other seeds from strains that could match what you are looking for as well but would need to check...
Last edited: Nov 3, 2021
"You are not special. You are not a beautiful or unique snowflake. You are the same decaying organic matter as everything else." - Tyler Durden
Upvote 0 Downvote
H

@LordTriffid78 , thanks for the suggestions - definitely will check out Atlantic Pepper Seeds. I've mostly been shopping with vegetable seed companies since I'm familiar with them from work on an organic farm, so its exciting to start exploring the whole crazy world of pepper seed people.
I grew two hungarian hot wax plants this year and they never really took off - only got a few fruit off each one. I was planning on growing them for pickles, but don't really like them otherwise, so think they're out for next year.
I can definitely recommend criolla sella - they did very well for us this year, the flavor is bright, and the heat is a good level, for my palate at least.
Upvote 0 Downvote

Bou said:
@hdra I just received a pack of Super Chili seeds earlier today (among freebies) that I will not grow. If you want to give them a try just pm me. Might have some other seeds from strains that could match what you are looking for as well but would need to check...
Click to expand...

If you cook a lot of Asian food or want some good medium-hot heat powder I'd take the offer. The plants grow very bushy with hundreds of pods.
Want a signature for fun or advertising?
Extreme members can put text and a link here!
Extreme Biz members can put text, a link, and an image!

What about C. Flexuosum? Very different from a Chinense, but been following someone in Nanaimo on Instagram (@smallislandseedco) who seems to be having success growing them outdoors in ground as an actual perennial. Thinking about getting seed from them and trying to plant a few tin one of my perennial beds.
Upvote 0 Downvote

Another one that comes to mind is Purira, a very hot annuum, early and adapted to cool conditions. The fruits have a drier flavor, and not much aroma.

I seem to remember a few years back, I think a grower from Portland told me that MAO scotch bonnets and Bahamin goat's pepper worked well for him. And in response to one of my forum posts, a number of people remarked that CARDI yellow Trinidad, and Moruga Trinidad scorpians in general seemed to be some of people's earliest of the super hots from Trinidad, although I gather that heat range might be a bit outside of your preferences.

Thanks for the info on Small Island Seed Co. I had no idea that someone was successfully growing flexuosem perminently outdoors in BC. I'm definately going to have to buy some seeds from them. If it's got cayenne heat level, and fully frost hardy, here, then why wouldn't I want to grow that?
Upvote 1 Downvote
You must log in or register to reply here.
New Posts

heat Do cold nights have a detrimental effect on pods?