Unfortunately my very first hydro pepper plant that was started last November did not recover from the damage done by tropical storm bill.

Being my first hydro plant it endured all of my beginner mistakes and taught me most of what i know about hydro. Despite the ups and downs this plant was an excellent grower and produced over 300 pods in its short lived life.

With that said in honor of this gorgeous chocolate hab I would like to spread it's strong genes to anyone who is interested . Just PM me for my addy and send me a sasbe. 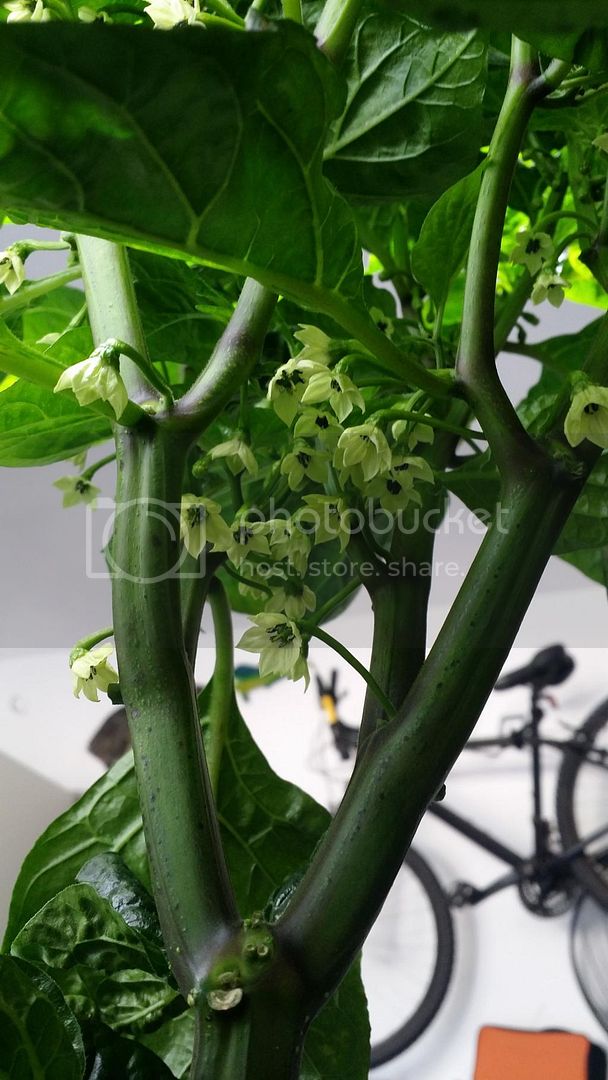 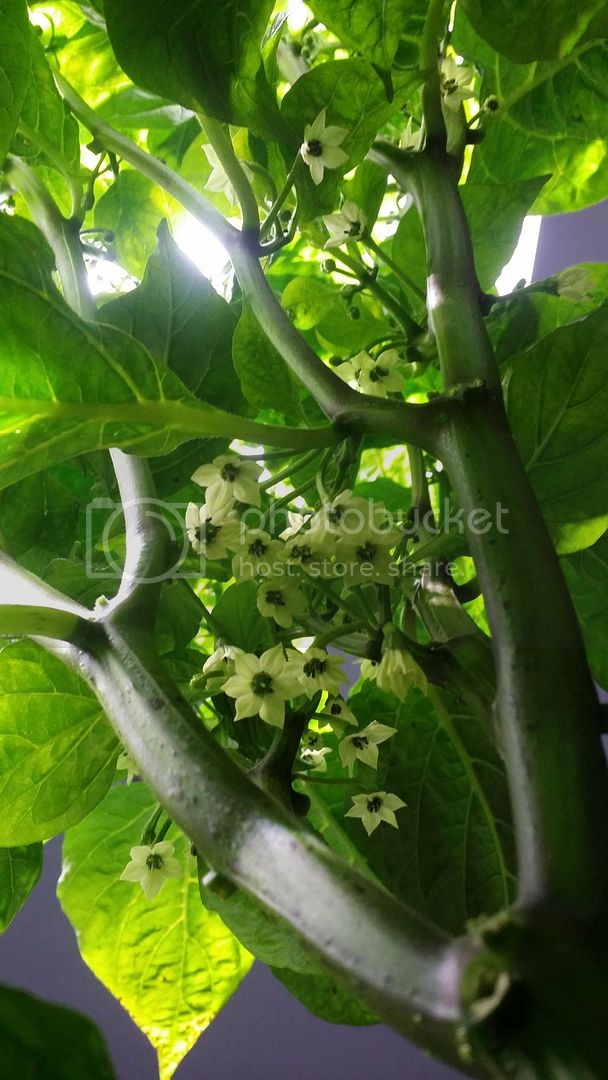 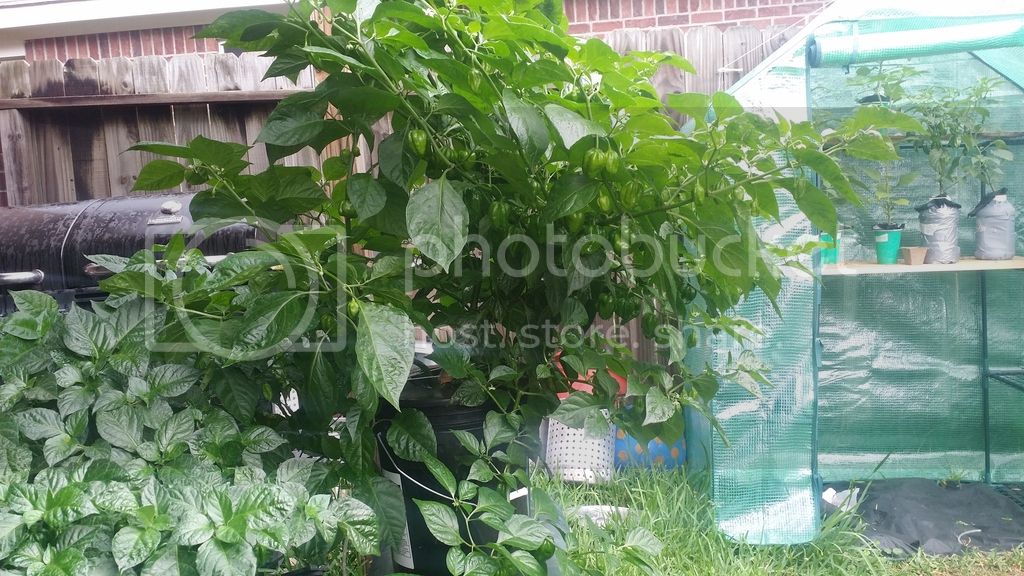 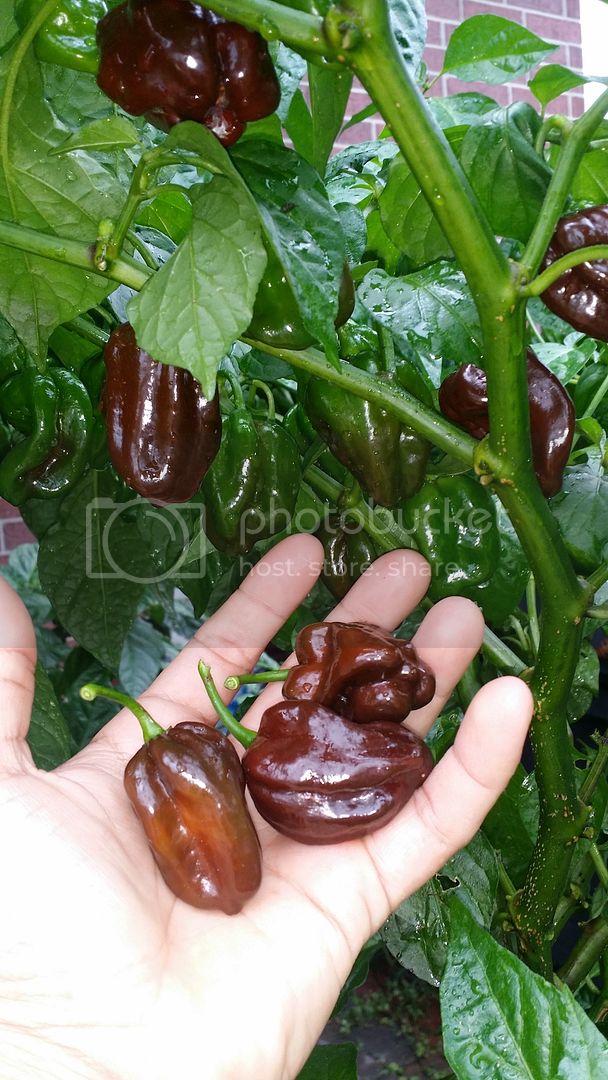 What a producer your plant was. I already have some or I would be in.

On the emotions driving your effort: Wow  I always find myself feeling that way about sickly plants and critters, but 300 pods in a short life doesnt seem like a runt at all.

thanks to you, i already got a 100 seeds from those pods you sent!

Beautiful plant and pods, choc habs are one of my all time favorites.

Very nice and generous seed offer!good on you

Thanks all for the kind words. I've replied to all PMes. I've been seeing alot of guests viewing this. If your out there just lurking this offer is also for you. Don't be shy. Join up and send me a PM. I don't mind any new members with low post counts.
R

Hopefully mine will produce even close to a quarter of that.
My fourth grow and my first where chocolate habs have done more than just a taproot.... 3 for 3 on survival so far this year, but it's looking a bit grim.... Tallest plant is maybe 6" but it has lower branches and its just beginning to fork at the top, smallest plant is an inch or two shorter and only a few leaves, both of these were bordering death a few times but pulled through. The strongest seedling is now just a stick with two tiny tiny leaves pushing out again.
Not to take over the thread, but.... These were outside from day one after the first hook was visible, moved to full sun after the second set of true leaves and then transplanted into a raised bed, starting with the smallest seedling to test the conditions of the soil. After a few days of short and heavy rain, days and days of 90+ and 100f temps came through.... The strongest plant got sunburn bad, the now strongest one has deformed leaves. The bed is good, transplanted a tomato in the bed, its way bushier with larger fruits than those not in the bed and the cucumber in the bed is catching up to those not in the bed.
I just have bad luck with chocolate habs in general, apart from peppers this year.
Impressive plant, hopefully it passed some of that on to the seeds you're giving away.

I know what you mean. The heavy rain and then high temps make a sauna like effect that just kills the plants. In my case the constant two weeks of rain killed the roots by the non stop PH swings. I would have put it inside if it wasnt such a large plant.

Yellowfin2na said:
I know what you mean. The heavy rain and then high temps make a sauna like effect that just kills the plants. In my case the constant two weeks of rain killed the roots by the non stop PH swings. I would have put it inside if it wasnt such a large plant.
Click to expand...

i've wasted lots of nutes on all this rain! maybe i should make a water proof barrier on top of my planter?

I count on rain so I can collect it and use throughout the season for my grow. I'm sure it saves me a ton of money on RO water, but at the same time can't stand it when it's constant coming down on everything causing the ph to go outta wack. It's a love hate relationship.

Thanks Yellowfin ! II received my package today of seeds with a couple surprises !

If you are still giving seeds away I'd love to take some off your hands!

I only have 1 plant right now and it's a jalapeno, and it is quite weak... It's 2 years old and throughout its whole life I have only gotten 5 peppers from it. I'd love to have a strong variety of peppers in my garden. Anyways, if you are still giving them away, please consider giving me some. Thanks!

Received seeds today, they came with a really nice surprise bonus too. Thanks Yellowfin! I am really looking forward to growing these

Here's one of my plants I started from seed from yellowfin ! Thanks again bud !

Deano5x said:
Here's one of my plants I started from seed from yellowfin ! Thanks again bud !

This is really cool to see!

Here is another plant I have been growing indoor with t5 lighting . When Yellowfin2na sent me the choc. Hab. Seeds he threw in a couple other seeds , I think he told me this one is a lemon drop ?

Deano5x said:
Here is another plant I have been growing indoor with t5 lighting . When Yellowfin2na sent me the choc. Hab. Seeds he threw in a couple other seeds , I think he told me this one is a lemon drop ?

Oh man this one is far from lemon drop. I'm trying to remember what all I may have sent you. To be honest I sent probably over 20 sasbes. Hmmmm..... those almost look like one of my off pheno peach wasp plants. Guess we will see what color they change.

So your right there turning peachy ?
You must log in or register to reply here.