A couple of months ago my boss was driving from Atlanta to Mississippi to do some gambling, when somewhere in Alabama he saw a sign advertising local hot sauce. When he got back to to office (a couple hundred dollars richer too, go figure) he fired up the Google to find out if he could buy some of that sauce. Never found what that sign was for, but he did find Earl's Ghost out of Huntsville. We liked what we saw, so we made an office group order (of over $100, my wife thought I had gone more insane when she saw the credit card statement, but was probably relieved it wasn't more guns). My boss mentioned to Earl that I like growing peppers, and Earl threw in a bunch of seeds for free, which was pretty awesome.

Here's what the group ordered: 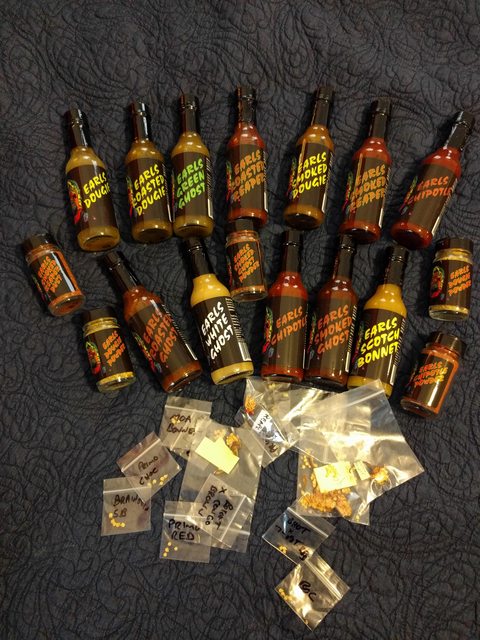 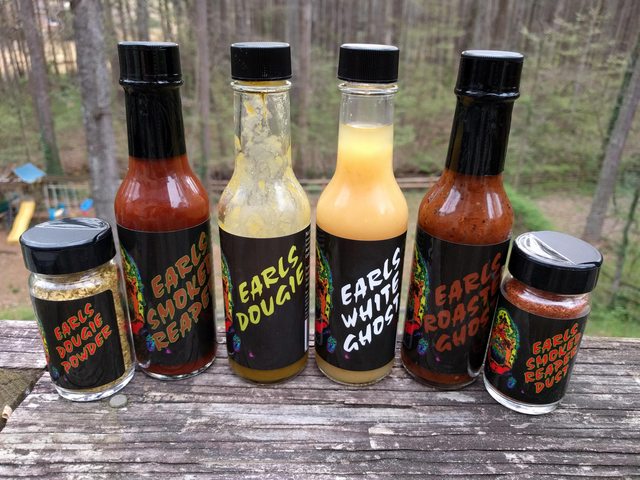 I don't have the most refined palate, and my heat tolerance isn't as good as most on this board, but here's my thoughts.

Note: The "dougie" pepper is Earl's own cross. He describes it as a mustard superhot that is nearly stable. I haven't had a lot of mustard peppers, but the dougie powder and sauce are both wicked hot with a surprisingly slow attack. When we first got the delivery we were standing around in my boss's office tasting hot sauces directly off the backs of our hands (our own hands, thanks for asking), and the response to the dougie was always "Hmm, this isn't so hot.... OH!". The smoked version of the dougie sauce was one of my favorites in the group order, sadly it's not part my share.

All the sauces we got were variations on a very simple theme. Peppers + vinegar + onions + garlic + (sometimes) carrot. This format really makes it easy to taste the differences in the peppers themselves. I was surprised by how much I liked the White Ghost variety, it's the first hot sauce that I've actually been willing to try on ice cream.