EDIT 8/16-- OK, after all this kvetching, i finally got imgur figured out, and i think i even picked the best size for the images, etc.  Feels kinda awkward, all these waiting for a few low-quality shots, but I'd be dumbfounded if anyone expected much out of my photos, at this point.....  I hope you like'm! I definitely liked eating them, plus i gave 3 of'm away. -Rob

So... I've been reading up on some Scotch Bonnets lately; I guess I'm getting a little bit obsessed.  Getting a SFRB with some PDreadies and Red Foodaramas just stoked the obsession more, but we'd already been planning a trip up to the Trenton's Farmer's Market today anyway.  I rolled up there with the Missus and a couple of friends today, and I figured I'd share the results.

We've probably all seen some Bonnets online identified as "TFM;" some folks say this stands for "true form," but most claim it stands for "Trenton Farmer's Market," b/c a grower found some nice pods there and collected seeds to try and set the strain.  I can't say for sure which is the case, but i gotta say that "TFM" is a dumbazz'd abbreviation for "true form."  Either way, when we got there, I quickly found some Bonnets, most of which were of a pretty nice, proper Tam O'Shanter shape.  Oddly enough, they had more green pods than yellow, and a few of the ripest pods had a bit of an orange tinge to'm. 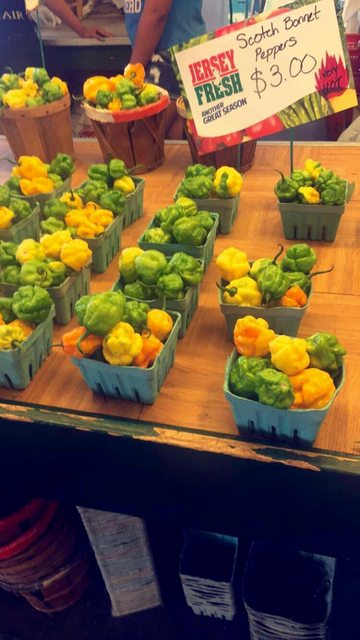 I grabbed a half pound for $3; I tried to get a box with a lot of yellow in it, but there's plenty of green ones, too.

From there, we bought some other shit (pastries, some banging perogies, I found some ordinary but nice-looking red Habs, 1/2lb for $2, so I grabbed those too), made a stop for some tomato pie nearby, and then headed up to Princeton.  Overwhelmed by these Scotch Bonnets, I dropped about $80 on reggae records at the PRex.  Just some irie feelings, I suppose.  Anyway, here's some slightly more detailed pics: 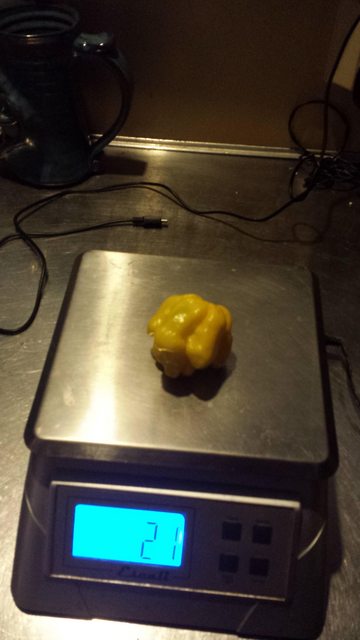 Here's one of the bigger pods.  At 21g, it's not really big.  This one is pretty true to form, with a nice yellow color. 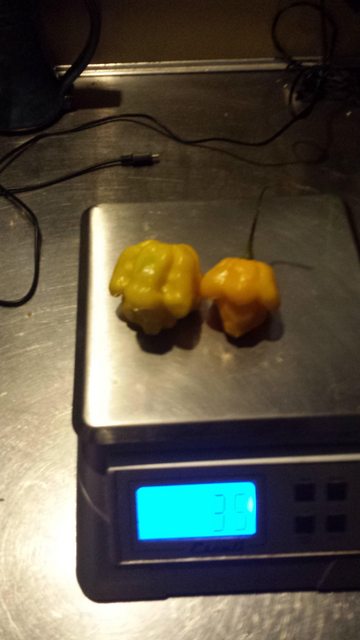 Here's a pic of the same pod, next to a smaller PDreadie I got from THP member Hybrid Mode 01 yesterday.  Just figured I'd offer that up for comparison. 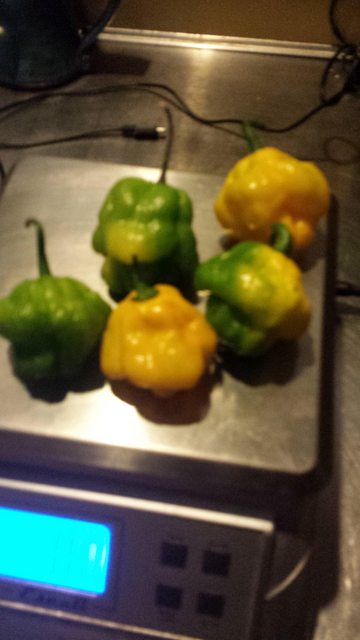 Here's a few of the other ones.  Most of them have the proper Bonnet shape, the color looks right on the ripe ones...  I'm ABOUT to bite into one, but I've been kinda ODing on these peppers I got in the mail yesterday, LOL, so I might wait til tomorrow.  I can't say for sure if these are coming from the same source as the SBs labeled as "TFM" on the internet came from, but they do seem to be bona fide Bonnets, rather than the mislabeled Habs I've grown more accustomed to.  Next time I head up there, I'll be sure to ask how long they've been vending at the Market, etc.

My question to y'all: will these green pods turn yellow if I leave'm in close proximity (in a paper bag, maybe?) with the ripe pods?  I know that green Jalapenos will never turn red, if you pick'm when they're green.  The young lady at the farmer's market said they'd turn yellow.... but she may have been full of shit.  Any thoughts/experiences as far as SBs that were picked before they were ripe?

Well, thanks for tuning in.  I hope that every douche from Jersey doesn't create this exact same thread when they first join; I was just thinking it might be cool to go to the TFM source, snap some pictures, and take some samples....

Sounds like a good day. I want my mother in law to come for a visit and make me a ton of pierogi.

I can help with the picture posting but it's not simple. Go get yourself a free photobucket account. Upload your pics to photobucket. Open the picture. Use the bottom choice of the four code generators to get the image insertion code which copies into memory. Come back to your forum post here and paste your code into the line where you now have have (PICTURE PENDING, IF I CAN EVER FIGURE OUT HOW TO POST'M)

Preview your post to make sure it works right.

It is a kind of a Rube Goldberg procedure. I think the alternative is buy an Extreme Membership and then you masy be able to directly insert pics in your posts.

Unfortunately, she was probably full of shit. A pod will ripen after it's picked only if it's just on the verge of turning, or just has a little green flesh that has yet to change. Fully green pods will probably not ripen.
DWB's info is good for posting pics, but I would recommend you stay away from photodumpster. It is notoriously buggy. Some days it's just an unmitigated nightmare to get pics to post properly. I switched to imgur recently and have never looked back.
Glad you're enjoying the pods. Keep taking notes on what you like and save lots of seeds. Trading seeds on THP in the offseason has a way of making your grow plans for the next season get waaaaay out of control. Which is nice.

drag files into imgur.com and copy the address in the bar here.

green pods usually don't ripen too much off the plant. ones that are already turned and just have a little left to go are fine though.

I find in the UK I get more hand mislabeled as scotch bonnets.

Sent from my HTC One M9 using Tapatalk

i've found that postimage.org works well..same deal, upload your image, copy the direct link code and paste in the image properties bar that will open when you click on the image button in thp toolbar..baddabing baddafugginboom!

Photobucket has always worked great for me. I've used it to embed pictures in forum posts since 2009 and they're still there, no problems. I paste the code directly into the body of the post and it comes out like this. 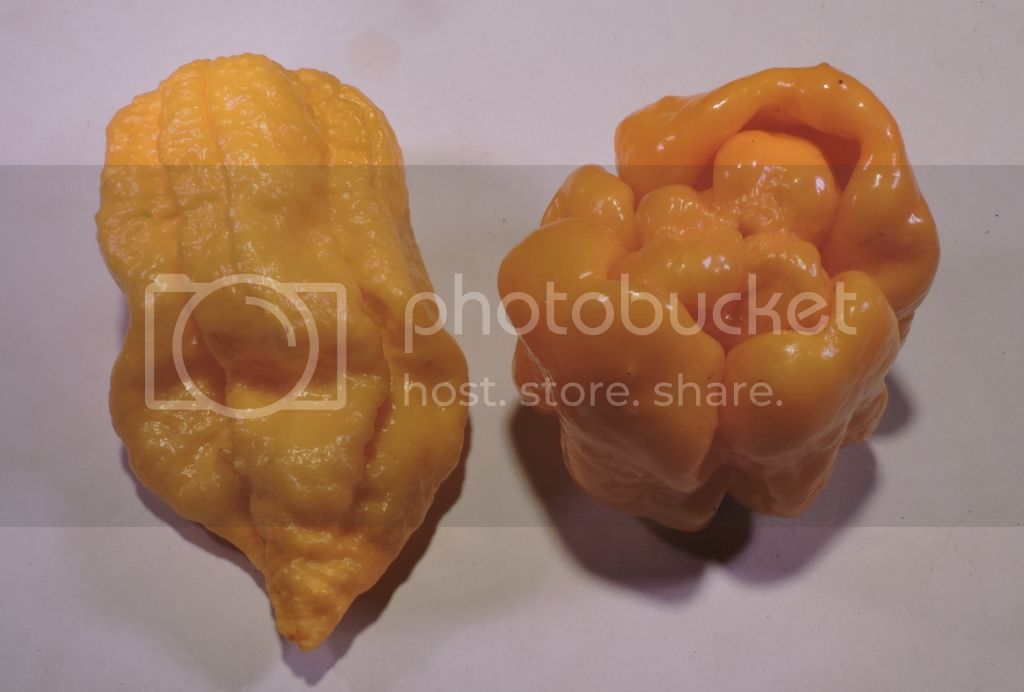 I'll get it worked out today =D

Glad to meet another member obsessed with Bonnets .... According to my notes the original pods were sourced from the market in 2008 ... looking forward to seeing current market photographs. You will read about Foodarama and Saraga two other food stores that have produced good stock ... give me a shout later in the year and I shall send you a selection of bonnet seed

Trident chilli said:
Glad to meet another member obsessed with Bonnets .... According to my notes the original pods were sourced from the market in 2008 ... looking forward to seeing current market photographs. You will read about Foodarama and Saraga two other food stores that have produced good stock ... give me a shout later in the year and I shall send you a selection of bonnet seed
Click to expand...

Still working on the pics; i'll probably just upgrade my membership here.  =P  But, i appreciate the offer on seeds.... just had some red Foodaramas.  Tasty little critters.  The first round of TFM Bonnets have been devoured and/or sauced, but I'm getting more with the intention of saving seeds.  LMK if you want any.

I just updated the original post with pics!  Thanks for your patience, everybody...

Nice looking pods. I have noticed with unripe pods the seeds can be a crap shoot if there viable or not. Sonetines you can tell right away once cutting the pod open or once there dried. Bad seeds will have brown or black in the center of the seed. Imho.

Good to know....thanks!
You must log in or register to reply here.

misc Pepper package in the mail