Veterans Day, formerly Armistice Day, is an annual United States holiday honoring military veterans. It is a federal holiday that is observed on November 11. It is coincides with other holidays such as Armistice Day or Remembrance Day, which are celebrated in other parts of the world and also mark the anniversary of the signing of the Armistice that ended World War I. Major hostilities of World War I were formally ended at the 11th hour of the 11th day of the 11th month of 1918.

So to all my fellow Veterans who stand watch in harms way I wish you a day of peace. To those Brothers who have fallen Gods Speed and to all Veterans every who have placed their life on the line for their country I wish you a Happy Veterans Day and an Ice Cold Beer.

It's Remembrance Day in Australia. After travelling around the world, especially to poor and under-resourced/overpopulated countries I feel very lucky to live in such a great place, and I'm grateful for all the people who died to keep it like this.

Extreme Member
I have just raised my flags and said a prayer for those who I served with and are no longer with us. They made the ultimate sacrifice of life for freedom.

Ronnie Walley
HM2 USN
1969-1973
AJ
"If people will learn to "listen" to their plants, they will tell you what they want". AlabamaJack

AlabamaJack said:
I have just raised my flags and said a prayer for those who I served with and are no longer with us. They made the ultimate sacrifice of life for freedom.

Much obliged for your service and God bless you Ronnie. Never served myself but pop did 26 years in the USAF. He did the Nam in '69.

Salute to all Veterans, my prayers and thoughts are with all of you.

I wanna say thanks to all the Veterans out there, American and foreign. I have served with courageous Americans, Brits, Aussies, Italians, Spanish, and Dutch service members. The enemies bullets and bombs rarely have a name on it, just "To Whom it May Concern". I am honored to serve along side the greatest people on the planet that all have one unified goal in mind, to help those in need.

Also to all who gave the ultimate sacrifice, you are never forgotten.

Thank you to all the veterans and especially to those who gave the ultimate price for our freedom.


God Bless you all.

thank you, to all that have served past & present.

Extreme Member
my sweet wife took this shot of our new Weimaraner this morning after I had hoisted our flags...and I sure wanted to share it... 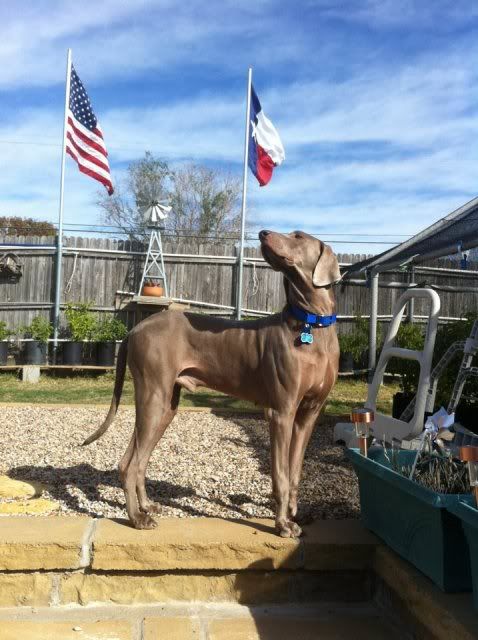 AJ
"If people will learn to "listen" to their plants, they will tell you what they want". AlabamaJack

That's a handsome dog Ronnie and a bit of ham judging from the pose. Spoil him rotten!

Business Member
Thank you to all who have served, past and present, you are never forgotten and always appreciated.

My grandfather's ship was the USS Arizona. By a twist of fate, he was in San Francisco in Dec 1941.

here's one to get ya going. WOOHOO!
PureEvilProducts
The Chile Addict's prayer-"Lord, grant me the wisdom to know it will be too hot, the courage to eat it anyway, and the serenity to accept the pain that follows. Amen"
PepperPeopleRock!

Thank You Bill, Ronnie, Matt, and EVERYONE else who dedicated your lives to protect this great nation. (sorry if I missed your post here)
I'm glad there is one day a year to give people like me the chance to thank people like you. And to remember all those that have come before. Thank You!
Peace,
Jim


Good lookin' pup there AJ! thanks for sharing.

Extreme Member
Thank-You for your service!
"Insanity: doing the same thing over and over again and expecting different results." - Albert Einstein

Missed this post, but my grandfather, father, uncles, myself, and my youngest son all served.

For me, I try to do a little bit by raising money for Disabled American Veterans. This year, I have decided to give ebay a try and have put up several of my crosses... 100% of the proceeds will be donated to Disabled American Veterans. Not knowing how ebay works, I am entrusting them to give 50% directly to DAV and I will provide the other 50% directly.
You must log in or register to reply here.

Memorial Day - A Tribute To Those Who Gave The Ultimate Sacrafice

What is Memorial Day?