Forgive my picture taking skills!
Got a SFRB from Chris, however missing from this picture are several peppers I consumed upon opening the box as well as some of the best powder I've tried!

He was kind enough to include some family freindly peppers as well as some scorchers!
The Chiltepin Amarillo are out of this world! The white tiny habs are about Datil level heat with a great taste I hadn't had before. Of course my new favories are the bonnets. The Burgundy and not so chocolate aren't near as perfect in the picture as they are on the plate. They taste delicious!!Everything arrived safe and sound and man was the box packed FULL!

If you get a chance to pick one of these up before the end of the season, go for it. You won't be dissapointed!!!

Nice! And pleeeease work on your photog skeels.

Glad you are enjoying and happy birthday weekend! I really wish I knew what my bonnets from last year crossed with to make the bottom left pods. They are one of my favorites this season, very fruity and HOT!

Got pods from Joyner's, as well. First rate.
Upvote 0 Downvote

Chris totally hooked me up! Like chewi said, the box was packed full and he threw in a free sample of powder besides. ALL of the pods were picture perfect, great size and ripeness, nice and shiny! Chris you are one guy I definitely will order from again, and most likely some powder over the winter when I run out of peppers!
Upvote 0 Downvote

Ok so I have never purchased anything from Chris, but I won a giveaway and was so happy that I wanted to post this. 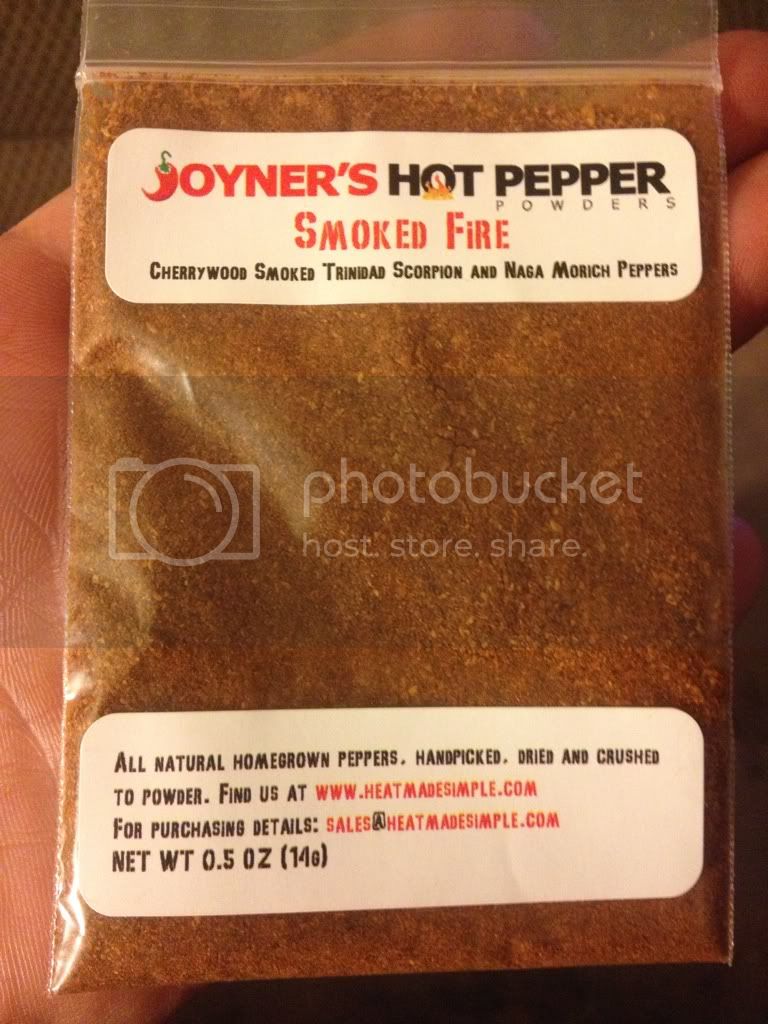 What really impressed me was how professional everything was. From the packaging to the product itself, this was top quality. If this is the level of quality I received without being a paying customer, I will definitely be a repeat buyer. Thanks Chris.
Upvote 0 Downvote

My first order from Joyners just arrived in the mail. To give a bit of context for this review, I thought his powders looked great when I saw pictures in other parts of this forum, so I asked Chris if shipping to Canada would be possible. It took a bit of time to tweak his online purchasing setup, but it all came together in the end. The shipping time to Canada took two weeks from the date it was sent, which is pretty much the same as it is for seed orders (Canada Post sucks with this stuff, but I digress). Everything was well packaged and arrived safely. When I opened up the box I could instantly smell the powders, and my mouth started watering right away. Not surprisingly, the smoked powders were the best smelling coming out of the box.

This was my order My first impression was that it was all very professional looking, and I figured that if it tastes as good as it all smells I am going to really enjoy these powders. The only downside was that there were no samples of other things included. While I certainly do not expect free full packs of powders considering how labour insive they are to produce, I do personally appreciate small samplers of other powders etc because it helps me figure out what I want to order next time. This is a minor point because I put together a pretty good selection of powders to begin with.

The second half of my review will appear in the next few days as I start to use the powders. As wonderful as packaging and shipping times are, getting quality powders is the thing that matters most in the end. Considering how great they all smell, I'm confident that it will be a matter of just how good they are rather than figuring out whether they are worth the money. I'm planning to devote a part of this weekend to trying a few of the powders I bought from Joyner's out, and I'll put up some pics and thoughts once that is done.
Upvote 0 Downvote

This is the second half of my review.

I tried Joyne's powders in two very different ways today to get a feel for the overall taste. First I tried some of the smoked jalapeno and smoked fire on a slice of pizza. The smoked jalapeno had a very nice taste, and I especially enjoyed licking my lips after having a few bites. My wife and stepdaughter were both able to handle it, which makes it especially useful in a household where everyone has different heat tolerances. Definitely a keeper, and I would order it again in a heartbeat. The smoked fire was much much hotter, and I was the only one who was able to handle it. But the taste came through more clearly to me, and I personally enjoyed it even more than the smoked jalepeno.


Next I decided to make some bourbon spiced apple butter, recipe courtesy of Rocketman's glog. For this recipe I substituted the naga morich for the fatalii mix that Rocketman used. I have to say that the naga morich powder surprised me. When I tasted the apple butter it was sort of like having the fresh taste of apple for a microsecond, and then being lifted up by the nostrils and then kicked in the nads a few times. This is exactly what I want from a naga morich powder, and it instantly became my favourite out of everything I ordered.

To close out my review, the shipping was excellent and the taste of the powders was exactly what I was hoping for. I will definitely be ordering from Joyner's again, and I definitely recommend his powders.
Upvote 0 Downvote

Thank you for the feedback and I am glad we worked out the order process and shipping turned out to be perfectly fine.
Upvote 0 Downvote

Arrived this afternoon, in good shape ... Looking forward to checking them all out in future meals ... and I think there's a couple of extras in there to try, too!

Glad everything arrived, looking forward to the feedback!
Upvote 0 Downvote

got a sample pack for the holiday break and man there is just too much to choose from! First taste was the Chiltepin Amarillo (thanks for including one of my favorites from 2012) and it is just as tasty as the fresh peppers. Also in this batch were a couple of "wife friendly" varieties that I am no doubt going to plunder when "mine" start to run low haha! Almost forgot, also got the mystery wine powder too. To top it off there is a dried pod I'm going to have to use in some way. Never used one before. Jays red ghost scorp, going to be killer! JHP comes through again!
Upvote 0 Downvote Hi, i would like to add to this. i purchased some seeds from Chris a while back the seeds came in pretty quick there are in great shape and to my surprise was the extras he threw in, some samples of the powders and extra seeds

.. i wasnt expecting that. i have a new addicted for super hot powders lol... I Highly recommend Joyner's hot peppers. Thanks again Chris.

Did not realize he sold seeds, in this this thread http://thehotpepper....__fromsearch__1 he said he was not a "seed source"

" I am also not a seed source, rarely sell fresh pods and only do powders where the names are clearly labeled of the contents"
Upvote 0 Downvote

Armac what exactly is your point. Besides just being a dick
Upvote 0 Downvote

armac said:
Did not realize he sold seeds, in this this thread http://thehotpepper....__fromsearch__1 he said he was not a "seed source"

" I am also not a seed source, rarely sell fresh pods and only do powders where the names are clearly labeled of the contents"
Click to expand...

I have said I rarely sell seeds, I am not a seed source first and foremost but when people ask me if they can buy seeds for something I grew and it is well known, why not fulfill their request when possible. I mainly deal with powders only but I have also sold fresh pods based on how many people have asked privately.

Tons of wonderful people and vendors have sent me seeds, (you and I have traded) but my main practice remains powders for now. If asked, I will sell seeds and fresh pods but that is not my main focus.

Having said all that, I might use some of my uncles 8 - 10 acre farm and plant a single variety solely for isolation and seeds.


Sali said:
Hi, i would like to add to this. i purchased some seeds from Chris a while back the seeds came in pretty quick there are in great shape and to my surprise was the extras he threw in, some samples of the powders and extra seeds

.. i wasnt expecting that. i have a new addicted for super hot powders lol... I Highly recommend Joyner's hot peppers. Thanks again Chris.

You are most welcome, I hope your growing season is awesome and each seed grows true! Looking forward to your feedback as always.

I haven't purchased from Chris, but I did receive some powders from him & was extremely impressed with how tight looking the packaging/labeling was - as has been mentioned by others, it's very professional looking!

I've only yet tried the "tri-Thai" powder - had it on pizza, and also on a piece of roasted chicken. It is really yummy stuff! I'm excited to try the other samples, and would absolutely purchase from Joyner's in the future. Solid vendor all around.
Upvote 0 Downvote

I have purchased from Chris and what a great experience, will do buisness again. http://youtu.be/iKYaqNljeNU
Upvote 0 Downvote
You must log in or register to reply here.