Between a few packaging misshaps and falling ill halfway through, this was a fun one to review...
Still, it's up on my blog now, or here for your ease of perusal:

Happy tuesday again, everyone.
About a week ago, I received another free sample package, this time from The Hot Pepper Company (not to be confused with The Chilli Pepper Company). Inside was a single, very hot sauce, looking a little like this:


In fact, I didn't even need to see it to know how hot it was because, the moment I opened that cardboard box, I could feel it in the air. Some of the sauce had leaked and vapourised. I was coughing uncontrollably for a good few minutes.

But I can't blame The Hot Pepper Company for that. They had packaged it as thoroughly as possible, with enough bubble-wrap to make the whole unboxing process somewhat more challenging than normal.
No, if anyone is at fault here, it is oQuintal, the makers of this sauce and the ones who decided on the bottle for it. A bottle with a nice little flip top like so: 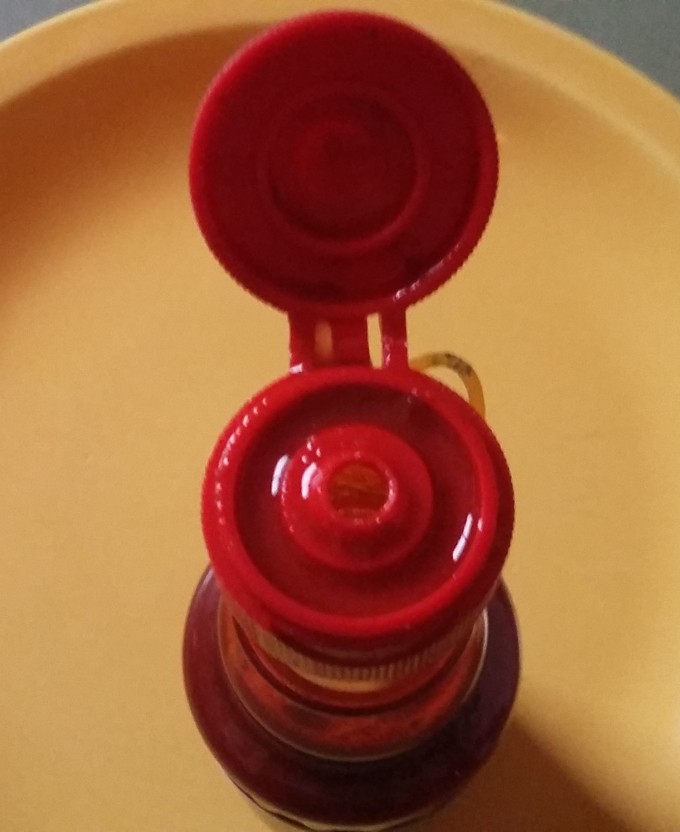 Allowing you to drop on the thin sauce inside like a far stronger Tabasco.

Except the lid didn't come like this. To make that hole, it was necessary for me to take a knife to the thin plastic.
Because of that, there is now a gap between the top and bottom segments of the lid that fills up when you shake the bottle. Something you have to do every time because this sauce separates easily. Something that will leave you with scorpion chilli residue all over your hands after every meal.

Of course, the product came without instructions or, if it did have any, they were on the ruined mini-pamphlet attached to those rubber bands. For all I know, there may have been a better way to get into it that I didn't spot.
Regardless, though, this bottle seems like poor design. Unlike its labelling.

The label of this product comes in a wide variety of greens, all used to offset the red of the chilli and its red and yellow name, as well as loosely hinting at the fact that the producers are also the growers.
The name of the sauce, “Devil's Choice”, then resides on a dark green banner bellow the scorpion chilli name, its text rather plain and white, much like the small pieces of informative text 'round the sides.
And, beneath this name, we have a tiny pair of flaming chillies being stabbed with pitchforks, ramming home the satanic theming without detracting too much from the simplicity of it all.
A simplicity that speaks volumes about the contents.

You see, this is a very simple sauce, designed to focus on the fearsome flavour and burn of its signature ingredient. oQuintal's own grown trinidad scorpion peppers.

Because that's who oQuintal are. Not sauce makers but growers and sellers of the hottest chillies in portugal, merely splashing out into the sauce market as a means to get their peppers out there.

But they've still done a little more than just make another first ingredient scorpion sauce. They've done their research, found out what sauces people like and attempted to combine them into perfection.
The Hot Pepper Company even describes it has having all the best qualities of both Tabasco and Sriracha. But maybe we should find out for ourselves. 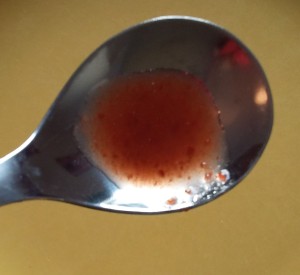 It's certainly thin like Tabasco but, as you should be able to see on that spoon, it also has that really fine chilli graininess of Sriracha, giving it a little more substance but not stopping it from feeling smooth.
But, before I even notice the flavour, the heat really kicks me in the front of the mouth, then works its way swiftly to the throat.

Unlike any other scorpion sauce I've tried, oQuintal's Devil's Choice has all the sudden punchiness of a good scotch bonnet sauce, only with a hell of a lot more heat. Starting at a seven out of ten on my scale, this sauce then ramps up fast and reaches the very bottom of an

Roughly double what I'd give the very hottest of those scotch bonnet scorchers and well in excess of even ghost pepper products but still not the highest a trinidad scorpion sauce can go.

No, if you want the hottest nature has to offer, this isn't it but I've found that some crazy heat seekers would actually much prefer the punchiest. The one with the biggest instant kick. If that sounds like you then this is going to be your sauce!

But there is, of course, much more to a sauce than just the heat and, as its attempts to combine the taste of both Tabasco and Sriracha imply, this sauces certainly isn't forsaking flavour for fire.
Not that it actually tastes like either.

Both the tabasco chilli and the red jalapeño used in most Srirachas have a certain fruitiness to them that makes them taste completely unlike the trinidad scorpion. The trinidad scorpion is often described as fruity but it is, to me at least, a harsh, acidic, orangey fruitiness. I don't often like it when it takes centre stage but the chilli does have its uses and this sauce makes it work.

This sauce makes it work in several ways, the first of which is fermentation. By ageing the scorpion in the same manner that McIlhenny Co and Hoy Fong Foods use for their chillies, it picks up a little added depth of flavour while loosing some of that harsher front end.

Then, they've reduced the vinegar compared to Tabasco. The acidic flavour provided by the scorpion itself makes more than the required amount for shelf life detrimental to the taste. You can't tell unless you know the scorpion pepper well but there's actually more water than vinegar in this sauce.

And finally, Devil's Choice uses the sugar you find in sriracha to take the edge off any unwanted tartness. Not enough to make it sweet and certainly not enough for a sweet and sour taste, but enough to balance out the chilli and vinegar a bit.

But, as said, this isn't just scorpion Tabasco. That might be the biggest part of the flavour but the garlic from its sriracha side also comes through strong behind the fearsome heat and flavour of the chilli itself, working surprisingly well with the second place record holder.

Honestly, I can't fault this sauce. The bottle was a mistake but the actual product inside is an excellent simple showcase of what one particular chilli can do. And yet, while it makes that chilli the forefront flavour, it doesn't make it the be all and end all of the sauce.

This is a more or less all purpose product, pairing decently with most meals that need a few extra drops of fire, but it will probably go particularly well with strong flavoured dark meats or chinese dishes.

[SIZE=medium]If you would like a bottle of your own, this product is unfortunately not available on The Hot Pepper Company's website but, since they do stock it, I'm sure they'd be happy to sell you this sauce on request. Just let them know I sent you.[/SIZE]
You must log in or register to reply here.