I ordered my first season's seeds from pepper joe a while back. He has a small selection that he grows out each year. He will send you seeds in little coin envelopes and always sends some free varieties with each order. I had excellent germination rates from all of his seed with the exception of one variety that I ordered. Considering how it was my first season and I was germinating OUTDOORS in soil (dumb dumb dumb) I was very pleased with the germ rates and I assume most of my problem seed was due to poor growing skills in my first season. I also germinated two more of his seeds the next season that had been stored in a drawer for a year, and both germinated.

I will say that he has a higher rate of hybrids than most growers. I'm not sure how he isolates his plants if at all but I've gotten hybrids from him. I also reallllly wish he would post more pictures of his pods because it's really hard to tell what you're going to get. My Bhut Jolokia seeds that I got from him didn't get a chance to fruit the first year, but the second year the plant I grew out ended up not being a true Bhut. I'm not sure if it was a hybrid or what, because it had a pointed shape that looks like a lot of the smaller bhuts I see on the web and definitely had C. chinenses genetics, but it was nothing like the large, wrinkled, superhots you see coming out of the NMCPI. Also probably around hab heat or slightly above, not superhot. I'll post pics on request.

Overall I'd say he's a good source for novice growers but I wouldn't recommend him if you're trying to get superhots and such. There are more reputable sources out there. Overall probably a C+/B-
Sort by date Sort by votes

I'm sure Pepper Joe will respond to this thread and offer to replace any seeds that you are unsatisfied with.

Joe is that kind of a guy and he does his level best to rectify any problems that arise with his seeds and sends out replacements promptly to keep his customers satisfied.

i'm not pepper joe from pepperjoe.com and he is not on this forum from what i know of, also you should know he does not grow all his own seeds he has test gardens out there that he has people growing and supplying him each season, so i suggest you contact him or sylvia at their website, and in no way are any of his seeds isolated i bought ghost peppers from him this year also and nothing came out of them plants,the plants inside and outside both failed to produce pollen so 10 out of 10 plants nothing pretty odd i could understand the plants inside but all of the plants out side? should not of happened,plants where 4-5ft tall and spread out 3-4ft wide healthy as hell, but now dead i chop em' down and replanted with seeds from refining chili peppers, if you contact him he will replace them
Upvote 0 Downvote

He is active on this site. Here's his profile link: http://www.thehotpepper.com/user/3762-pepperjoe/

I ordered some seeds from him that did not germinate. He promptly replaced them.
Upvote 0 Downvote

hmm- food for thought...I wondered if it was the same entity also.I got some from THE pepperjoe as well .Most of the Giant Bhuts were a bit larger then average, one inparticular threw some 4 inchers-bigger meant fewer though.Best bet is to contact him and ask.Most of my germination probs were self induced-he he-overcare 101!!!
Upvote 0 Downvote
J

It might just be a case of unreliable sources for him. I saw a post he just made looking for bulk, Trinidad Scorpion seeds.

Depending on the source he gets them from it might not be reliable.


Sometimes buyers will buy seed in bulk but it will bite them in the butt when it comes to customer service for them.
as a seller I try to 100% isolate seeds and only sell seed that I have grown out in a large quantity myself to test. Always look on the forum for known good sellers 1st.

Its a pain to go through a season of growing and find out that the seeds are not true, or they are not as advertised.

I'm sure hes a good seller and I have read rave reviews about his seeds, so it could be a bad batch of the ones you got.


I would just simply message him and explain and ask for a refund. In the future, find a good plant, and keep saving seeds from it, and you will never need to buy seed again.
Upvote 0 Downvote

I've been meaning to write my on PepperJoe review, but haven't gotten around to it (Sorry Joe it's coming I promise). I will say however that out of the 5 varieties I planted (none were superhots) my germination rates were VERY high and everything grew true. As others have said he is very responsive and I'm sure he'll have no problem getting back to you.
Upvote 0 Downvote

I ordered from Joe, and though I had a good season and harvested many beautiful peppers, mine were not Bhut Jolokia.

To his credit though, I had eight seedlings out of the eleven "Bhut" seeds I got sprout and grow. The peter peppers did well.
Upvote 0 Downvote

I had mixed success with the "box of fire".
The germination rates were poor - I'm not a noob and know how to grow peppers from seeds. The white Habaneros didn't sprout at all and I got marginal success from the rest (~ 10-30%). The bhut's looked pure, but the caribbean/tasmanian/pumpkin habaneros looked all the same. Those that grew did produce decent yields. The "charleston" pepper has no heat or flavor and the Black Jalapenos were pretty mild.
I will order from Hippy, Judy or buy from fellow members in the future.

After researching a weird looking ghostly green habanero, it seems I have received a elusive Giant White Habanero seed that did germinate and produce. I found the pics on Refining Fire's website. Neat plant and even neater pepper. I am over-wintering the plant so I can isolate for next yeat and keep the strain "pure". I may have been a little harsh in my first assessment - the plants that did produce were very prolific. I will take more care when germinating next years seeds.
Upvote 0 Downvote

I have ordered from him serveral times, and my ghost peppers didnt really produce much, his cayenne blend (suppose to be different colors) were all red, but did get a replacement back. They white hab's never germinated either. His jamican red peper that he sells exploded. I had gotten so many peppers off that plant i ended up cutting it down cause I didnt have much room to store them.

Overall I am happy with him, and would order again myself.
Upvote 0 Downvote

Joshuap2000 said:
I have ordered from him serveral times, and my ghost peppers didnt really produce much, his cayenne blend (suppose to be different colors) were all red, but did get a replacement back. They white hab's never germinated either. His jamican red peper that he sells exploded. I had gotten so many peppers off that plant i ended up cutting it down cause I didnt have much room to store them.

Overall I am happy with him, and would order again myself.
Click to expand...

My white habs that I got from him didn't germinate either.
Upvote 0 Downvote
T

Edgie said:
My white habs that I got from him didn't germinate either.
Click to expand...

Neither did mine! and that was almost 2 years ago. Make it known that pepperjoe's white habs are bunk.
Upvote 0 Downvote

I ordered from PepperJoe.
I got good germ rates on all that i ordered and the freebies.
His Jamaican Red peppers are an absolute work horse like mentioned above. and very tasty my fave hab ive tryed.
I have a Bhut Jolokia with 18 peppers on it germed in may i believe.

He has always been very friendly and seems like a smart guy!
plus he loves to fish! and thats ok in my book haha 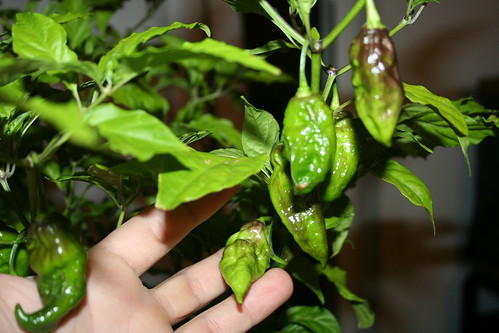 I have ordered bhut jolokia seeds from him 2 times this year germination rates have been good nice healthy plants I like his dirt...have not flowered yet but the lighting inside is not ideal yet....
Upvote 0 Downvote

I have been very careful to do my research when it comes to buying seeds. For example, when I became interested in ghost peppers, I looked for the source of the Guiness test results and bought my seeds from NMSU. I did the same thing when it came to the Trinidad Scorpion and bought from thehippyseedco. Otherwise, if I am randomly searching, I look for sites that include the species name because I want to know that they are knowledgeable. I have never personally bought from pepper Joe, but I have looked through his site.
Upvote 0 Downvote

i ordered from him for my bhuts last year. some of the seeds were bhut while others were dorset.

i also ordered scotch bonnets from him and they turned out to be caribbean red habanero.

having good germination rates with his bhuts, but not sure if they are actually bhuts yet because they are justs sprouts with a few true leaves, not having great germination rates with the Charleston cayenne peppers though looking like 1 out of 6..... and no luck with white habs either!
Upvote 0 Downvote
You must log in or register to reply here.
New Posts