I thought it's about time I started this season. It's been an uncharacteristically sustained period of below freezing temps at night over the last month which has definitely killed all chilli plants that I grew last year. When it warms up a little, I will have to go out and clean everything up in preparation for this year.

So this time I thought I'd be extra lazy and bought these 100 seed rockwool trays rather than the 1"cubes I usually use. Two lots in a 1020 tray gives me 200 seeds with the hope of getting 30 or so plants. It's sitting on the heating mat set to 85F with the dome on and no lights for the moment. The plan is to fish them out once they pop and go straight to net pots or soil (assuming the weather behaves).

As a reaction to last years lack of super hots, I have gone Chinense heavy this year.

From left to right, the first lot of seeds are from WHP:
The second lot are mainly from Texas Hot Peppers and others
10 seeds of each variety other than Kandy where there were only 7 in the pack. Let's see how this works. Given my long growing season, if this is an abject failure then I'll go back to more tried and tested starting procedures in March.
Last edited: Feb 14, 2022
Click to expand...

Extreme Member
Let me be the first to welcome you
to glogosphere 2022, @Siv!

Great choice of peppers, I also have the yellow mama from WHP, so will be neat to see what I’m missing out on

Good luck to you even though you have previously shown that you don’t need it!

Good luck Siv! Are you doing hydro this year?

Yes definitely. Sticking to the same setup as this year, about 16 buckets pushed a foot back from the first time. We’ll see if I get monsters or the shorter growth that I got last year.

Extreme Member
We have some progress! Bombay Morich and White Hab in the lead with almost all seeds popping. 7/20 varieties have no signs of life yet. 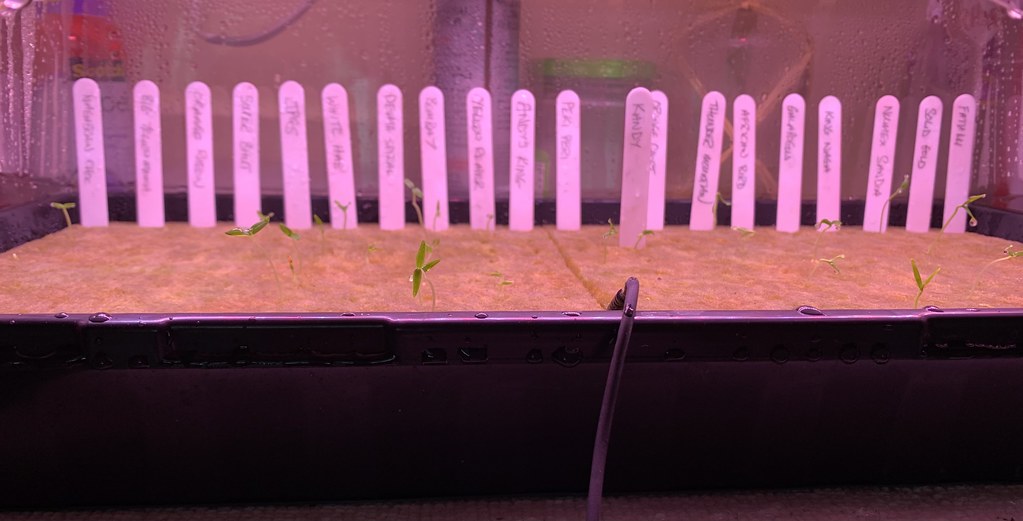 Extreme Member
Alright, @Siv - nothing like the sense of relief
when those little green heads start lifting up
out of the germinator plugs!

Onward and Upward!
Every Pod a Victory! Life Force is Strong! \O__
Links to all my grow logs here.

Extreme Member
As usual, I got lazy. And it had consequences...

I had an excellent germination this year with I would estimate 80% success rate which is excellent. My little starting tray was awash with seedlings. So I started transferring two of each variety into my window hydro so get them under some better lights and nutrients. They were pretty happy there and the majority grew gangbusters: But I totally forgot about the seedling tray and they dried up and I lost all the rest. Very sad as I was hoping to have a pretty big set this year. Now I'll have to make do with that's in the picture above. Rather annoying as I lost a couple more but still 24 healthy plants to get outside. I'll spare you from a photo of the disaster - it's far too sorry a sight.

So I decided that I'll go 100% soil this time. I'm planning on spending a couple months away this summer and hydro likely won't survive that without attention (I can keep them wet which has been a failure in the past but have no automation for adding nutrients). So the plant out had begun. Extreme Member
Those transplants should really take off
with those awesome root systems!
Every Pod a Victory! Life Force is Strong! \O__
Links to all my grow logs here.

Extreme Member
+1, Unc!
Every Pod a Victory! Life Force is Strong! \O__
Links to all my grow logs here.

Extreme Member
I've been slack in updates and now we're into the stupid hot season in Houston with temps above 100 every day. In terms of infrastructure I've updated the watering system with a 3/4" main line from the timer so now there's 3/4" main line, 1/2" branch lines to each of the raised beds and 1/4" to each plant.

Everything is in the raised beds now, some are looking good. This one is looking pretty good as it gets the most shade and things still look alive. This is my old "wilds" bed and there are many weeds that I'm struggling to contend with. I'm pulling as many as I can but they're tough to control. This bed had no plants in last year so is relatively weed free. It gets the most sun so I have reinstalled the shade cloth. And finally this bed has onions and chives still growing from last year so I've put a few plants in there but there is a ton of grass growing in there too. I've since pulled out as much as I can but we'll see how it goes. I'm now heading off on holidays so the watering is set for 30 mins a day and I'll see what I come back to!

Hopefully you come back to a jungle of peppers!

Extreme Member
Enjoy your holiday, Siv! Let the peppers keep working while you take it easy for a while.
Current Grow Log - CaneDog 2022 Glog
You must log in or register to reply here.