Extreme Member
Still waiting on PeppaDew and MustardGum NagaBrain.. And have a lot of other peppers still ripening inside. These Peruvian Baccatum I was going to cull, and so happy I didn't. It seems I'm having a completely different experience with these than I've had with other Baccatum inside. I gimped this one pretty bad, and it's coming back around.
( The other's are holding up well too, but very slow growing.. I'll be happy if they just pull thru to next season. That kind of put them a step up from LemonDrop for me.. New favorite Baccatum, but I'm going a little more wild this year.. Especially if I can get a hold of CP 203. Both the PeppaDews are holding up well too, and the PeppaPeach is well on the way to recovery.

DeSeda flowered, then the cat hit it with the blinds and guess which branch I lost.. At least it's still kicking. DeSorta keeps putting on pods and we get to enjoy one about every week or so.. Really enjoy them.

Got the first volunteer Elderberry seedling, from the Mother I cloned, out of the driveway finally.. At least what it offered for the taking this year. It'll be interesting to see how long it persists there, if I keep on cutting off the yearlings. After the horrible results I had trying to air layer peppers with these clamshell folders, I was surprised how well they worked for the Sambucus.. Maybe I'll try again, indoors, with the peppers. 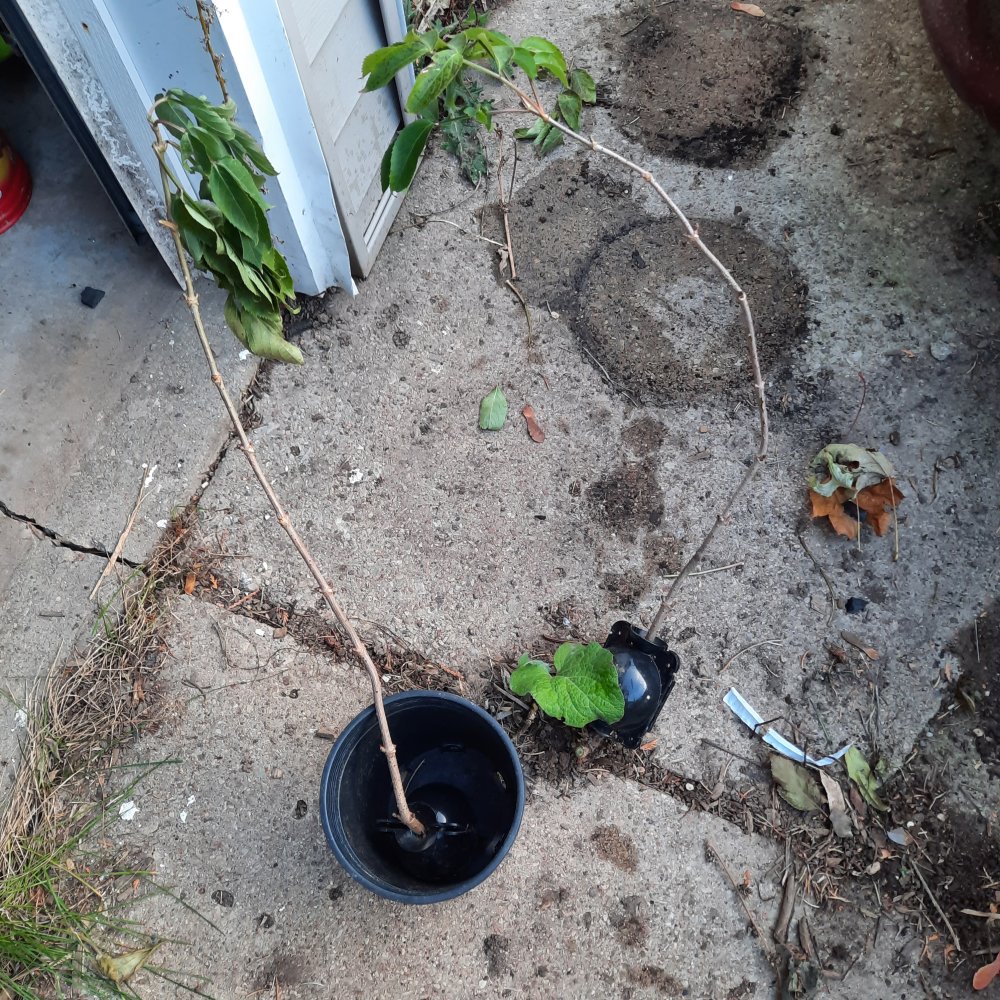 This one had at least four new shoots starting already.. I think I might plant one tomorrow and let the other sit in a pot overwinter. 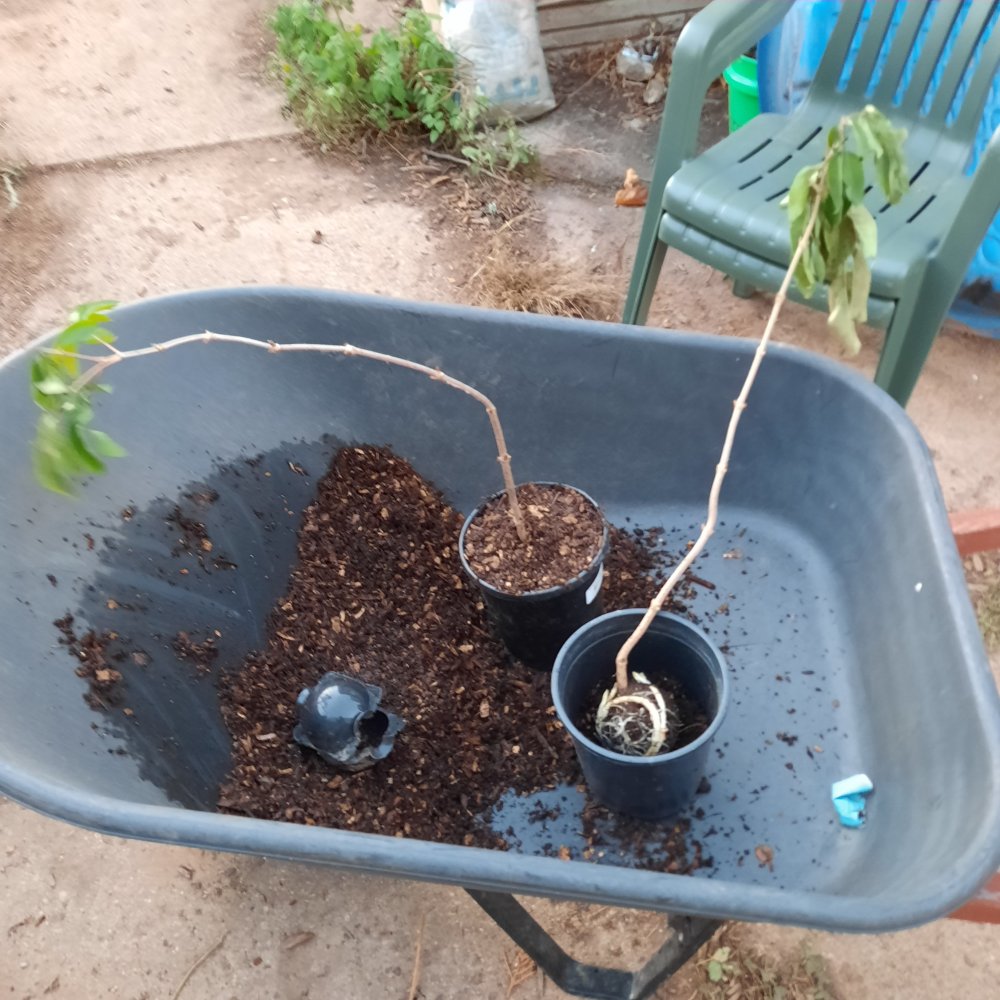 Seed of the varieties I grew this year are dried or drying.. For anyone interested. I think I'm already caught up on those who were waiting on seeds from me, but let me know if I haven't, because I'm forgot about them somehow.

Extreme Member
Cool looking rooting on the aji, CF. I have a bunch of pods on my small de sorta that I should be harvesting soon. Hope there as good as the ones you're getting.
Current Grow Log - CaneDog 2022 Glog

CaneDog said:
Cool looking rooting on the aji, CF. I have a bunch of pods on my small de sorta that I should be harvesting soon. Hope there as good as the ones you're getting.
Click to expand...

Thanks.. Hopefully it survives! My Padron aren't doing as well.
You know, I'm no authority to compare their flavor to other Pubes, but they've been a treat for us. I'm planning on starting another Pube when I do the next germination round, but I think I'm going with Edmick's mini-red that I found 2 seeds for, on the train.. I can still taste that brown one when I think about it..
I've got a couple of these Peach Volante X that have that flavor, it's too bad one of them is the hottest of all of them. Really torn on whether to continue it, for heat's sake.. Hoping the flavor rolls out better on the 3rd gen. Not sure what the odds of that is. Probably not going to happen. I tried them at all stages and they go from bitter to nasty hot.. Far hotter than the others
Here it is.. I think the pods start out lime. 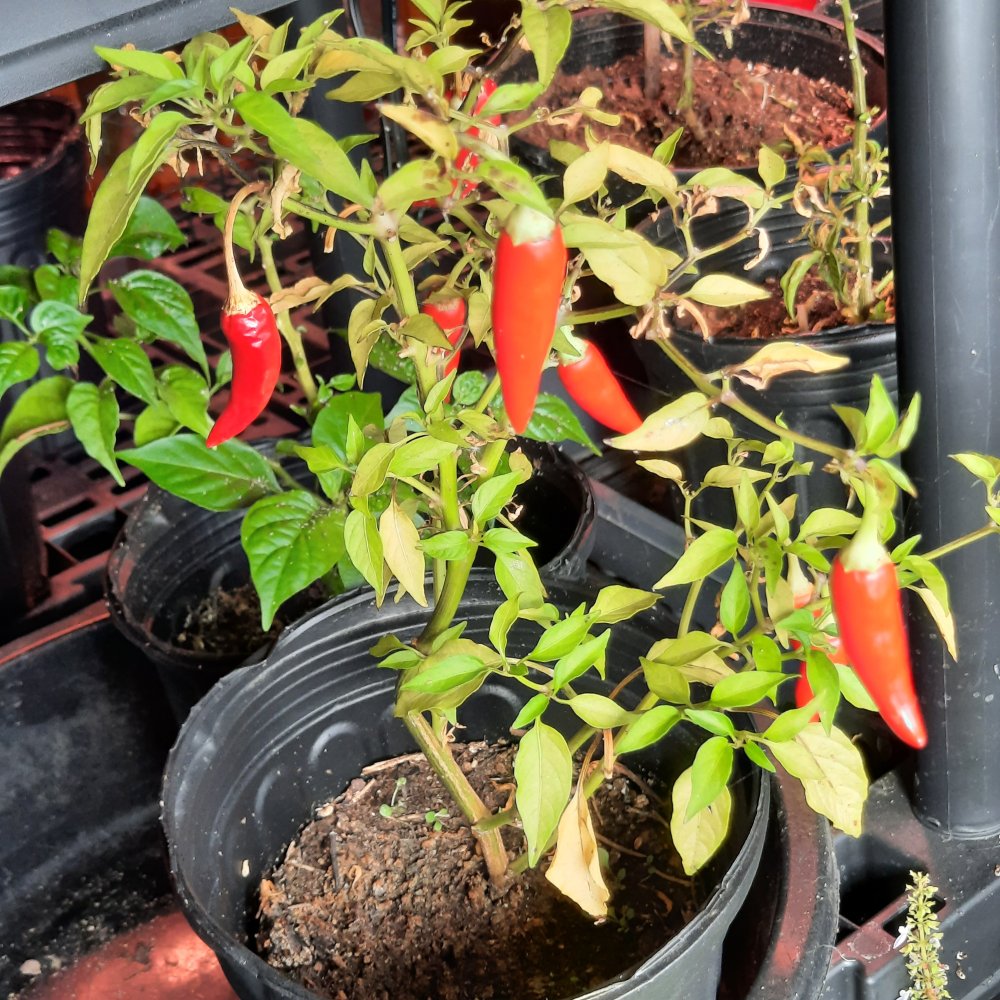 Extreme Member
Wow.. Has it been a month already? Time just keeps slipping away. Now that I have all my seed lust taken care of for the next season, I can focus on other important things.. Thanks to everyone who helped out with that! I think I took care of everyone, but please let me know if I missed someone.

Here's a few pictures of a predator that is new to me.. One of the Coenosiini Tribe. Shown on college ruled paper and then with fruit fly prey in tow. Nevermind the mess.. The beetles enjoy the buffet. At only about 4mm, they look a lot like a smallish housefly, until you really watch them a bit. They have a characteristic 'boxing' shuffle that is very reminiscent of the way Salticidae react to movement of other individuals, with a very erratic and spastic flight pattern that is nothing like the typical fruit flies hovering flight common in our house, but similar to other flies of their family. They attack fast and usually fly off and hide with the prey, so I've had little luck in getting video of it happening.. I'll keep trying though. They are very aware of humans, like most flies in their family.. Also very bold and unafraid of me. They are about as likely to roost on my finger as fly away when I put it up to them.. And generally keep whatever disposition they have about it, from my experience.

The majority of the aphids are gone now, and I find myself hiding and protecting them a little.. Trying to keep the wasp population alive. I worried about the fungal gnats being an issue with bringing in the compost buckets, but now I can see that was a comical concern.

I'm not certain what species of the Coenosiini Tribe I have.. But they are likely responsible for the elimination of the whiteflies in the greenroom before I could even track the source. I also have very few fungal gnats in that room currently. They prey on just about every type of fly I've had in there.. Whitefly, fruitflies(both), and Gnats(especially darkwings). They have done such a good job, I've had to bring in another compost bucket to supplement the prey species for them. I haven't seen them take any of the wasps or Orius yet, so here's hoping they all play nice. Since I keep finding juvenille Orius here and there, I'm not too concerned. The Coenosiini usually hunt on and around the window, and their interaction on the plants seems limited to waiting and ambushing others in flight. They are far too agile for the beetles to catch them, but the Salticidae and other spiders seem to be their weakness.

I am concerned that the larvae may be predating my red wigglers, as they are known to attack them, as well as fly larvae, in that state. Outside of that, it looks like I may just have the perfect OutsideIn mix now. For the record, I can attribute the compost bucket to the following effective beneficials:

-Hunter flies
-Tiny long-horned Fungal gnat wasp I have yet to identify
-At least one hoverfly species
-Rove Beetles(another predator of fungal gnats and flies)
-Predatory mites
-Orius (Yes, I also caught them in the bucket outside)

Did other stuff come in the buckets too? Of course! But the bad ones were already here, sans predators. I wouldn't rely on the bucket for establishing a population of Orius, but the potential was there. All the random extras provide great distractions for the Salticidae.

So, for those of you who doubt natural systems.. Enjoy this perspective. I was able to do this with very little expense to myself and the majority of management time spent spraying water mist, an occasional brushing of certain plants, and reading about those I wasn't informed about yet. So all of the huff and fluff about it being impossible without vast expenditures of time was, well.. Propaganda, like I've said before.

Before I ever earnestly began to explore the full potential of natural systems, I learned some hard lessons about chemicals that appear to be permanent.. Hopefully I can spare others from that. Now I've demonstrated to myself it can be done indoors, and without a lot of work.. Just a little compassion, understanding, and natural engineering. Did I lose some plants in the process.. You betcha! That is part of breeding strong genetic lines.. Isn't it?

Chemicals have been proven to be ineffective on the long-term, time after time.. That's a scientific fact, not to be confused with the tailored 'science' corporations like to tote as 'fact'. Use of chemicals leads to the use of more chemicals, and little else.. Most people do this without even weighing the cost because, even if they weren't ignorant to it, it is really hard to fathom the extent.. Especially when outside in a natural setting. No one selling chemicals is going to force or encourage you to know that stuff, and they may even lie about it if you ask them.

Something to chew on..

Hope everyone has a wonderful and safe holidays! Thanks for stopping by!
Last edited: Dec 20, 2021
Muta sicut vulpes
Public Capsicum Library Collection
You must log in or register to reply here.
New Posts

Tomatoes seedlings WAY too tall, can I trim tops until I can plant?
2