The wife got me something COOL

SO, My 6 year old son as I had some plans for a new green house and some bigger plans this year seeing as we were looking to move... Well the wife thwarted my plans in a very welcomed way... I shall explain.
A couple years ago, I had to sell my prized possession. My 2004 zx6r-636. Show room condition AMAZING bike. But I was out of work and we had bills and other expenses to take care of. SO the bike found a new home and I found some cash...
WELL, The wife decided to surprise me with a new bike this year, It isn't quite as nice as its predecessor, But its a beauty none the less. She got me a 2007 zx6r, so some of the plans we made will be moved off. I cant say I am at all angry or upset about it as I was wanting a new bike. She just beat me to it.
I figured I would share that here. Have a nice day everyone.

Photo bucket is being stupid right now how can I upload from my phone? Lol

That's not beneficial, I don't have life insurance

Blitz527 said:
That's not beneficial, I don't have life insurance
Click to expand...

She has a thing for the ER doc.

She has a thing for the ER doc.
Click to expand... 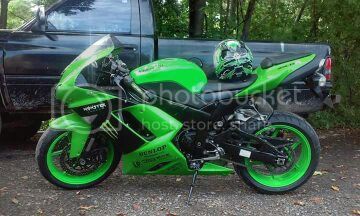 Blitz527 said:
That's not beneficial, I don't have life insurance
Click to expand...

Not that you know of.

CAPCOM said:
Not that you know of.
Click to expand...

Oh shit.... good point.... any way around that ?? HAHAHAHAHA Maybe ill carry a note that says
" If you're reading this, my wife has finally killed me, she has been trying for years but i guess it finally worked..."
And just because I'm an asshole, I'll end it with "By the way, I'm standing behind you"
You must log in or register to reply here.

O
Glad To Be Back

Any cellphone geeks in the room?

The loss of a great friend.
2