OK! As we get rolling on the next phase of this ongoing series of marginal successes and impressive failures, let's take stock.

Currently happy, healthy, and producing fruit:
Recently rooted via coffee filters and just planted in coir:
No hooks yet:
Below you have today's work. There are five seeds in each one, and all but a few have hooks, so the prospects seem pretty good for healthy plants, and probably extras for some more fruitless (mwahahaha) experiments besides. There's even a Sugar Rush Cream that put its cotys out before I even knew anything had happened, so that's an impressively ambitious little guy. We will watch his career with great interest. 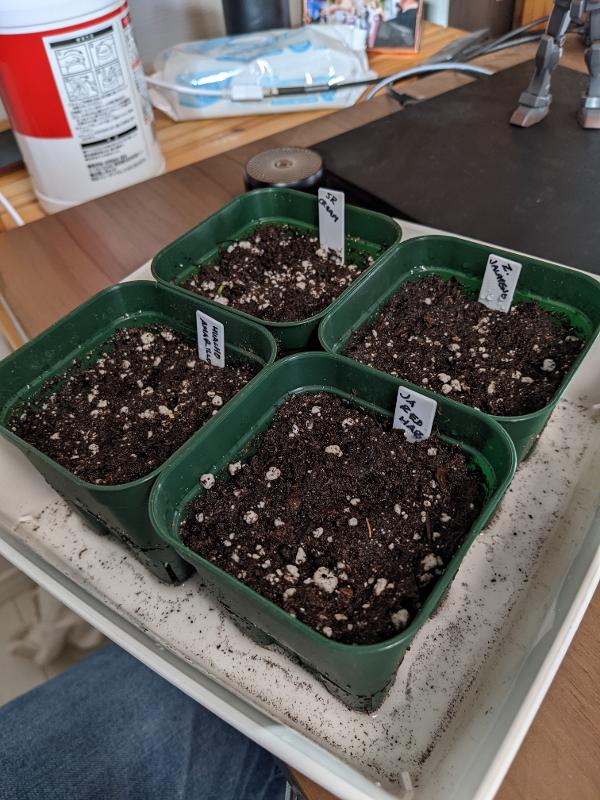 Yes, I know you can see my sexy leg in this picture. Control yourselves! I'm married!

I was expecting to wait longer for these seeds to get started, as all of them are several years old, but they've been very enthusiastic; I'm not concerned about the reapers yet, as those take forever to do anything, and I think the Caribe is one I've tried to sprout from this batch before and might just not be viable. But we'll see.

As is tradition, I'll leave you with a completely irrelevant photo. A friend of my wife's recently gave me my first Gundam model; here it is, in all of its 13-cm-tall glory. 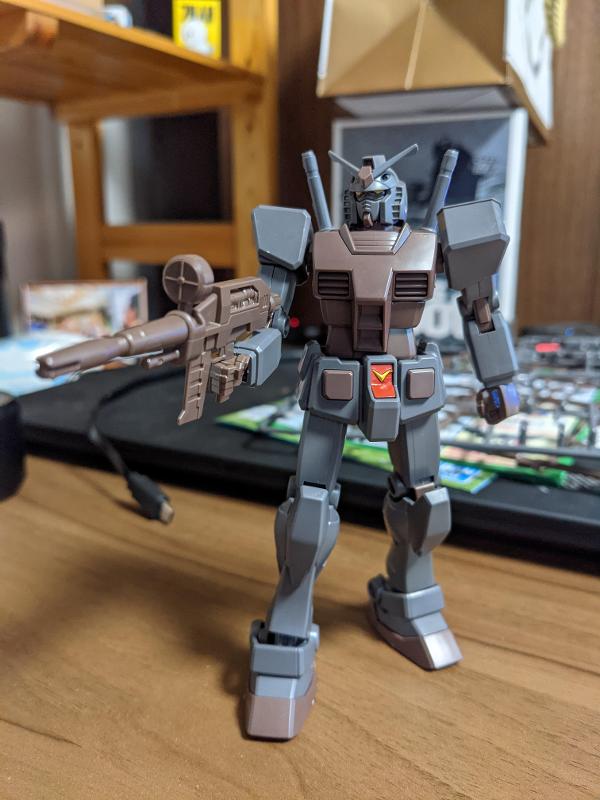 Extreme Member
Alright, the i-fish saga continues! Good luck in this
iteration, my friend!
Every Pod a Victory! Life Force is Strong! \O__
Links to all my grow logs here.

The new kids on the block are doing well! I'm particularly stoked about the three-coty JA red hab. 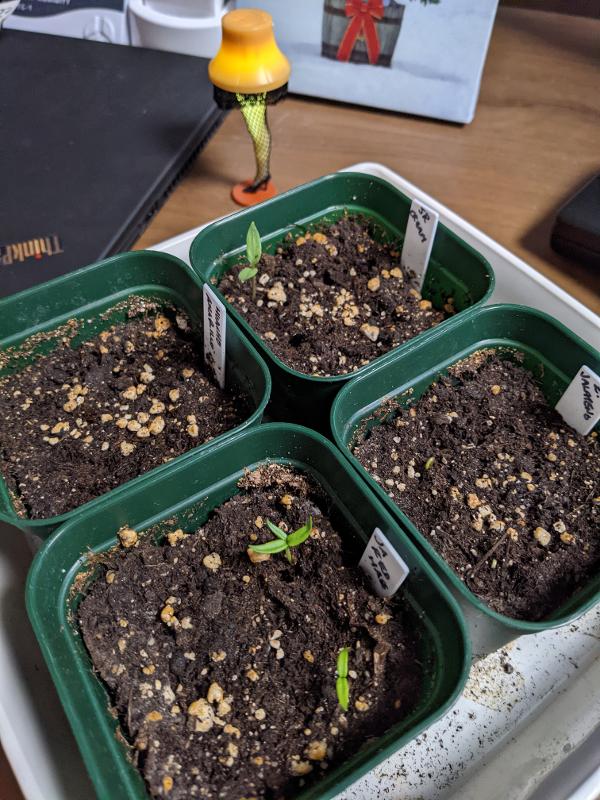 It's not that easy to see here, but there is a hook from the Zapotec jalapenos, and the SR cream is one I'm really hoping comes in well. To clarify, almost every seed in these actually did kick out roots, so I do expect at least three or four sprouts from each variety.

Happily, the remaining two varieties that are still in their coffee filters are also getting started: Caribe and the infamous Carolina Reaper. I'm seeing roots in at least three seeds in each one, so they'll get their own little planters tomorrow or early next week. So it seems like we may be en route to a pretty good 2022!

Today I used up the last of the hydro nutrients I've been employing for the last few years (not the same bottles, but the same type) and am going to be using General Hydroponics' Flora concoctions on this batch, when they reach the legal drinking age. I'm more than a little nervous about the change, but it seems like a pretty safe bet. If nothing else, as long as they don't somehow kill my Casados and SR Peach, I can't possibly be worse off than I am now.

To leave you with a thought: I don't know how many Thanksgiving turkeys were cooked in Tokyo this week, but the count is at least one. It came out a bit tough, but then this is not the kind of thing I usually cook -- and it's really just an excuse to make and consume a ton of gravy anyway, so I declare success. 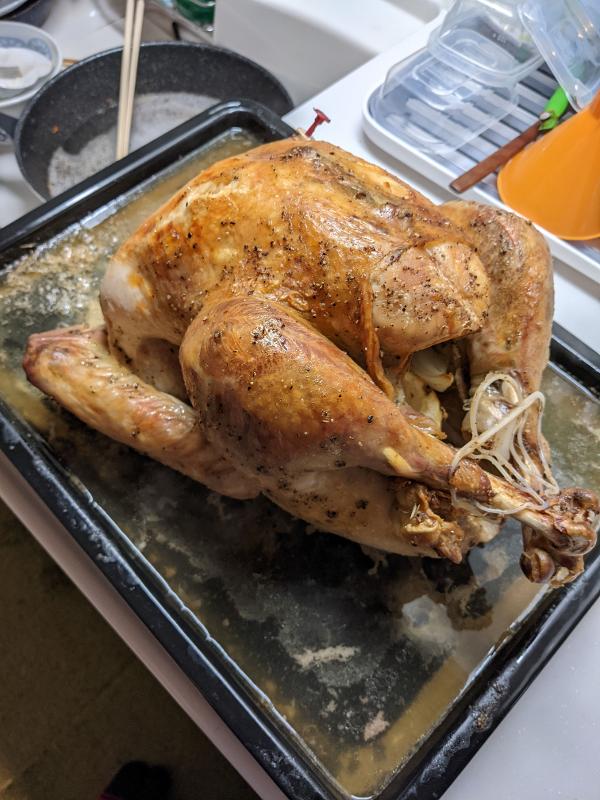 Extreme Member
The youngsters are looking spry @internationalfish lol. Must be the magic of the mini leg lamp, haha.

And you did Thanksgiving proud with that bird. Congrats!
Life is like a plate of superhots: What you do today will most likely burn your ass tomorrow.

Interesting that your JA Red Habanero has a tri-coty.
That is actually more common with those than any
other type I've grown. Also get some that fork at a
very early stage. Hoping those do well for you.

Have you and Alejandro got a seed request together, yet?
Every Pod a Victory! Life Force is Strong! \O__
Links to all my grow logs here.

Downriver said:
The youngsters are looking spry @internationalfish lol. Must be the magic of the mini leg lamp, haha.

And you did Thanksgiving proud with that bird. Congrats!
Click to expand...

Thanks! Haha, yep, it's a major award.

Interesting that your JA Red Habanero has a tri-coty.
That is actually more common with those than any
other type I've grown. Also get some that fork at a
very early stage. Hoping those do well for you.

Have you and Alejandro got a seed request together, yet?
Click to expand...

Got another hab that opened up; just two cotys this time, but it looks healthy. Also two hooks for the jalapeno, another for SR Cream, and a helmet poking out for the Huacho Amarillo. So things seem to be going well.

I don't think the seed thing is likely to work again; my parents have tried to send a couple things over, and they've been told they can't send any kind of food. If that's the case, chili powder seems unlikely to get through.

Last night, I got back from three days in Hokkaido (the northern island of Japan), which wasn't nearly as fun as it should've been, solely because of the people I went with. Which sucks. But the plants survived, and I did meed this lovely young gentleman. 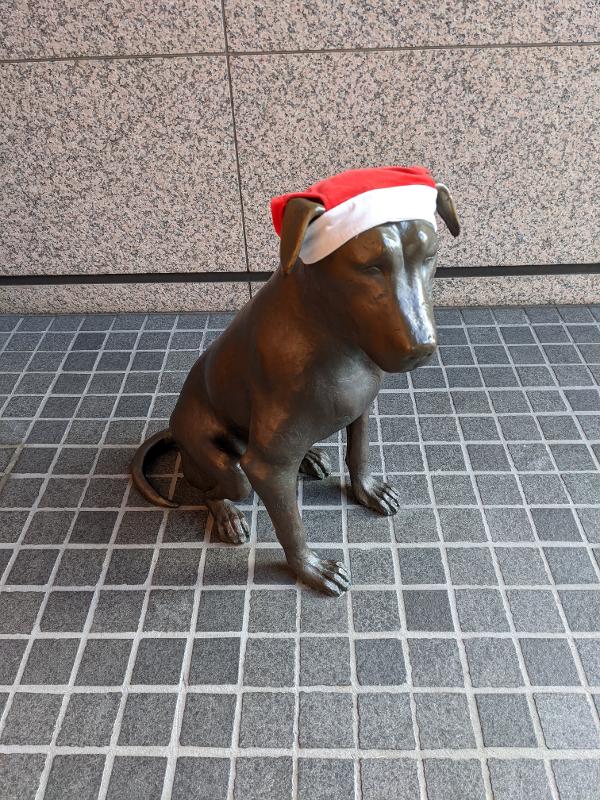 Also, the beer brand Sapporo is named for the city where we stayed, and they sell a local-only brew called Sapporo Classic. It's not bad, but it's not exactly a life-changing experience. Again, not bad at all, and I did enjoy it -- along with a chocolate-filled snack called Koala's March, proving once again that I am a 40-year-old child. 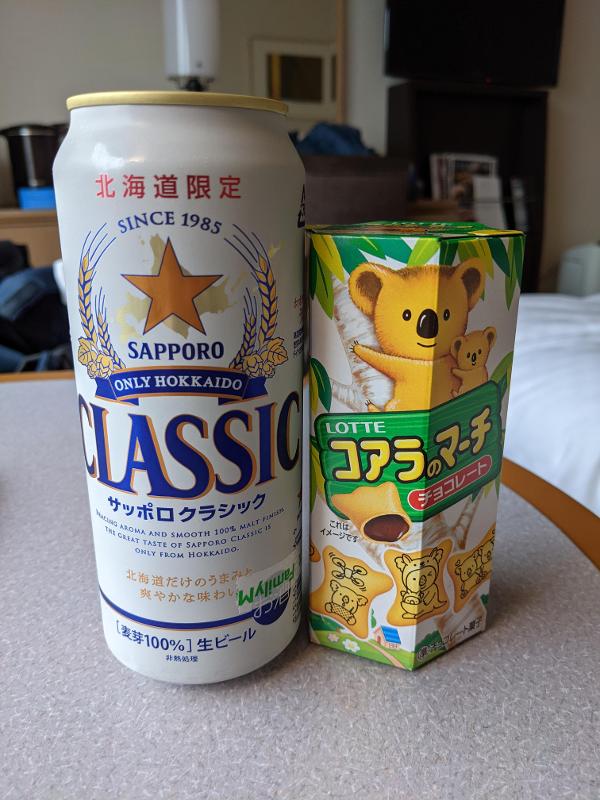 My sprouts survived, and I figured I might as well show them here, before the trip and upon return. 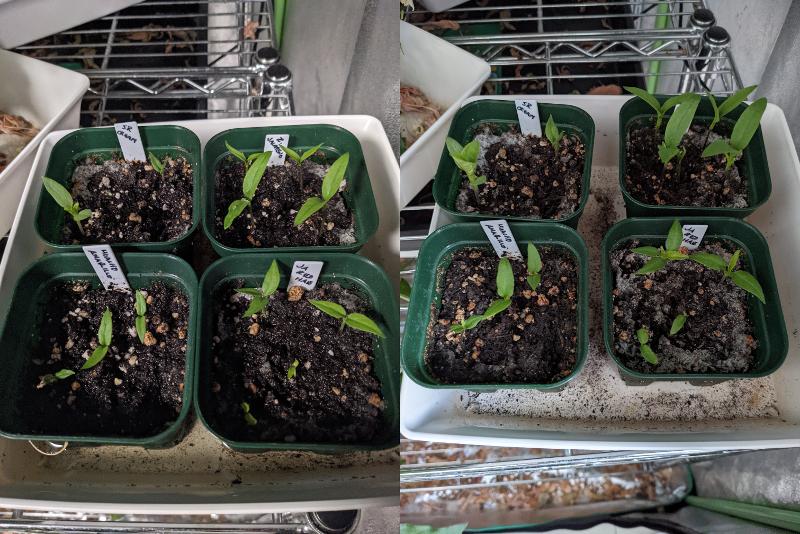 They're not exactly sprinting to the finish, but a few in there have true leaves, so that's a good start; that SR Cream in particular is probably going to get his own home today, as far ahead as he is. Not pictured here: Carolina Reapers and Caribe, both of which had at least one seed that had put out a root, but neither of which has produced a hook yet. Even if neither variety actually produces a plant, we'll still be in good shape, though.

I'll keep one of each, then likely two or three total for another (far smaller than previous) round of experimental Kratky failure, but the rest will go to my reverse pepper dealer, Alejandro, once they've grown up a bit.

Extreme Member
Starts are looking very nice, @internationalfish, I can
definitely see the growth over the time you were gone.
Looks like you are off to a great start! True leaves on
the JA Red Habanero!

Every Pod a Victory! Life Force is Strong! \O__
Links to all my grow logs here.
You must log in or register to reply here.
New Posts