Extreme Member
I've been reading about black soldier fly composting since it was mentioned recently in another thread.  Very interesting, but one thing I don't understand: how do you separate the usable compost from the ongoing process?  I've got a bin made for BSF, things are going well, I'm dropping in food scraps and other compostables daily, the larvae are doing their thing.. then what?  Seems some folks use the drained liquid produced, others are wary of it.  How do you get just the compost away from the horrible churning mass in the bin?
DARWI ODRADE for President campaign field officer

Staff Member
Moderator
Extreme Member
Ideally you would have multiple compost bins/piles in different stages of decomposition but if that's not feasible then adding to an existing compost pile is fine but it will take longer for the process to be "complete" because you're constantly adding fresh material. Having said that, the fact that the compost is already active with microbial life, the process of decomposition will be faster

I have no idea if this is the right way to do it, I've only had them one full season.  I have one large compost bin where I throw kitchen scraps and some yard debris in.  The BSF are in there munching away.  When that gets full, I'll separate the top of the compost where the BSF are and the unprocessed scraps, dump the mostly processed compost into another "finishing" bin that I rotate once a week.  Dump the unprocessed stuff and the BSF back into the original compost bin.  Repeat.

Extreme Member
I see.  The BSF life cycle stops once the material has been processed completely by the larvae as the gravid females no longer consider it a suitable site to lay.  So at least two bins/piles/whatever are advisable.  Or, you don't really separate the compost from the ongoing process.
DARWI ODRADE for President campaign field officer

Edmick said:
Ideally you would have multiple compost bins/piles in different stages of decomposition
Click to expand...

That's the idea with worms, but BSF are very different.  There is no "different" stages.  They literally eat EVERYTHING.
.
The big difference with BSF and worms, is that the BSF larvae will attempt to leave the container, when it's time to pupate.  And you really need to allow this, so that they can either be harvested (if you're feeding them to livestock), or so they can create the next generation.
.
BSF composting is a one-shot deal.  The liquid they produce can be overwhelming, and if you use a lot of fruits and veggies, it can be really thick and viscous.  My advice is to combine that with some oats, or other dry matter, and put it back in one more time.

Uncle_Eccoli said:
I see.  The BSF life cycle stops once the material has been processed completely by the larvae as the gravid females no longer consider it a suitable site to lay.  So at least two bins/piles/whatever are advisable.  Or, you don't really separate the compost from the ongoing process.
Click to expand...

I use a flowthrough type worm bin.  Because it was originally a worm bin.  But when the local lizard gang decimated my worm population, the BSF grubs took up residence.  About once a month, I put a double layer of cardboard down, to keep stuff from flowing so freely.  They eventually eat that, too.  If I'm being honest, though...  You can use a closed container with drainage, and it will work just fine.  If you have doubts about the suitability of the final product, put it up to age in another container for a few months.
.
In summary - no, you don't separate it.  You can use it incrementally, but you don't need to keep it emptied.  Like I said earlier, you need a way to capture the larvae, so that you can either transfer them, or allow them to finish pupating, and keep them close.  If you don't keep your pile fed, they will definitely leave to seek food, elsewhere.  That can be used to your advantage, should you decide that you want to empty the bin.  I would recommend screening the compost, for large particles, and wayward larvae.

Here's my bin today.  I posted it in that other topic, but I'll update it in a few days time.
.
. 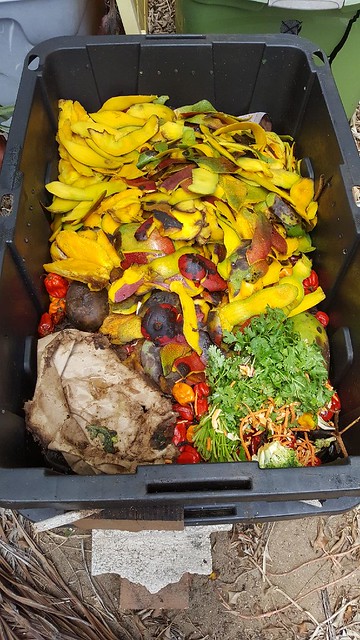 Composting - Is this a good system for Peppers?