1) Trim the plant down a little, but keep it in soil. Put it in a window that gets appropriate sun. The negatives are that the plants are difficult to move around and tend to attract bugs, and drainage can be messy. Because they are hard to move around, and indoors, spraying for bugs is difficult. If you only have a few plants, you could go with this method. This was the first method I ever tried for over-wintering. I had a bunch of Scotch Bonnet plants that were covered with un-ripe fruit, as they require a lot of sun, and we just don't normally get enough for Scotch Bonnets to do well. So I wanted to save the fruit and also hoped the flowers would produce even more fruit. All happened as planned, but they got buggy and most ended up dying.

2) Turn them into bonsais. Last year my late-summer peppers produced zilch. So I brought in 9-10 and turned them into bonsais (pepper bonsais = 'bonchi'). I bought the tiny pots, the special clay, special soil, grow lamps, etc. Grow lamps allowed me to move them out of an inconvenient sunny room, and put them in a window where I could work them more easily, and enjoy looking at them.
First photo shows eight such plants. They really did fantastic and it was simple to take each plant outside and spray with Neem oil to get rid of aphids, as the location I chose was right next to the front door. They all got some sunlight because they were next to a huge window, but I also used grow lights which attached to my table easily. And they looked cool. No negatives to this method.
I moved them outside and planted them in a raised bed last May. I also bought a bunch of starter peppers, and planted those in pots, as I have always done.

Result: Six of the converted bonsais survived and three of those were my best late-season producers. A chocolate S.B. did fantastic - large, with lots of pods. The potted late-summer pepper plants all survived (they always do), but produced almost nothing.

3) Because I had lots of un-ripe pods and would lose them if I used the bonchi method, I decided to move back toward method #1 for this winter, but first discussed with a guy at my local garden store, who is very knowledgeable. The following is based on his advice: Put them in very small pots and use cactus soil (for drainage). I took the six survivors from last year, and six of the new peppers from pots, and converted them to small pots with cactus dirt, as my friend suggested. They were placed in small pots, in the same location as last year's bonchi.

The first photo is from last October when I first planted the bonsais. I started them in cheap plastic bonsai pots, then moved them to fancy ones after a couple of months. These grew much bigger, as you can see in the second photo. Notice also that I have uncovered some roots, trimmed, wrapped them around rocks - just like bonsai trees. It was a lot of fun.

The last two photos were taken today, and show the set of twelve in cactus dirt. They have been there now for about two weeks and are doing great. The plants themselves are in no particular order;i.e-former bonchi mixed with this year's new plants, but the leafier ones are mostly the ones that were bonchi. The ones with the tiny multi-colored peppers are 'Bolivian Rainbow', and are specifically recommended by bonchi growers. I will be moving both of those plants into Bonsai pots sometime soon.
The bottom line is that this is a lot of fun, and there is no reason why you can't eat great peppers all year long. 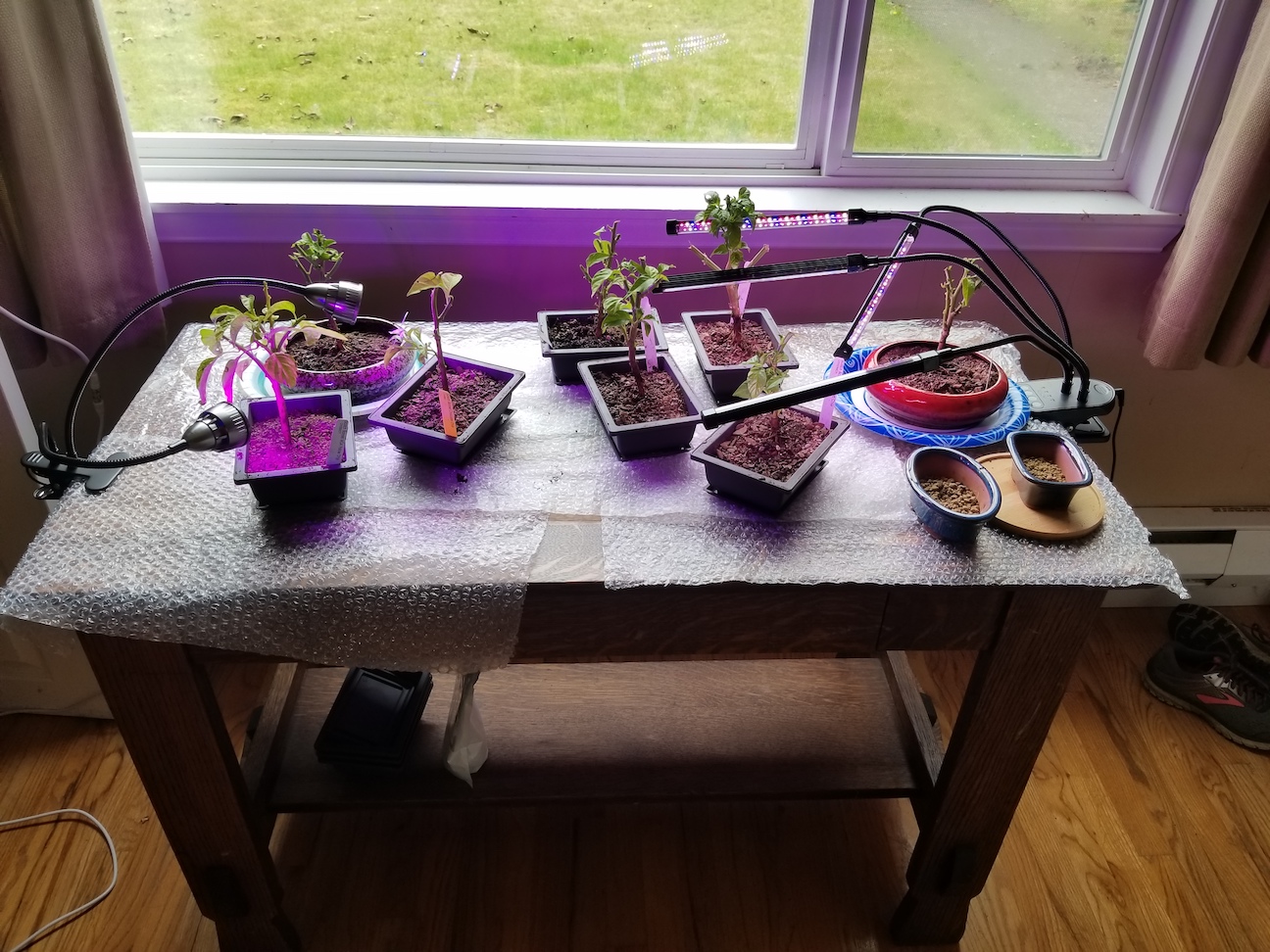 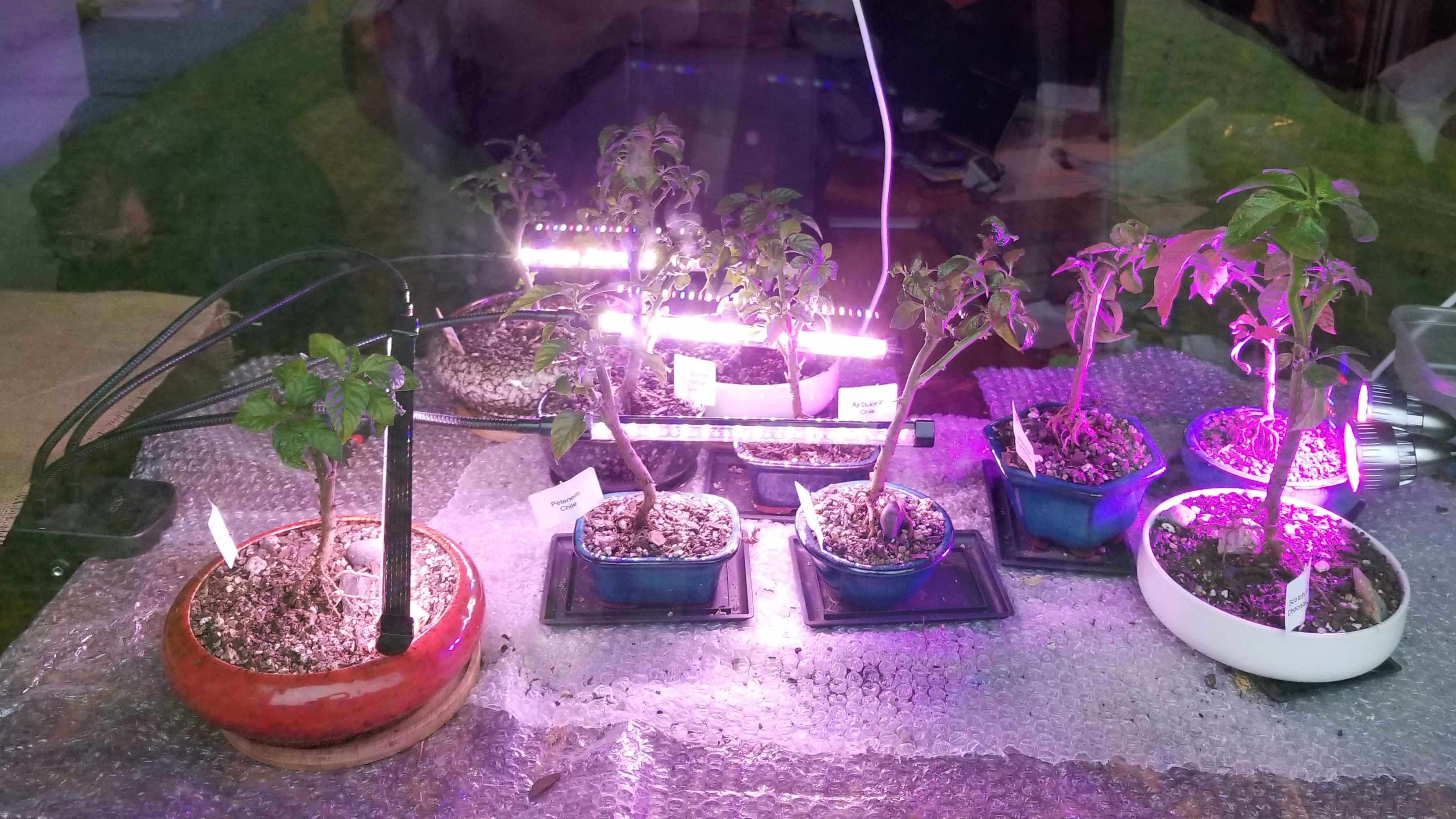 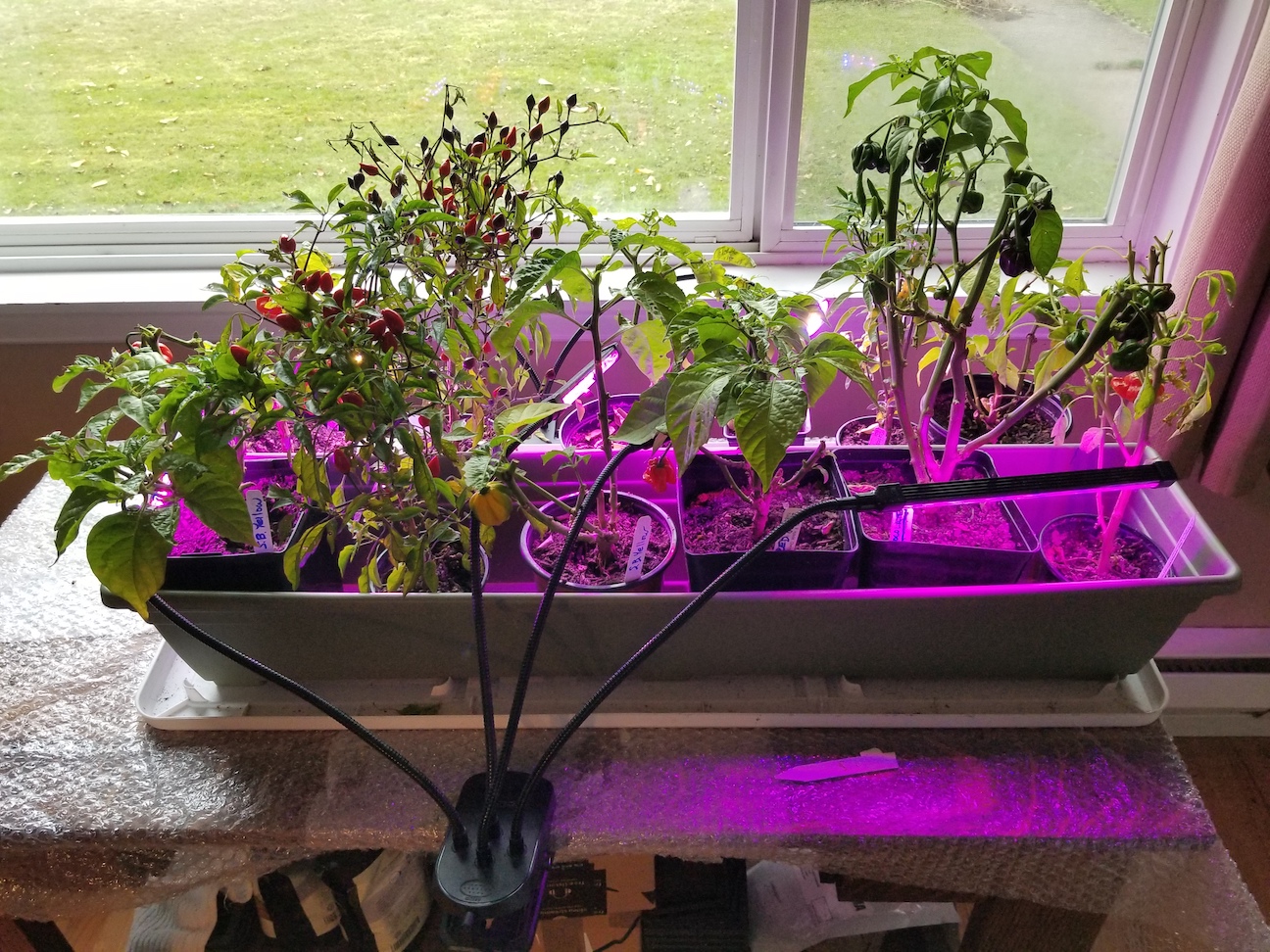 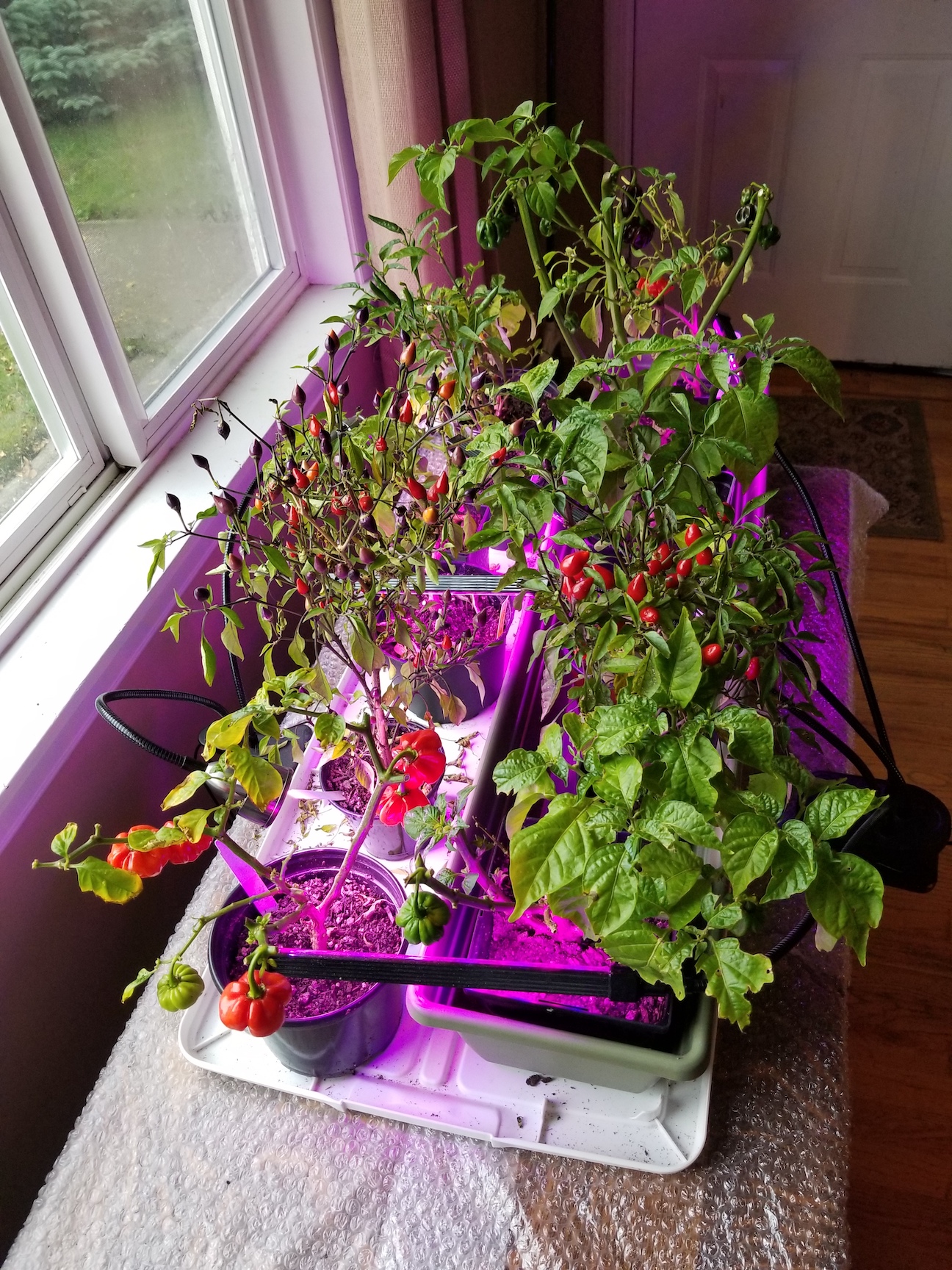 Extreme Member
I was planning on trying to do a full repotting this year, but I brought in the full spread of predators and prey, so I'm probably staying with the mixture of repots and not, as well.
Mind sharing your bonsai mixture? Seems like it worked pretty nice.
I do my mini's in sawed-off yogurt quarts with fabric sleeve inserts, or solo cups.. And I'm either running dry(if I leave them out of the bases), or I'm too moist. I think with that mix you're using I might could get away without the fabric sleeve entirely. This one grew up in here, gotta be almost a year old now. Goat's Weed Hybrid of @PaulG. 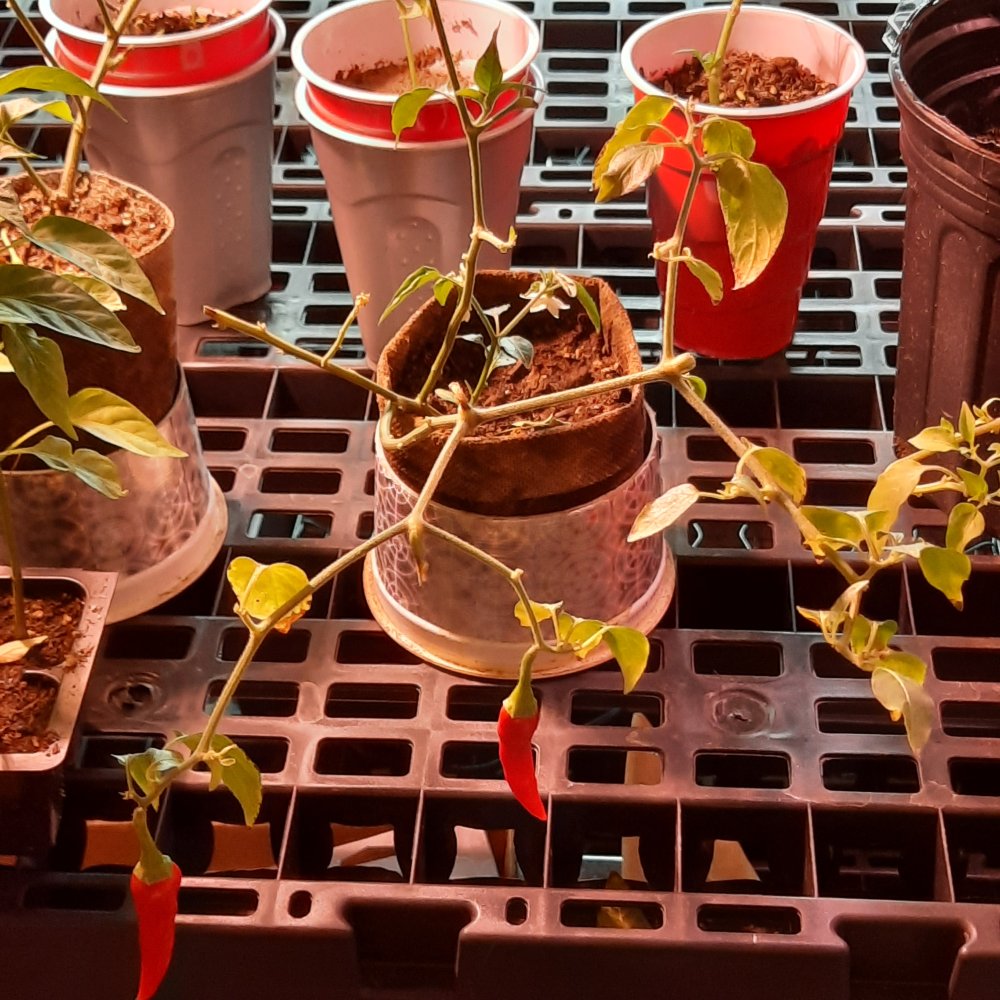 Good question. Last winter was the only time I have done this, and I don't have any soil still in packaging remaining, so I can't tell you brand names. As a first-time bonsai guy, I followed the 'rules': small layer of Akadama over the bottom for drainage, bonsai 'soil' over the roots. I can't remember what brand I bought. When I moved the bonsai plants to outdoors, I dumped whatever was in the pots, into a bag.

When I turned three of these back to bonsais today, I put akadama in the bottom of each, and the soil mix from last winter on top of that, for two plants. For the third, I used cactus soil on top of the akadama, just to see if it makes a difference. I found last winter, that if the soil started looking 'wrong' (not draining correctly), I just pulled the plant out and started over - there was no noticeable shock to the plant. The pots are tiny, so they are easy to work with.
Last edited: Oct 22, 2021

ScottsBonnet said:
When I turned three of these back to bonsais today, I put akadama in the bottom of each, and the soil mix from last winter on top of that, for two plants.
Click to expand...

Just curious what makes you take that approach, as opposed to using the coarser mix throughout? I would think that for such a small plant, one wouldn't want to impede drainage by mixing media types.

I've just started growing with bonsai mix indoors, for plants that have no chance of going outside, and my results are quite nice. It's pricey, and takes every other day watering. But it's almost impossible to overwater, and there's nothing but green. Also, I can use granular fertilizer, and use straight rainwater with no pH or EC checks. Oh, yeah, I also use bottom watering via flood, in an old ebb and flow hydro tub.

solid7 said:
Just curious what makes you take that approach, as opposed to using the coarser mix throughout? I would think that for such a small plant, one wouldn't want to impede drainage by mixing media types.

I've just started growing with bonsai mix indoors, for plants that have no chance of going outside, and my results are quite nice. It's pricey, and takes every other day watering. But it's almost impossible to overwater, and there's nothing but green. Also, I can use granular fertilizer, and use straight rainwater with no pH or EC checks. Oh, yeah, I also use bottom watering via flood, in an old ebb and flow hydro tub.
Click to expand...

Since it was my first go at it, I just googled what others were doing, and this approach seemed the most logical to me, but I think it's hard to go wrong unless you mess up the drainage - akadama on the bottom helps ensure no clogging. For most of mine I watered about every 3-4 days, but I had two that wouldn't retain water and started looking bad. By that point I had their roots trimmed really nicely and wrapped around rocks and didn't want to change the soil. Bottom-watering worked perfectly and brought them completely back.
You must log in or register to reply here.

cloning Which branches for rooting cuttings?

N
overwintering How Soon Can I put My Overwintered Plants Out?

media Do you add perlite or vermiculite to growing media?