My family lived in Central Mexico from about 1988 until 2001 and I used to go back down for a couple weeks a year, until 2010. For the last 8 plus years we lived there, we lived in the State of Hidalgo. The pepper which seemed most in demand in our local market was called Rayado, which in Spanish refers to the cracking or stripes on the mature fruit. This pepper was grown in a region called "la Huesteca," kind of a lowland/foothills zone, alone the Gulf Coast. Chile Rayado was native here and not grown in our town, which was at 5,000' altitude I tried for years to get seed of this pepper, but the only ones sold in the market had been smoked for chipotle and did not contain viable seeds. A German consortium of gourmets made some kind of agreement with regional farmers, who then formed a large co-op to grow and process this pepper. Some started seedlings, many grew them and few did the entire process from seed to fruit and back to seed. I failed in getting seed, and after a couple years I stopped trying.

After moving back to the USA I went back for a couple weeks a year to teach, and one year, a student, who picked up on my love of seeds, came in and handed me a sandwich bag with a fist full of Chile Rayado seed! I took it back to Oklahoma with me and have grown this pepper ever since.

Though the peppers resemble a Jalapeño they tend to be much hotter than that. Also, the leaves, stems which hold the pods and flowers don't much resemble that of a c. annuum, in my opinion. I've never had it cross with any other pepper, but I have kept it a very safe distance from c. annuums. It's grown right alongside c. chinese with nary a cross. I don't know what species it comes from? Would any of you? 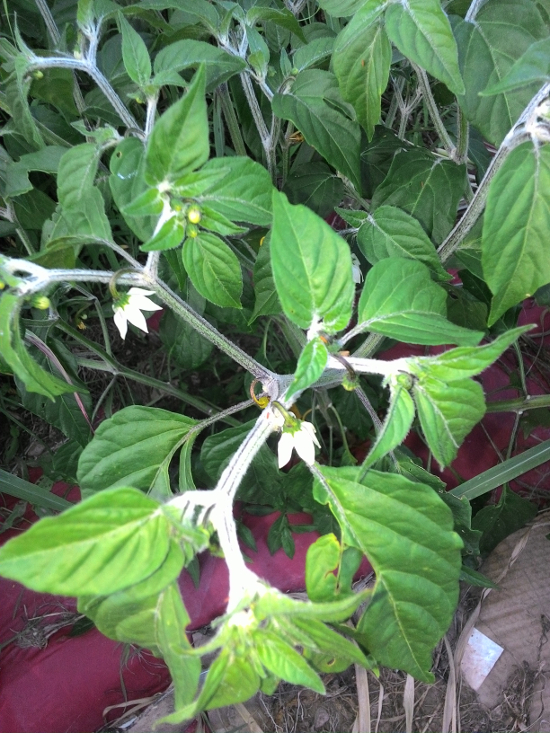 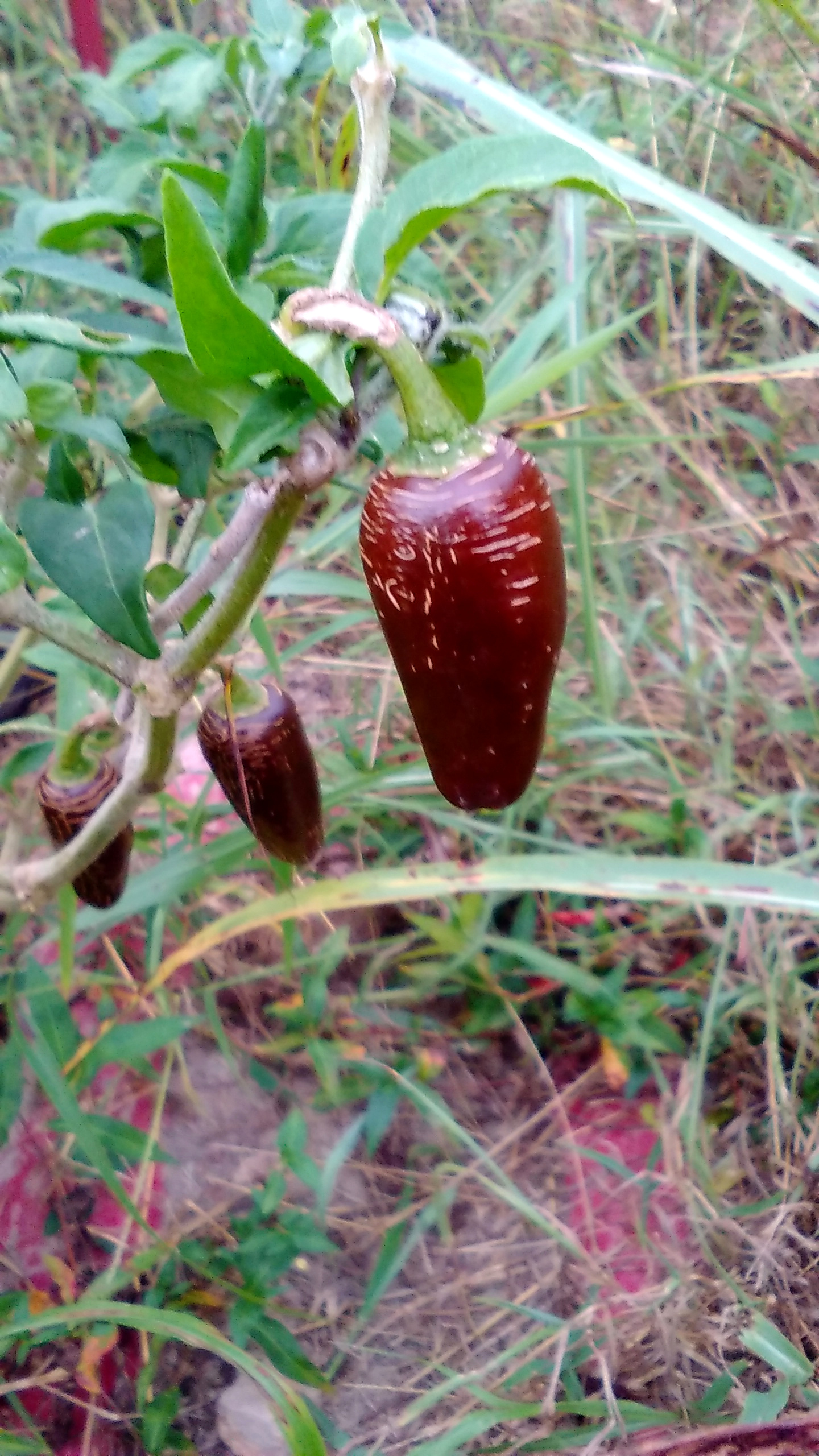 Here's a link to a thread on this pepper, with much more detail. Green Country Seed Savers: Chile Rayado
Sort by date Sort by votes

Great story! I'm sorry I definitely do not know what kind of pepper plant that is. It shows pubescent stems but not the leaves. Are the seeds black?

Nope. Seeds are normal yellow/tan in color. This pepper starts up unusually well in cooler temperatures, but also tolerates a lot of heat. The only thing I've seen kill it is excessive moisture. Last summer we had much more rain than usual and I lost a good many plants to a fungus on their roots.  The Huesteca, is pretty extreme, having periods of heavy rain and about 6-8 weeks a year of drought. Of course, where it's normally grown, it is mountainous and the plants rarely deal with standing water.
Upvote 0 Downvote

Nice. Not many peppers can deal with a rainy season. Good luck sounds like a great pepper.

Extreme Member
Fruit looks similar to annuum Chenzo.  Fruit also has characteristics of annuum Huesteco but larger.  Plant is not characteristic.  Willard could answer.
Many people have eaten food from my kitchen and have gone on to lead normal, healthy lives.
Upvote -1 Downvote

Bookers said:
It shows pubescent stems but not the leaves. Are the seeds black?
Click to expand...

There are non pubencens that stems are hairy, some C. annuum's are PEQUIN &_GOATS WEED
"Insanity: doing the same thing over and over again and expecting different results." - Albert Einstein
Upvote 0 Downvote

Extreme Member
It appears to clearly be an annuum.  I don't see anything that would suggest interspecific hybridization.

It's a great looking pepper.  Glad you were able to get the seeds for it.

What is it about the flower that suggests to you it might not be an annuum?  Do you have any close-up pictures of the a flower facing? Color of anther is another discriminating feature.

EDIT:  After reading your link, I see you've had other people tell you it doesn't appear to be an annuum.  Here's my reasoning beyond it simply "looking" like an annuum to me.

1.  No annular constriction of the calxy.
2.  One flower per node.
3.  Apparently all white (versus off-white or color spotted) flowers.
4.  Versus Baccatum - no diffused spots on corolla.
5.  Versus Chinense - one flower per node versus 2 or more. Lacks annular calyx constriction.
6.  Versus Frutescens.  Pedicels declining at anthesis.
7.  Versus Pubescens.  Glabrous leaves.  Seed color straw.

Okay. Well I thank you very much for the input!
Upvote 0 Downvote
S

I grew a couple Farmers Market jalas one year. They were as hairy as any pepper plant ive seen. Serrano can get some fuzzy stems too.
Upvote 0 Downvote

This is a perfect pepper for someone like me. The more unique the better! I've only been growing for ten years but I've always sought out lesser known strains.  Is there any chance I could trade/pay shipping for some seeds? I haven't really learned how to navigate this site, but here's my email :     brendanpicante@gmail.com

I understand if you are hesitant, but hey, it doesn't hurt to ask!
Upvote 0 Downvote

Interestingly, when I ran Chile Rayado through GOOGLE Images the "Hits" they found included a Jala reference: 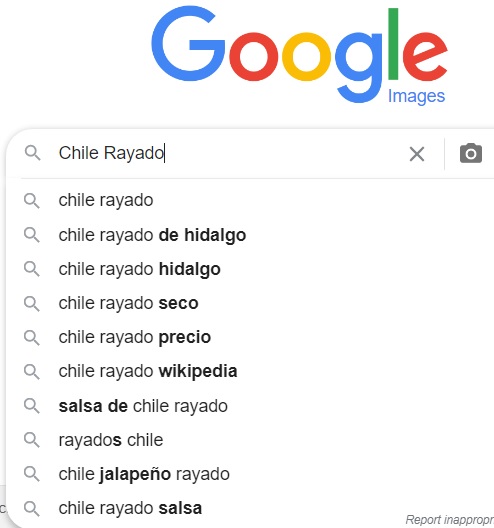 Admin
My anecdotal deduction is, the fact that they turn these into chipotles tells me it is annum/jalapeno type. Chiptoles in Mexico are very specific. The wood, the peppers, etc. And this area of the country has their version. This pepper looks amazing and man I would love to try that chipotle. From my reading this is hotter and richer. Hotter sounds good but richer sounds like it has higher sugars that convert in the smoking process. Sounds like a gem of a pepper fresh or as chipotle. Congrats!

Anyway there's some people in the know!
https://mexicanfoodjournal.com/chile-rayado/

https://articulo.mercadolibre.com.mx/MLM-767503937-medio-kg-de-chile-rayado-_JM?quantity=1#position=2&type=item&tracking_id=bcda0d69-ad24-478a-b768-61fa6ca211bd
Want a signature for fun or advertising?
Extreme members can put text and a link here!
Extreme Biz members can put text, a link, and an image!

Thank you, everyone! I am very appreciative of your input! It's interesting that Chile Rayado even tastes smoked, when it's not. My wife cuts and dehydrates them, using them in hot sauce and cooking. They lend a smoky flavor to anything we add them to. In Mexico, I remember seeing them being smoked on wooden racks over oak. I have not grown another kind of jalapeño for years now, but my recollection was that some of them are pretty hot and some of them are "pretty not." This is probably varietal. The jalapeños we purchased in Mexican markets were fairly uniformly hot, though not as hot as a Rayado.

The only memory I have of growth habit of regular jalapeños is from about 50 years ago, when my father grew them. I remember them as being more upright in growth than the Rayado. Rayado tends to sprawl and, it hides its peppers. I'll be thinking that it didn't produce very well, and then be surprised when I dig through the foliage.

My father and us kids had a hobby of growing new hot peppers and trying to find one hot enough to make one of our dear friends, who was a real fire eater, admit that it was hot. We never achieved our goal. I even carried rocotos from the sierra north of Puebla back to NJ for us to try on him. He simply ate them, raw, and said, "That's got a bit of a spicy flavor to it." Anyway, I'm positive that Dad had some serious crossing going on in his garden. When he regrew from his own seed, the varieties often behaved very differently than the first year. I remember marveling as we tried jalapeños from one side of a plant, which were pretty hot, and from the other side of the plant, they were pretty mild!

By the way, I do have plenty of seed. I can get any of you a sample, if you will pay my postage cost.
Upvote 0 Downvote

Oh my goodness! The video from Radio y Televisón de Hidalgo, was made RIGHT WHERE I used to visit! Made me smile, as I used to joke that everyone there was either a Trejo, an Hernández or both! That's exactly where my seed came from. Though, I noticed that they said they select for the most cracks in the skin, when saving seed. I have not been doing that. I need to start.
Upvote 0 Downvote

Admin
Glad I could help!

Looks like c.annuum for sure. Sounds like an awesome jalapeno. I have a hard time finding varieties I like but buy chipotle moritas imported from Mexico that are the best. I wonder if this is the pepper used. Let me know if you'd like to do a trade at the end of the season.
Upvote 0 Downvote

Extreme Member
Hey macmex.  I want to pass back a big thank you for sending me seeds for your Rayado.  They arrived in great shape.  Based on your comments and pictures it seems like a fantastic pepper and I really appreciate you sharing seeds with me.  I hope I have the chance to repay your generosity and, of course, feel free to ask anytime if you see me growing something that interests you.

It was a super busy week for me, but I put some seeds in to soak today and expect to get them into soil by tonight.  I hope to be able to get a good harvest still this season, but even if I don't see their full potential I'm confident I'll get some ripe pods.  Plus I'll have more seeds for an earlier start next year. 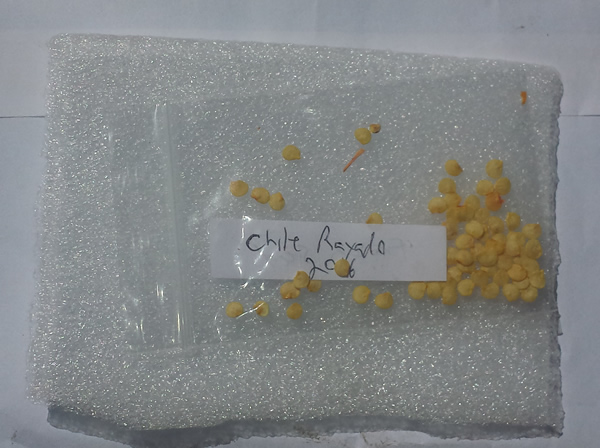 They seem very quick to germinate and grow rapidly. I bet they'll produce a nice crop for you, even this year. I'm happy to have some pepper lovers growing these. It's good to spread the seed around and make it more secure!
Upvote 0 Downvote

This looks very like an Xalapa landrace to me.
Upvote 0 Downvote
You must log in or register to reply here.