Hey guys, I'm still a few posts behind but I seem to be catching up on my blog post copying backlog at last. Today's went up on my birthday as a sort of special bonus review and is, like last year, something stupid.
If, like many true chilli heads, you're adamantly against extract sauces, this is something you're going to want to pass on. For the sake of my blog, however, I try to be a little more open minded and, honestly, while I do prefer to taste a pleasant pepper (screw bells), I'm not someone who can't enjoy an unnatural sauce if it's well enough crafted.

The following products probably weren't something that I would have chosen for myself but they were better than expect. For anything more than that, you'll have to read on. Just bear in mind that this content is aimed at a more general audience, not a community of pepper purists like yourselves:

Surprise! It's a sauce review on a thursday!
Why? Because it's my birthday.

A year ago today, I tried what is probably the hottest extract-based sauce in the world and, because I really don't know what's good for me, I figured I'd make a tradition out of it.
I bring you Chilli Pepper Pete's Dragon's Blood. 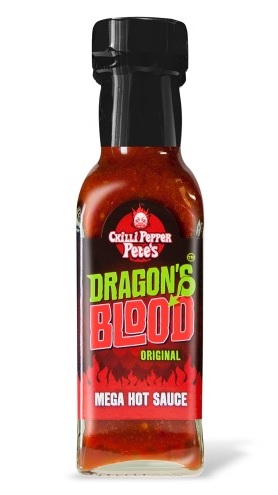 Not one of the sauces that have gained the name in later years but the original. The legend. The old extract sauce I still hear tales about to this day.

Made with 6.4 million scoville extract, the company call it “Mega Hot” and rate the sauce itself at eight hundred thousand but they also claim it has a little more going on than just the heat, with a good deal of flavour behind it too.
We'll find out how well it lives up to their claims in a moment but first, let's take a short break to look over the packaging. And to psych myself up again after the scarily strong pepper smell of my sample.

The first two things I notice are, indeed, what they should be: The company name and that of the sauce.

The sauce's name is huge and on a slight diagonal, for added impact without losing readability. It comes in two colours. A neon green for the word “Dragon's” to represent the skin of that mighty beast, alongside a white-outlined pinky red for the “Blood”, both standing out well against the darker reds and blacks of the scaly background.

Then, above this, we have the company's name in white against a red circle and their red and white flaming head logo, showing up impressively on the black at the top of the bottle. Something about how this icon comes up out of the otherwise rectangular label really draws attention to it.

But the name has its own way of catching the eye, with a pointy tail on the S that drops down over the second word to further highlight the colour contrast.

It's some very well designed branding that doesn't visually say anything specific about the contents but does manage to get across a slight sense of danger with its red and black warning colours.
And, if that doesn't clue you in, there's always the white “Mega Hot Sauce” written inside a raging fire at the bottom.

But how hot really is it and how does it taste? It's just about time for me to dig in. 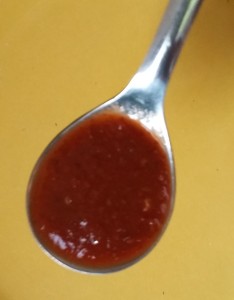 But maybe not into a full spoonful.

No, I have had the tip of a finger full and this is a good deal hotter than Dave's Insanity.
So hot that I'll be having to use a cocktail stick to better sample its flavour. Because, while heat doesn't detract from the taste like the less initiated tend to believe, overdoing it does and a spoonful of Dragon's Blood is definitely overdoing it. 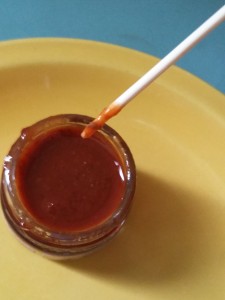 When eaten this way, however, I can get a pretty good idea of its flavour. It's fruity, tomatoey and just a little herby, alongside the more expected red chilli taste. It's not something I would have thought its simple ingredients list would provide at all, what with it containing neither tomatoes nor herbs, but I'm certainly not complaining. As extract sauces go, this is one of the better tasting ones.

I can't pick out the specific vinegar they've used but I can, after reading the ingredients list, make out that some of the fruity elements are indeed pineapple juice.

It's quite an interesting flavour and it comes in deliciously sweet but, as the heat comes through, so too does a strong bitter pepper taste from their extract. Not one that overpowers the flavour of the sauce but one that ruins a little of its subtlety and definitely overpowers the sweetness. Which feels like a shame.

But how hot is it, you're probably wondering.

Well, it's a chunky sauce that clings to the spoon but it's still surprisingly liquid and scoville ratings are traditionally done dried. As such, the dry sauce that was rated will have had a much higher heat per volume than the wet one they sell.
It's a bit of a cheat but we can't blame Chilli Pepper Pete for it. It's something that the entire industry has done for decades now.

What I can say, though, is that this feels far less like some of the thicker, similarly rated, sauces I've tried off record and more like it belongs in the three to four hundred thousand scoville bracket.
It's not what I was expecting but it's still an impressive heat in excess of even nature's absolute craziest sauces. An oddly flat fire in the throat, back and sides of the mouth that I would call a
[SIZE=300%]14/10[/SIZE]
[SIZE=300%]Heat[/SIZE]
And one that lingers for a good long while before eventually fading out.
It's a powerful sauce but it's not all I have to offer you today.

Chilli Pepper Pete also sent me a sample of their Triple X Ultra Hot version. A newer, stronger version of their Dragon's Blood recipe made with three different extracts for a more layered heat profile and higher peak. It's their strongest sauce.

The label is similar but, instead of red and black, it's silver and black, with three Xs below the name to represent the three extracts inside. The word “Mega” has changed to “Ultra” and the colour of that heat rating has gone red to keep it visible but, other than that, it's the same design.

It is impossible to properly capture the shine of the metallic labelling in still images but, from the videos I've seen, this sauce looks a hell of a lot more sinister in person as one slight change in the angle at which light hits it can have almost the entire thing going black.

And it is. This is extract sauce. It's not for the faint of heart or for anyone who hasn't already exhausted everything nature has to offer. But how hot actually is is? 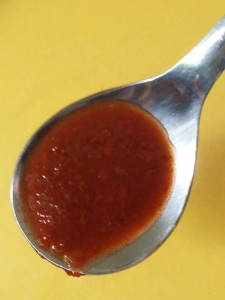 The look and the consistency tell us nothing about the difference but another cocktail stick will.

It's more savoury than the last, even at the beginning, the peppery taste coming in just a little at the start. Then it grows in further with the heat but the bitterness actually seems a little less and I think I might even prefer the richer and more well rounded flavour that the earlier extract notes bring.

Not to mention how much better the build up of heat feels when compared to the quick fade into and long fade out of their rather flat-feeling original. Yet, despite all that, it still hits me all over with a
[SIZE=300%]23/10[/SIZE]
[SIZE=300%]Heat[/SIZE]
peak that again takes forever to fade.

They're both pretty decent but, of the two, this “Ultra Hot” version is the one that I would most recommend. And I definitely would recommend it but, again, only to the crazy. If you've not tried a good number of super hot products already, please don't damage yourself by venturing into extract ones this strong.

Great review, and happy late birthday
You must log in or register to reply here.