This is one of the reasons I can't really bring myself to move back to the US. I love this stuff. 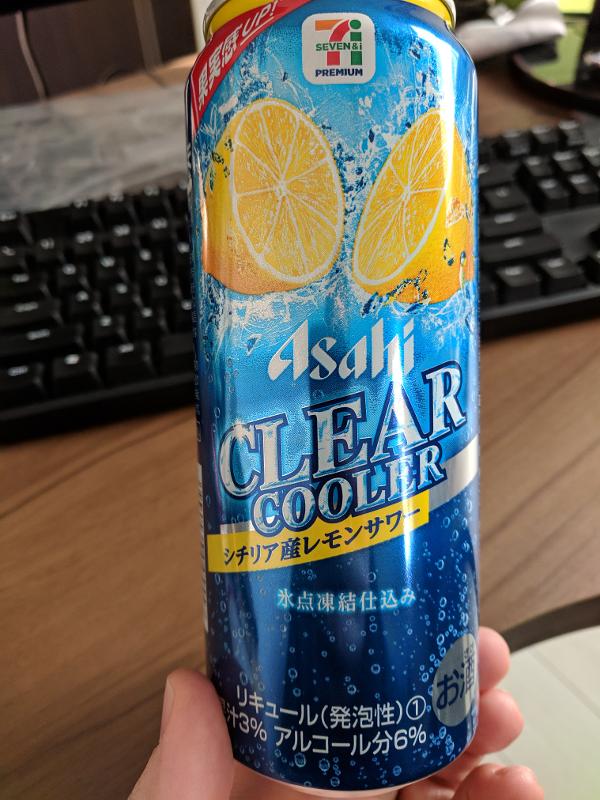 It tends to range from around 3% to 9% (often marketed as "Strong") alcohol content, and comes in a range of flavors that typically include lemon and grapefruit, then branch out. Since sweet flavors aren't as popular here as savory/salty/spicy/etc., there's usually a really interesting selection, which is often seasonal.

I'm pretty boring; I love my lemon chuhai (and I'm almost certain my local convenience store started stocking more after I moved here, because I do go through quite a bit). This particular one is a store brand for 7/11 -- Seven & i is their holding company; the whole thing is Japanese-owned -- and brewed by Asahi, same as the beer.

"Chu" here refers to shochu, a really cheap, often home-brewed liquor you often find where salarymen go to get wasted without breaking the bank. And it varies a lot; in southern Japan I had homebrew shochu made with massive dead bees mixed in that gave it a numbing sensation. Though not as much as habushu, which is also really awesome. "Hai" here comes from the transliteration of highball. So a meaningful translation might be "cheap booze mixed with stuff that tastes good." It's very popular.

Thanks to the holidays I'm currently enjoying this in the early afternoon on a Tuesday while my wife teaches a Korean lesson downstairs. Cheers!

i`m tryin` to wrap my head around this!?!?! so is it a boozed up carbonated lemonade? it sounds like it would be refreshing in hot weather for sure.

luvmesump3pp3rz said:
i`m tryin` to wrap my head around this!?!?! so is it a boozed up carbonated lemonade? it sounds like it would be refreshing in hot weather for sure.
Click to expand...

That seems like a reasonable comparison, yep! The carbonation is very mild. Which is great, since it means you can leave half of one in the fridge overnight and it's still passable as breakfast the next morning. Definitely great for summer, too.

Well, in that respect, it's like any other boozohol: The first one is probably an actual temporary +1 to charisma, but past that, the perception penalty gets so severe that it stops mattering.

Extreme Member
This stuff?  Stiller appears to be a fan.

CaneDog said:
This stuff?  Stiller appears to be a fan.
Click to expand...

Haha, yep! That's one popular brand. We get some interesting US celebrities. Tommy Lee Jones regularly promotes one of the major coffee brands, and I've seen Bruce Willis in TV ads more than once. Willis' Japanese is really awful.

Extreme Member
No Christmas KFC to go with that? Lol
A wise man never  argues with a skunk, a mule, or a cook.

internationalfish said:
This is one of the reasons I can't really bring myself to move back to the US. I love this stuff.
Click to expand...

The Hot Pepper said:
Try Smirnoff Ice, I bet it's the same thing. A "malt beverage" with lemon.
Click to expand...

This ain't no cheerleader beer!

Ashen said:
No Christmas KFC to go with that? Lol
Click to expand...

I actually wanted to do that this year, but we didn't get it ordered in time. Next year!

Oh, and a Christmas Cake for baby Jesus.
You must log in or register to reply here.