Go forth and make ramen (noodles)!

I am just gonna leave this right here.

I have not done it myself, but I have been looking into it. Going to try this weekend if I have time. This was pulled from a Japanese site.

That is all. Some people also throw in an egg yolk which would make it more supple, but the above ingredients are the basics. And indeed in China that is all they use for la mian (ramen).

If I am able to do it this weekend, then I'll come back with pictures. I leave the ramen soup up to you. If you get good at this and open a ramen shop and make millions, please remember me and make a Fil Special ;-)

Can't wait to try this out

let me know how it works for you!
the site I translated from had a lot of good information for all things related to Japanese noodles. that said you might be able to skip one of the rest periods once you get a feel for it.

I think in China they knead until smooth then Rest once only.

Would the flour be rice flour or wheat flour? I think I'm gonna try making it this weekend.

cruzzfish said:
Would the flour be rice flour or wheat flour? I think I'm gonna try making it this weekend.
Click to expand...

Ok, thanks. It's much easier for me to get then.

cruzzfish said:
Ok, thanks. It's much easier for me to get then.
Click to expand...

filmost - I need to see you doing this stat!

JoynersHotPeppers said:
filmost - I need to see you doing this stat!

I have done that only once, supervised haha. It's actually a bit more difficult than it looks b/c you have to get the right consistency. I'll definitely have to try on my own sometime. It definitely would not look that clean though b/c I don't have one of those planks oor the fancy noodle cutter he has.

You can basically use the same technique for the ramen. Places that make their own ramen here who don't hand pull the noodles will cut it just like that, albeit a bit thicker. The wooden plank helps keep the strands straight, although w/o it you just need to fold the noodles into a thinner rectangle (basically like how you would do fresh pasta).

And that is a very particular eating method, must be a local thing. Us heathens in the burbs mix the wasabi into the dip instead. ;-)

I still have yet to try this. :-( otherwise I would totally be back with pics. it is on my to do list though!

filmost said:
I still have yet to try this. :-( otherwise I would totally be back with pics. it is on my to do list though!
Click to expand...

Staff Member
Moderator
Business Member
Motion seconded.  Would love to see you do these fillmost.

I have my heat treated baking soda. ph strips show it to be about 11 or 12, which is just right. next step is to make some dough.

So my first go at making ramen was a big fail. Second attempt was much better, but still have lots of experimentation. Here's an album I started on imgur to document things. The photo of the actual noodles was from my second attempt, all other photos were from my first attempt.

First attempt I used the recipe from the first post in this thread. To be honest, if I knew then what I know now, I probably could have been semi successful with the first batch of dough. If you use this recipe, then use a pasta machine to roll it out, its a lot easier.

Second attempt, I increased the water ratio from 45% to 60%. Made the dough a hell of a lot easier to work with, but I still was unable to "hand pull" them. I ended up rolling the dough out by hand and cutting it up. I still have some experimentation to do, but my assumption right now is that using some kind of alkaline solution (in my case baked baking soda) causes the dough to be stiffer. Seems if you want to hand pull the noodles, then you'd have to leave out the alkali. Not completely sure on this, just a guess based on two attempts. That said, even with 60% water content on my second attempt, the noodles that I tested cooked up well and had a very good texture. Rest of the noodles are going into cold storage for use later this week. BTW, this is based on 200g flour, after all the other ingredients are added is probably only enough for two regular servings or one large serving. 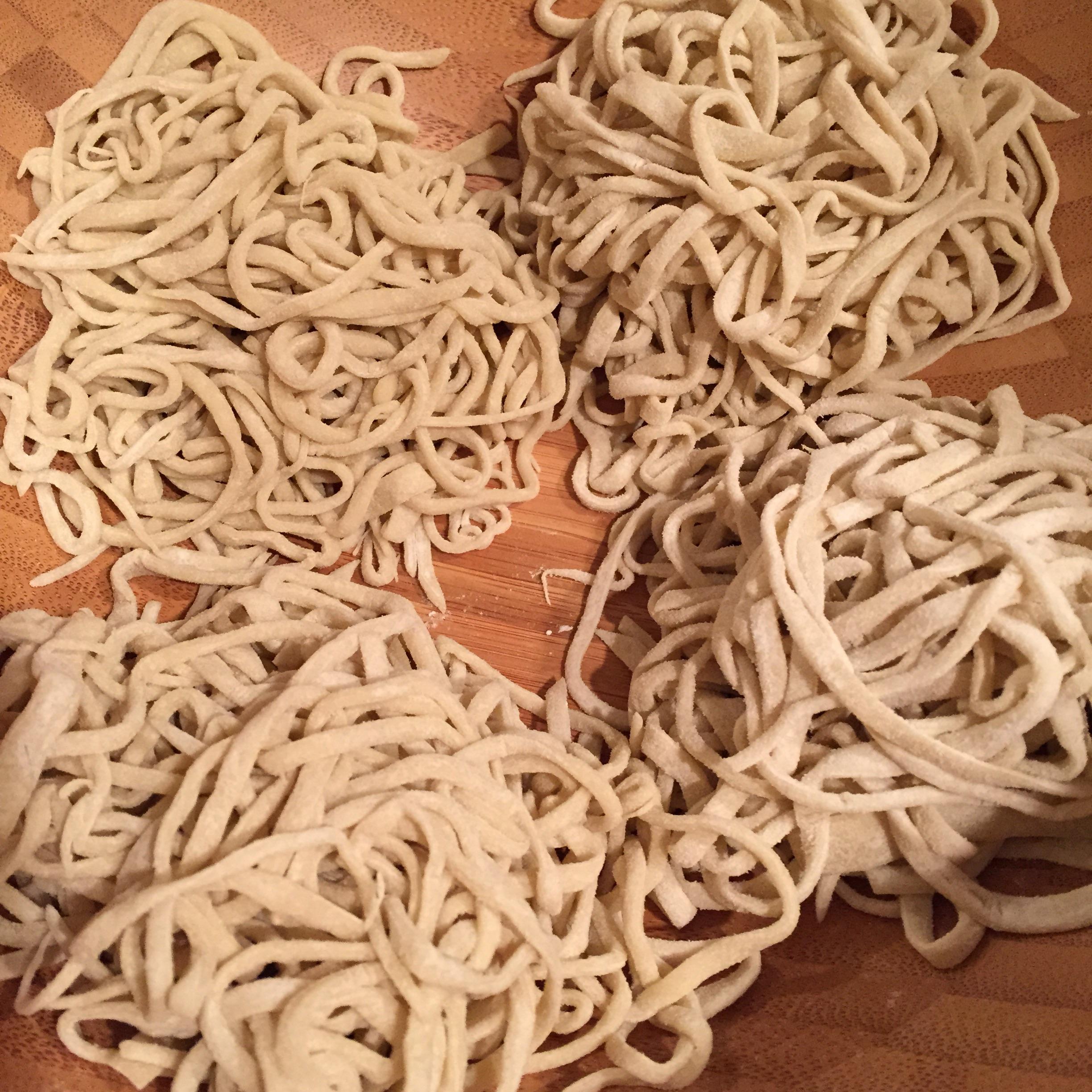 Extreme Member
Cool!
The Deep State
You must log in or register to reply here.