So some of you may remember my brief review of Hell Unleashed from before I ran a blog. It wasn't exactly favourable but, in a weird way, it was what got me into reviewing. You see, The Chilli Pepper Compay, one of the two companies involved in the making of the sauce, thought that I wrote well and wanted to see if they could impress me with a newer, better version. They sent me a free batch of sauces to review and I've slowly worked my way through the others but today we reach the big bad. Today we find out if they really can fix this monstrosity.

Happy solstice spice lovers, for you and not for me. Why? Because today I have to try this: 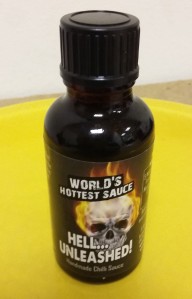 You've been seeing a few things from the Chilli Pepper Company recently and this is why. Some time ago, I tried the original version of Hell... Unleashed and was not exactly impressed. They sent me a review box in the hopes that they could convince me give it a second go.

At a glance, we can instantly tell there have been some changes. For one, it actually looks good now.
The new packaging sets a dark grey version of the Chilli Pepper Company's signature cracked earth labelling against a darker, brownish black bottle, like a bigger version of those you might see essential oils packaged in.

What was once a clip-art skull made of fire is now a much more unique and higher quality artwork in which the flames pour upwards from the eye sockets of a more physical skull, engulfing its entire upper half. It's somewhat reminiscent of Hotheadz' Satan's Sweat, which may or may not be a coincidence, given that both companies were involved in this sauce's creation. Either way, it gives you a small sense of the liquid death that awaits within.
Then we see the standard Chilli Pepper Company worn white text really coming into its own as the product's name, “Hell... Unleashed”, wraps perfectly around the slightly off-centred image. And the bold claim “World's hottest sauce” is emboldened further by some seriously amped up black outlining, so as to make it nigh impossible to miss.

I'm very pleased by how they've upped their game on the packaging but there is one aspect that concerns me. The new, darker bottle may look suitably sinister but is that really the reason for it or is it simply hiding poor mixing like we saw last time?

I can't get it on camera but I can sure answer the question. By holding it up to the light at just the right angle, I can get a look in and see numerous blobs of extract within the sauce. Same old rubbish as before I guess.
But wait, what's this? If I tilt it a little more I can see them move. Now that is new!

So clearly Hell... Unleashed is actually a sauce this time, rather than the paste it was before.
Looking at the ingredients list confirms that there have indeed been changes. Namely, the addition of water and citric acid to its previous moruga scorpion and mango base. Does this mean it'll mix though? I give the bottle a quick shake and fill a spoon up to find out: 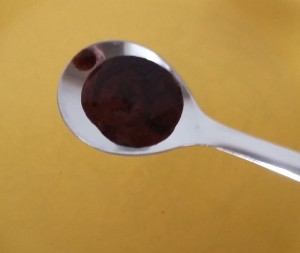 So it's not perfect but it's a, cough, Hell of an improvement. Now excuse me while I go wash this spoon. Urgh, I can feel it already. 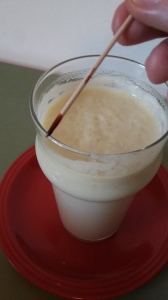 Now that's more like it. Had I reviewed it more formally, I would have given the previous version approximately two hundred on my heat scale. Or, for those who'd prefer the official numbers, warwick university rated the first batch at over 5.3 million scoville when dehydrated (how most sauces are measured) and over 2.5 million when wet.

I'm about to ruin my evening with nothing more than a cocktail stick.

I've got my milkshake ready but I think I've put on a little too much for it to save me. Easily done with something this monstrously hot. I'm starting to panic. I haven't even tried the sauce and I'm already coughing from the fumes. Washing the spoon really got it into the air. Be careful and make sure anything you handle this sauce with is disposable.

So I dive in quick before I can chicken out. Because I have to. For the company who sent me this and for all of you.

And, honestly, it doesn't taste nearly as bad as I was expecting. Whereas the previous version was just a mishmash of dark extract bitterness and generic brown fruit mush, this one has a single, well rounded flavour that combines those of all its contents.

Its main body is that of mango, the fruit coming through more positively this time, but it's not the perfumed flesh of the fruit. No, what this resembles is more akin to the rich, syrupy, sap-like flavour of the juice that congeals on the skin when a mango is at its ripest. And the extract forms a part of this, providing a depth and unnatural darkness that, in conjunction with the zing of chilli and citric acid, gives a feeling of fire long before the actual heat kicks in. Almost in the same way aniseed seems to in some chilli sweets.

But that's not what the citric acid really does. Either it's there to better preserve the fruit or, if my suspicions are correct, it's covering the extract. You see, while I do sense that the unique dark, chemical taste of extract makes up a fair bit of this sauce's flavour, none of the bitterness is there and I think the citric acid is why.
It gives a fruity burst of sour, smaller and more gentle than that you'd find in a carolina reaper product but present enough that it'd certainly be able to hide a little bit of bitter. Not that “a little” is really what we're talking about when this sauce is mostly 9 million scoville extract.

I wouldn't exactly say that this sauce doesn't taste of extract. That's ingredient number one so of course it does. What it doesn't do is have that bitter edge to it that makes the extract truly unpleasant. And nor does it have two distinct aspects to its flavour this time. Instead of being extract and fruit mush, this version tastes like its own dark, citrusy, syrupy entity.
Is it nice? No. But it isn't unpleasant either. It's just ok and, at this heat, even that's impressive.

But what exactly is the heat of this sauce? Well, when applying sauce with a cocktail stick, the heat tends to stay on the tongue more than normal but, given how long it took for this particular one to spread, I'd say it's likely to be extremely tongue heavy regardless.
Not that it stayed there forever. There was a bit of throat burn as it worked its way down to murder my stomach. Bear in mind here that “a bit” is a relative term. It was small only in comparison to the pain all round my tongue.

It hit quickly, for something of this calibre, reaching a hiccup inducing seven or so after only about a quarter of a minute, then growing rapidly from there.
Seconds later, I had to throw in the towel. I meant to save my shake until after the peak but walking off the pain simply wouldn't cut it this time. It was just too hot to handle and it wouldn't stop growing. Even through the milk.

Normally you'd get a brief respite with the drink in your mouth but now there was simply no stopping the inevitable tide of suffering.
As it made its way down into my stomach, I could feel every inch of my insides crying out for mercy but none would come. Countless times I had to fight back the urge to vomit and my glass was looking empty.
A tub of ice cream bought me mere seconds and no amount of bread would save my tortured tum. Finally, it was the fresh milk that tipped me over the edge. Too much dairy. I couldn't keep it down.
Up came my entire meal and every futile attempt to numb the pain. And not slowly, either. Nothing in the world could have prepared me for the force of all that fiery food hitting my sinuses from below. The pain was momentary but unbearable and the heat in my mouth was not noticeably any less than on the way down, despite everything it had been mixed with. My god that hurt!

So, to those of you wanting to try the “World's hottest sauce”, I don't doubt that this is it, but please don't. Just give this a miss. For your own good. Last time was dire but I must have had a mild patch or something because this was complete insanity. I will never eat this sauce again.

But you want a rating, don't you? Well, from my experience with this new batch, I'd say it's hotter than 3 million scoville extract and hotter than my roughly 4 million estimation for what the last one felt like but, despite being a far worse experience, not as high a peak heat as 6 million extract.
But that's with no end of dairy attempting to ease the pain. If any of that actually helped then this is even hotter than what I experienced so, just to be safe, I'll only put a lower limit on my heat rating of this sauce.

It's now an excellent display piece but sheer agony to the mouth, throat, stomach and nasal passage.

If you have the self control then, by all means, keep this in a display case on your mantle piece. Show it off. Talk about it. Show your friends my experience. Just, whatever you do, please don't open it.
You must log in or register to reply here.