I have long been a fan of Indian Chinese food. To my understanding, its origins are based on food cooked by Chinese migrants to India designed for the local Indian palate. So it tends to be spicy but also using soy sauce/vinegar and cooked quickly in a wok rather than the more typical Indian way of cooking slowly over a long period of time. Although it's called Hakka cuisine in India, it bears little resemblance to the cuisine of the Hakka Chinese.

The occasional dish that you would be seen offered in Indian restaurants in the UK but was never ordered as we were there for the curry! In a few trips to India and Sri Lanka, I experienced it more and enjoyed it immensely but never really sought it out when back in the West. When I lived in Trinidad, there was a restaurant called Hakka which served this kind of food. It was so good that we'd eat there almost every week. Moving back to Houston, I managed to find a couple of restaurants that make this style of food and we occasionally frequent them.

Now that we've been stuck at home I thought I would explore how to cook this stuff at home and have found it surprisingly easy. So I thought I'd share my recipes as I try them out. Please do add your own if you have them.

First pick your protein or vegetable and cook. You can grill or fry chicken or other vegetables. I don't worry about trying to get too much flavour as the sauce/gravy has all the punch. I have made this with tofu cubes marinated in some garlic powder, salt and corn starch and oven baked. You can also make a simple batter and coat/deep fry chicken or pork chunks. A common version is to make this with battered fried cauliflower florets or balls/fritters of diced vegetables.

Add oil to a hot wok and sauté onions, green pepper & celery until the onions are translucent (tip: Kroger does a meal starter in the frozen veg section which has chopped onions, pepper and celery so you can just use this). Then add the garlic, ginger and chillies and sauté for a couple seconds.

1 tbs soy sauce
1 tbs vinegar (any kind, I use Chinese black)
1 tbs ketchup
1 tbs chilli paste (I use sambal olek but you can use sriracha)

Add the sauces above and turn the heat down to medium and cook for a little bit. Once the ketchup starts to caramelize on the sides of the wok, add 2 cups of stock or water. Mix everything to deglaze the wok and bring back to the boil.

Make a slurry with the corn starch and water and add little by little (maybe a third at a time), mixing well into the wok resulting in a shiny gravy sauce. Make sure it bubbles, taste and season - I use the low sodium soy sauce and ended up adding a little more. Then toss in your protein/veg, make sure they're coated by the sauce and you're done. Serve with steamed or fried rice.

This version which I just had for lunch was made with eggplant and mushrooms. 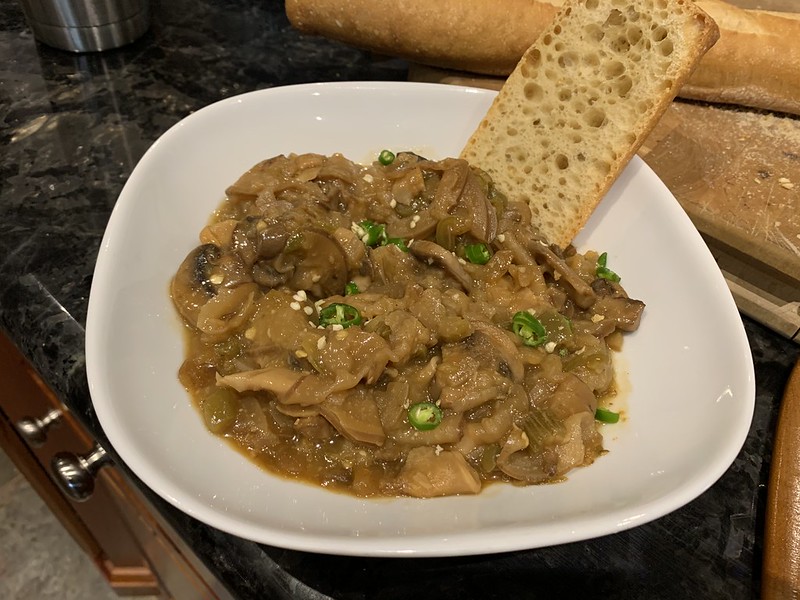 Siv said:
I have long been a fan of Indian Chinese food. To my understanding, its origins are based on food cooked by Chinese migrants to India designed for the local Indian palate. So it tends to be spicy but also using soy sauce/vinegar and cooked quickly in a wok rather than the more typical Indian way of cooking slowly over a long period of time. Although it's called Hakka cuisine in India, it bears little resemblance to the cuisine of the Hakka Chinese.
Click to expand...

This is a great find! Thank you - I'm gonna make the dry chilli corn today; it's a favourite.

Extreme Member
Thanks to NECM's link I made chilli corn last night. Well, not corn as I didn't have any, so I used okra instead. My wife has just made some white rice and I ended up eating all of it in one sitting! 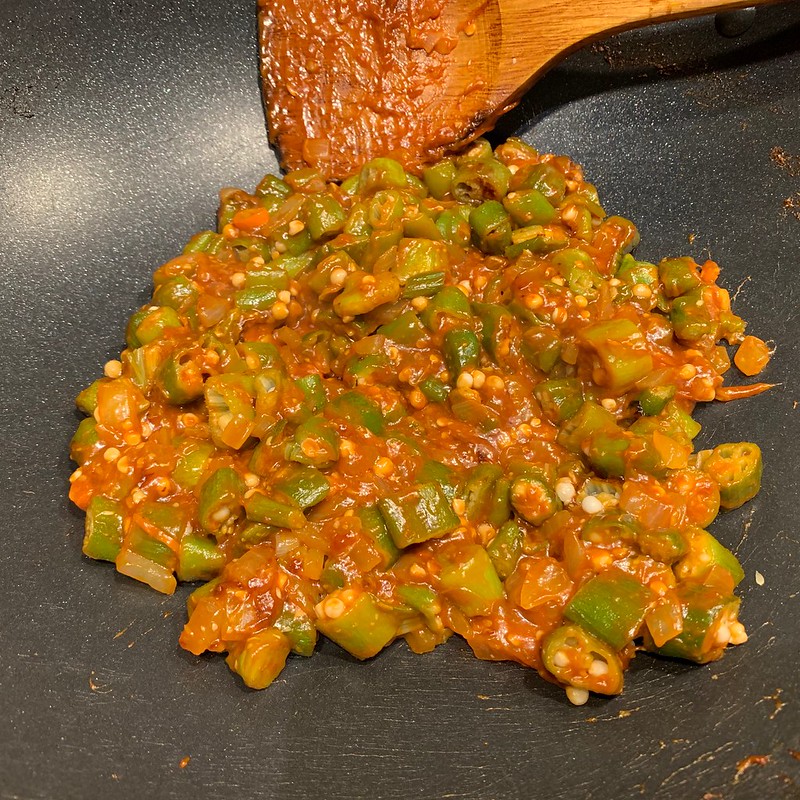 So very tasty - what should I make next?

Extreme Member
Last night's recipe was chilli "chicken" - not real chicken but chickwheat (fake chicken made with wheat gluten and chickpeas). Anyway, the process is the same either way.

Mix the batter and coat your "chicken" in the batter. I pan fried mine but you can deep fry if you want it extra crispy. I got a nice brown colour on mine. 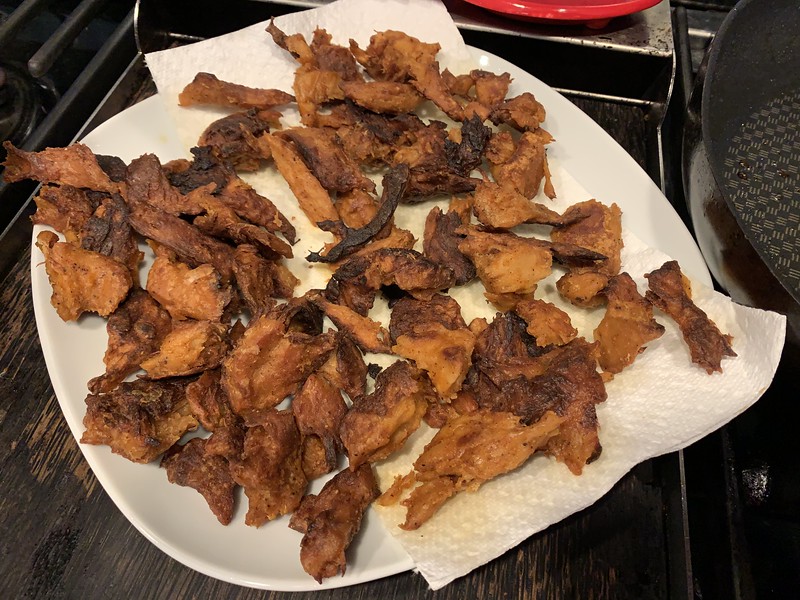 Mix the part 2 sauce in a bowl then add to the wok and cook a little. Once it starts to stick on the sides, add half a cup of water to loosen it up and then bung in your chicken. I had some cooked asparagus in the fridge so I shoved that in there too. 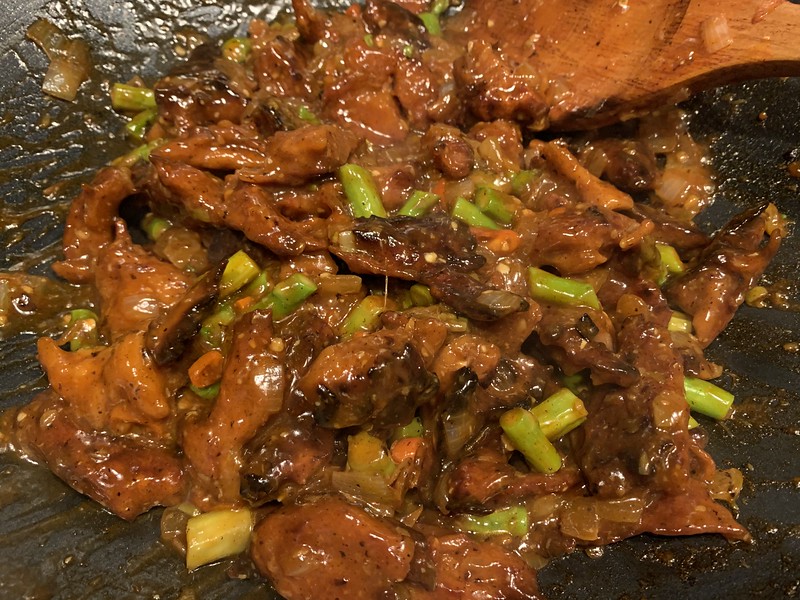 Serve over steamed rice and garnish with spring onion greens! 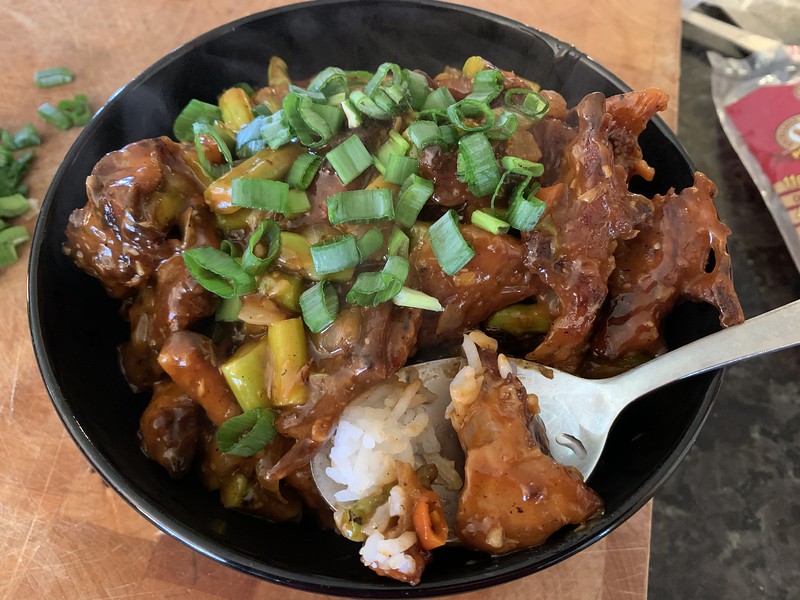 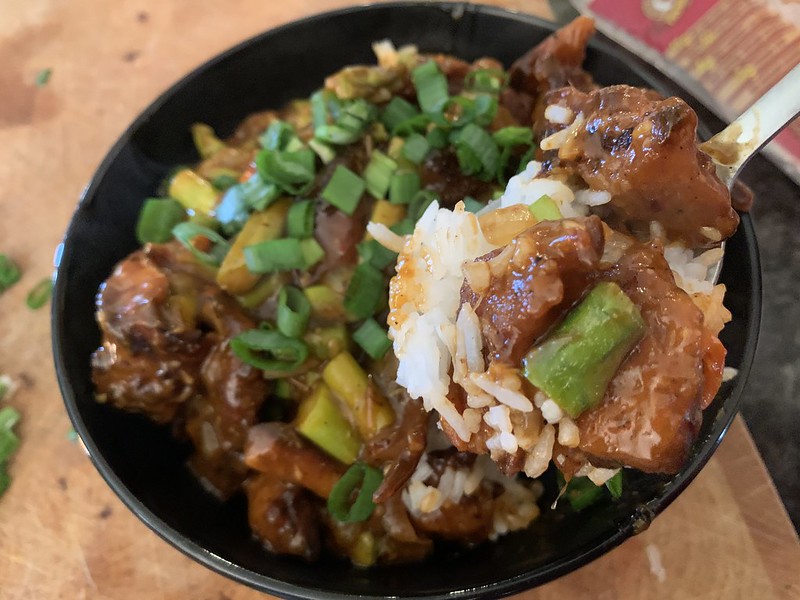 Been hankering for the Rendang for forever since Covid hit but can’t find a good recipient for it.. anytime I try to make anything but Italian it never comes out like I am envisioning in my head..

ironoxide said:
Been hankering for the Rendang for forever since Covid hit but can’t find a good recipient for it.. anytime I try to make anything but Italian it never comes out like I am envisioning in my head..
Click to expand...

My wife is Malaysian so we do rendang on special occasions. It's a bit of a pain, much like many Malaysian dishes, solely because many of the ingredients are not readily available. To counter this, we've developed a number of tricks/shortcuts which make life much easier. Even then, it's still a process! Some of our tricks:

Kerisik - you can find frozen grated coconut in some Indian stores. They're frozen in a thin flat bag so they're easy to tuck away in the freezer. I defrost the whole pack and then toast in a wok over a medium heat for a long time. Eventually you'll end up with golden brown toasted coconut flakes. Then I put them in a blender and blitz - it'll turn into a thick paste as the oil is released from the coconut. From one pack, you'll have enough kerisik for two rendangs so I put half in a zip-loc and freeze it.

The spice paste or sambal is a typical South East Asian staple but finding lemongrass and galangal can be a pain. So what we do is make a huge lot of sambal and freeze it in portion size packs. And instead of shallots, I just use large red onions. Whatever the recipe says, multiply to make lots and freeze. Just bung everything in a blender and blend the snot out of it - make sure you blend it well as finding stringy bits of lemon grass can be unpleasant in the final dish.

Tamarind is another pain thing to find. We stock Indira's Tamarind Concentrate at home. We can find it in our local Indian shop, it's easy to use, not that messy and keeps forever. The only downside is that it's a little pricey.

Kafir lime leaves - another pain to find and honestly, we just leave them out.

Tamarind is also used in Mexico, especially here in the south. Perhaps you can find it in a local Mexican store as well?
AHayastani's GLOG 2022 :: The "OTHER" Files
You must log in or register to reply here.

In the Kitchen and Winging It