Figured it was about time to put a metaphorical face to my number ten spot so this time it's a reaper sauce review that I'm copying over from my blog.
I also wanted to change up the order a little while I was at it. Here goes:

Change of plan, everybody. We've been through a lot of hot stuff over the last year and a bit but I've still managed to build up quite the backlog of review products. So, as of today, I am no longer going to be dedicating the last tuesday of each month to a recipe.

Instead, every tuesday will be a review day but don't worry, I'll still give you something tasty to cook up. Only it's now going to be on the final weekend. The saturday or sunday upload slot that I've previously saved for the very occasional bonus dish.

And this gives me a little more flexibility with what I can show you, as well.

Previously, I've tried to keep at least close to one superhot item, one hot one and one mild or medium thing a month in order to please as many different heat tolerances as possible but now, with an extra slot opened up, showing off something crazy that won't suit the vast majority of people doesn't have to take the place of one of those.

The South Devon Chilli Farm's Reaper Chilli Sauce.
One of the two products that first set the upper limit of my scale and one of the absolute hottest non-extract sauces out there.

I'm not going to make any claims I can't back up, though. I'm not going to say that there's no natural product hotter. Without trying every fiery food product on the planet, I can't rightly make such a claim and I know for a fact that it wouldn't be true anyway.

This sauce may be 60% carolina reaper but there are purées of the chilli that are purer and stronger.

My ten out of ten rating simply describes the upper bounds of what a reaper or scorpion sauce can achieve in heat, not the full potential of the peppers in their purest form.
But enough of what this isn't, let's look at what it is:

It's a a 50ml, black labelled bottle of some very serious chilli sauce.

Its name is bold red and green and so too is that of the company. A company name enclosed by further lines of the “complimentary” colour combination.
And then we have the heavily outlined figure in the middle, with its very minimalist colour scheme.

It may be a bold, standout design but it's also simple and almost looks as if it were made to appeal to children. The one thing that gives away the crazy heat of this sauce is just who that figure is.
Death.

The reaper themselves, cloaked from head to toe in grey robes, bony fingers clutching their chilli scythe. No face to hint at any humanity or remorse.

It's a great image that plays with the chilli's name and hints at the fate within but still, the bottle seems surprisingly inviting for something that claims on the back to be “DEADLY HOT!”. And I do already know this claim to be true.

A fact that, while perhaps not implied enough by the bottle's artwork, is certainly hinted at by its size and the size of the drops that come out. 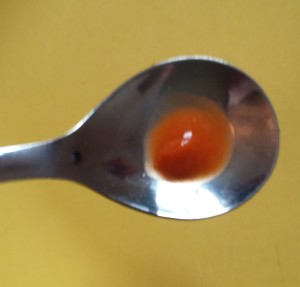 That's not the result of a Tabasco-style dropper cap, either. It's simply the result of trying to get a relatively thick sauce through the bottle's small neck. It basically has that flow restrictor built in.
But that's hardly a problem here. You don't want a lot of this sauce in one go or in one place. You want to use it sparingly due to its crazily strong burn.

A burn that, while striking across the tip of the tongue, is also surprisingly throaty for something so obviously reaper.

Yes, despite that strength of its burn, the taste of the chilli is instantly recognisable.
Rather soft and mellow, lightly spiced and definitely what could be called a little earthy. The flavour of this sauce is pretty much that of pure carolina reaper, with just the tiniest bit of vinegar coming through. It's surprisingly pleasant.

Or rather, it's pleasant for a moment.

While I genuinely really like the initial taste of this sauce, it very soon gives way to a rapidly growing sour, behind which the heat builds in, too. And, just as that sourness becomes a little hard to handle, the heat overtakes it, overpowering almost all else.

Normally I like to say that heat only destroys flavour if you exceed your own limits by a fair margin. Normally that line holds true. Here, however, I guess the flavour must have left when the sourness took over because there's not a trace of it through the heat, no matter how little I have.

The less I have, the longer I get to enjoy that initial flavour but it always gives way pretty quickly and has always disappeared by the time the sourness leaves. Which is a real shame.

I would not, therefore, recommend this sauce for flavour lovers. There are much better ways to enjoy the taste of reaper, even if this one is quite pure. This sauce is purely for the extreme heat seekers, I'm afraid.

It is still, however, a lot tastier than the closest extract sauce.
You must log in or register to reply here.