Here's the latest of my free sample reviews, a hotter candy from The Chilli Alchemist, content copied over from my blog again. Unlike the others in the melliculus range, this one was totally new to me but I thoroughly enjoyed it all the same:

Welcome back to another Chilli Alchemist popping candy review. This time, the Melliculus Aji, a more citrusy and slightly hotter take on the idea.

Visually, this one has even less going on than the Melliculus Tropicus but that simplicity and the contrast provided by its black background really makes its yellow name and cap stand out. You can instantly tell that this one is lemon flavoured and comparing its colouration to the rest of the range makes it rather apparent that this is their mid heat. The yellow fits right in between the green and red.

Their mid heat and most people's, however, may be a little different as, just because this is the middle of their range, doesn't mean this isn't hot. In fact, that's exactly what it says it is, right beneath the name.

Again, we see the faint arcane scrawlings hidden in the black background and the company name resides above that of the product but again, that's most of what I can say about the packaging. The font they use has a definite personality to it but the majority of The Chilli Alchemist's style remains in the test tube container.
Because their theme is alchemy, an old art somewhere between science and witchcraft with a simple basis in the four elements. Water, Earth, Air and, their favourite, Fire.

And, now that we've exhausted the theming of their product, it's time we tested its fire. 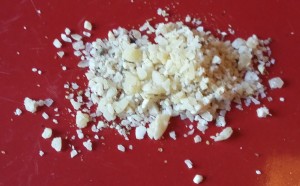 Unlike the last one, this popping candy has picked up some colour from its szechuan pepper content. It's not exactly dark but it's a golden brown instead of white. With, of course, some pretty obvious flecks of the pepper.

Before we go any further, however, I feel I aught to address a common misconception: Szechuan pepper is NOT a chilli. It is spicy, in a sense, but it's actually a type of chinese peppercorn.
Flavour-wise, it lends an unusual kind of peppery, flowery taste to this sweet that goes unexpectedly well with the not quite but ever so nearly lemon flavour of the aptly named aji lemon drop chilli.
Less well knowledgeable people have sworn blind that there's lemon flavouring in this but no, it's all aji.

Heat-wise, however, it's not. The lemon drop just isn't that hot and its clear to me that the mala, or “numb spiciness”, of the szechuan pepper is what's boosting it to achieve the top end of what I'd call a
[SIZE=300%]3/10[/SIZE]
[SIZE=300%]Heat[/SIZE]
A level that qualifies as “hot” like the packaging says but is on the lower end thereof.

It's not quite your usual sort of heat though. With elements of both chilli and the pins and needles like anaesthetic tingle of the szechuan peppercorns, this is the unique sort of heat you'll only find in a select few chinese dishes. Most notably, mapo tofu.

Unlike with mapo tofu, however, this stuff doesn't get milder as you go on. The crackling sensation of the candy itself seems to keep the peppercorns from sending my tongue to sleep, as well as sending the heat upwards to become a relatively powerful roof of the mouth scorcher.
It starts out mild on the tip of the tongue but soon becomes anything but.

And, as with all the higher levels of the Melliculus popping candy, this may well get a stronger reaction than other products of similar heat, just because of where it is working. By hitting as high up as they do, all of them have a greater chance of causing you to cough or your nose to run and they may be a different type of heat than those you're used to.

But before the heat, before even the lemony aji flavour, there's the same smooth, creamy cocoa butter taste we find across the range, leading you gently into the experience. It may sound a little at odds with something so citrusy and peppery but that's not how it works at all. The cocoa butter flavour manages to transition seamlessly into the main event, creating an almost lemon drizzle kind of flavour in the middle.

In the end, this one's a little less sweet than the last Melliculus popping candy and a decent amount hotter. It's still fine for most people who enjoy chilli but perhaps not for the more sensitive or those just recently acquainted with it. Its flavour is again a very unique one that wouldn't be possible without the heat. A simple fusion of flavours but one that works ever so well.

If I had to pair this with a food, I'd be inclined to choose something zesty. A cake that relies heavily on lemon peel, perhaps, or a drink with a twist of orange. I've also heard some lighter deserts suit it, though, like meringue pie.
And again, if you do top something with this, be sure to serve it quickly for best effect.
You must log in or register to reply here.