Copied over from my blog as always, still trying to catch up on the backlog of posts I have to share with you all:

Hey guys, it's time to meet yet another company who've sent me stuff. This time, however, they've only sent me a couple of similar products so we're going to be trying them as we go. 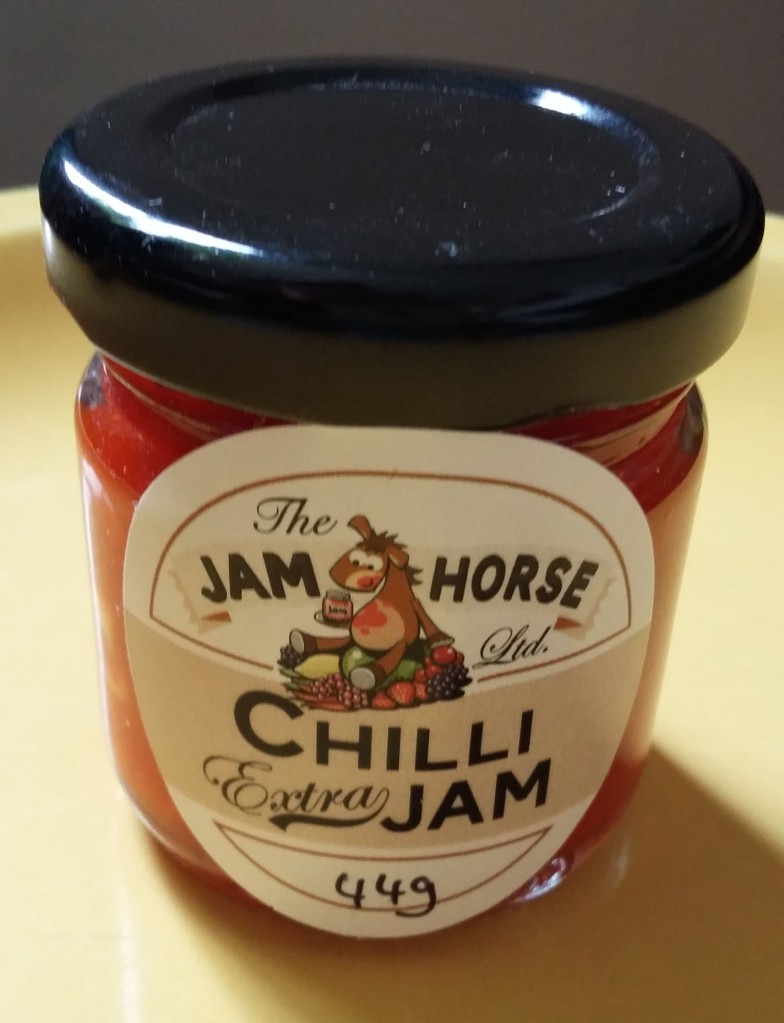 This is the Jam Horse's basic chilli jam, or extra jam as it says on the label.

Why? Because regular jam is mostly sugar and this one is mostly fruit. It contains extra of the ingredient that gives it flavour and significantly less of the sweetener.
But that's not all. Unlike the vast majority of chilli jams, the Jam Horse's creation is entirely tomato free. Its only fruit is chilli and that's more than half the contents.

They don't say what chilli they use, however, and, being a jam company rather than a chilli one, I doubt it's anything too fancy.

I'll put it to the test in a moment but let's have a look at their little label before I break it.

The most prominent part of it is the cream-coloured mid section on which the product name is written using the rather classic trick of having “extra” in ornate lettering and the rest in something very legible.
This trick exists for a few reasons. First off, the extreme difference between the fonts draws attention to the word “extra”, the part that tells us that this jam is special. Second, the fanciness of the font reflects that of the word's meaning. And finally, while “extra” is a very important word here, it's not the most important.

If people don't like chilli jam, they won't care how “extra” it is so what's most important is to get the flavour of the product across first. Something achieved with the far more legible main font.

But that's just what tells us what the company are. What makes them stand out is their lovely little logo.
Their company name in that main font on a pale banner behind their mascot. A jam eating horse.

But it's not just any horse. It's a cute, stuffed toy horse, strongly reminiscent of Winnie the Pooh. Especially in the jam splatters that adorn its face and stomach. And it resides atop a selection of the fruit they use.

It's really quite endearing, yet does little to detract from the traditional feel of the rest of the packaging. I like it.

Do I like the contents, though? It's time to dig in. 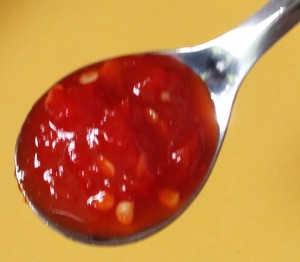 It's thick but more pourable than most jams, which is good because my spoon doesn't fit into the little jar they sent me.

This is probably, at least in part, because of the extra juice from its high chilli content. A huge amount of chilli that is easily seen in the seeds, shreds and pure red colour found in this product.

Even before I actually sample it, it is clear that the flavour is going to be that of pure, sweetened chilli and the slight smell it gives off, not unlike thai sweet sauces, only further supports this idea.

But the tasting still proves useful. It tells me that they're using the smaller, pointier red finger chillies and, while definitely sweet, it's not nearly as much so as the thai sweet chilli that its scent reminds me of. Or even as much so as most chilli jams. And it comes with some minor savoury notes from the chilli.

The chillies they've used are very much the generic sort, meaning that they're far from having all the subtleties of my favourites but still perfectly palatable.
And, possibly more importantly, they're a lot milder than most of the one's I'm used to. Mild enough that, even with well over 50% of this product being chilli, the jam only reaches the top end of what I'd call mild. On the high side of my
[SIZE=300%]1.5/10[/SIZE]
[SIZE=300%]Heat[/SIZE]
making it a very accessible source of sweet and pure chilli flavour for use with cheese or cold meats, or potentially even caramelising over a roast.

I wouldn't say that it's anything unique in terms of what it does but it fulfils its role very very well.

And, if you would prefer something with a more distinctive kind of hot pepper, they did send me a second jar. 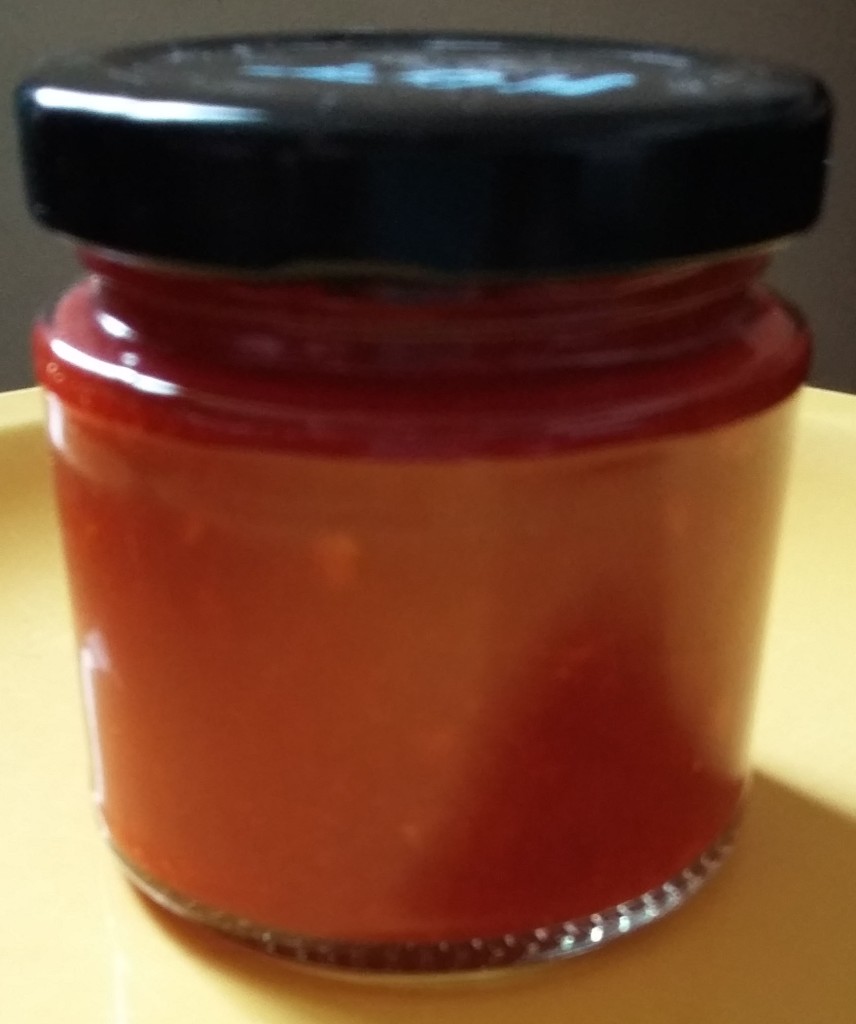 An unlabled prototype of their upcoming “Horse Kicking Hot” Chilli Jam, a scotch bonnet version that will probably hit the shelves quite soon.
Its difference is immediately obvious in its texture aswell. 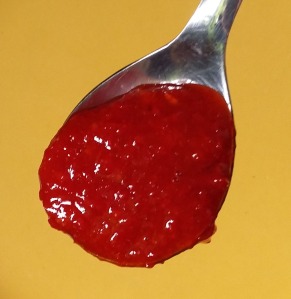 There are not nearly as many seeds in this one and the already fairly fine shreds of chilli now look almost pulped.

Have they processed this one further? Possibly, but it's also equally possible that this is simply a result of the change in pepper.
Small, red finger chillies have a much higher seed to flesh ratio than the scotch bonnet, while the relatively large quantity of flesh in the bonnet is all pretty thin and therefore likely to break apart more easily.

Yet, despite the clear change, it's not actually as much hotter as I was expecting. I'd call it a nice, medium
[SIZE=300%]2.5/10[/SIZE]
[SIZE=300%]Heat[/SIZE]
with a definite fruitiness from the new chillies that is unmistakeable.

There are still some definite red chilli notes to it aswell but nothing that couldn't potentially come from the bonnets themselves so, while I can't say for certain, I think it might be all scotch bonnet now.
Or, perhaps, all jamaican mushroom pepper. A chilli that looks a lot like some of the many scotch bonnet shapes out there and a has very similar flavour but just a little more of your standard red chilli notes and a good bit less heat.

It's entirely possible that someone might mistake the jamaican mushroom pepper for a scotch bonnet but it's also entirely possible that this is a blend of bonnet and the more generic sort seen in their basic jam or that the lower than expect heat and greater red chilli flavour is simply a result of the way its cooked.

The differences between the two peppers are subtle so I can't actually say which they're using with any certainty. I do doubt that it's a blend, though, as the vast majority of the flavour is still quite obviously jamaican chilli. A much loved taste in the chilli world.

If you love scotch bonnets, this jam will definitely be for you, regardless of which chilli really goes into it.

And, in terms of usage, this one can be used in all the same ways as their regular chilli jam but there are plenty of other applications for a touch of scotch bonnet (or jamaican hot mushroom pepper) in caribbean cooking too.

And, because of their pure, sweet, pepper flavour, both of these jams will work wonders if you shake a spoonful or two into tequila and smooth orange juice, then strain for a novel take on the classic sunrise cocktail.

As I hinted at in the beginning, the Jam Horse don't do anything fancy with the chillies but the simplicity of these jams is not a failing. Their purity is their strength and, while some may prefer a little more complexity, others will really appreciate what they bring to the table.
You must log in or register to reply here.