I recently planted a large garden full of peppers in hopes of making my own hot sauce for friends and family.  I have been lurking this forum and reading about how to grow peppers all over the internet, and I'm really trying to do this right.  I have probably 20 different pepper plants, some I got from garden stores, some from Burpee online, and some from another well-known chilli pepper plant vendor online as well.  I am also growing lots of plants from seed, although they are only about a month old right now, so I'll hope that they will produce by the end of the season.

Anyway, about two days ago, I transplanted these two plants into these buckets (that I drilled several holes in the bottom of for draining).  The soil in the buckets is a mixture of mostly organic potting soil, organic raised bed planting mix, and then a little bit of some sandy local dirt from my yard.  For reference, I'm in the Bay Area, CA where for the last few weeks the weather has been beautiful, 65-80 degrees in the day (sunny too!) and 50-60 degrees at night.

This plant was not wilted and looked fine just about two days ago, and now it looks like this: 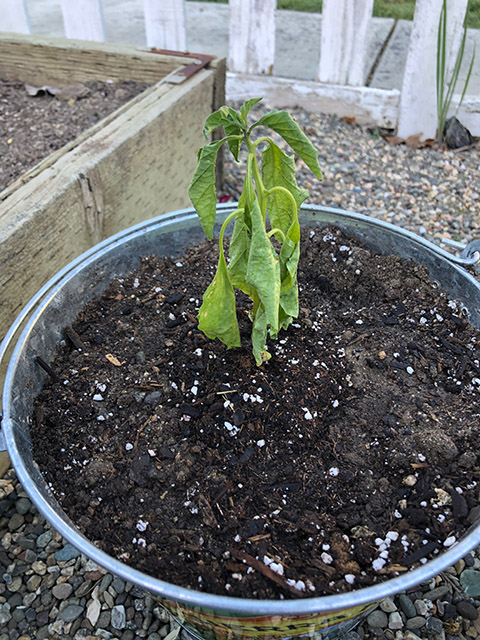 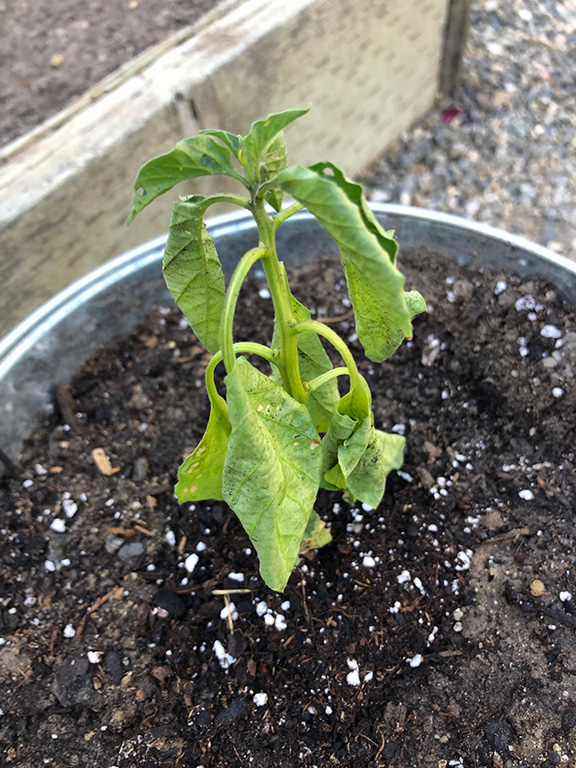 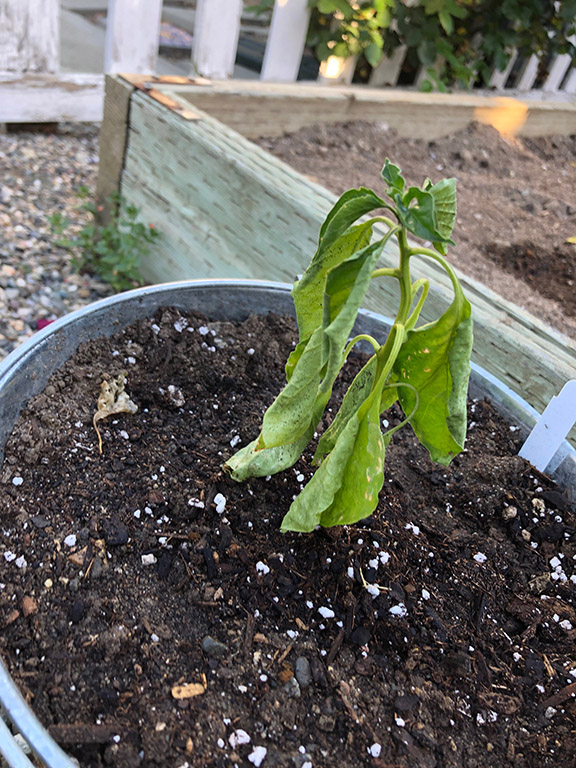 Is this a problem with over-watering?  Under-watering?  I have read the "How To Grow Peppers FAQ" sticky, and it's hard to figure out exactly how much I'm supposed to water.  A lot of the store-bought plant's tags say "prefers consistent soil moisture" but then the chili plants I bought online from a popular grower came with instructions to basically not water them much at all, and "if in doubt about watering, DON'T!"  Is this maybe just transplant shock?  Will they bounce back?

This one is in the same type of soil, and was also transplanted about 2 days ago. 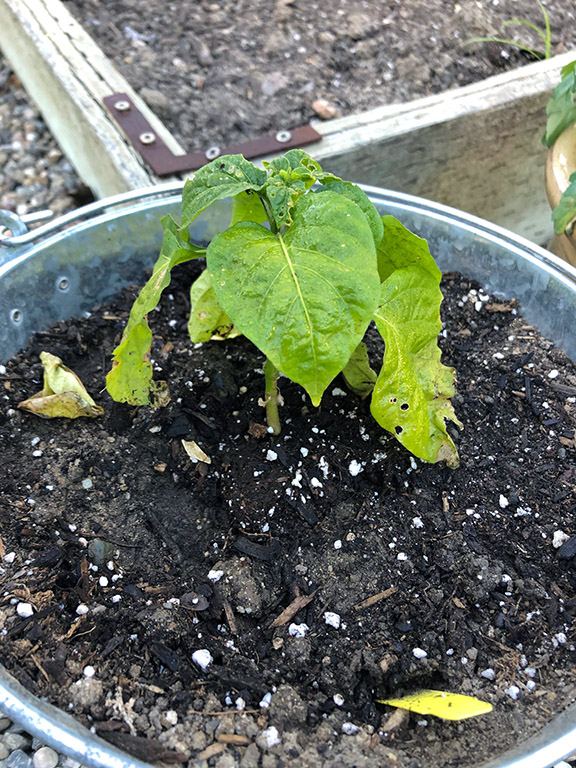 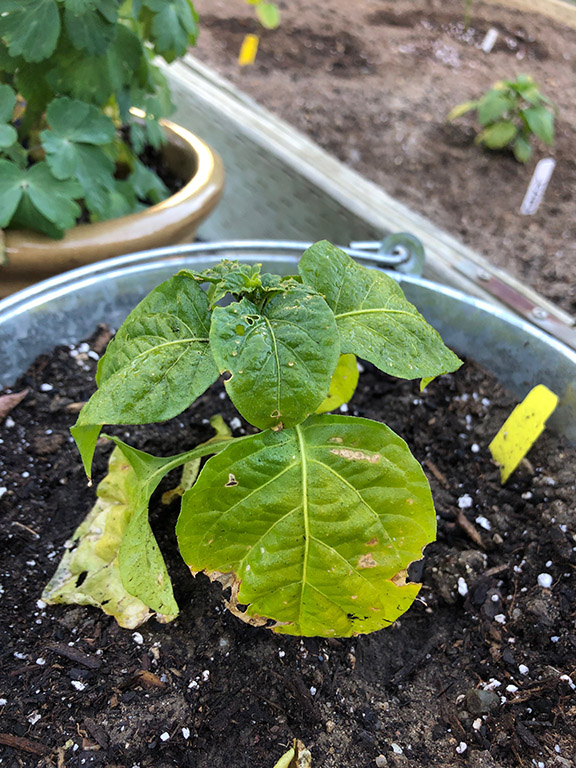 What could be going on here?

This is a Shishito, one of my favorite types of peppers ever to cook and eat.  This went in the ground about a week ago.  I have a couple other Shishito plants that look good so far, but this one does not.  This one is in a raised bed, and I took most of the soil out of the raised bed and replaced it with Organic Raised Bed Mix, Organic "Garden Soil" and also mixed in some chicken manure.  I also used a small amount of Jobe's Organics Tomato & Vegetable fertilizer and mixed it into the beds as directed, but I did that about 3-4 weeks ago, long before anything was transplanted into the beds. 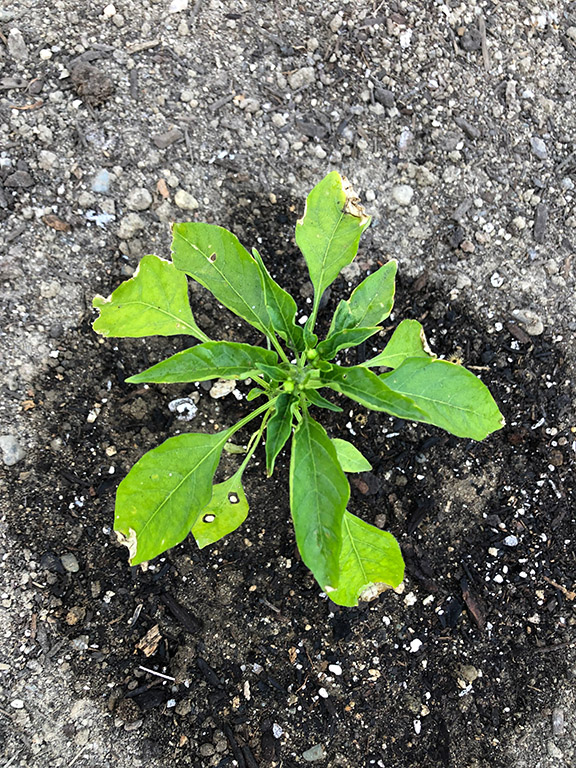 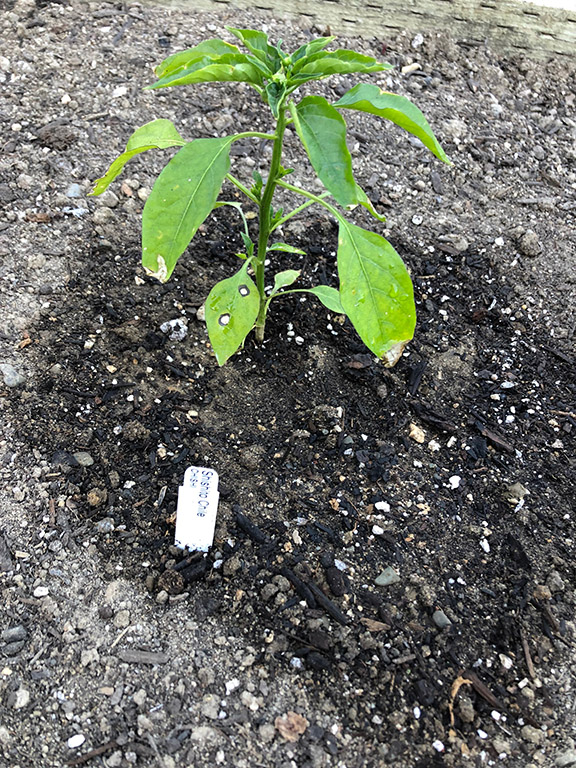 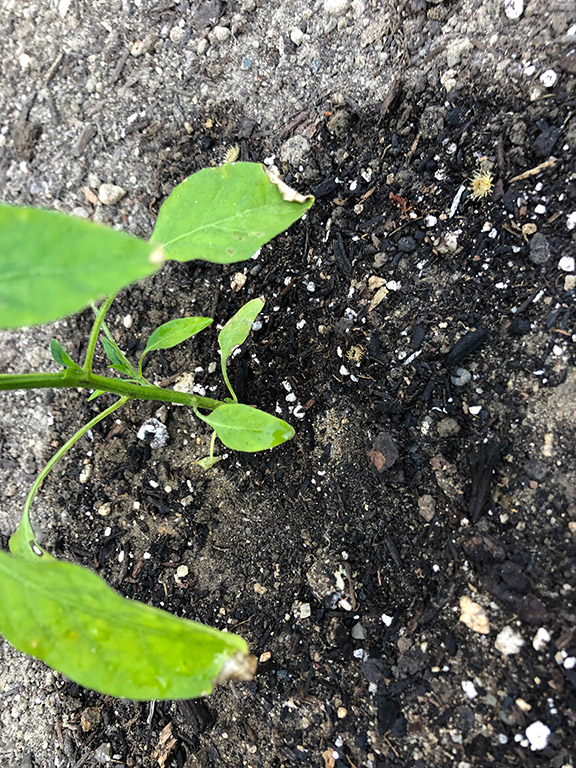 Thank you guys for your time!  I have been lurking here for a while, and decided to make an account so that I can get some more insight from you guys as the season continues.  As it is, I have about 20 pepper plants (and tomatoes, onions, basil, flowers, and lots of other things) going, and I really have no idea what I'm doing, and I've just been researching online and learning as I go along.  However, I was able to start several Habanero, Jalapeno, Anaheim and Basil plants all from seed, and they look great (but they are still indoors for now, as they are only a month old.)

I've invested a lot of time, energy, and $$$ into this Hot Sauce project, so I'm really hoping I can grow everything just right, and that it will all be perfect!

Thanks again for reading!

The top two have transplant shock. Just add sugar water to them and possibly add shade. Do not water the plants much. All the plants also look like theyre being eaten by bugs. Spritz neem oil on the plants.
D

Regarding the first two plants:

Were the plants grown indoors under lights and then suddenly brought outside into full sun?  If so, then they are indeed "shocked" by the effects of full sunlight.  I do agree with Speakpolish that you should give them shade.  If my suspicion is correct, then search the forum for "hardening off," and maybe one of us can link to some good advice for future grows.  Welcome to the forum and good luck with the grow and the hot sauce!

Well, I bought those plants online and they were shipped to me in a box, and then I opened the box and put them under growing lights for a few days thinking that theyd want some light after being in a box for three days. (Again, I have no idea what Im doing) and then I moved them outside for a couple weeks, where they seemed fine, then transplanted a few days ago.

Ive read all about hardening off, but I had assumed that plants shipped from a nursery probably wouldnt need to be hardened off as much, since they were most likely stored outside anyway?

Either way, the plants had plenty of time outdoors, and really only started to wilt once I transplanted, so perhaps it is transplant shock. Do you think they will bounce back? I will move them into the shade, good thing I put those ones in pots!
D

Your clarification about the plants history conforms that the ailment is most likely transplant shock.  I would give them partial shade, not full shade.  If you are home enough, maybe it will be easier to move them a few times day.  I can't speak for the bug damage; I'm not too good at getting rid of bugs, but if you can get that under control and shade the plants, then I think they can recover.

Good advice from all above.  They should come around..I do have to comment on the Jobes...

Please compare the price of that to tomato tone, and the amount one needs to apply. Jobes is way, way more expensive to use

Update on this, those two top plants just looked like crap even a few days later, I replaced them with new plants.  Not sure what I did wrong with those, ordering plants online is kind of tough, seems like they don't like being shipped.  I *thought* that my local nurseries wouldn't have some of the peppers that I wanted, but it turns out they did, I was just too early in the season.

EDIT: I also bought some neem oil.  I think I will also start using epsom salt as well?  Some of the leaves on my plants are kind of yellow and sad, I'm wondering if it's just been too cold.  It's finally starting to warm up though.
F

It is difficult to diagnose "over the internet" from pictures alone, but to me it looks that there could be a WHOLE LOT off with your plants, possibly even a combination of things.

The 1st possibility, something went wrong when you transplanted, and you may have damaged some critical roots?
Then, the plants overall look bad to me (stating the obvious), possibly mould/fungus and can't even exclude bugs. The ends of the leaves, on all images, look like they had been exposed to water and now they are rotting or something.

But the state of the plant could also be from a more general problem with the roots like root rot, which can then lead to all kinds of issues.

I didn't like when you said "dirt from the garden", since this is a sure way to get mould/fungus. Especially freshly-transplanted plants would be very sensitive. Now from judging the images, it's also possibly the soil you mixed there is not draining well. Wouldn't be surprised if this root rot, also from overwatering. If the soil is draining too slow and stays moist for too many days (which it really shouldn't), add more perlite to make the soil airier.

You said you don't really know how much to water, but this isn't too difficult: It is always better to water LESS frequently. Water only when the soil is dry, when the entire bucket with the plant is noticeably lighter. When the soil is always moist and can never really dry out, this leads to root rot, fungus, mould and all kinds of problems.
It is always better to water a little "too late" rather than watering too often. Even if your plants are already starting to wilt a bit because they need water, they will always recover in a few hours. But if you water too often and your soil is always moist, this is very bad. And I think this is what happened here, in combination with the plant freshly transplanted.

Also..use fresh, bagged potting soil and no dirt from the garden. I mean the soil you mixed is a common factor in all these images. Something off with the soil.

Extreme Member
Good advice, all. I definitely would cut off the weird and
bug-eaten leaves and get rid of them, not left on the soil.
If you transplanted into sunny location, your plants were
shocked, then when the defenses are down, the bugs
zoom in and take advantage. the Shishito looks like it
will be fine if you remove the bad leaves.

Good luck, and welcome to the forum!
Every Pod a Victory! Life Force is Strong! \O__
Links to all my grow logs here.
You must log in or register to reply here.

A
health Help with growth on underside of Ghost leaves

B
container Curled leaves on new growth. Every season.

S
indoor Possible to get brances from this chili stump or?