It's been one hell of a day so I'm sorry that this is going up late (it's technically wednesday where I am) but this is what was posted on my blog earlier and trust me, you'll appreciate the cause of the hold up soon.

Greetings, spice lovers. Today it's time for a change of pace, something special I picked out before christmas but haven't had time to show you until now: 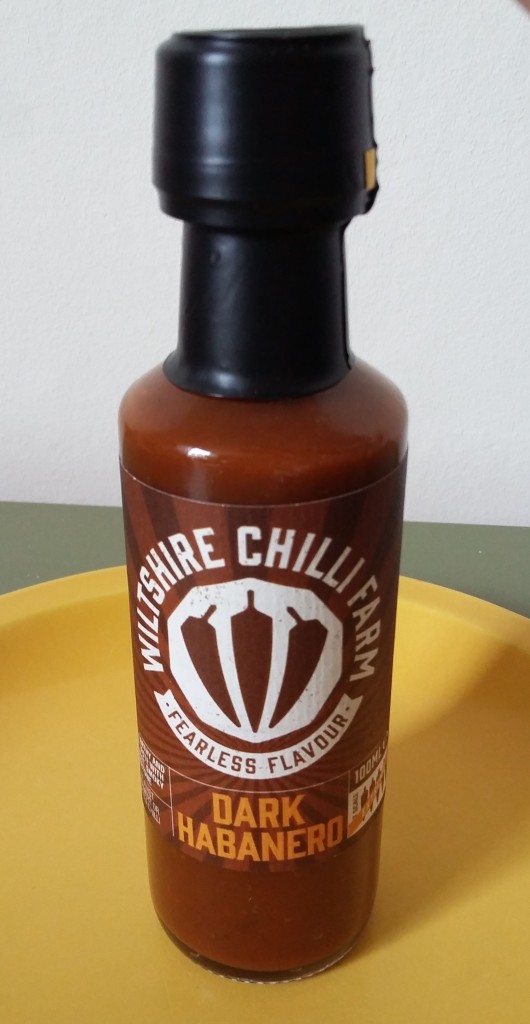 The Wiltshire Chilli Farm's Dark Habanero, a sauce supposedly as rich and dark in taste as it is in appearance.

This sauce is made specifically from the “chocolate” habanero, a dark cocoa-like brown breed of that well known hot chilli. It even has a smidgen of raw cocoa bean powder but, despite its cocoa content and “chocolate” chilli, the makers assure me that this isn't a chocolate flavoured sauce. In fact, they even had to change its name from Chocolate Habanero because too many people got the wrong idea.
It's only similarity is in its supposed richness.


And the labelling is a rich brown like the sauce itself, with the company's logo bold and central, using a solid white to stand out. It's an unorthodox choice but this simple colouration works well with their equally simple design. Three chillies cut into a decahedron, surrounded by the company name and the banner that holds their motto, “Fearless Flavour”.

We then see a thin-lined white box down below, which holds the product's name in bold, golden yellow letters, further adding to the sense of richness this colour scheme provides.

Aside from that, there's not much else of note on the front of the bottle but you'll find little blurbs all around the sides about who the company are, what the chilli is, what the sauce is and how to use it. That's not always the most exciting way to fill up space but this is a no frills specialist product that revolves around the taste of a single uncommon strain of a chilli. If you're the sort of person to whom that appeals, you're also the sort of person who's going to love that detail.

But, if that's not you and your only interest in the chocolate habanero is that its supposedly the hottest colour, you don't have to read all that. You can appreciate the purity of this sauce and the simplicity of its packaging. And, of course, its dramatic use of action lines.

That's right. If the chilli itself wasn't enough to grab your attention, perhaps the two background tones radiating out from just below the label's mid point will be. They are, after all, a classic comic book way of showing where all the action is without animation. A trick I'm sure the Wiltshire Chilli Farm are aware of, given their past comic book themed range.

In my opinion, they've done an excellent job on this sauce's packaging, conveying the rich, dark flavour and making it eye catching while still retaining that sense of simplicity you want for the bottle of a specialist single-chilli sauce.

The one thing I think they could do better is to waterproof it but, even then, this isn't poor quality paper. Just because it's not glossy doesn't mean it's not pleasing to the touch. That one issue really is quite minor unless you happen to be a stall holder.

But, just because I know what the taste should be and how well the label represents that doesn't mean I can review this sauce without opening the bottle so, without further ado, let's load up the spoon. 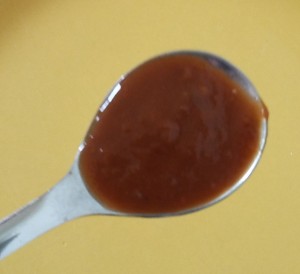 It flows from the bottle quickly and easily but this sauce isn't really all that thin. It's a good middling consistency, with small chunks and seeds proving that the entirety of each chilli went into this bottle.
With its upper

[SIZE=300%]4/10[/SIZE]​
[SIZE=300%]Heat[/SIZE]​
and powerfully floral flavour, though, this is not a sauce you can simply enjoy a spoonful of. I was warned that this one would have a delayed reaction but that isn't true for me at all. In the quantity I first tried it, the heat was an instant spread from the sides of the mouth to the back of the throat and it was painful.

It wasn't unbearable, by any means, but nor was this quite the product I was expecting. Everything I'd read had led me to believe it was hot but focused on flavour.
This was not just the upper three of a sauce that showcased the taste of a hot chilli. It was the serious stinging burn of the hottest habanero sauce I've ever had. This sauce does not sacrifice heat for flavour. Youch!

But still, I've eaten far hotter, as the fact it only reaches the top of a four will tell you. This sauce may hit me a little harder than some because of its particular brand of heat but, in all honesty, it's pretty manageable once you know what's coming.

No, the heat isn't my issue with this sauce. My problem with it is what accompanies that heat. An overwhelming floral taste with a back-note of sourness, slightly green as if the pepper weren't fully ripe. Or perhaps that's just how chocolate habaneros are meant to taste.
Either way, I don't like it one bit.

It can, however, be managed. By taking the sauce in smaller doses, or perhaps having it with a meal like you're supposed to, you don't get the heat quite as suddenly. Instead the burn, as well as everything that comes with it, creeps in a little more gradually, allowing you time to more properly taste the rest of the chilli. And all the other ingredients.

That taste is rich but not as strong as I was expecting. Which is probably why it gets lost so easily beneath that powerful floral flavour. It's sweet and earthy, perhaps even peaty, with definite hints of smoke, just like the company claim, but where that smoke comes from is unclear. Is it innate to the chilli like they suggest or is it from the chipotle they've added? I can't say for sure.

What I can say, though, is that I will not be adding this to mexican style chilli like I had intended. I ordered this expecting a bold, rich, dark, almost chocolatey flavour but the only strong flavour here is that habanero floral tone. Nothing else would come through in such a strong dish.

What would I use this for then? If anything, probably fish. That's a big “if”, though, because, quite honestly, I just don't like it.
You must log in or register to reply here.