This year I had the pleasure of growing out the 7 pot Defcon, purchased from Texas Hot Peppers.
The dry erase marker in the photograph below is red, the color rendition isn't very accurate on my tech. 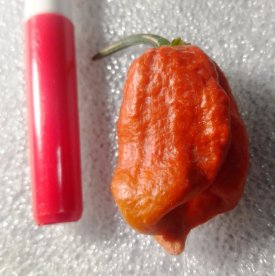 I have another one that I bell-cut to dry that shows how dark the color gets. It is a reddish brown brick like color quite like the tones of the forum website on my browser (at this time). 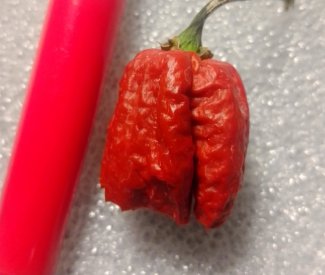 The color is a reddish brown but quite distinct from the color of most brown or chocolate forms. Brown peppers have red pigments and retain some chlorophyll when ripe, the combination of the red and green together ends up making brown. However in the case of at least this specific selection of 7 pot Defcon the color of the unripe berries is a light (nearly white!) green, reminiscent of the color of unripe Tabasco peppers. Unlike the green immature fruit of the other plants, which almost blend in with the leaves, the Defcon 7 pot berries stand out against the color of the plant, being much lighter in color than the leaves are. They have conspicuous furrows and little stinger like tips but the berries don't resemble the usual superhot phenotypes such as the elongated forms like Bhut Jolokias, or enfolding forms like Morugas or somewhere in-between like with Bhutlahs or Borg-9s etc.

In most of my berries of my other plants there are visible deposits of capsaicin containing oils in the pericarp and on the placenta, these oils tend to bright in color. Pure capsaicin is red in color and the more of it that is present the darker the oils containing it appear to be. In the case of the Defcon 7 pot not only is the amount of capsaicin containing oil (visible in the pericarp) more abundant in the berries than it is in my other superhots, the color of the oily deposits is considerably darker than those of my Bhutlahs and Douglahs.

Interestingly many of my plants exhibit heterosis (hybrid vigor) and their growth rates and statures reflect this. The Defcon 7 pot has smaller leaves and doesn't grow quite as fast or as big as many of my plants do, however it grows quite well nonetheless and was also one of the first plants to begin producing ripe peppers this season and most of them have already been picked. That makes it a bit earlier than most of my plants. (It would likely be a good candidate for grafting to a more vigorous stock)

Interestingly enough the selection of D7 I have does not resemble many of the photographs found online claiming to depict Defcon 7 pots, in those cases the berries resemble Chocolate Bhutlah or a jolokia/moruga intermediate phenotype and they lack the texture, the furrows, the shape and the color of the D7. (At least from Texas Hot Peppers)

I searched for further information on 7 pot Defcon both at the forum and out on the web and found almost none and that's a shame. It is one of the most impressive varieties of Capsicum in my garden this year.
Last edited: Sep 24, 2021

I was examining some dried halves of the D7 yesterday and noted the largest yellowish waxy deposits I've seen so far, in any dried pepper, of casaicinoidal material.

Though it's probably below the 9 grams of capsaicinoid oils per 100-grams of dried (which has been reported/published as a recovery for some super special hots), it seems like these peppers are weapons, not food.

Interestingly traits of C. chinense and C. frutescens are plainly visible in the D7 plants.

Were these genetically engineered for military capsaicin production?
Asking for a friend.
You must log in or register to reply here.
New Posts

W
pics Some of my Chili Peppers