Sweet and Sour Arrabiata (& some flakes to avoid)

Not sure if this belongs here or under sauces but here's the latest recipe from my blog, made as an attempt to combine classic Itallian spicy pasta with actual heat and something of a chinese feel.
It's a little silly and experimental but here goes:

Hey all. This month I wanted to re-explore the idea of mixing culinary cultures
so you can, should you want, consider the following recipe to be inspired by
may's fruit risotto.

The link is tenuous at best, however, since the only thing these dishes really
have in common is that they're both part-italian fusion foods. The risotto was a
fruity rice dish with japanese, moroccan and peruvian influences, while today's
penne a la arrabiata is a more chinese take on a classic tomato-based pasta one.

Because I was looking at recipes and thinking about making a hotter version with
more interesting chillies when I realised that all the posher arrabiata sauces
added in red wine.

By swapping that out for a (rather cheaper) red wine vinegar and adding in a
little extra sugar, suddenly we have the beginnings of a tart yet sweet sweet
and sour. Which, of course, paves the way for us to use one of the few dried
chillies that are popular in chinese cooking.

This dish would probably be excellent with the rich, roasted flavour of the facing
heaven rounds I used in my vegetarian mapo tofu but that's something to try
out another time. For now, I want to keep things a bit brighter and closer to my
recipe's italian roots.

I'm going to be using a dried habanero instead. A mexican chilli but one that's
popular in china none the less. 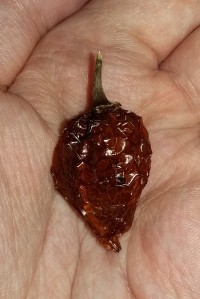 Of course, this would probably fit the two cultures a bit better were it a red chilli, rather than an orange one, but, after getting a burnt batch of jalapeño flakes recently*, I don't feel like trying my luck with more dried peppers that I can't see in person.
At least, not when I have a very similar pepper I already know the quality of.

And, in addition to this, you will need: 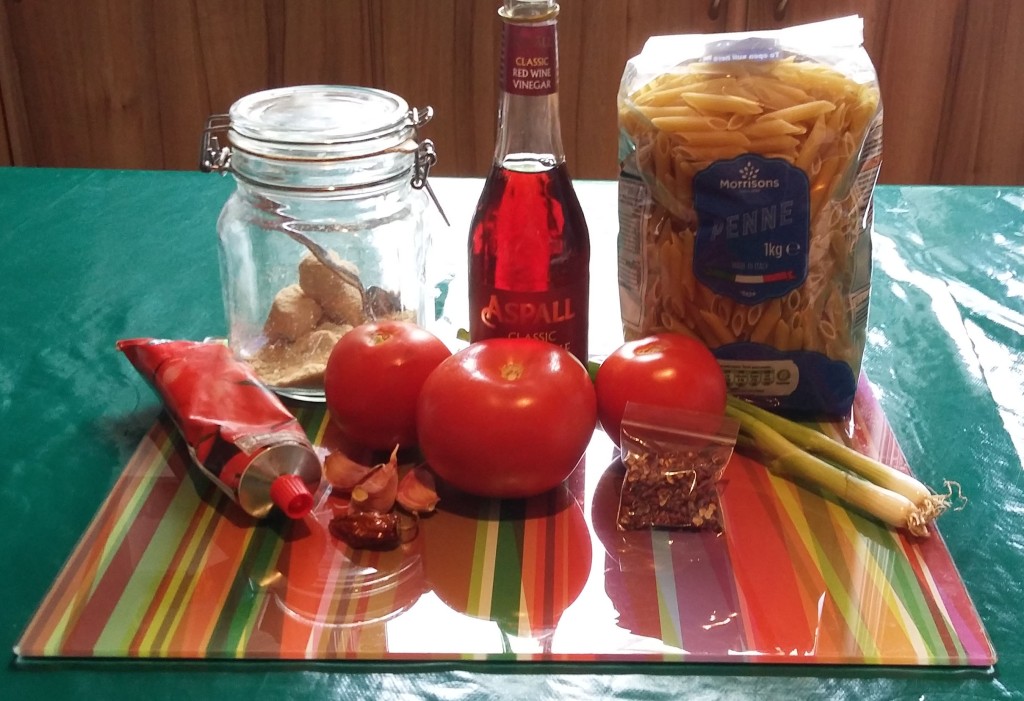 [SIZE=medium]First rinse the spring onions and get rid of its roots, as well as any shrivelled or dried up pieces of its greenery. Then crush the garlic and chop the two up fine.[/SIZE]

[SIZE=medium]While we're at it, it might also be worth preparing the tomatoes and peppercorns ahead of time to avoid being in a rush later.[/SIZE]

[SIZE=medium]The tomatoes can be chopped quite roughly but, unlike in my mapo tofu, the szechuan peppercorns should be ground to a fine powder. They're here for their flavour as a black pepper replacement, not being used for their numbing sensation, so you don't want to be biting into any bigger pieces.[/SIZE]

[SIZE=medium]And, now that everything but the chilli has been prepared, we can begin cooking. Just be aware that you'll need disposable gloves in a moment. Keep them handy for when you're shredding the pepper.[/SIZE]

[SIZE=medium]For now, though, heat up about a tablespoon of oil in a high-walled frying pan and and throw in the garlic and spring onions.[/SIZE]

[SIZE=medium]Fry them for five minutes or until the whites go somewhat transparent, then toss in nearly everything else. The purée, sugar, vinegar, salt, nutmeg, and peppercorn dust.[/SIZE]

[SIZE=medium]Stir until they've combined and then it's time to flake in the dried habanero.[/SIZE]

[SIZE=medium]Sure, you could chop it with a knife but it has a somewhat leathery texture to it, with skin that squishes and flexes more than it cuts. As long as you have the appropriate handwear to keep the heat off your fingers, you're going to be a lot better off just ripping it apart into the pan.[/SIZE]

[SIZE=medium]When that's mixed in as well, it's finally time for the fresh tomatoes. These will need to simmer into the mix for a good 20 minutes, while being squished down as they're stirred so that they mush down into a thick sauce.[/SIZE] 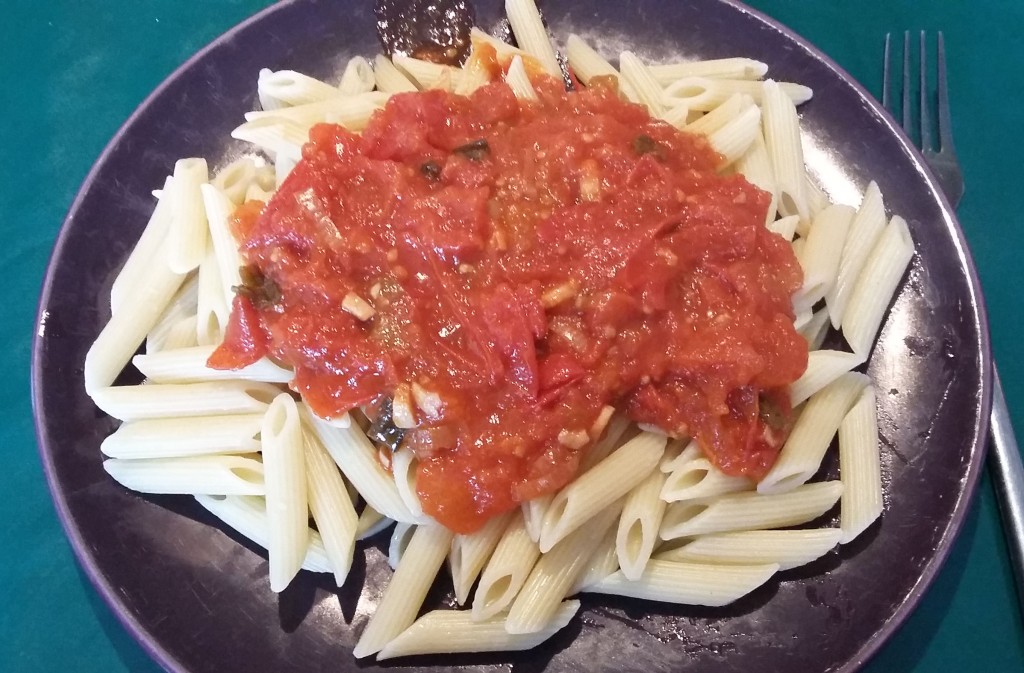 [SIZE=medium]If you like it hot, however, this is an excellent, sweet yet tangy tomato sauce with a definite red grape/wine undertone from the type of vinegar used. It doesn't have the blatantly italian herbs to it but it does have a little greenery from the spring onions and it actually winds up tasting somewhat chutney like.[/SIZE]

[SIZE=medium]Both its cultural influences are there and the arrabiata name, literally translating as angry, definitely suits something with such an upfront burn. The only thing that I'm a little confused by is how a single dried habanero has ended up significantly hotter than the two fresh scotch bonnets in my sweet potato stew.[/SIZE]

[SIZE=medium]Sometimes you just can't predict how things are going to turn out.[/SIZE]

[SIZE=medium]As for the penne, I'm afraid I can't help you there. I don't have the tools to make my own and, if I'm honest, I wouldn't bother anyway. I have no plans to infuse the pasta itself with anything and it's so much easier to simply buy a packet and follow the instructions.[/SIZE]

[SIZE=medium]Don't forget to salt the water, though, or you'll wind up having to put much more on post-cooking.[/SIZE]


[SIZE=medium]*Few places sell dried jalapeños as anything other than powder because they're very thick fleshed and rather juicy chillies. They're very hard to dry properly.[/SIZE]
[SIZE=medium]When I saw Chilli Wizard offering red ones as flakes, I assumed that they had found a way around this problem. Unfortunately, however, their solution seems to have been little more than overcooking them.[/SIZE]
Click to expand...

I once asked a old Italian dude what the arrabiata translation was? He said, it means "penne pissed off".

Great recipe, thanks for sharing SF

Sir, the heat level does not mesh with someone of your stature, you have 2 demerits, go see the headmaster... nice looking dish Spice!

one dish I cant get out of my head is the one D3monic made on page 2 of the ramen thread...look like it belonged in a museum haha

I've also had a lot of trouble drying Jalapenos, but I always figured there was some secret I was missing, given that Chipotle peppers are frequently just dried over-ripe japapenos.

I know there are chipotle varieties, but I'm pretty sure in the US they're almost always just smoke-dried Jalapeno-M. Maybe we all need to buy electric smokers.
I

I run a dehumidifier in my sunroom and hang them for a few weeks while picking them extremely early to let them be "thin enough" !
V

Went to Canada, must have been like 30 years ago, went to eat on this one place on Victoria Island, and asked for some hot sauce. They brought me ketchup.