Extreme Member
Since I'm already cooking mushrooms, why not cook more? Am I the only one knee deep in fungus right now?
Chicken of the Woods on the menu tonight, right along with Chicken of the Egg, Potatoes, Carrots, Spicy Mustard, Spices, Vegetable Oil. One pan sans mushrooms, for those who are picky.
Bake for about an hour.. 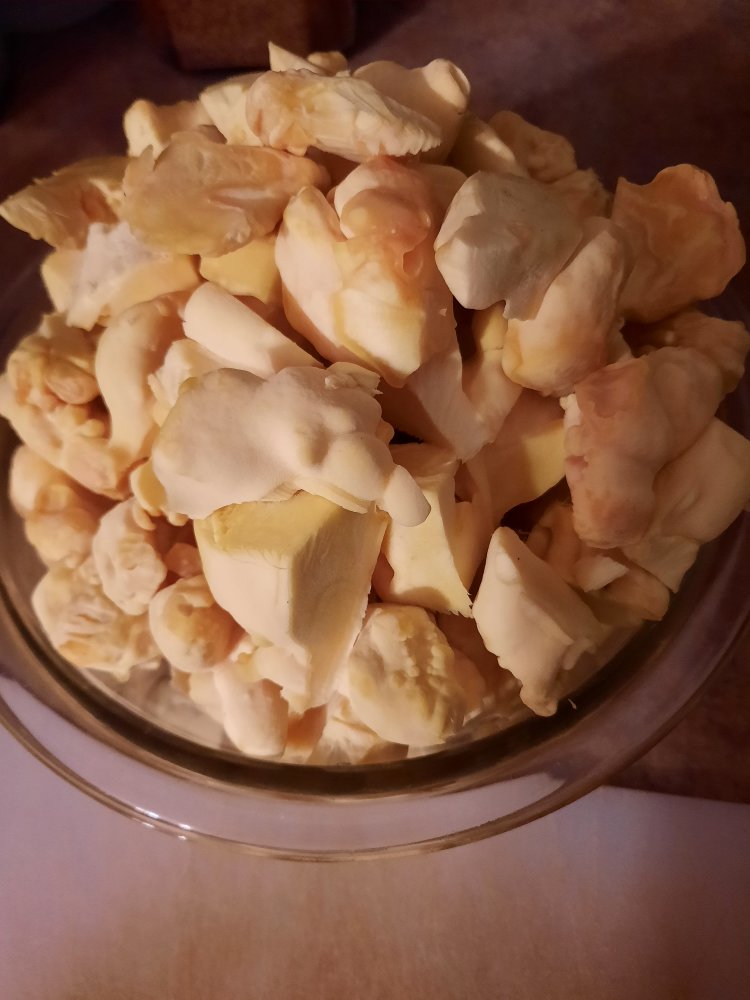 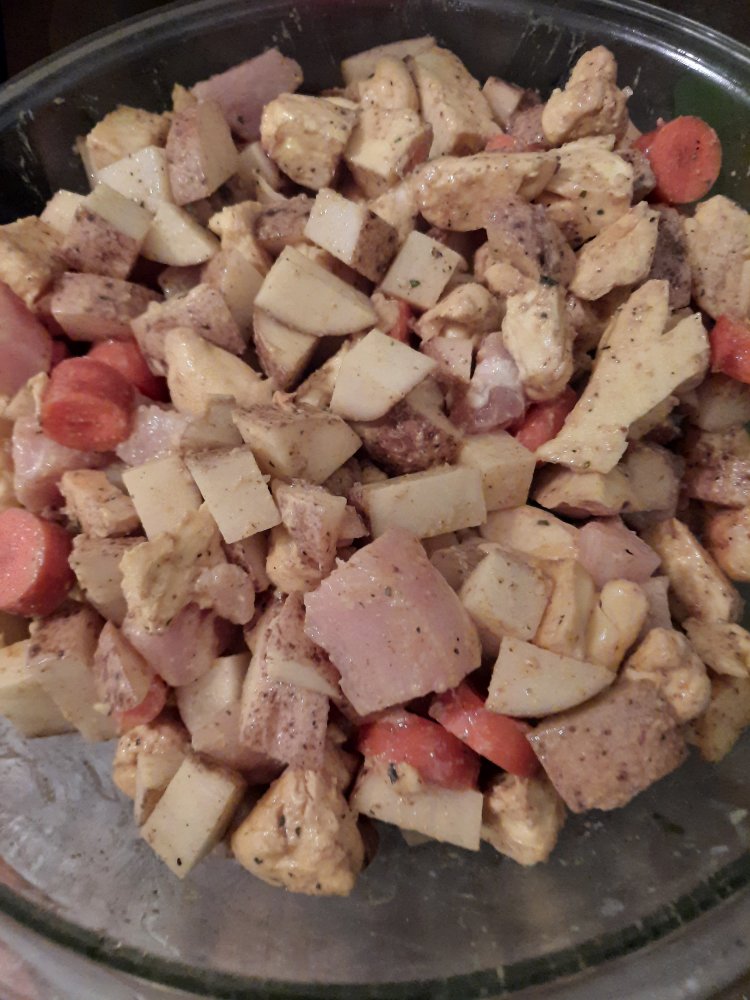 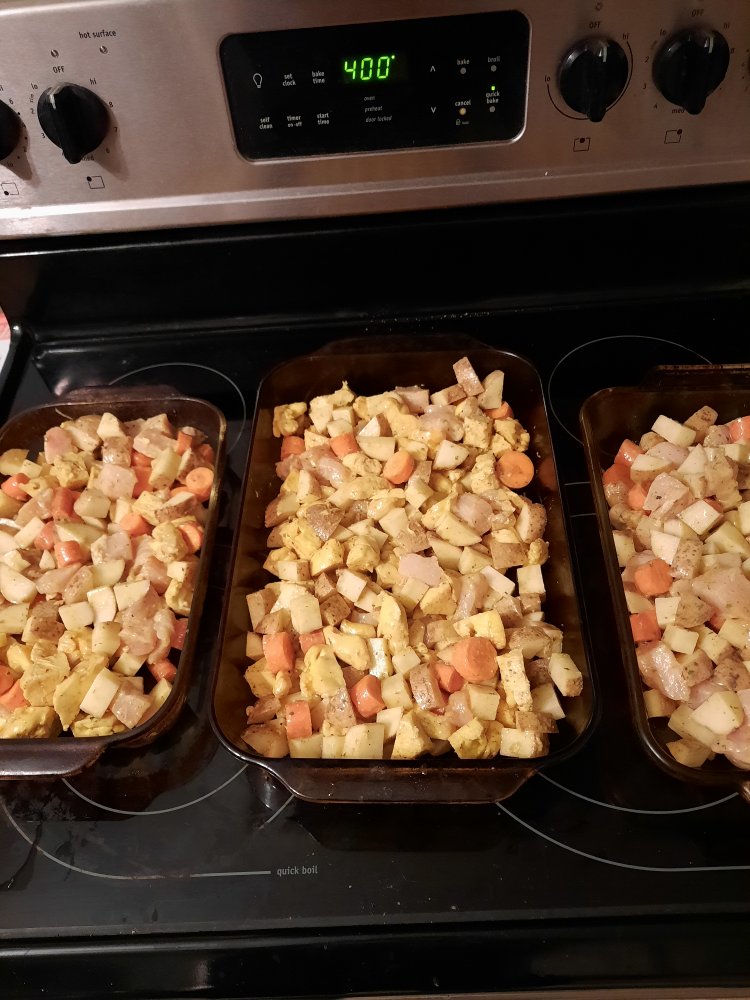 Extreme Member
With or without Cheddar.. I'm not picky. Mushroom was so tender. Never as good reheated, so I try to bring an appetite. Debating fourths now. Nice we use lots of mushrooms from the property. Chantrelle, Reishi and Golden teachers grow in abundance on the property.

I have two forms of edible Agaricus (white and brown button) that grow in my Zea patch, though only half a dozen have arisen this year.

This Utah drought is not mushroom friendly.
Last edited: Sep 7, 2021

Extreme Member
At least you know they are still kicking if they fruit. I keep mine watered when it's been dry. We're overrun with inedible Coprinoids in the yard here, but I keep hoping some of the other stuff will take. I'd love to find something edible that fruits as often as these Harefoot Inkies, they flush almost daily here.
There are patches of Marasmius around the neighborhood here, but I've failed 4 times now to get them established in this yard. I haven't even tried them yet, because I'm not eating them from curbside.
I keep planning to do Winecap beds, but it hasn't happened yet. I wonder if I'm going to have issues with the voles/mice when I do.

Right now the woods are teaming around here.. Clutches of summer oysters everywhere. I'm still sitting on about half a pound of Chanties, a half a grocery bag of Maitake, and skipped another Chicken Mushroom last night on our walk.. Honeys are starting to pop around here too, and Giant Puffballs.. If only they could space the timing out more.

I really want to try doing something with these, Laccaria Ochropurpurea, but they always show up when there's better choices. They are also all over right now, along with many others. Be sweet if the color held on these, but it doesn't. Extreme Member
First attempt at making trail rice with twice boiled Maitake broth.. Anyone have recommendations on dehydration in bulk at home? I could probably generate from 6-12 cups of this broth daily for making this rice.. If I can dehydrate it readily. So far this seems to be my best alternative for eliminating my waste flow in jerky making.
Muta sicut vulpes
Public Capsicum Library Collection

We have made Hen of the woods into a savory gravy using Condensed cream of Chicken or Mushroom soup
with Chicken & hot peppers over Brown rice.

Marturo said:
We have made Hen of the woods into a savory gravy using Condensed cream of Chicken or Mushroom soup
with Chicken & hot peppers over Brown rice.
Click to expand...

That sounds good! We are planning to use the InstaPot blender to make some sauce/gravy with some soon. We have way more Maitake than we can eat right now, so I'm trying to preserve it as best I can for later enjoyment.
You hunt your hens or raise them yourself? I've hunted them so far, but am going to read up on culturing them at home. This is a bumper year, but they only come like this about once a Leaper.
Muta sicut vulpes
Public Capsicum Library Collection

CraftyFox said:
You hunt your hens or raise them yourself?
Click to expand...

We hunt them in the Mountains, it's been a dry year so with some rains coming we hope for some good flushes of
puff balls, Hens, pinkies aka Meadow mushrooms, & all the September woods offerings.
Never thought about growing them hmmm I look into that. Thanks.

Extreme Member
I know absolutely NOTHING about mushrooms. These are growing at the base of my compost pile. 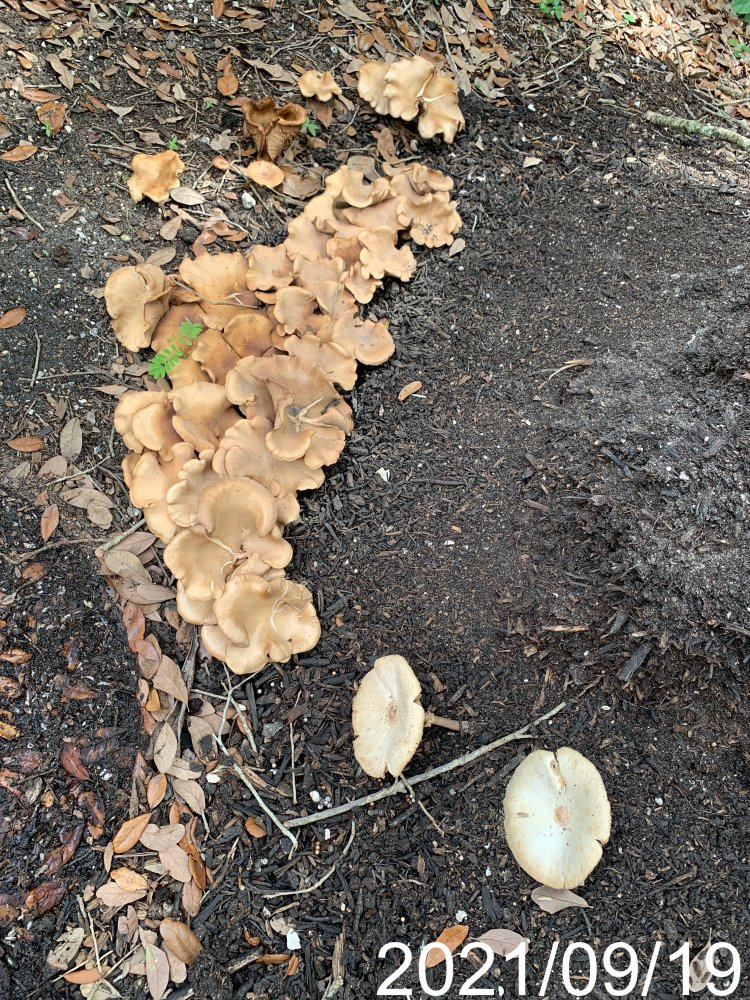 Amileta, Death Cap on the bottom.

Does anyone know what those other funny looking ones are?

Does anyone know what those other funny looking ones are?

Many Amanitas are not deadly although some of the most deadly, are found in their family.
I was lucky to be taught by some very old Mountain Men & Granny Women about mushrooms
in the wild.
1. First & really most important, " Their are Old Mushroom hunters & their are Bold Mushroom hunters
However there are no Old, Bold Mushroom Hunters.

The mushrooms in question are a common fungus found around saw dust & compost piles they are not poison
they just taste like cardboard, hardly Delicious like the Hen & many other forest fungi.

Extreme Member
Thanks for the info. I'll probably just mix them into the pile.

Extreme Member
We have the edible little Amanita up here, the little red/yellow one.. I've only picked it once, and have doubts as to my ever eating it. Tempting little fungi though. I don't know either of those two in your pile either, SB.

We've scored and dehydrated a couple Giant puffs already too.. Love the rich flavor those bring to anything. Most years it's hard to find them fresh, over softball size, but we're having a year of mini-basketballs and bigger this year. Pear puffs are out too, and I wish I had another dehydrator, but I end up leaving them. Maybe I'll get a bag next time we go out. Hope you get enough rain for some action, Marturo.. We've had a fairly blessed fall, so far. I've even grown sick of eating Chicken mushroom this year, which is pretty rare for me.

I've yet to try Pinks or either of the fall Blues.. I've definitely found a few of the Nuda, but wasn't confident about them at the time. Most of the woods around here are full of purple Corts, so I get a little sketchy with those colors still.
Muta sicut vulpes
Public Capsicum Library Collection

Funny looks like the little guy has found a Boletus Edulis yum!!

cuisines TexMex Night at the Relleno