Long-time THP veterans mourned the loss last August of Amarillo, Texas musician/songwriter/silversmith/chilehead Erin Mason, known to us here on the boards as P. Dreadie. Erin was an enigma, one of the most interesting and creative, yet gentle and loving guys I ever knew. Many of us may be unaware that he played harmonica in one of the original Austin, Texas bands of the early 1970s "Cosmic Cowboy" era, Alvin Crow and the Pleasant Valley Boys. When Erin decided to step off of Alvin's perpetually-touring bus and return to Amarillo, he travelled to Jamaica, fell in love with the Reggae beat, collected the best Scotch Bonnet fruit he could find, and his alter-ego Papa Dreadie was born.

In 2013 Erin sent me a few pods of the Scotch Bonnets he had been breeding, carefully selected descendants of the original fruit he brought back from the Caribbean all those years ago. I harvested every single seed from those pods, and stored them away, as I focused increasing attention on other varieties. When his wife Liz gave us the news last August that Erin had passed, I knew what I had to do with those seeds: a community grow in his memory. I have already shared about half of them, and I will continue to share them with experienced growers of the Scotch Bonnet until they are gone. 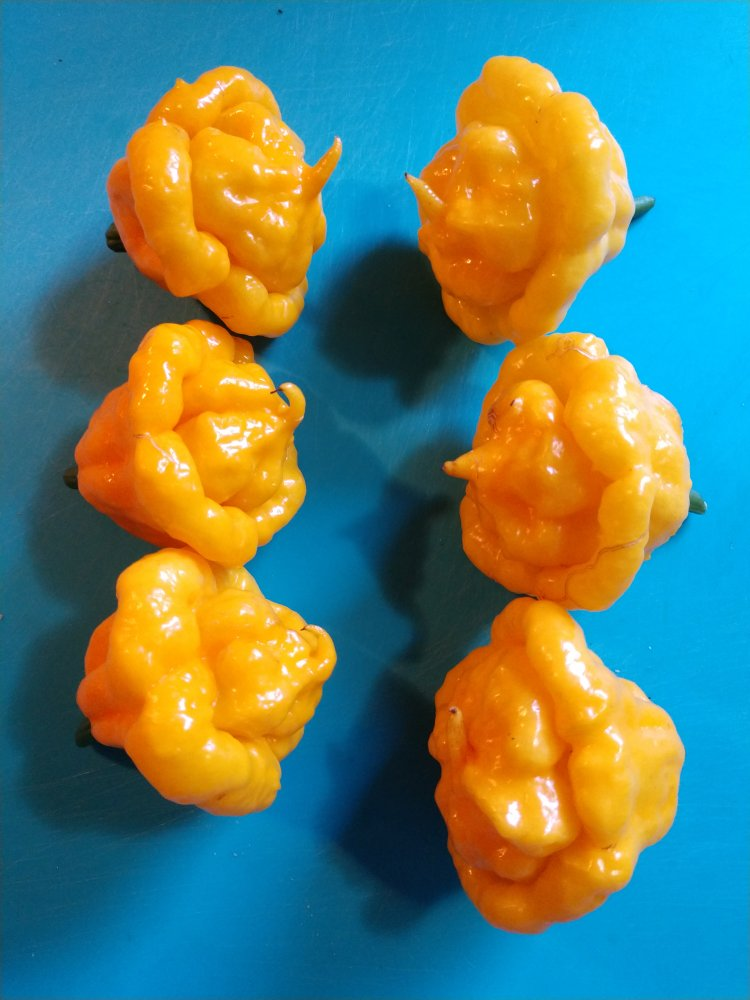 Thanks for the seed last year, John @Sawyer.
PDSB turned into my new favorite.
I'm good on seed this year. Gonna grow about 4 plants plus give a couple for my son to grow.
Thanks again.
j

JJJessee said:
Thanks for the seed last year, John @Sawyer.
PDSB turned into my new favorite.
I'm good on seed this year. Gonna grow about 4 plants plus give a couple for my son to grow.
Thanks again.
j
Click to expand...

You're welcome, JJ, glad I could help.

I realized this morning the Post Office is closed tomorrow. Seeds will start their journeys Tuesday.
Plants are people, too.

There's only one generation of the papa dreadie seeds in the envelope right? Otherwise I would really be in trouble!

I would have to grow them all...

MarcV said:
There's only one generation of the papa dreadie seeds in the envelope right? Otherwise I would really be in trouble!

I would have to grow them all...
Click to expand...

That's all I was planning to send, but I could include some G2-18 and/or G3-20, if I still have them. The latter are from the same plant pictured in post #900, but from the previous year (and refrigerated in the meantime). Let me check my inventory and I'll get back to you later today.
Last edited: Jan 16, 2022
Plants are people, too.

That was a good plan because I have no room left...

Sawyer said:
Two stamps each, global and domestic, remain for seed requests as noted above in post #892. Bad lighting here, but this is the G2-19 plant the seeds are harvested from: 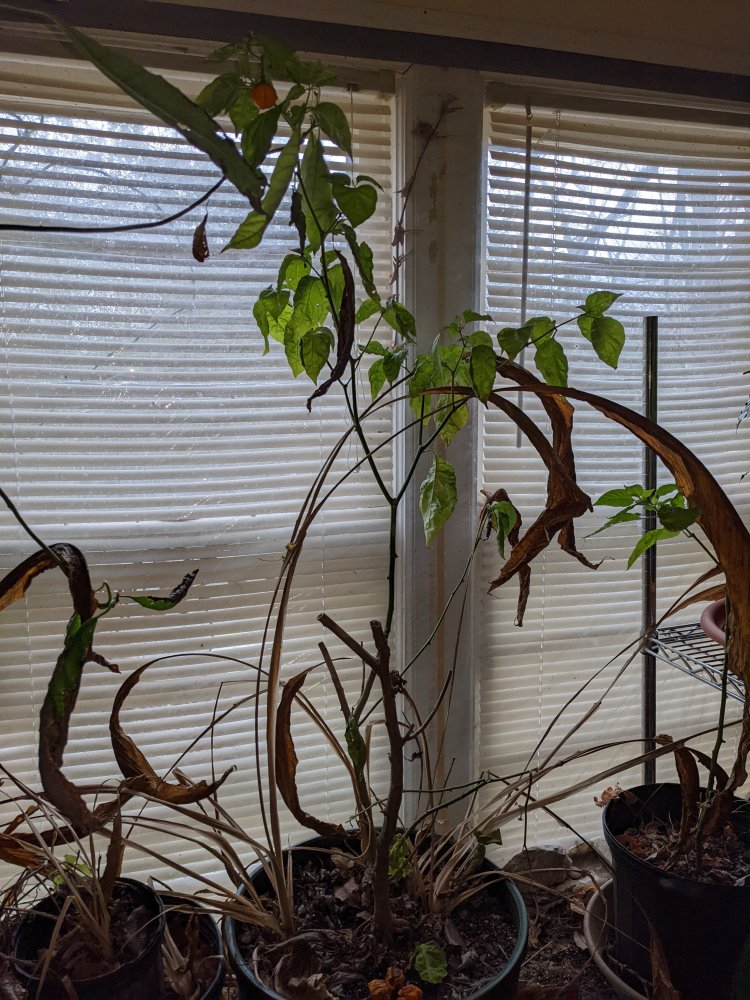 Germinated in '19, this is its third winter. I may have not posted a picture of it before, but this plant was originally grown on top of a spike deer skull, with the roots wrapping around and through the skull and down into the soil below. It looked cool, but the plant really struggled to start growing this spring, so I repotted it, removing the skull and resetting the plant up to the usual crown. That, and/or the turmeric companion plantings, were enough to kick start growth. (The dead plant material on either side of the pepper plant locates the dormant turmeric plants.) The plant had a lot more leaves when I brought it in for the winter, but almost to the day of bringing it in, rodents started stripping it. I think I've trapped and poisoned those villains into submission, at least there hasn't been any additional damage in the last few weeks.

This plant is grown from seeds from a pod like the one in post #814, possibly that very pod.

Apologies to those who've already placed their request for not getting the seeds in the mail already. I had a batch of carbon nanofoam to produce and get ready for the mail, too. Everything, including any new requests received this weekend, will go out in the mail Monday or Tuesday.
Click to expand...

Ditto. I'm in debt and I don't see why you should apologize for that

I was looking back at some of the pictures others have posted and I, too, have noticed that early pods often have a different shape. I haven't noticed the elongated pods, but this year's early pods had stingers. I don't remember now if any had the side prickles. The G3-21 seeds were collected from three or four pods that had the more traditional shape.
Plants are people, too.

Extreme Member
Not growing Papa Dreadies this season,
but have seed for future grows

Will be watching this thread with great interest.

Extreme Member
Seeds are on their way.
Plants are people, too.

Sawyer said:
Seeds are on their way.
Click to expand...

Many thanks John for taking the time to mail me the seeds...appreciate.PPATB.

Wiriwiri said:
Many thanks John for taking the time to mail me the seeds...appreciate.PPATB.

Sawyer said:
Seeds are on their way.
Click to expand... 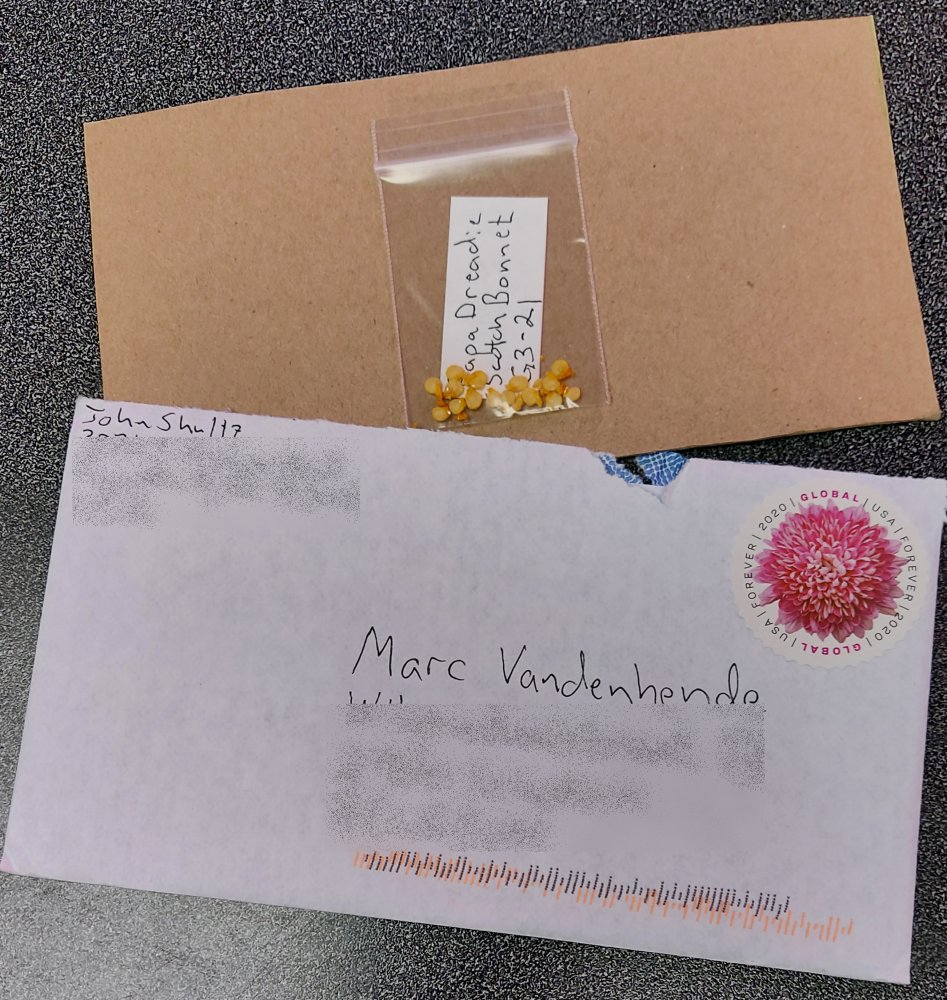 That's good to hear, Marc. You're welcome, and happy growing!

I've had confirmation of receipt of all but one seed request. Hopefully that one will turn up soon.
Plants are people, too.

I have put 4 seeds in the dirt. Let's hope they germinate soon!

I was going over this thread again and I thought... why don't we also have a memorial group grow of the Beth Boyd scotch bonnet?
Of course we would need some original Beth Boys SB seeds to get started...

Been checking the dreadies about every hour... sofar 2 have popped...
I have sown a total of 8 PD seeds

I've got 3 lots from my last year grow. One lot had a 5 point split on the cap and point so I thought I give that one a look.
I have 12-15 just potted up, but I've only planned on space to 4. Maybe I'll try some container growing for a couple. 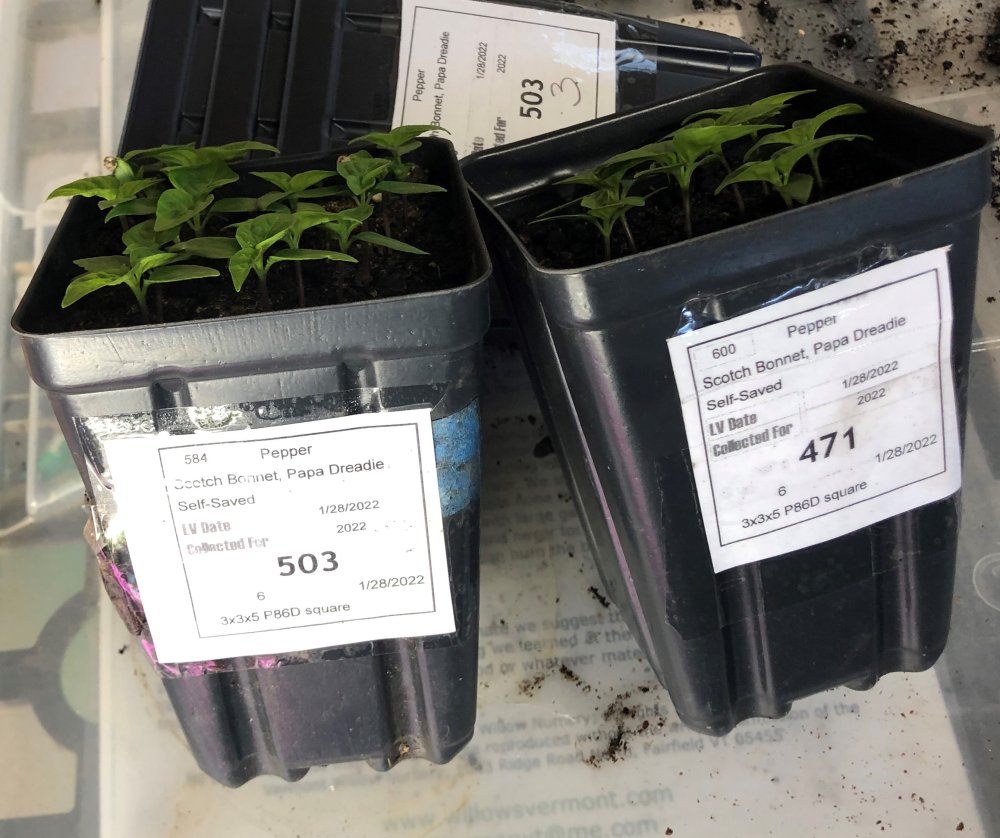