Extreme Member
Recently @Ger asked about using celery in a hot sauce recipe. I wondered what would happen if you used potato and apparently potato has been used in some sauces before. So I decided to experiment on Saturday.

I started with my standard recipe. I filled my blender jar with as many Bahamian Goats as I had (about half full) then added one yellow onion (cut into chunks), a bulb of fresh garlic, 2tsp salt and 1tbd sugar. I then peeled two medium potatoes and cut them into chunks and blended it all up. I added apple cider vinegar until I was getting a nice smooth blend with no visible chunks or bits. Sadly I had run out of my usual ACV so I had to use the walmart stuff. 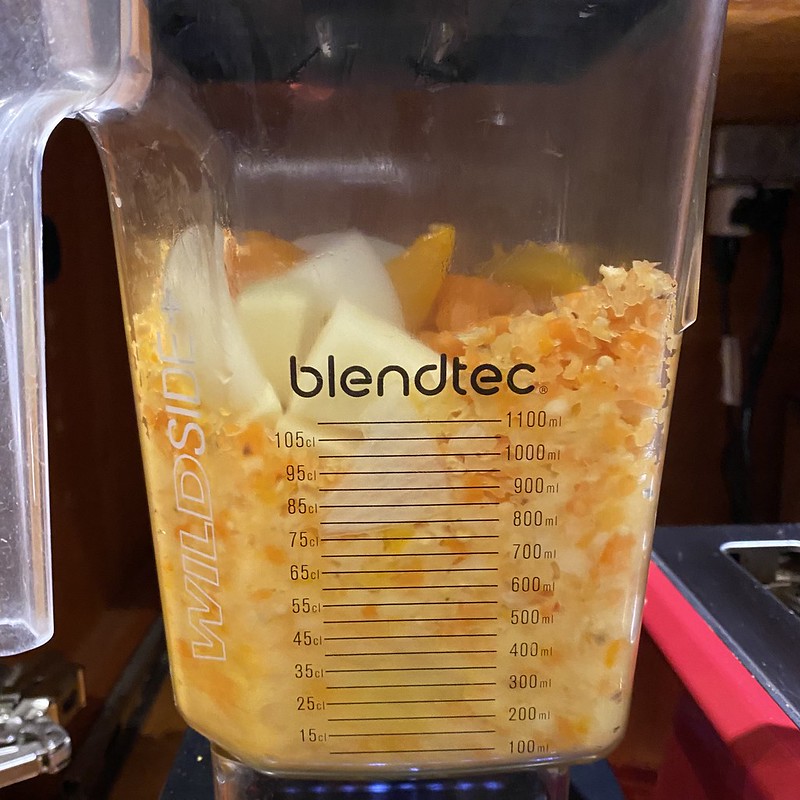 Then into the pot to cook. Before it got up to temperature, I checked the pH and it was 5.3. While I stirred and held the pH meter, my wife added more ACV until we got to a pH of 4. It took a lot more vinegar than normal and after looking at the charts, I'm not surprised. Potatoes have a natural pH in the 5.6-6 range whereas capsicum is 4.6-5.4. Remember that pH is a logarithmic scale so 4.6 is ten times more acidic than 5.6.

Anyway, I cooked away and it started foaming a little and then settled into a simmer. 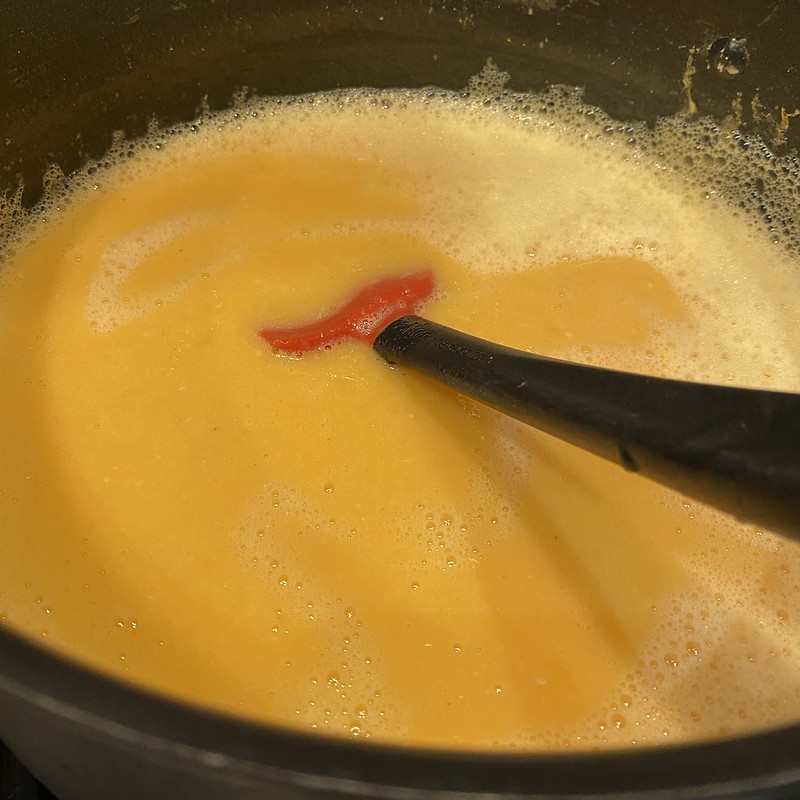 I usually leave my sauces on the lowest heat for 45mins to 1hr to cook thoroughly. By the end, it had gotten thicker - not simmering but burping like lava. I ran it through a fine mesh strainer then went straight into bottles. It poured fine through the funnels and filled the bottles with no problems. Given the thickness, I didn't add any inserts, I just capped and inverted. I did taste it and it's sharp!

So this morning I decided to try it out. I restored the bottles to their normal orientation and saw that the little air that was there struggled to move up the bottle. Uncapping one and it pours but just barely. 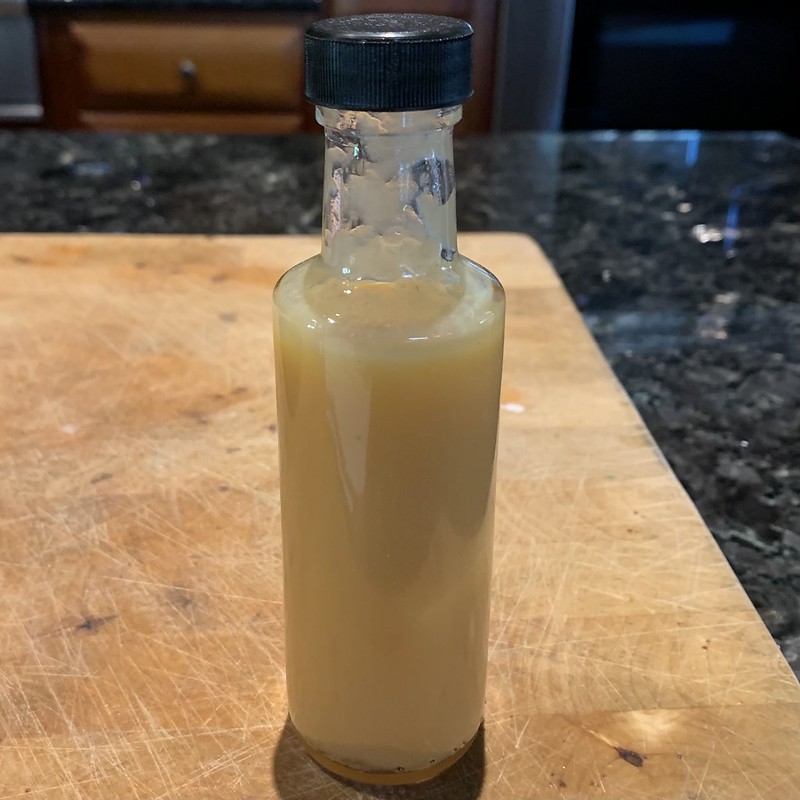 It tastes pretty good - I don't get any potato and the distinctive Bahamian Goat taste is there. But it's way more acidic than my usual sauce and far thicker - it only just makes it out the bottle. And the mouth feel is different - it has very slight grittiness that you feel with mashed potato before you add all the cream and butter. I like it - it's something different from the usual recipes.

I always make vinegar based sauces but this seemed to have more bite. Not that this bite isn't nice - I actually quite like it - but I wanted to recheck the pH so I busted out the meter and tested. pH 3.7! I didn't believe it, so I recalibrated the meter and tried again; 3.7. I don't know what's going on here. I tested pH 4.0 in the pan and acetic acid usually boils off faster than water so if anything I expect the pH to go up a little. Perhaps the potato is holding on to the acid somehow?

In any case, a fun experiment. I will definitely be adding potato to my sauces in the future to thicken them up. It doesn't change the taste much but I do need to solve the pH issue. Next batch, I will get to about pH4.5 in the pan and see what happens post bottling. I also need to get some more Korean apple cider vinegar (it's the best tasting large bottle vinegar I've found) and try again on the weekend.

Admin
I figured a pureed potato soup would be a good comparison to a sauce so I found some evidence to back that up:

What Kind of Potatoes Do You Use for Potato Leek Soup?
You can use either Yukon gold or Russet potatoes for this soup. Yukon golds will result in a creamier texture, and for this reason I recommend them over Russets, but both will work. Red-skinned waxy potatoes aren't the best for a soup like this, because they tend to hold their shape, when in this soup you want a potato that will purée well.
source
Want a signature for fun or advertising?
Extreme members can put text and a link here!
Extreme Biz members can put text, a link, and an image!

Extreme Member
That's great! I used Russet as it's the usual one we buy and easily available. I will try and see if I can get Yukon Golds... we don't get a great potato selection in my local grocery stores.

SL
PureEvilProducts
The Chile Addict's prayer-"Lord, grant me the wisdom to know it will be too hot, the courage to eat it anyway, and the serenity to accept the pain that follows. Amen"
PepperPeopleRock!

Admin
Does your pH meter have automatic temperature compensation? And what is the maximum temperature? A lot of the cheap meters only read accurately to about 120°. You probably have some false readings here if the meter does not have ATC and go up to boiling temperature accurately.
Want a signature for fun or advertising?
Extreme members can put text and a link here!
Extreme Biz members can put text, a link, and an image!

The Hot Pepper said:
Does your pH meter have automatic temperature compensation? And what is the maximum temperature? A lot of the cheap meters only read accurately to about 120°. You probably have some false readings here if the meter does not have ATC and go up to boiling temperature accurately.
Click to expand...

The pH meter is good for 32 to 122F but I tested in the pan while I started heating the sauce so it wasn't above 120F - at least it shouldn't have been! But next time I will test before starting to heat.

Admin
The cooled product will have the more accurate reading, that's when the acid settles from the food product. So your 3.7 cooled does not sound like a surprise.
Want a signature for fun or advertising?
Extreme members can put text and a link here!
Extreme Biz members can put text, a link, and an image!

I'll have to give this a go this week!

Extreme Member
I've been eating this sauce on everything over the last couple of days and I'm really digging it, especially the consistency. I'm going to do another batch as soon as I've been able to get H-Mart.

Nice Siv! I don't think I've ever tried a sauce with potato, but I've been meaning to experiment with some starches. One of my favorite bottles right now uses butternut squash and sweet potatoes along with super hots. Would never know it though unless you read the ingredients.

Curious to hear how your second batch goes, good luck with it buddy!

Extreme Member
I had picked some peppers about a week ago and some were staring to get a bit soft so I decided last night that I couldn't wait for the weekend to get better potatoes and vinegar. 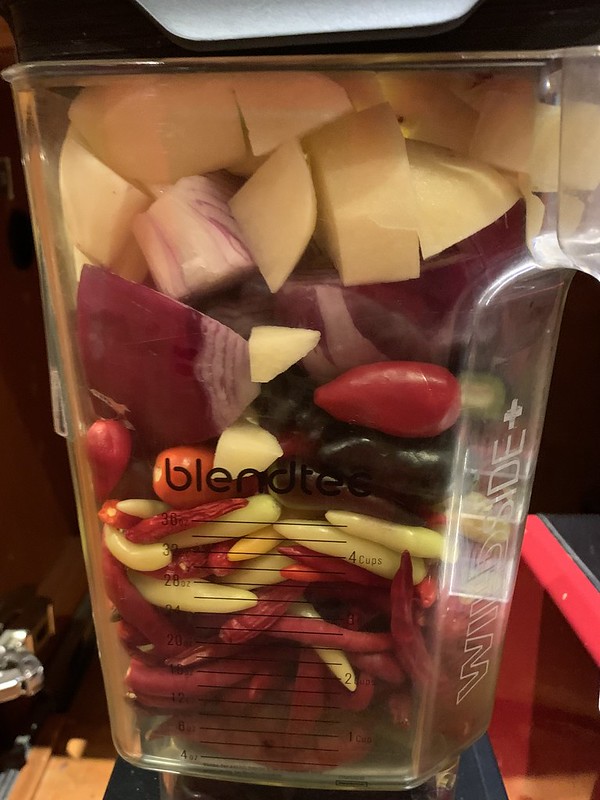 I remember buying some different vinegars from the Asian supermarket to try and thought this may be the chance. Sugar cane vinegar! It's 5% like most and isn't at all sweet. 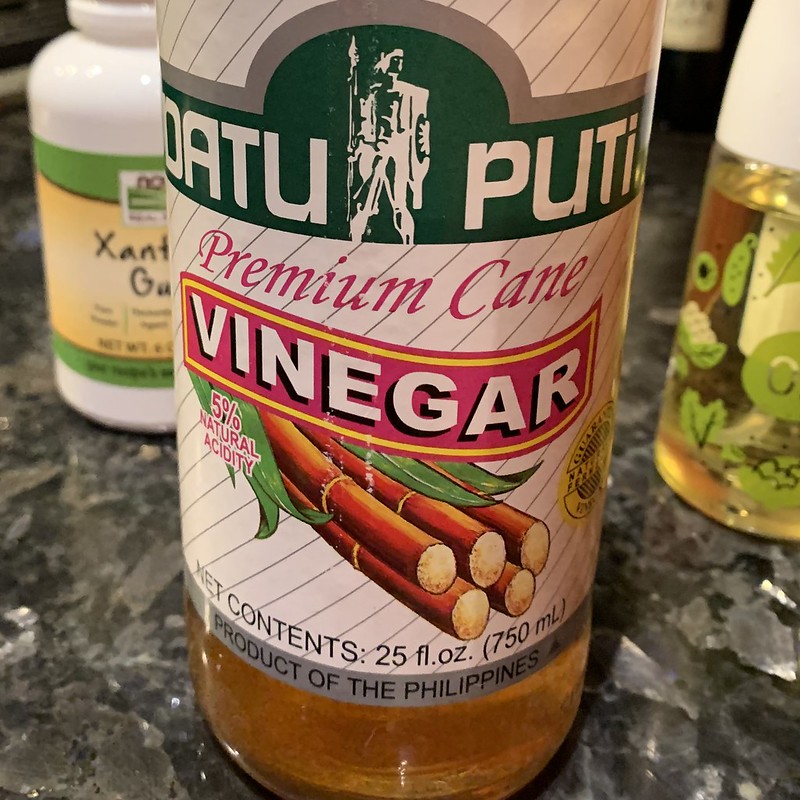 I blended and added vinegar to get to a pH of 4.2 being a little worried about going too low. Stuck it in the pot and cooked. 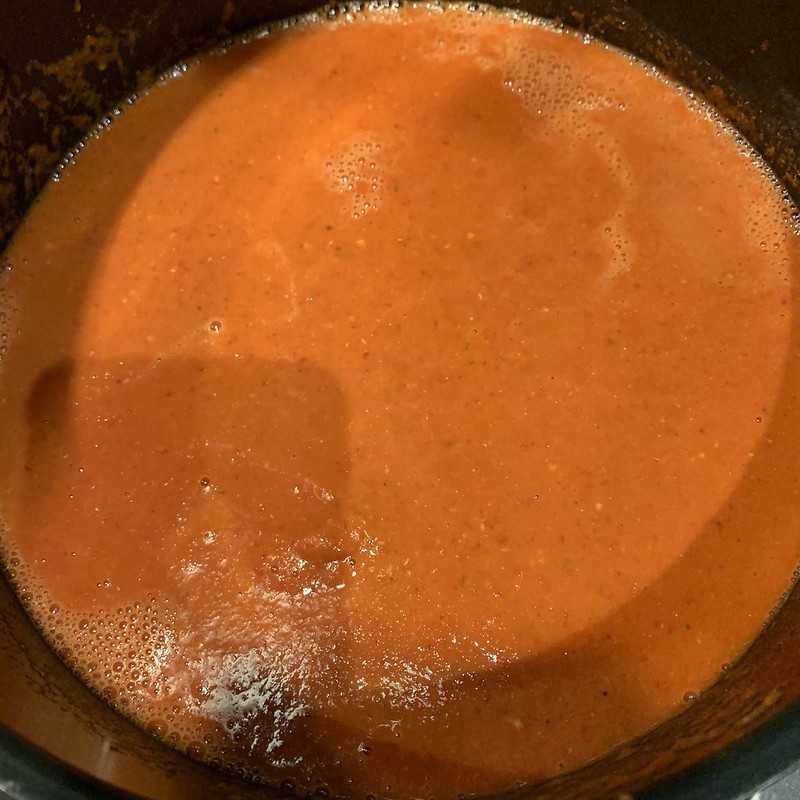 This turned out thicker than the last batch - probably because I added another potato. I added some orange juice and more vinegar to the pot to try and thin it down a bit but it didn't help much. It tasted pretty good so I strained as best I could (I always keep the leftover bits in the fridge to add to other meals) and bottled in larger 8oz bottles as I felt the small necks on the 3oz bottles would make dispensing almost impossible.

This morning I pulled one out and gave it a test. pH 4.1 which is OK with me for a home use sauce and not nearly as sharp as the last batch. But it's thick! You have to slap the bottle like ketchup to get it out. I like it! But I'm gonna have to find some kind of squeezy bottles to use for the next potato batch! 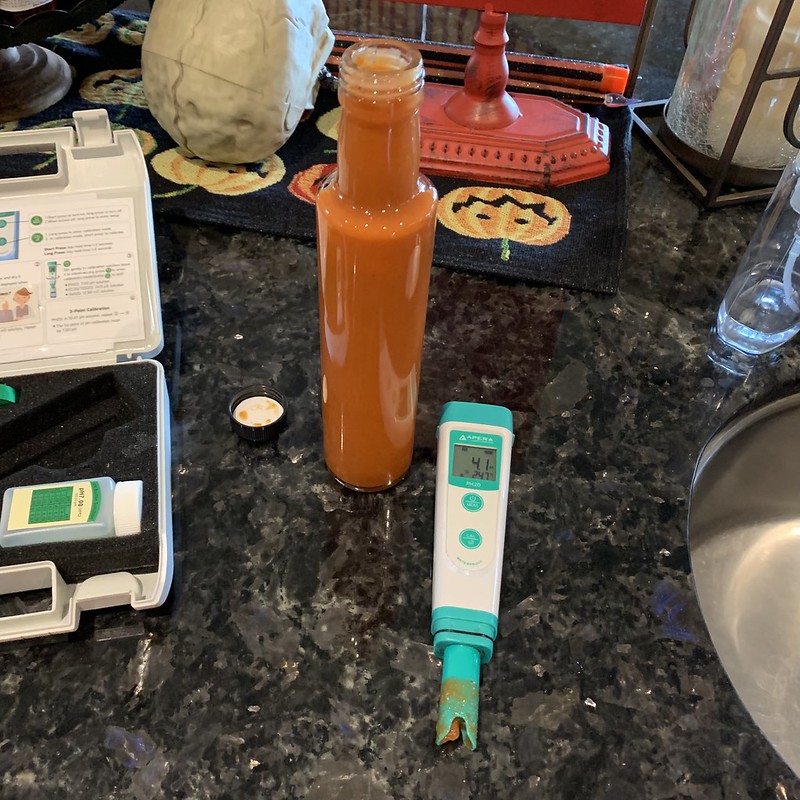 I do that with all my sauces - even if they're thick the separate in the bottle as I tend to keep my sauces for a long time. It's only a dash to help minimize the separation but it absolutely doesn't help reduce the thickness!

Some folks ( a VERY small percentage of the market) have a problem with xanthan. Most dont realize how many products contain xanthan. But what about carrageenan? Aka seaweed.

Use a little xanthan to maintain consistancy or use carrots/yams/apple/okra/etc....and have a bit of separation as the bottles sit.


Shake Shake Shake...all guuud.
PureEvilProducts
The Chile Addict's prayer-"Lord, grant me the wisdom to know it will be too hot, the courage to eat it anyway, and the serenity to accept the pain that follows. Amen"
PepperPeopleRock!

Extreme Member
This year I don’t have as many superhots as in the past as my wife asked me to grow more “cooking” peppers. So I’m a bit reluctant to experiment with my limited supply.

But this thickness with potato has gotten me really interested in experimenting with them more. And after watching some chillichump videos on making ketchup, I’m gonna try making some to try out various recipes. I’ll try both with and without xanthan. Of course this won’t be your grandma’s ketchup, there will be a ghost pepper or two thrown in there. Stay tuned!

Extreme Member
Well here we go! I semi-followed the ChilliChump recipe in one of his recent videos but added a few things

Started with roasting 1tbsp cumin and 1 tbsp black peppercorns and then ground them up: 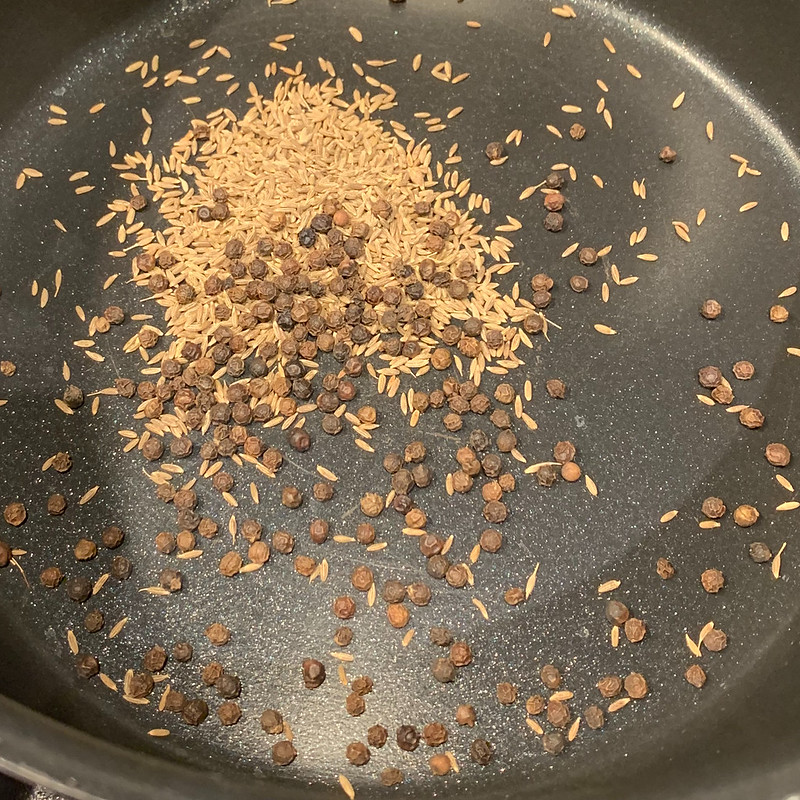 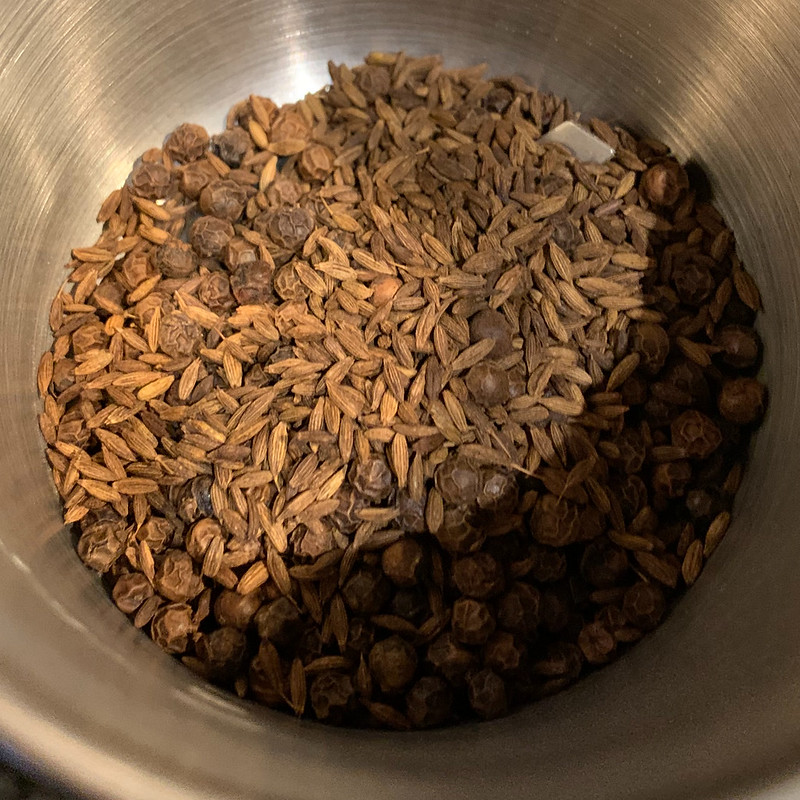 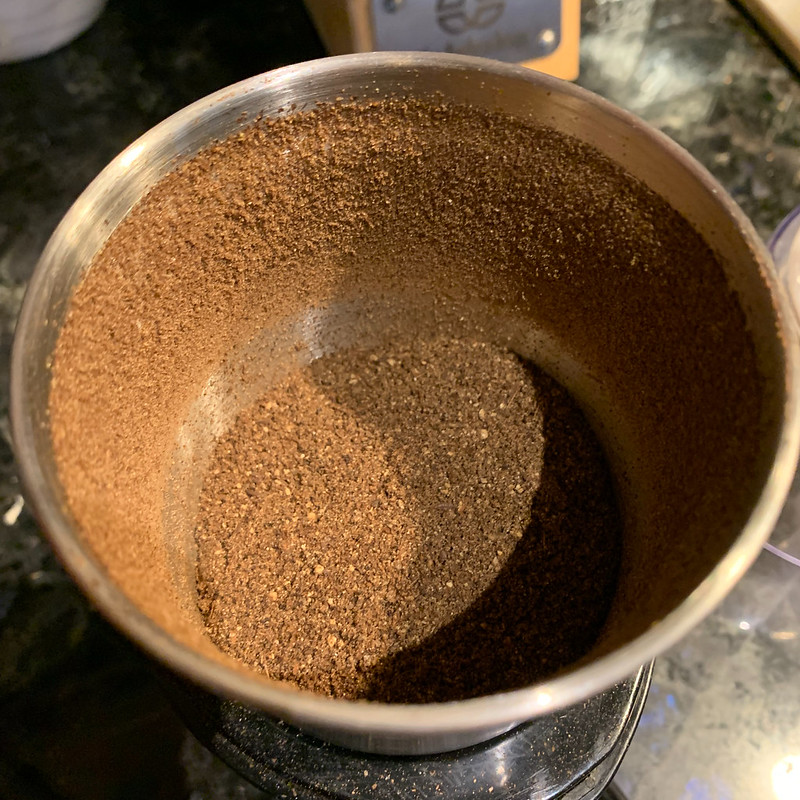 I found these canned tomatoes on sale in Kroger so bought a job lot. With some golden potatoes and my usual onion and garlic: 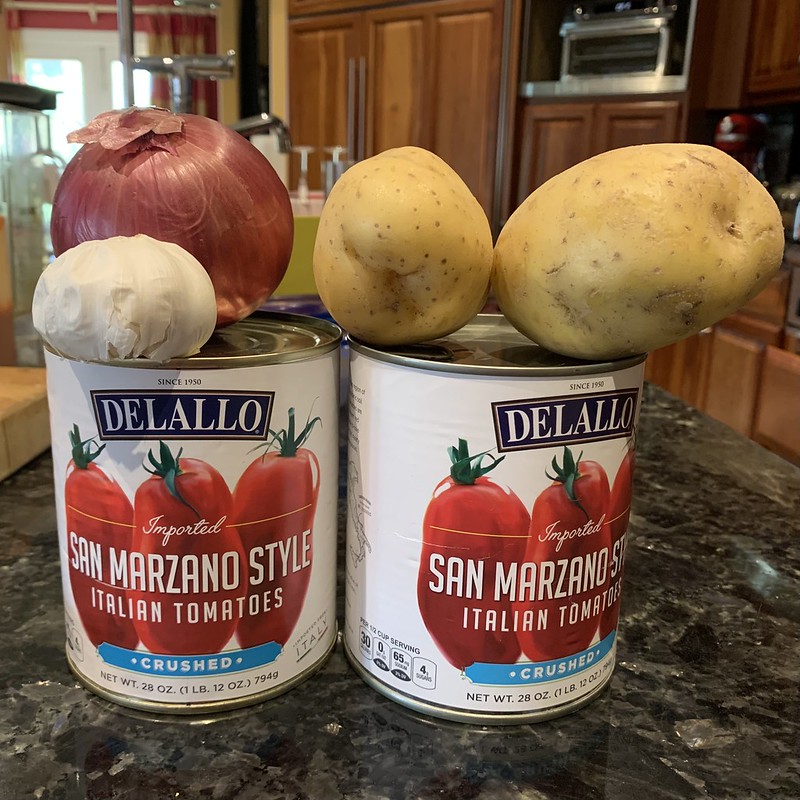 In the blender they go: 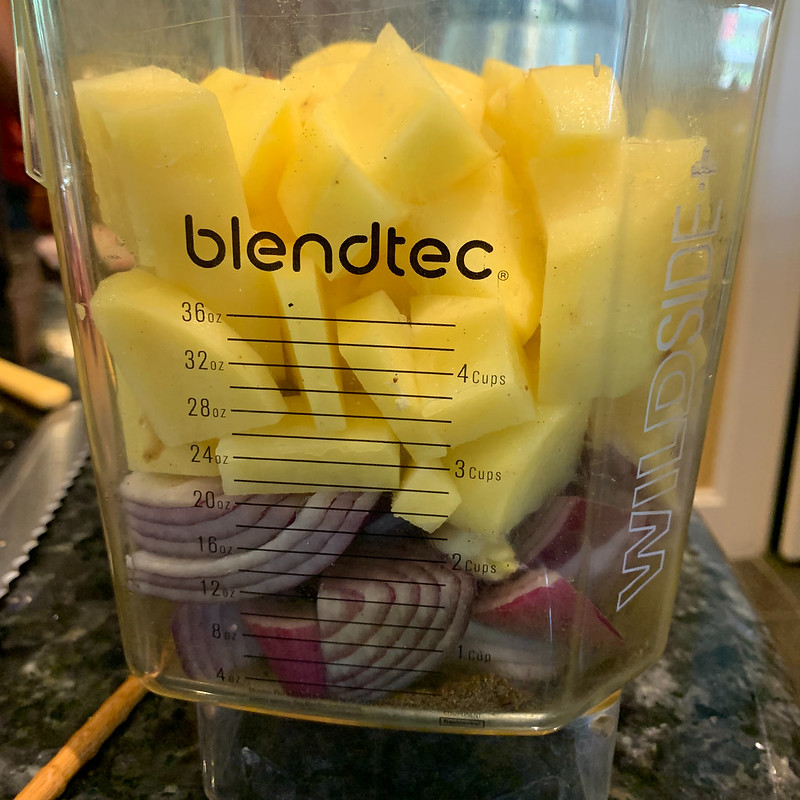 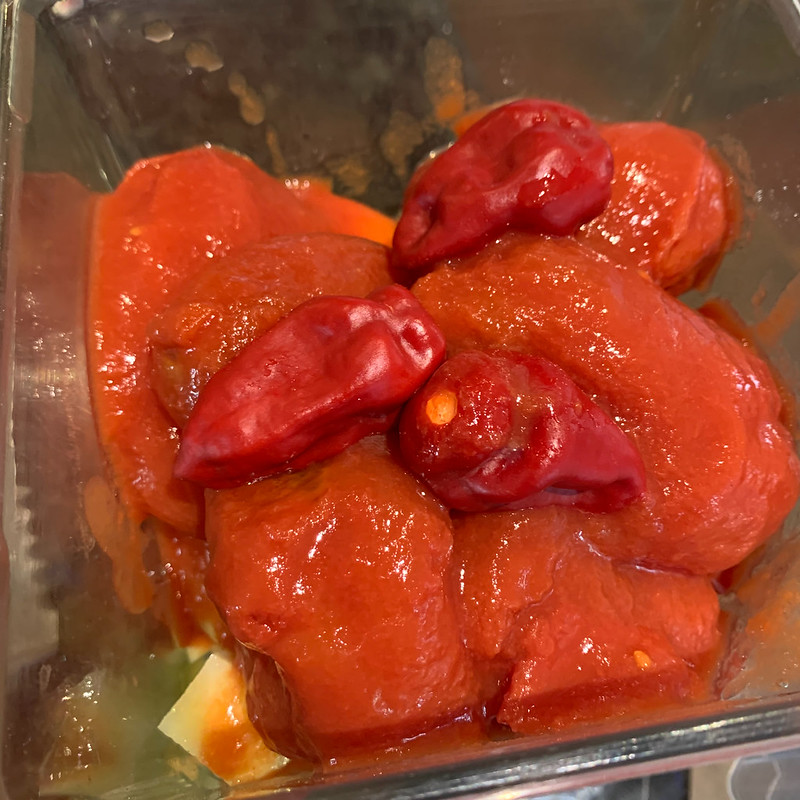 I blended everything but it was too much to do in one go in the blender jug so ended up having to do 3 batches. I ended up with nearly 3 liters of mash. Based on the recipe, it's 1:3 vinegar to mash but I thought I'd try with 500ml ACV to start with. Added it in, stuck it in the pot and checked pH: 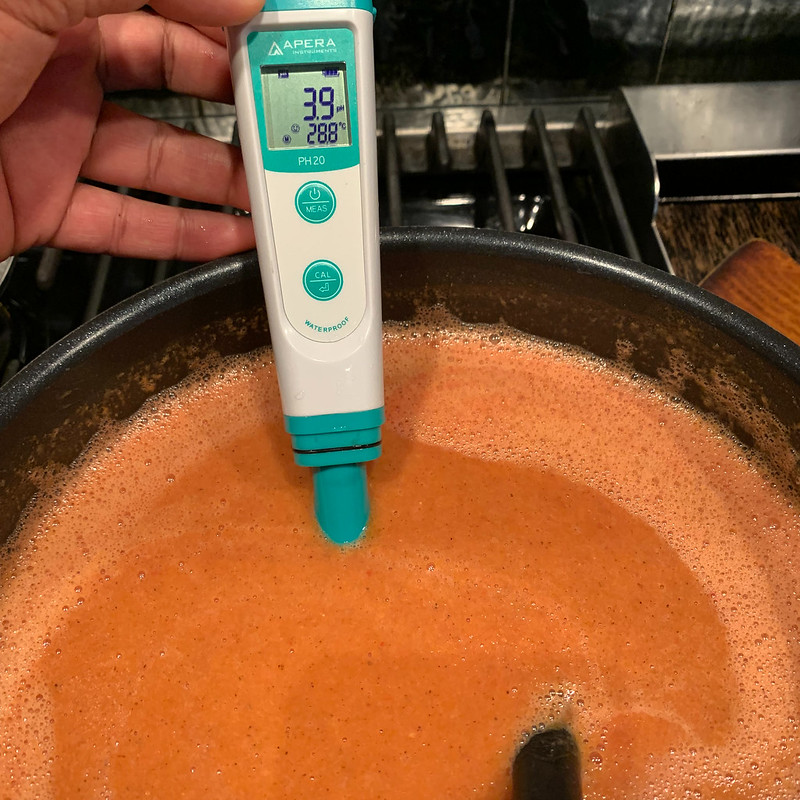 It hit 3.9 so I decided not to add any more vinegar. Simmered for an hour on low and strained through a fine mesh strainer and bottled. 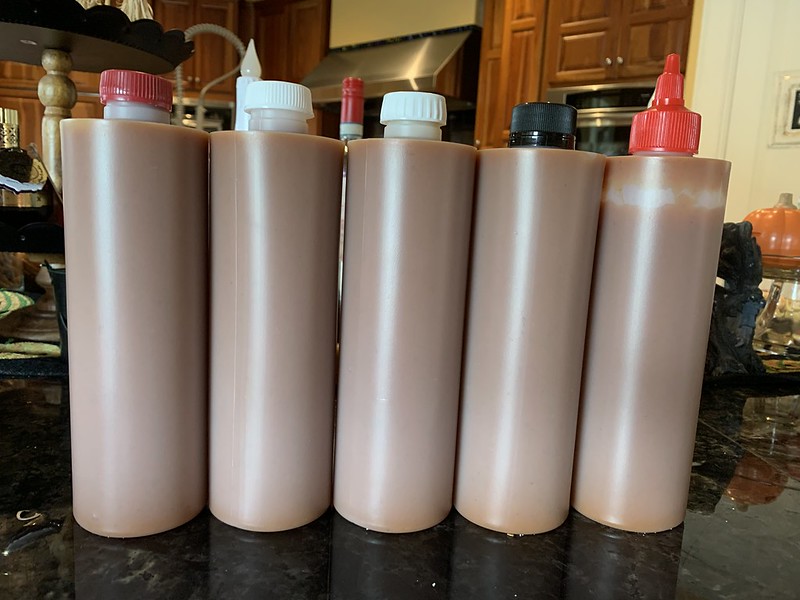 Overall I got 5x 16oz squeezy bottles from it. I was worried about keeping them capped with the dispensing spout but found that soda bottle caps fit so used those to seal them up. I need to find a source for better caps for these bottles.

Naturally it's not as red as ketchup but it's smooth, thick, has a nice sheen and a nice acidic/sweet flavour. In the back of the throat it's slightly spicy and peppery. But there is a little separation as you can see. I guess even real ketchup does this but I would be interested to see what would happen with a little xanthan gum. 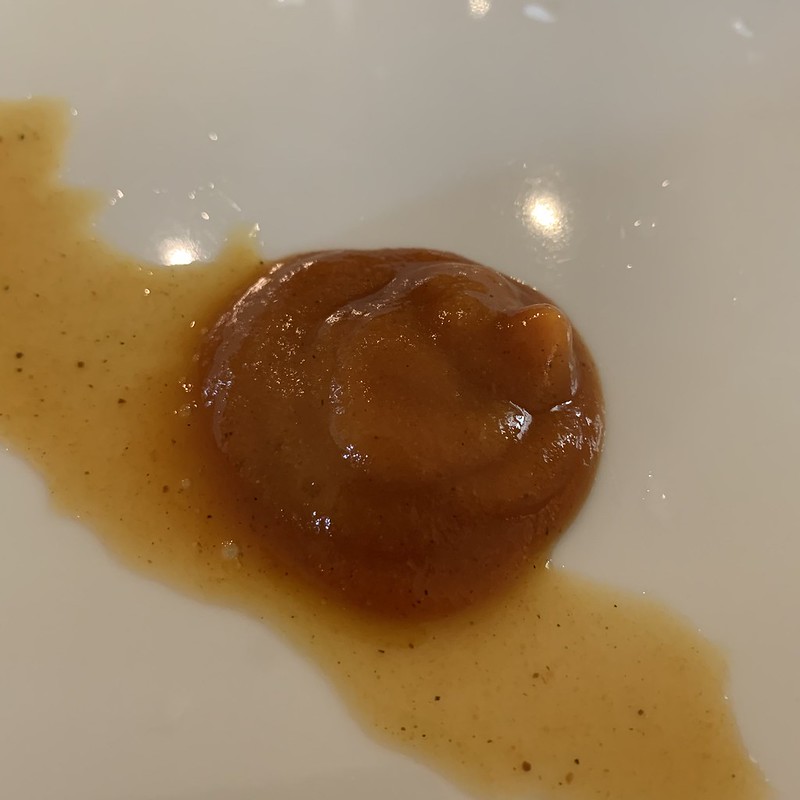 pH pH is a log scale - are we using too much vinegar?
2