Scovie's Bits. (And maybe some cooking)

I saw the stick in Mashers but wasn't paying attention.

You guys are going to make me buy one. I can feel it.

Reading the Q&A on Amazon.

Will this work in zero gravity? I have an astronaut friend who loves eggs.

How will he get the cracked egg in there?

Scoville DeVille said:
Will this work in zero gravity? I have an astronaut friend who loves eggs.

How will he get the cracked egg in there?

SIMPLE!  Before leaving earth, crack the eggs into a ziploc bag, then, when in space, cut the corner of the bag and squeeze the eggs into the Rollie!  (just ignore that whole 'no refrigeration for 2 weeks' detail)

PureEvilProducts
The Chile Addict's prayer-"Lord, grant me the wisdom to know it will be too hot, the courage to eat it anyway, and the serenity to accept the pain that follows. Amen"
PepperPeopleRock!

His name was Bubba, he was from Mississippi ... And he needed a loan, So ... he walked into a bank in New York City and asked for the loan Officer. He told the loan officer that he was going to Paris for an International Redneck Festival for two weeks and needed to borrow $5,000; and that he was not a depositor of the bank.

The bank officer told him that the bank would need some form of security for the loan, so the Redneck handed over the keys to a new Ferrari. The car was parked on the street in front of the bank. The Redneck produced the title and everything checked out. The loan officer agreed to hold the car as collateral for the loan and apologized for having to charge 12% interest.

Later, the bank's president and its officers all enjoyed a good laugh at the Redneck from the South for using a $250,000 Ferrari as collateral for a $5,000 loan. An employee of the bank then drove the Ferrari into the bank's private underground garage and parked it.

Two weeks later, the Redneck returned, repaid the $5,000 and the interest of $23.07. The loan officer said, "Sir, we are very happy to have had your business, and this transaction has worked out very nicely, but we are a little puzzled. While you were away, we checked you out on Dunn & Bradstreet and found that you are a Distinguished Alumni from Ole Miss University, a highly sophisticated investor and Multi-Millionaire with real estate and financial interests all over the world. Your investments include a large number of wind turbines around Sweetwater, Texas.

The good 'ole boy replied, "Where else in New York City can I park my car for two weeks for only $23.07 and expect it to be there when I return?"

Scovie, did you finally get the rollie or what..

The Hot Pepper said:
He got the Scollie knockoff.
Click to expand...

Will it make eggless omlettes. Asking for a friend.

Sent from my SM-G960U1 using Tapatalk

LOL! I am on kitchen gadget restriction. CJ hinted the other day that I can buy a new "tool" when I get rid of one first.

I am currently trying to figure out a loophole.

So far all I've got is, "we have exactly zero cooking devices in the truck".

I don't have the balls to present that one yet. :Rofl:

saiias said:
Will it make eggless omlettes. Asking for a friend.

Sent from my SM-G960U1 using Tapatalk
Click to expand...

I tried beating an egg and added some cheese and the sausage.

Beaten eggs with the air whipped it caused it to grow faster and longer than the cooker needed to cook the top 1 inch.

I have some egg beaters to try this morning.

Going to try a few Tablespoons of the mix and the sausage.

I tried the pizza rollie...taste is good but I find it more of a hassle than a convenience. Also it takes about 8 mins.
4 mins...then dump it out and invert it to crisp up uniformly.


Scovie.....I've got your loophole covered.

It popped up but I left it in another couple mins for 8 min total.

30 secs later the end popped out.

Tried it 4 times with the Reddieggs and results are lame. Undercooked to raw and taste isn't up to par vs using a whole egg. 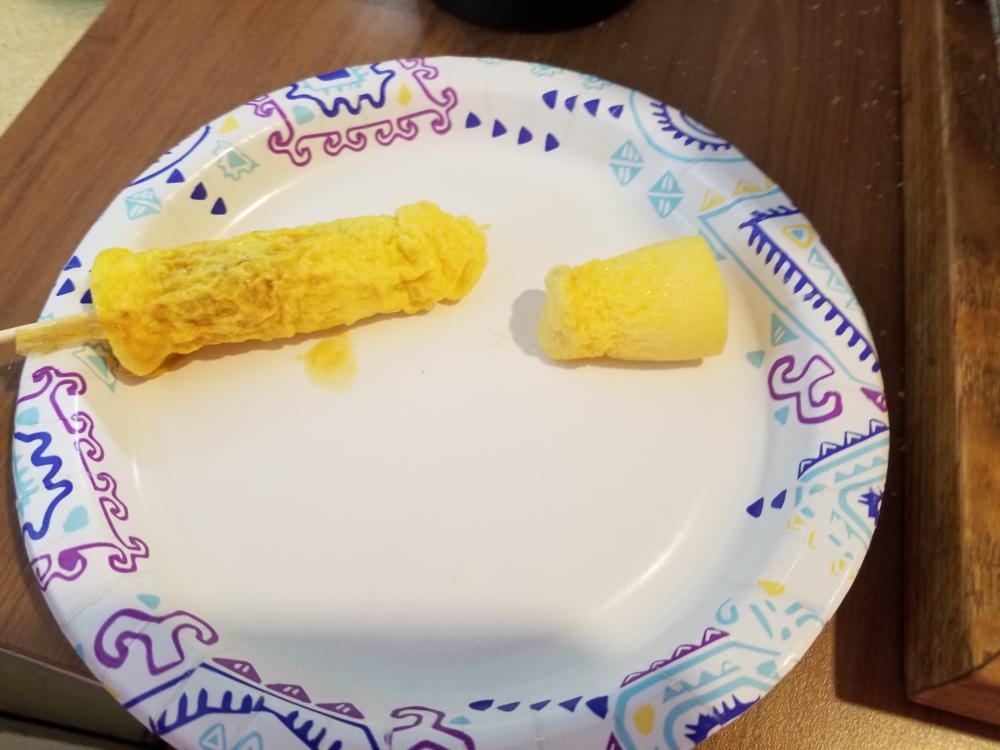 OMG I am LOLing! or is it LingOL?

Something just doesn't look quite right with that.

The Hot Pepper said:
Let me guess, you made two but can only find one. Look under the wife's pillow.
Click to expand...