So a couple years back when I was working on a commercial grow for a greenhouse I spotted this guy when I was sorting through a few dozen of our Jalapenos in 512 cell trays.  It wasn't likely to be a cross, as the seeds came from isolated seed stock from a company that only sells to nurseries. None of the other plants we had ended up looking like this. I was keeping a close eye on them.  We didn't offer any variegated peppers there at the time, so I had a hunch it was something special.  I took it home with me and tossed it in a SOLO cup. 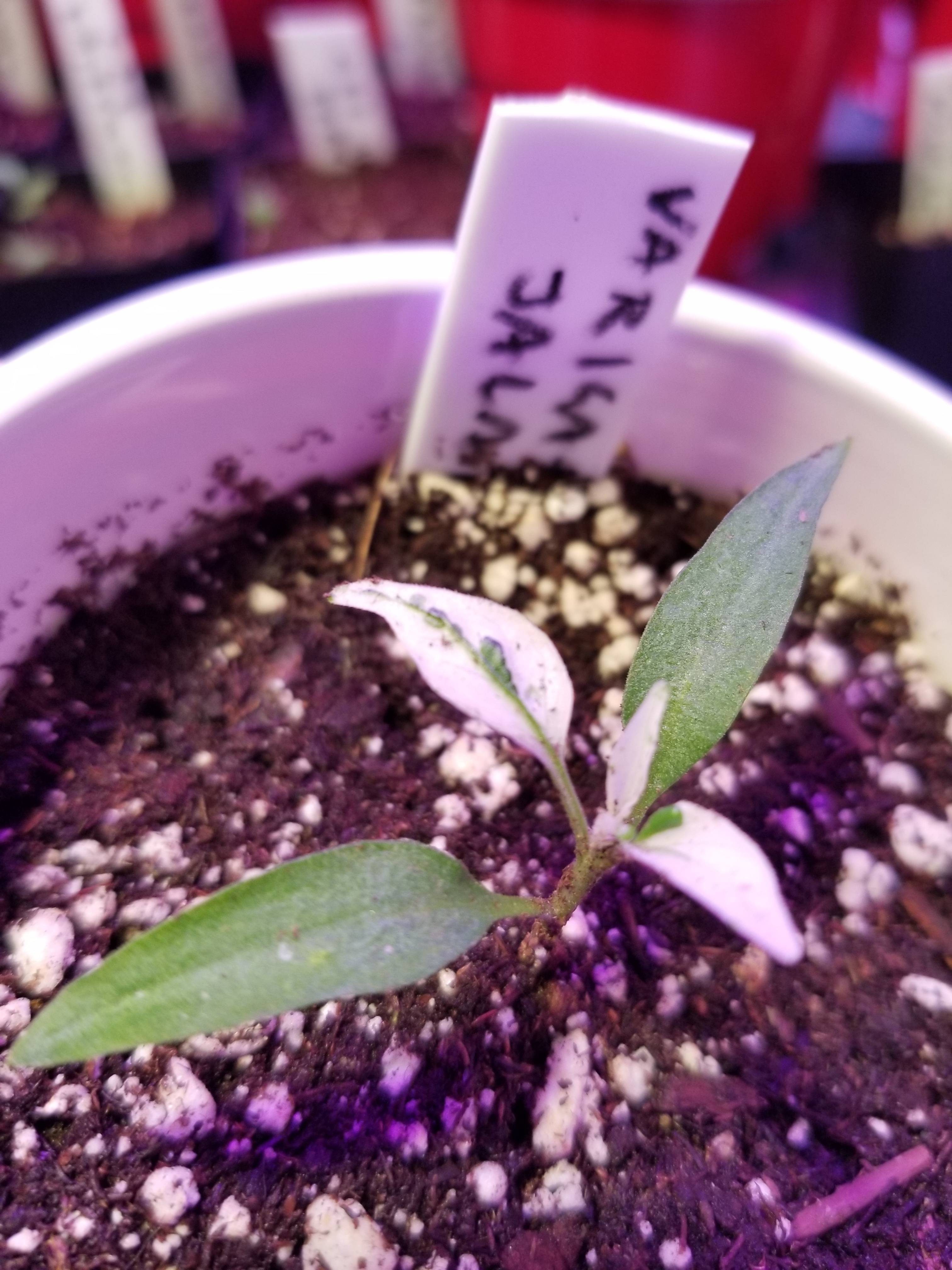 Where I found him: 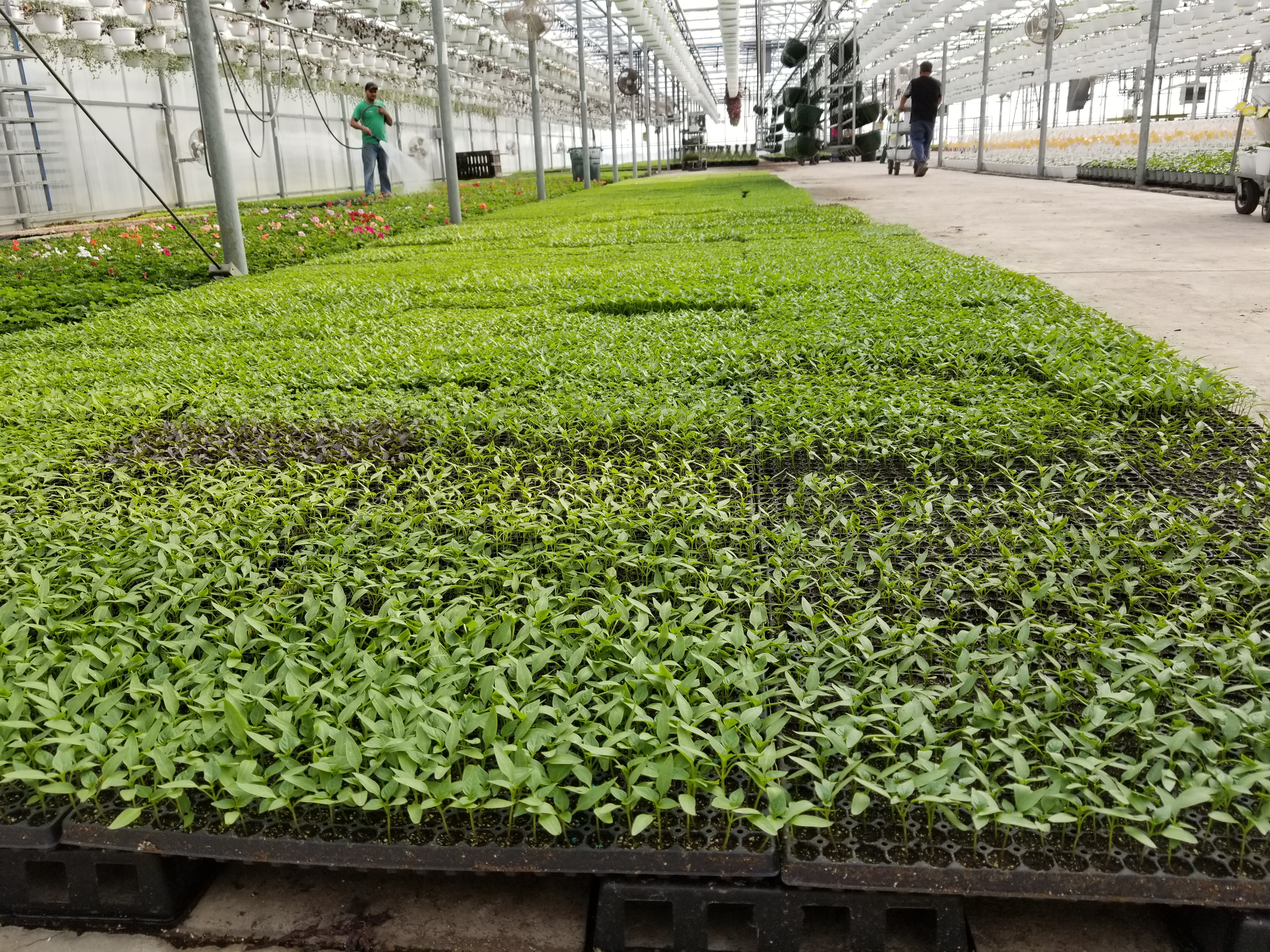 A bit later on that season I snapped a few more pics of the plant. 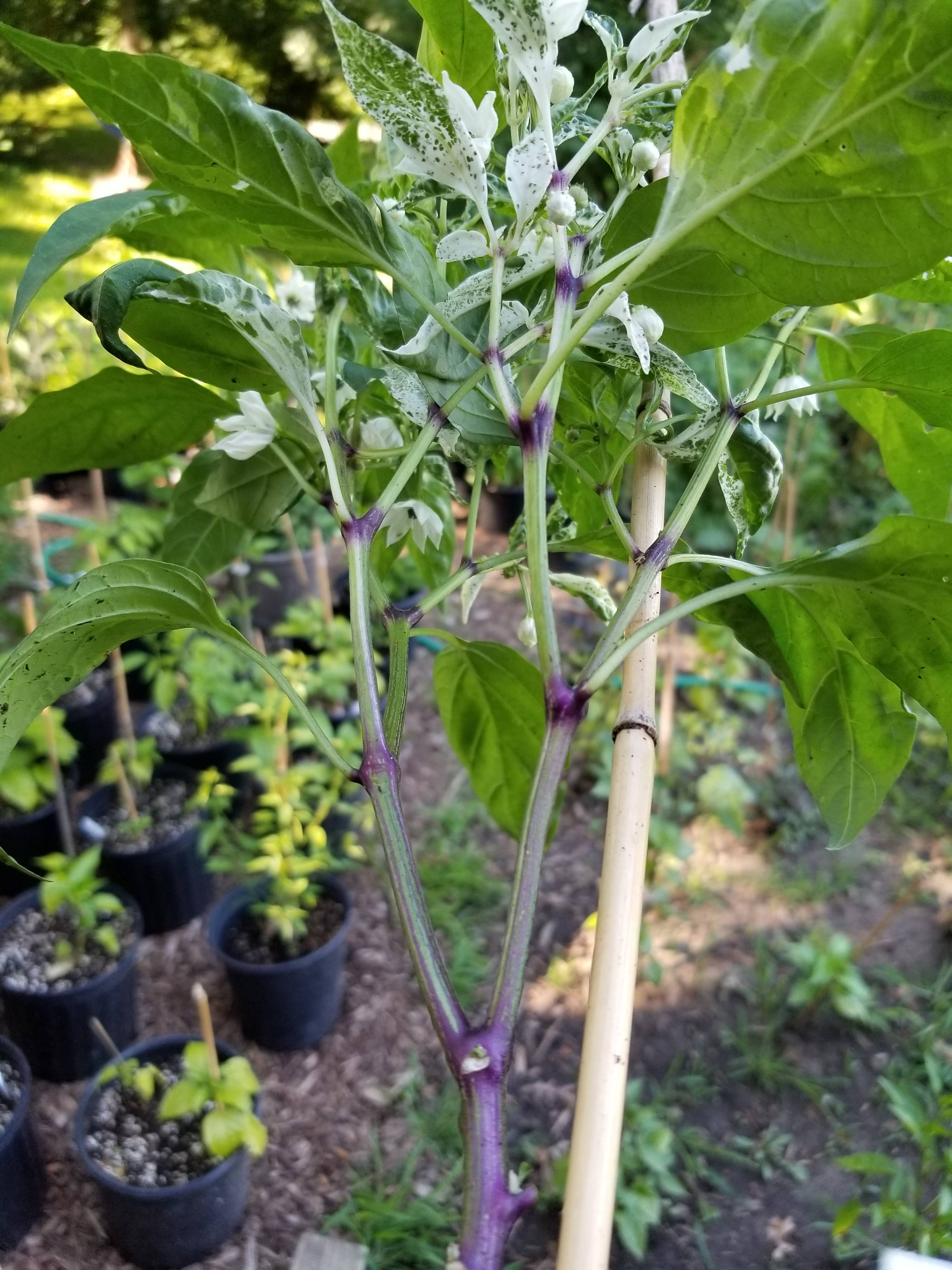 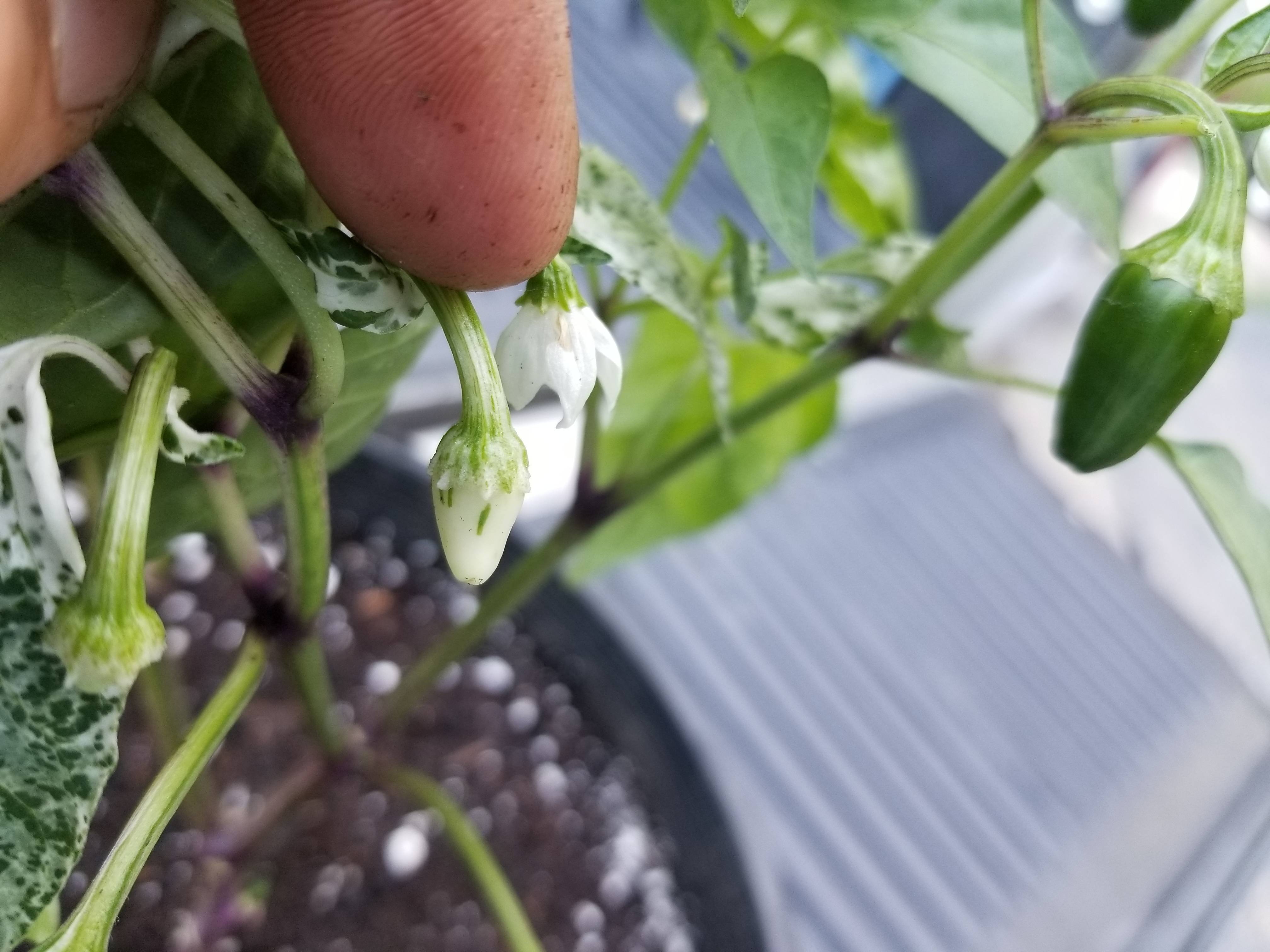 I waited for the pods to ripen and saved seeds, hoping for good things.   They took a long time to ripen and were quite corked.  Unfortunate that I didn't think to take better photos at the time: 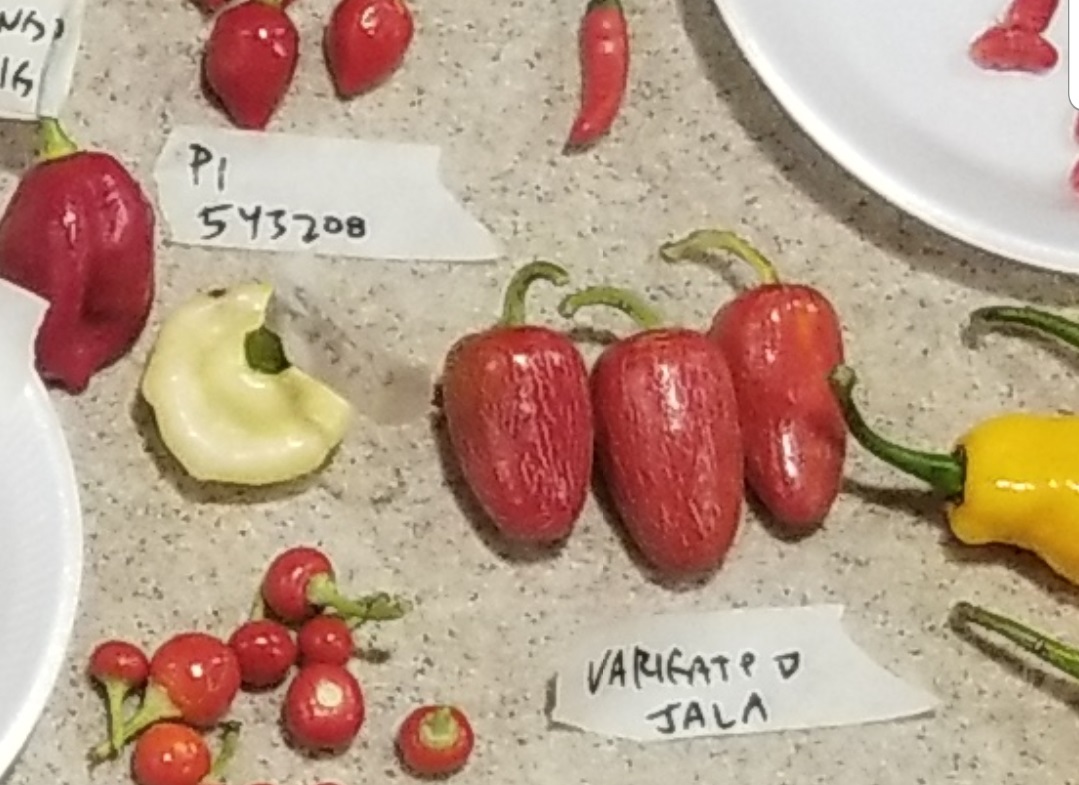 Shortly afterwards I started some of those seeds and these guys turned up: 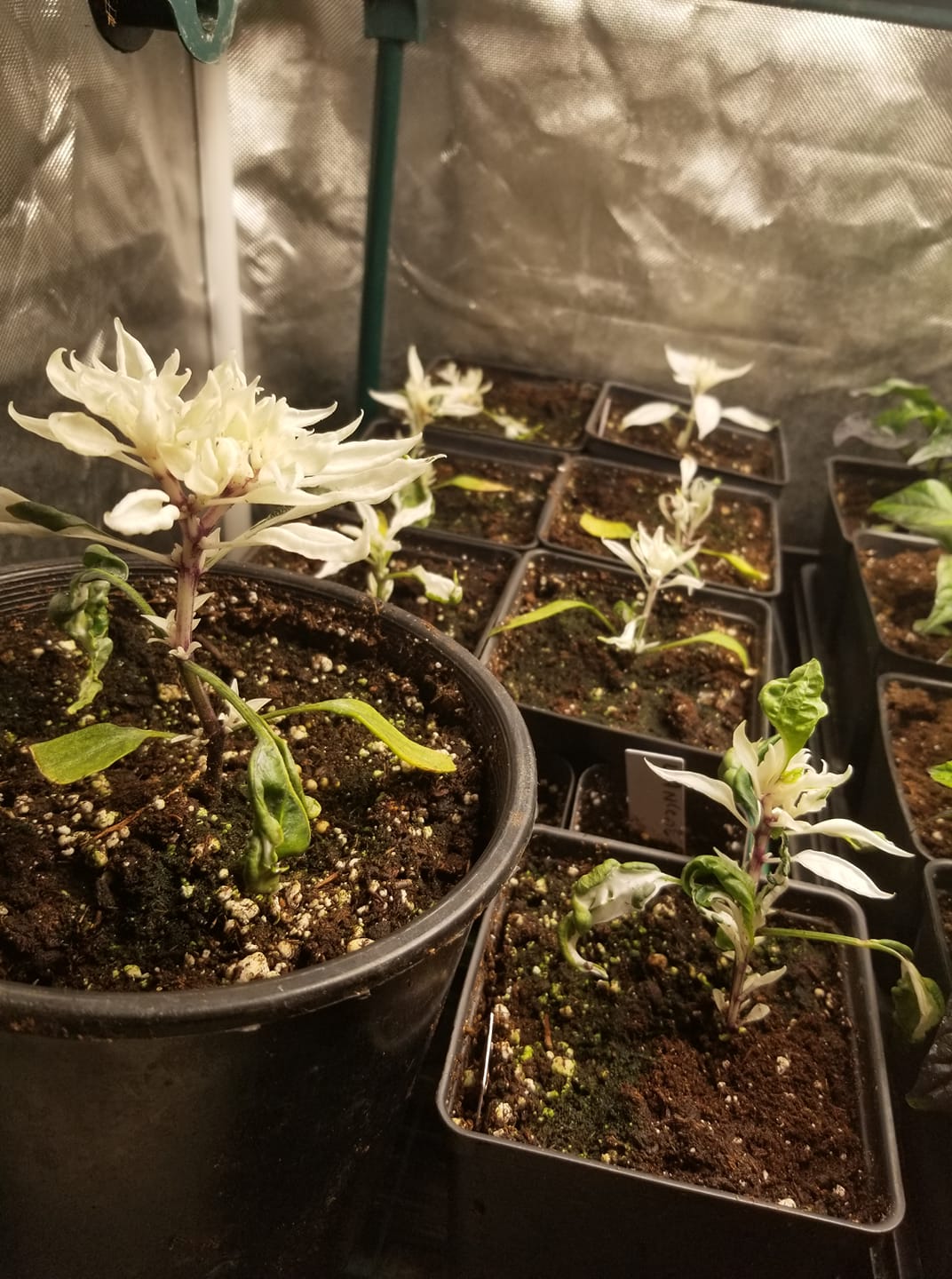 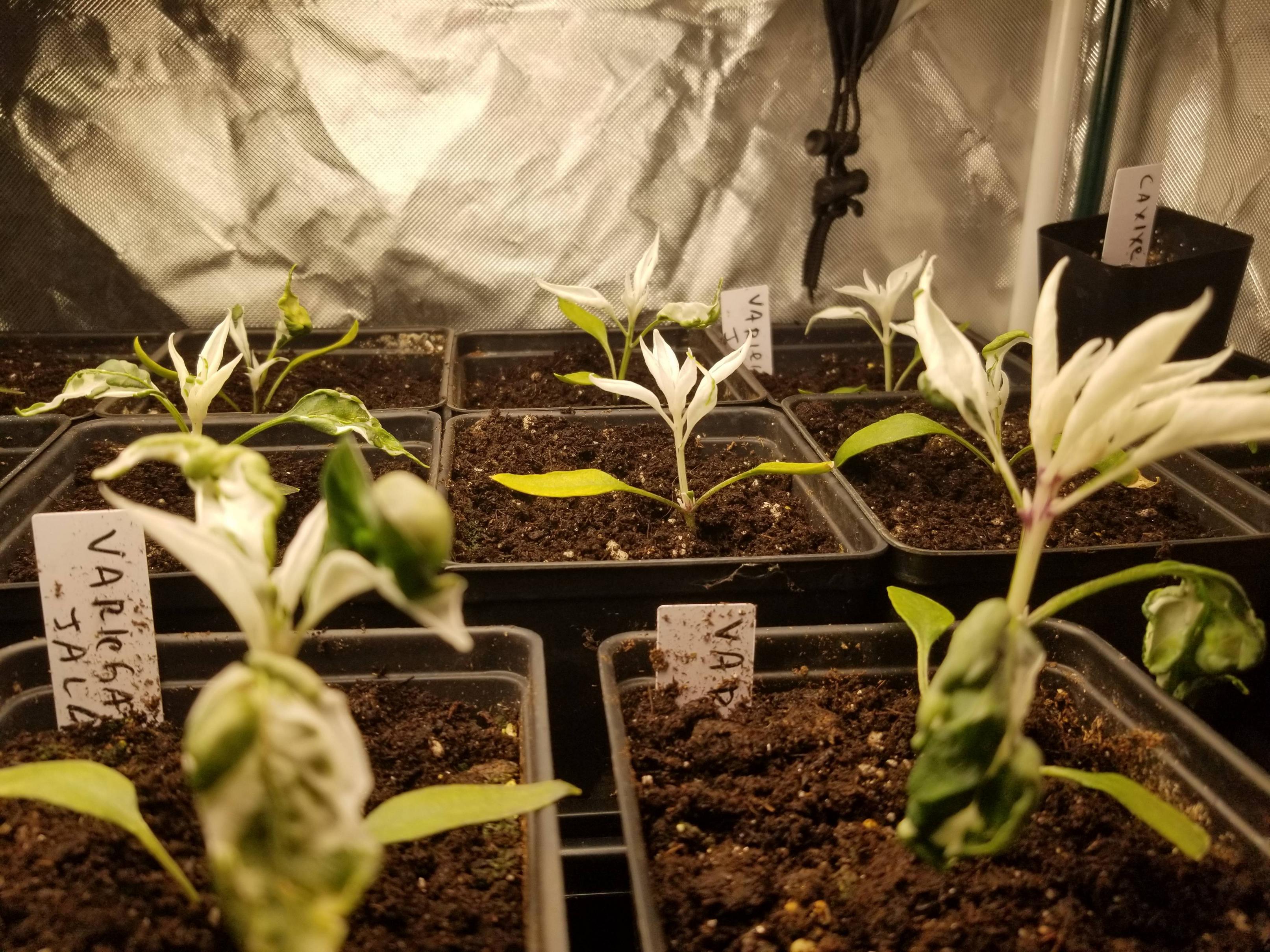 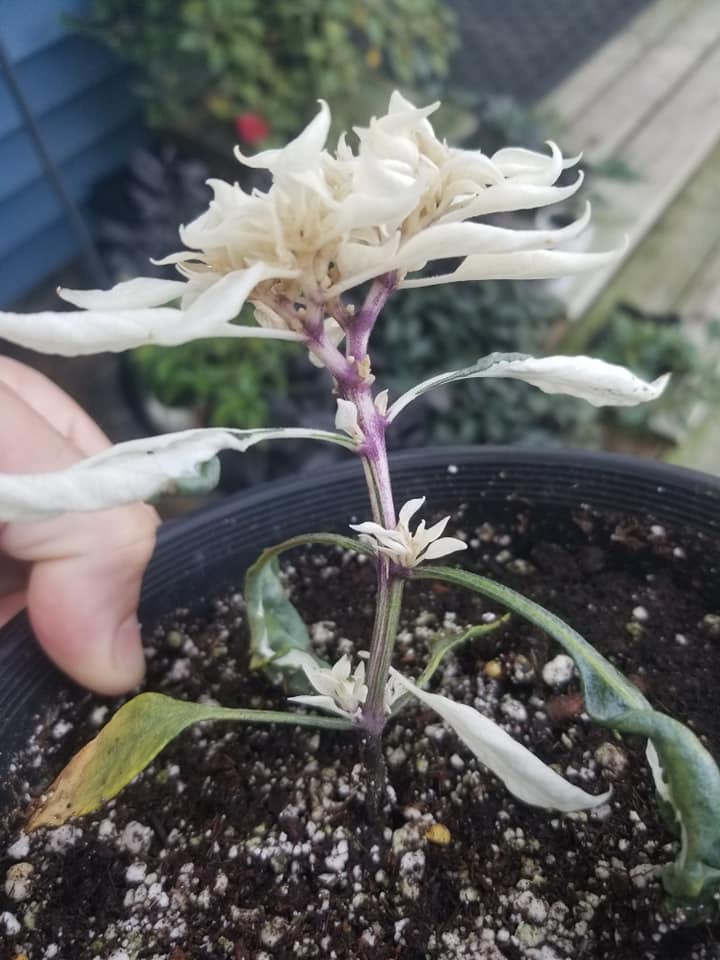 This is about as far as I managed with them, as I moved three hours away and started a new job.  Many of my plants were severely neglected for a span of a few months and all but one of them kicked the bucket.  I'm happy that I sent out seeds for these to several folks (who did have success with them!) and I am starting to grow some more thanks to Paul G and Chris Phillips. 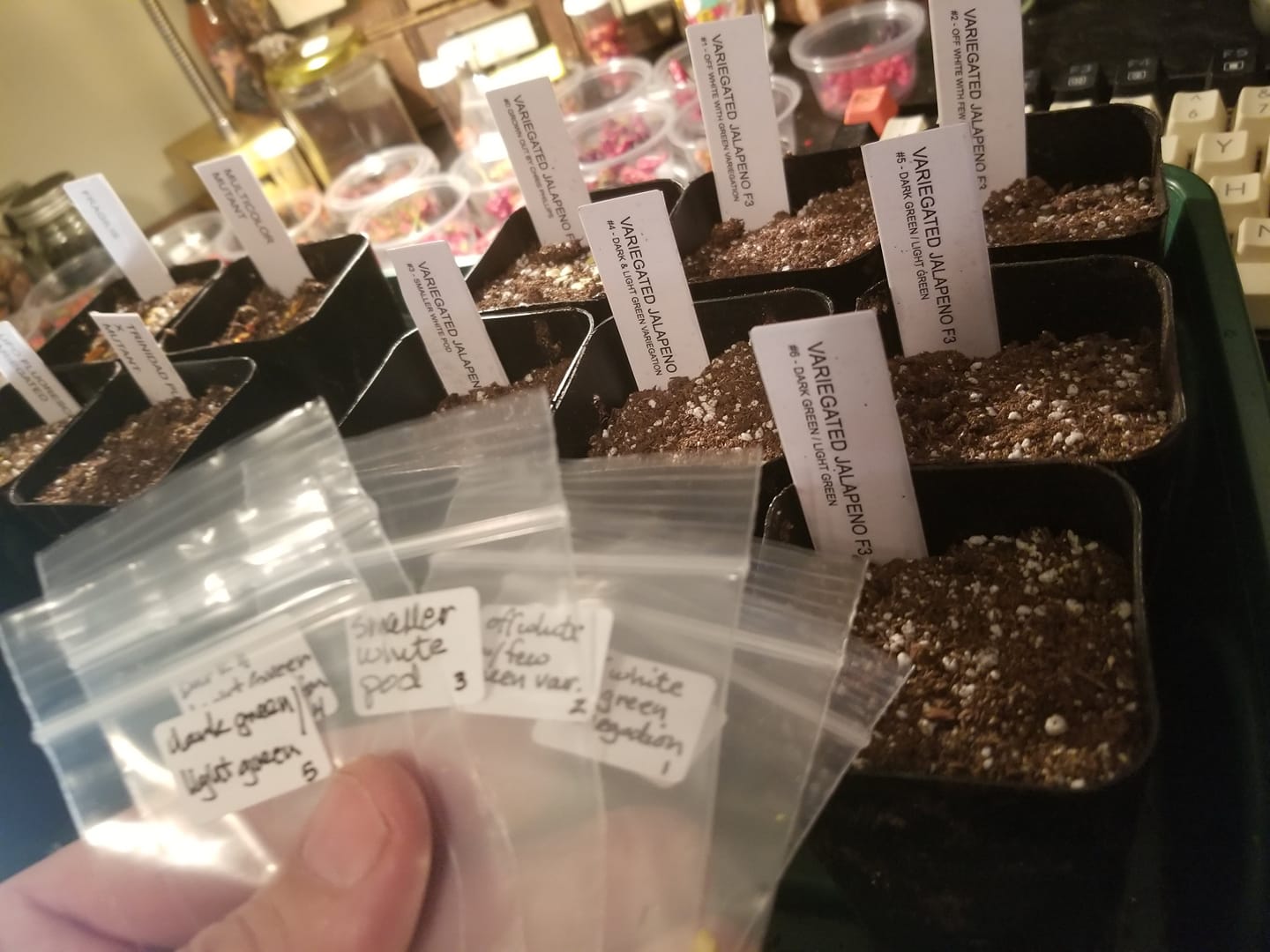 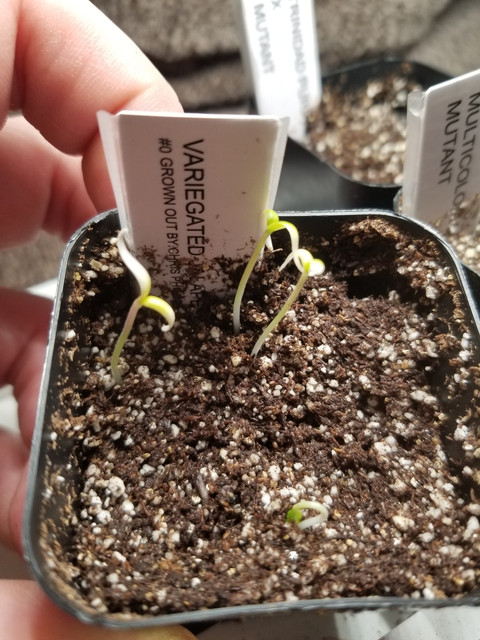 That's where I am right now!  Hopefully Canedog, Paul and Chris will chime in with their experience growing them.

Those are definitely some unique plants. I'm surprised some of those did as well as they did given the amount of white tissue.

I'm excited to see what all those different phenotypes look like once they mature!

Extreme Member
Great to see a glog dedicated to these, CTB.  They're really cool plants and I appreciate you sharing seeds with me.  You must have some eagle eyes to spot one little variegated jalapeno in that sea of sprouts.

I have have a couple of these guys growing indoors now that I've cleaned up, pruned, and re-potted since the season.  Hopefully the comfy conditions will get them growing again quickly.  I had one of the plants from your seeds grow out all green, and it definitely outpaced and out produced the others last season.  Still, the white ones seem to grow OK even at times they have so little green it seems like they shouldn't be able too.

Here's a pic of some freckled foliage.  The other one's mostly a stick right now, but it's on the rebound. 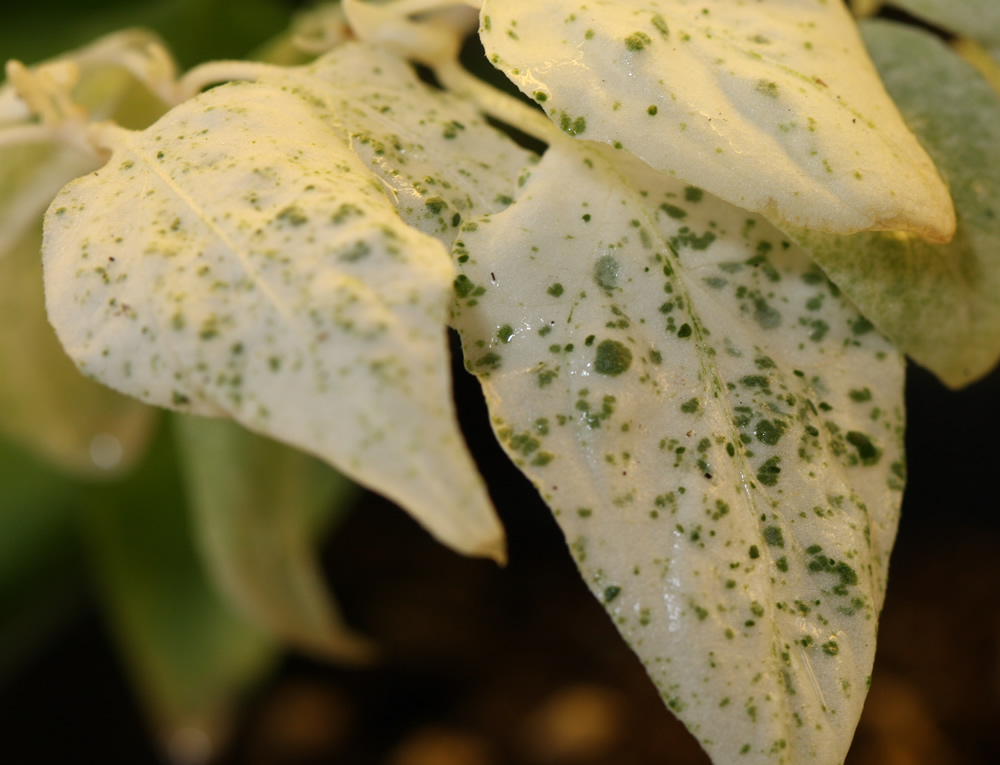 This is so neat to see what looks like a random mutation that’s able to grow to fruit.

If anyone has some seeds so spare, I’d definitely like to try growing it in Canada.

Extreme Member
Good on ya for starting this thread, Matt!

I will definitely post some pics from this season,
and anything that happens with my VJ grow. I plan
on growing out several next season.

I'd be happy to send a few your way. Only requirement
is that you post your progress with the Variegated Jalapeño
on this thread.  Matt and I have been tossing this around
for awhile and agree that everyone growing it should post
results here and be willing to share seeds back and forth
as interesting things happen. I think I speak for Matt.
Every Pod a Victory! Life Force is Strong! \O__
Links to all my grow logs here.

PaulG said:
Good on ya for starting this thread, Matt!


I'd be happy to send a few your way. Only requirement
is that you post your progress with the Variegated Jalapeño
on this thread.
Click to expand...

Absolutely! I have a small naturally lit greenhouse space, so I should be able to start them pretty early to potentially get seeds for a second generation this summer.

Happy to keep passing the seeds on.

Acprkit said:
Absolutely! I have a small naturally lit greenhouse space, so I should be able to start them pretty early to potentially get seeds for a second generation this summer.

Happy to keep passing the seeds on.


Sent from my iPhone using Tapatalk
Click to expand...

Okay, Patrick. PM me your address, and I will get
some in the mail soon. I'll include a couple of types
color-wise.

The plant I grew came from the original seeds that
Matt got from the first generation plant. So, my seeds
are F2, producing the 3rd generation when you grow
them out.

Can't wait to see pics of your greenhouse space!
Every Pod a Victory! Life Force is Strong! \O__
Links to all my grow logs here.

Edaxflamma said:
I'm excited to see what all those different phenotypes look like once they mature!
Click to expand...

One thing I noticed on my one plant that I see
reflected in Matt's pics above is the bushy growth.
Lots of nodes and branches really close together.
Every Pod a Victory! Life Force is Strong! \O__
Links to all my grow logs here.

PaulG said:
One thing I noticed on my one plant that I see
reflected in Matt's pics above is the bushy growth.
Lots of nodes and branches really close together.
Click to expand...

Yep.  My all-green F2 grew like a normal jalapeno, but the ones with white grew as you say.
Current Grow Log - CaneDog 2022 Glog

What was the white/green split in your F2 seedlings?

My greenhouse space is in a community greenhouse, currently it’s filled with some cut down habs and bells to overwinter, plus an interesting geranium (lemon sculpture). Peppers are doing surprisingly well, with the chopped down bell already fruiting again. 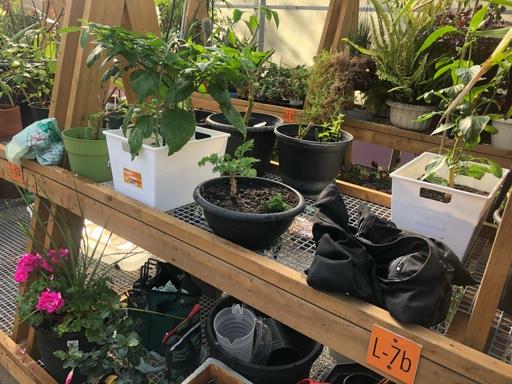 This variegated jalapeno was a really cool plant I grew last season.  I was surprised the flavor of the pods was on point, which usually isn't the case with stuff like this.  I did find variation among the plants and sometimes the variegation lessened as the plant matured, but the fruits retain the look.  Also, the plants that had the highest concentration of albino leaves were the hardest to keep alive.  I tried as hard as possible with one of the whitest plants, but at the end, it lacked the vigor to flower and set fruit.   All in all, it was really fun growing them!  I'm excited to see how the next generation goes and glad I could get you seed back Matt.

Sent from my iPhone using Tapatalk
Click to expand...

That is really great, Patrick. How cool to have a
community greenhouse. Is there a rental charge?
It looks like a first class set-up. Any chance of
seeing a pic of the larger structure? Is it heated?
How about access to power?

Sorry to pester you with questions, but it's such
a great idea.
Every Pod a Victory! Life Force is Strong! \O__
Links to all my grow logs here.

Rental is ~$200 for the season. It’s currently closed due to COVID lockdown, but plants are allegedly being taken care of. It will be interesting to see what I come back to when it reopens (hopefully soon!)

You can see the exterior if you search for Riverlea Greenhouse Toronto. It’s a large poly tunnel structure. Each bench is an A frame with two tiers and a water spigot. No electricity to the bench.

Extreme Member
Thought I’d post a few pics of the Variegated Jalapeño
from this season.


One of the earliest images of the variegated foliage on
the otherwise green-leaved plant: 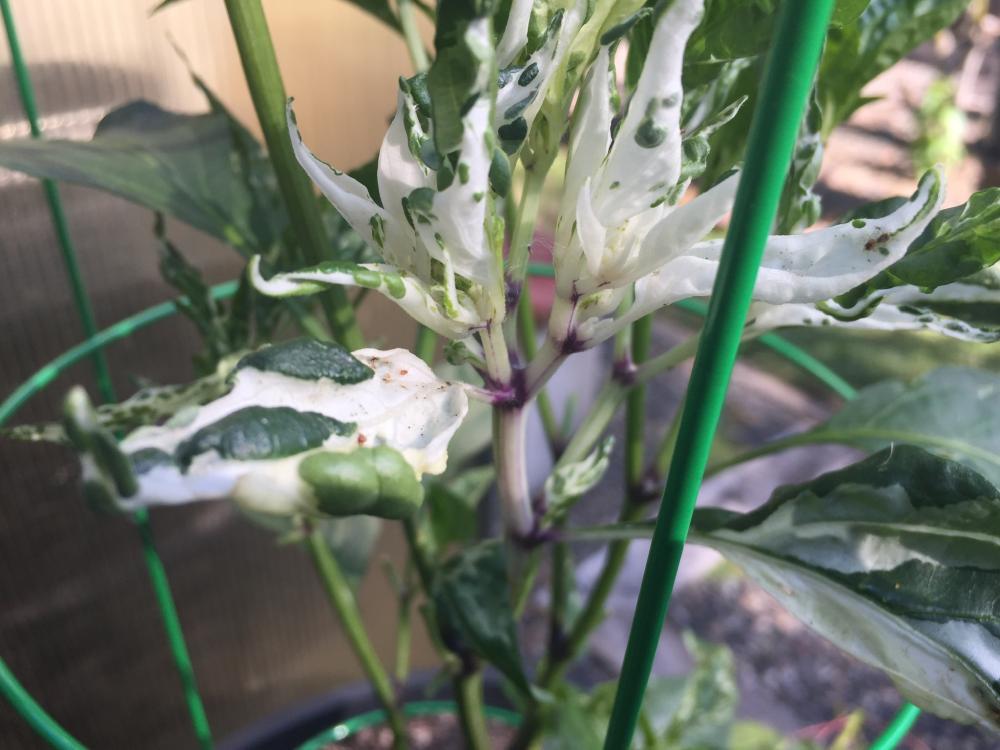 The purple nodes and white stem made a striking contrast.

One of the earliest pods: 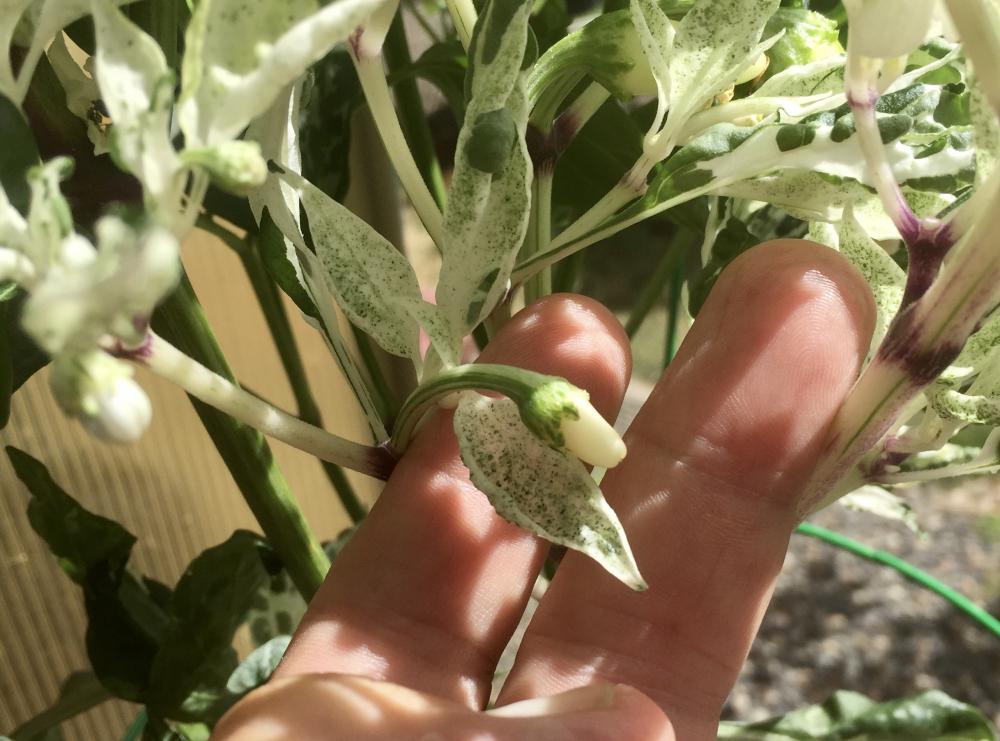 This pod was well over 99% white. Just one green dot.
Every Pod a Victory! Life Force is Strong! \O__
Links to all my grow logs here.

Extreme Member
The majority of the foliage was green. 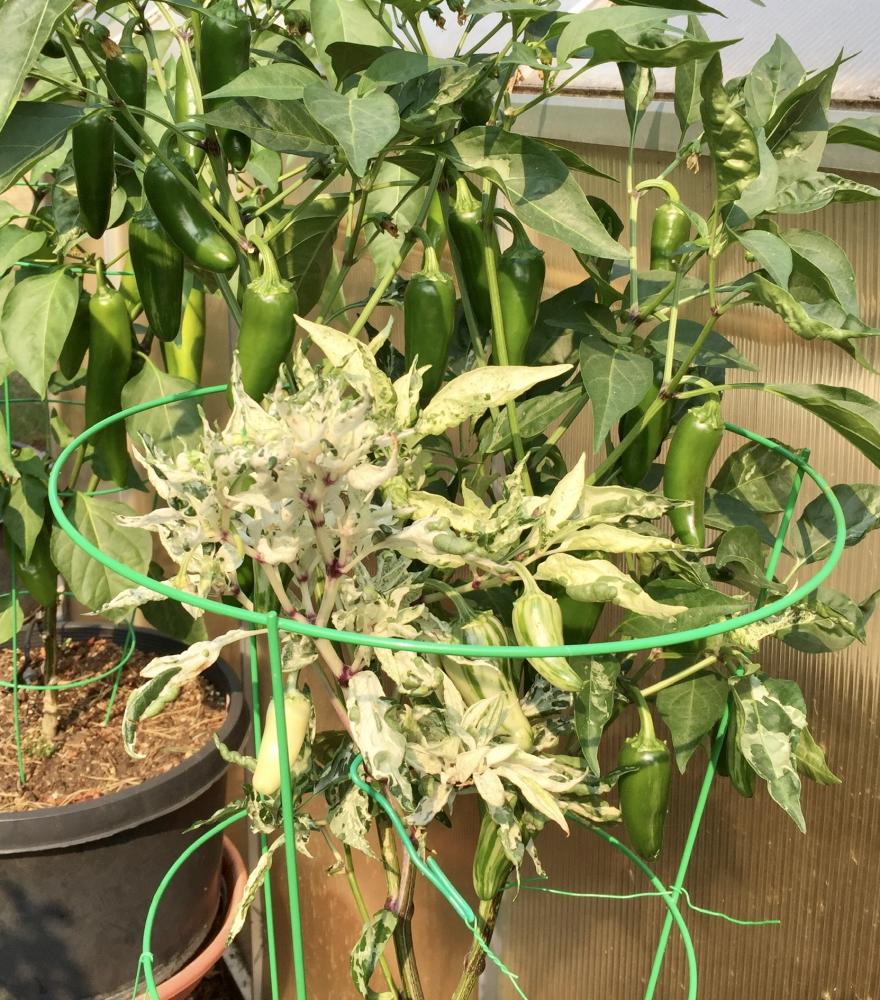 You can see the green pods are bigger than the
variegated ones, just the right size for poppers!

Some of the variegated pods starting to color up: 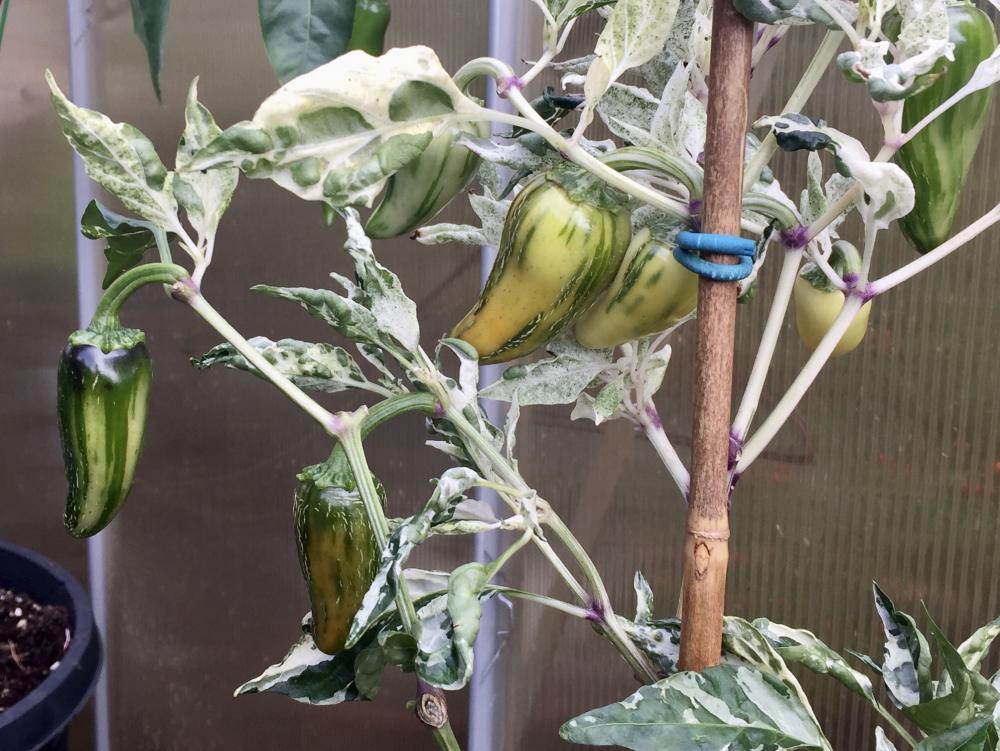 Extreme Member
I cut back all the green foliage toward the end
of the season to help the  variegated pods ripen
more quickly: 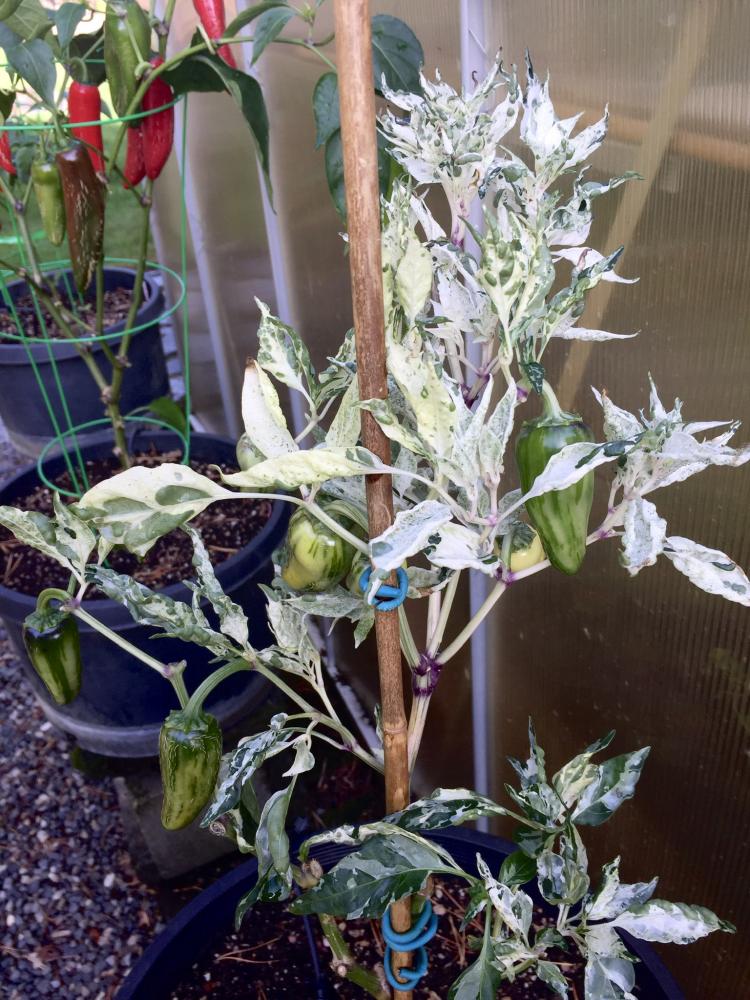 Extreme Member
Cold weather necessitated putting the plant
into a smaller pot to go into the greenhouse: 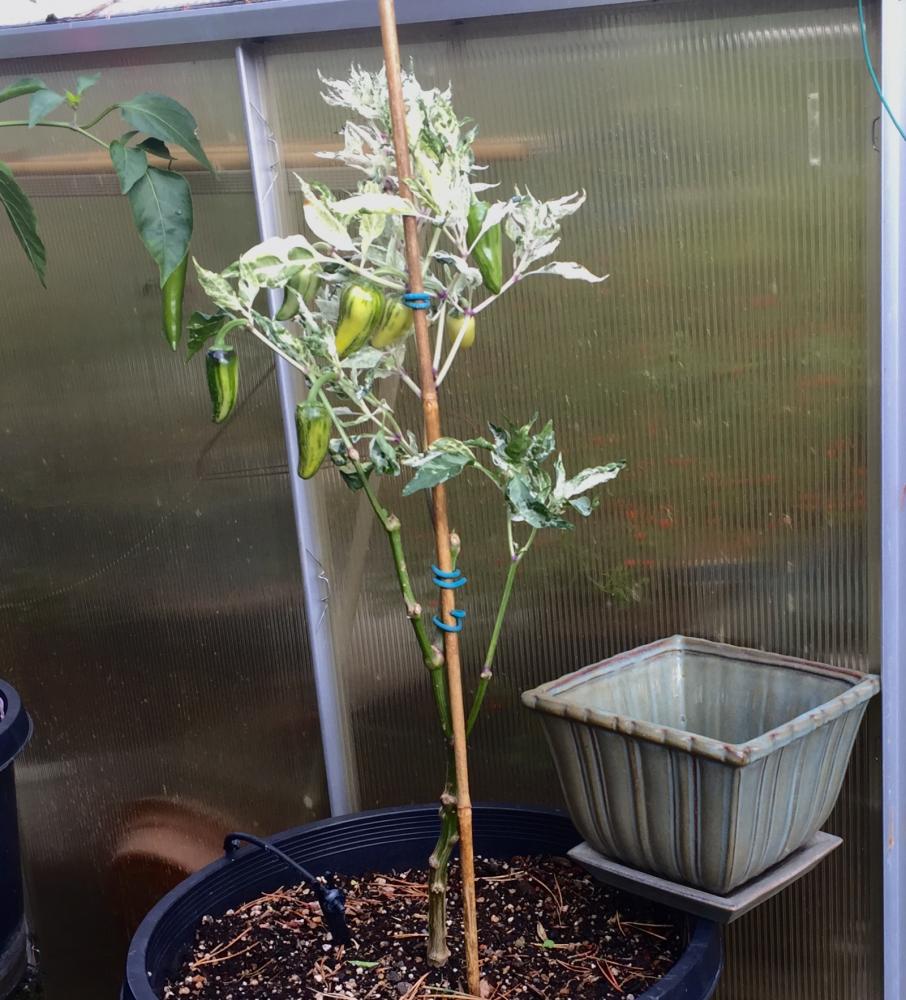 The plant suffered from the transplant and
the pods softened up, but continued ripening: 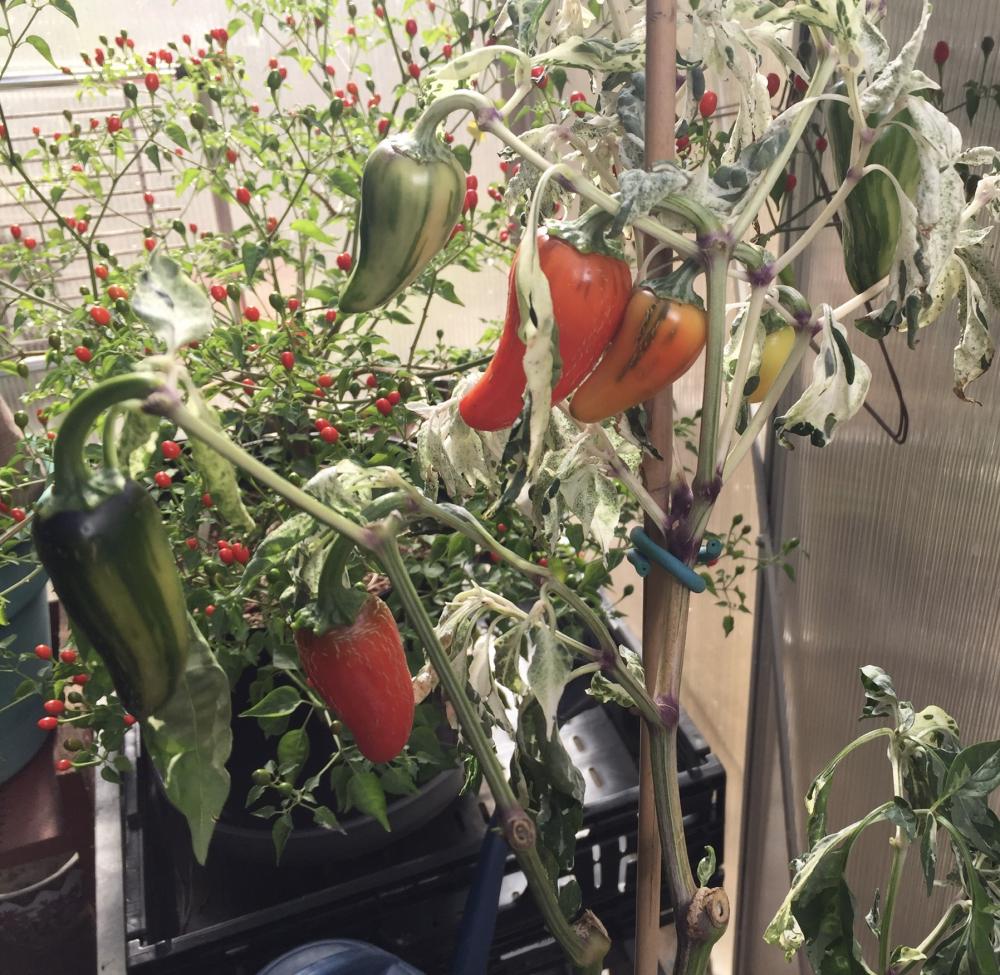 Extreme Member
Sample of the pods and seeds. The pods never
got red, but the seeds look good. I am really
hoping they are viable. Unfortunately, I won’t
know until sometime in March: the plant was brought in to try and overwinter.
Since this picture, the foliage has slowly withered
away, and new growth has emerged. Hopefully
it will take and be able to grow out for next season.

Maybe Matt will let us know if the seeds I sent him are
viable. I see that some of Chris’s  seed had sprouted in
one of his earlier posts.
Every Pod a Victory! Life Force is Strong! \O__
Links to all my grow logs here.

Just received my seeds! Four of each are currently soaking for a couple hours and will then be put in starter trays.

I didn’t realize that the pods also showed the variegation - excited to see what emerges.


Sent from my iPhone using Tapatalk
You must log in or register to reply here.

Tinks' Will they won't they? glog