I'd like to dedicate this appetizer recipe to a good Argentine friend of mine, Ruben whose recovering from a 5-way heart by-pass. He spent a good part of his life traveling with his band (drummer) from one country to the next. ........ here's my take on the dish probably similar to one that's made from a South American region 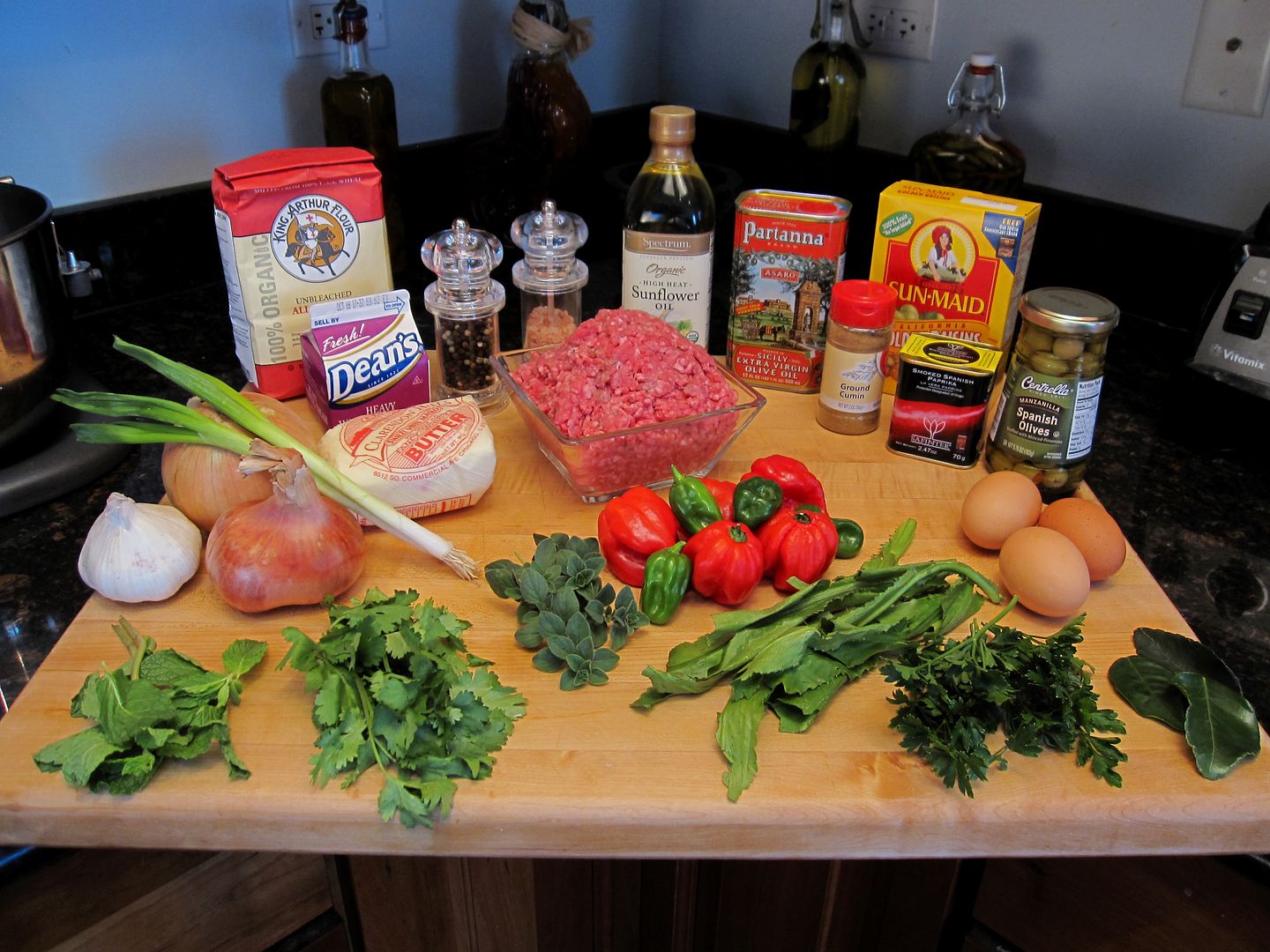 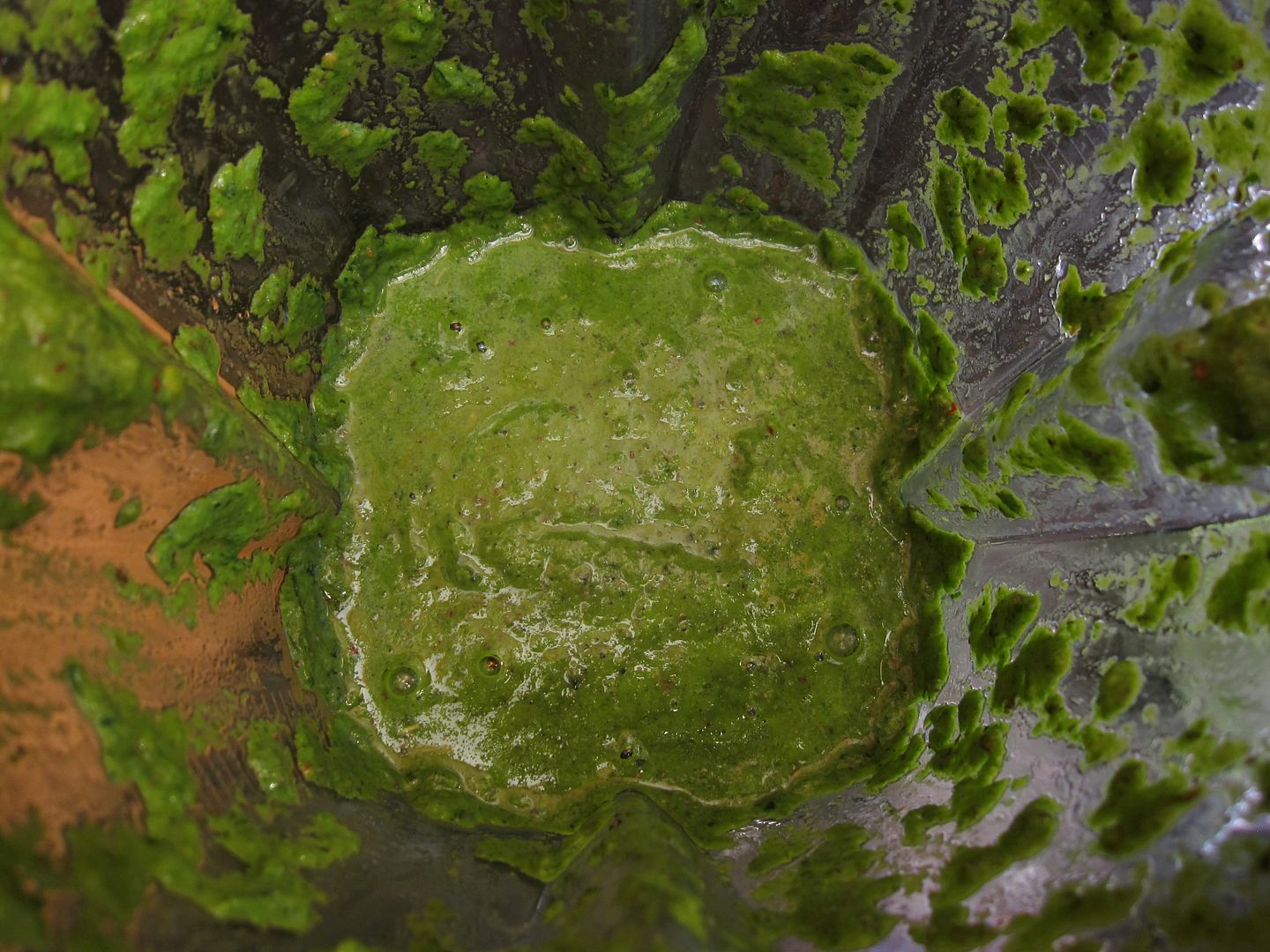 Blend the 1/2 cup of each Mint, Cilantro, Oregano, Italian Parsley, Culantro,  ,...Lime Leaves (3), Scallions (green parts only)  4 chopped green Aji Peppers along with 2 tbls of water. While blender is running drizzle in Olive Oil to a loose but blended sauce forms. Add Salt and Pepper to taste. Set aside. ...Meanwhile, hard boil eggs...when cooled down, peel and chop. Set aside. 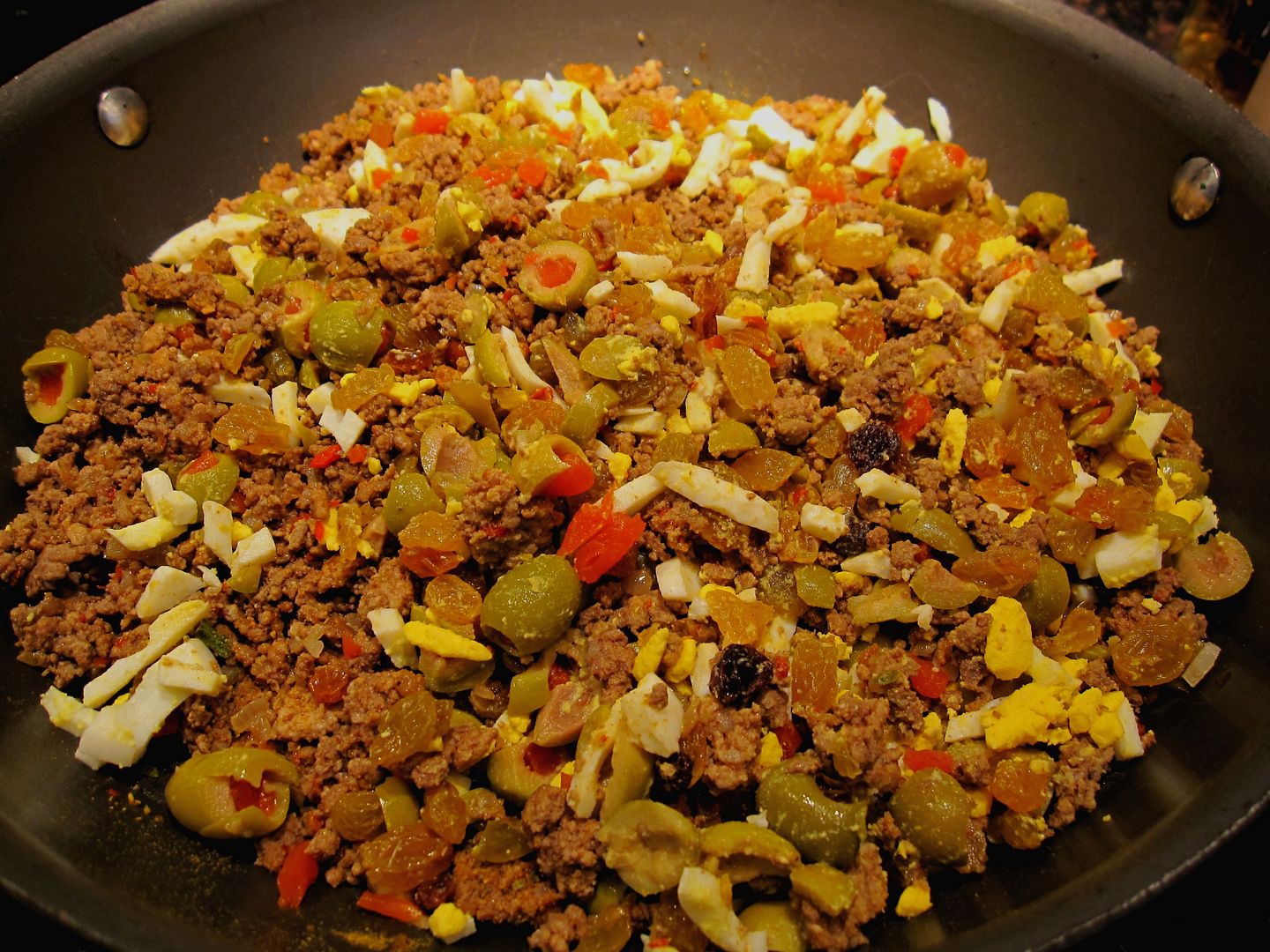 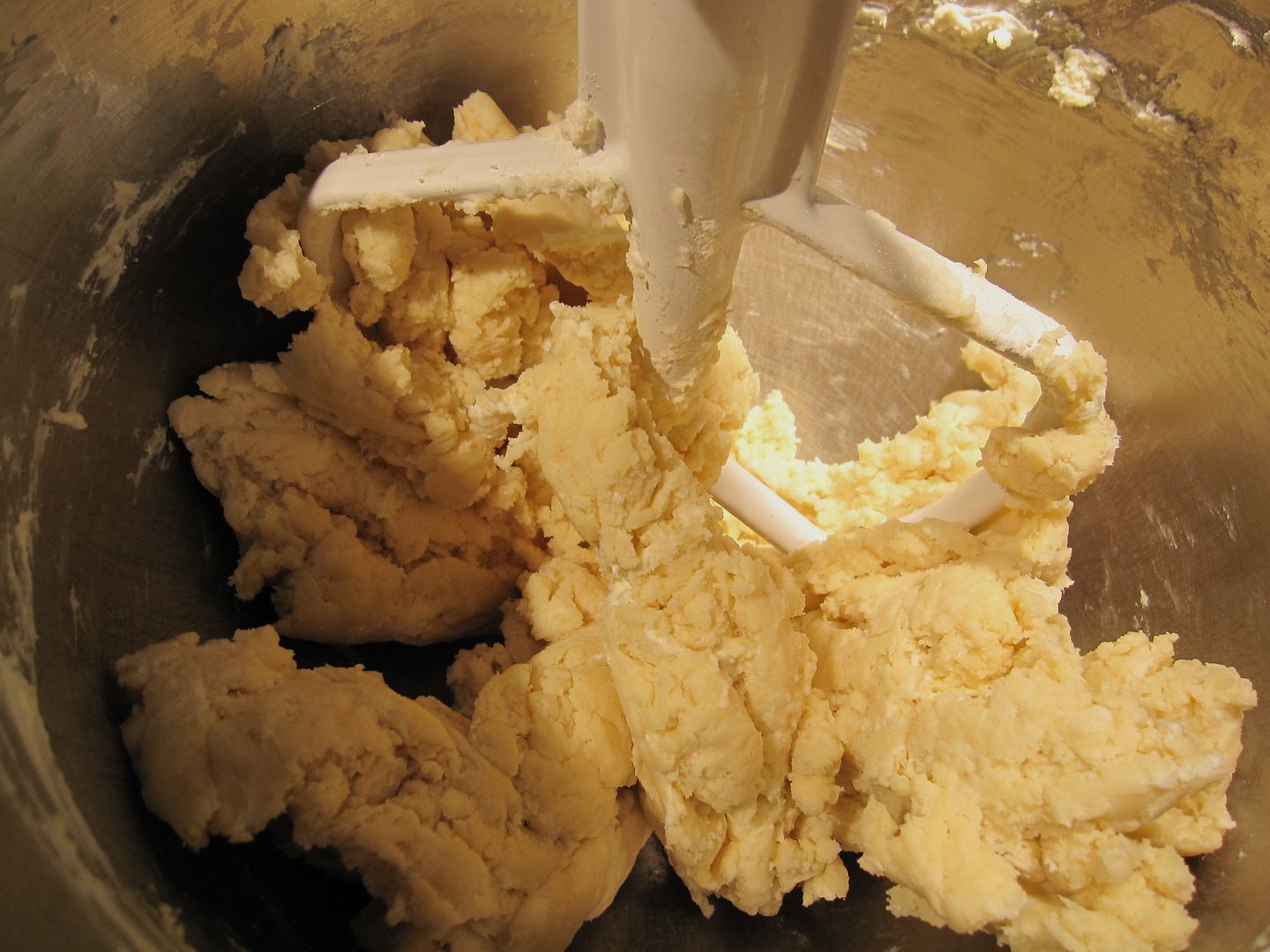 In a mixer cream 1 stick of unsalted Butter and 8oz Cream Cheese. Fold in and gradually mix 1.5 c Flour, 1 tsp Baking Soda, 1 tbl Sugar,  Remove dough when clumped together. Knead to combine and flatten into disc. 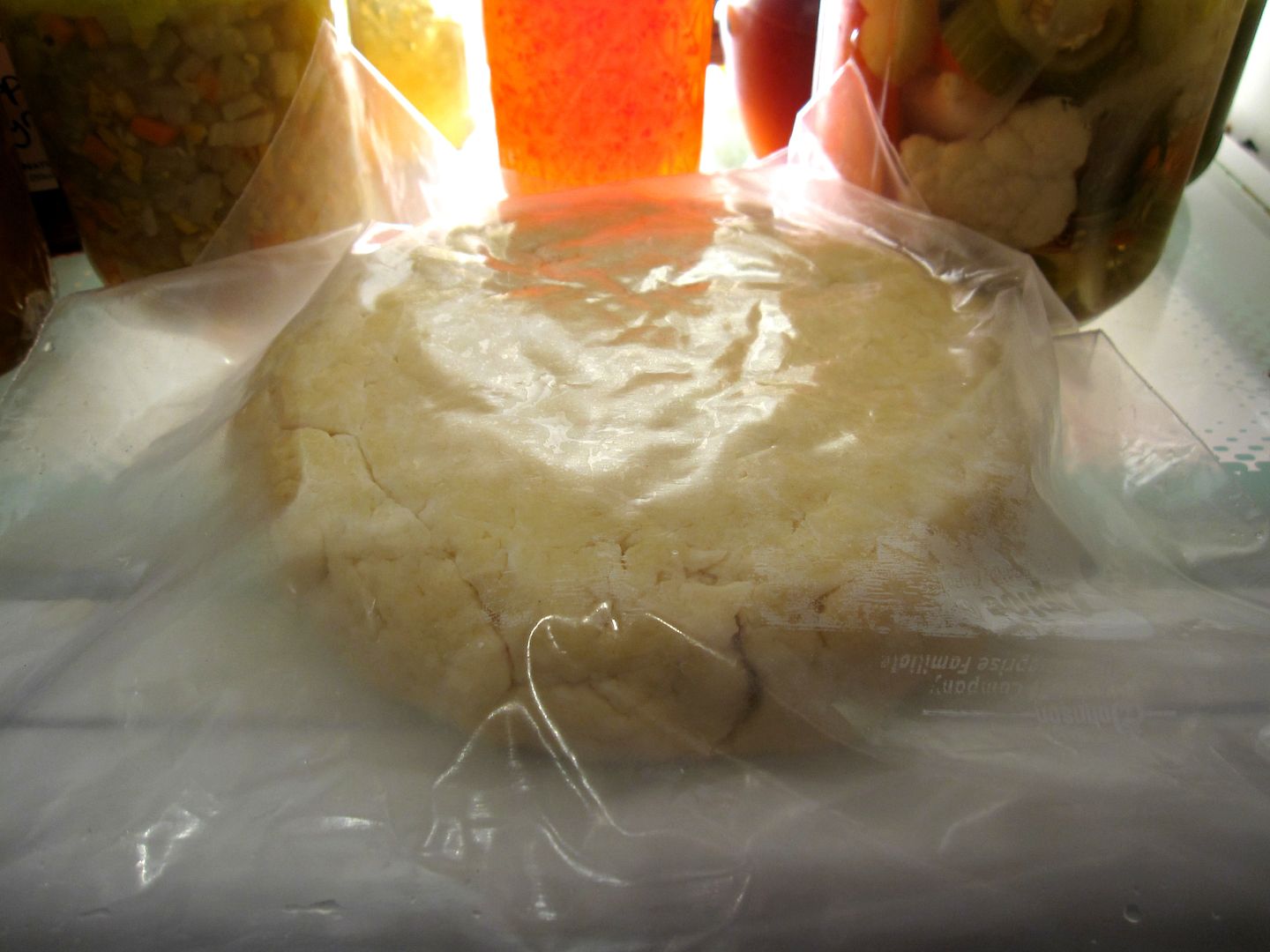 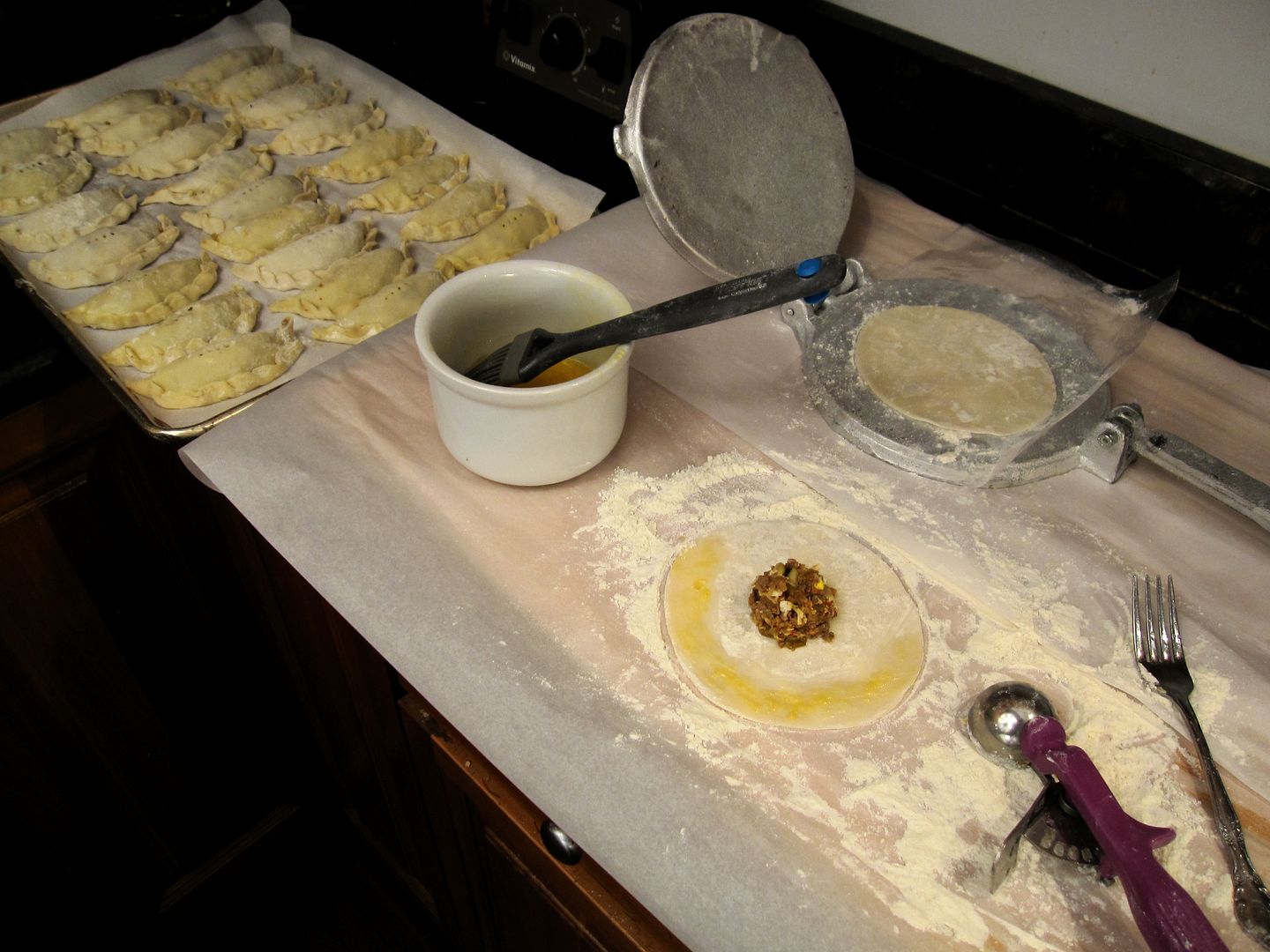 The dough was removed from the fridge and rolled out to about 1/8" thick piece. I used a 4" cutting disc, then placed each piece in a tortilla press to get a thin uniform piece. A smell scoop was used for the filling and a brush of a beaten Egg was brushed on half the dough. Fold dough over and pinch/fold the edges. Fire up oven to 350. Brush tops of Empanadas with a mix of beated Egg and Cream. 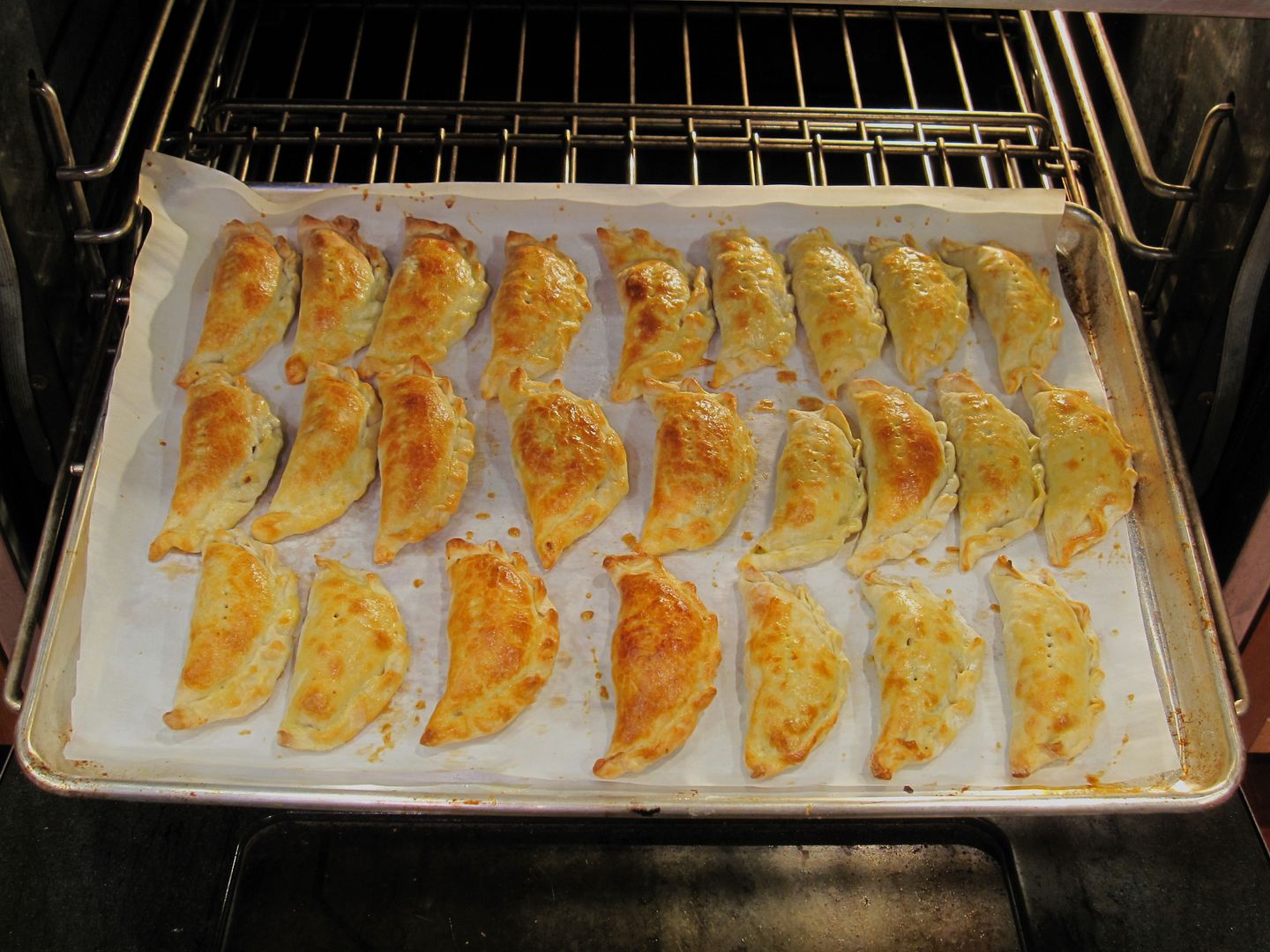 Bake for 12 to 15 min.   ...(I should have used a regular size sheet pan)....over sized pans have there purpose, but even with a convection running its difficult to get an even bake with the lack of overall air circ. 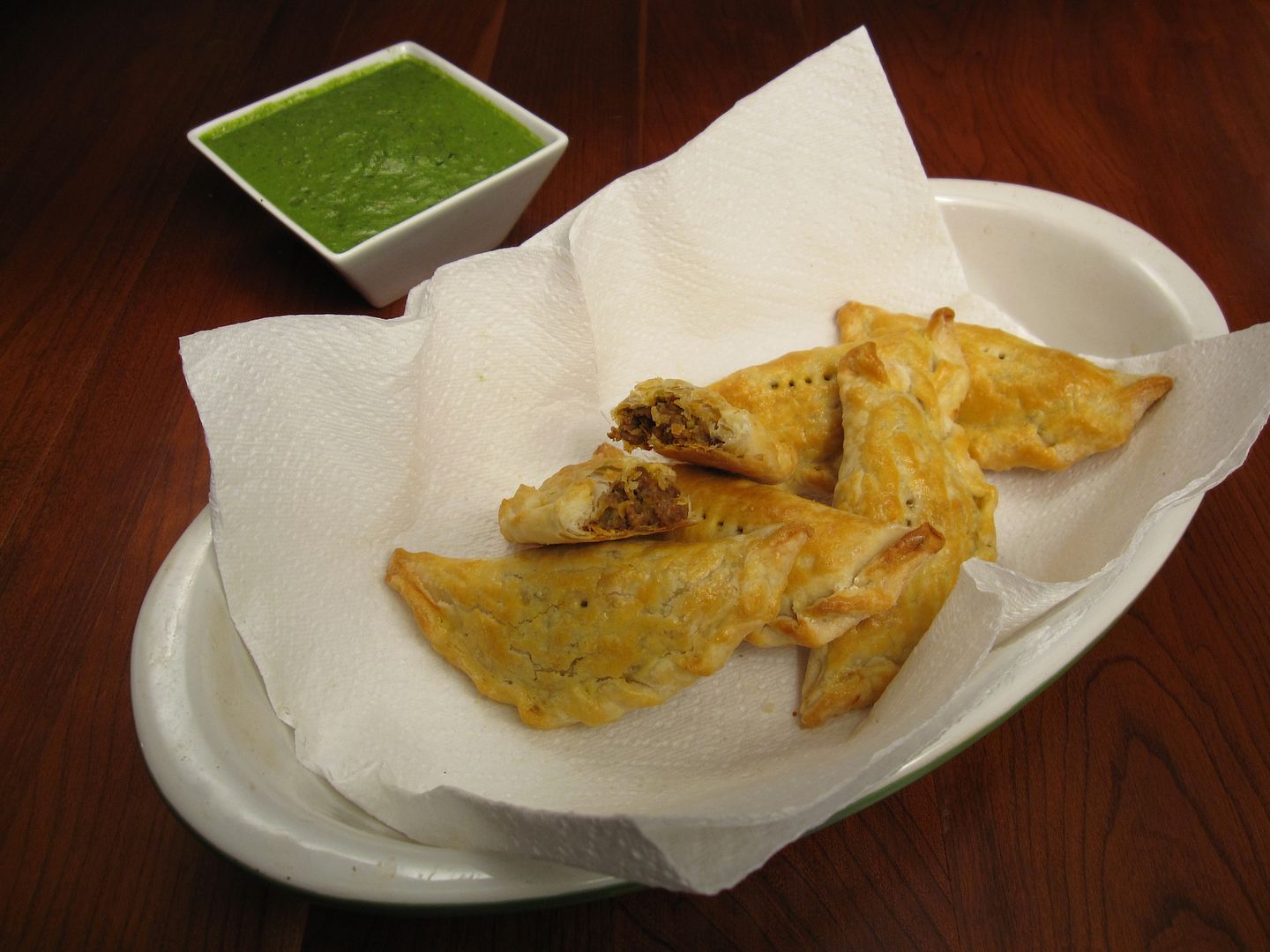 damnit...now I am REALLY hungry!!!

Me too! ^^^ Looks delicious Greg! Hope Ruben is doing ok.

I think I should request Applebees to make those as my appetizer, next time I walk in the joint

P.s Greg, I didnt know you were the next "Iron Chef"

I also prefer baked over deep fried empanadas. Usually that is not the case is it? LOL. With empanadas, So much better. Flaky dough instead of brittle and greasy.

"Empanadas Argentinas are always baked instead of fried." Just read that. Every country does it different. You did authentic ones.
Want a signature for fun or advertising?
Extreme members can put text and a link here!
Extreme Biz members can put text, a link, and an image!

I also prefer baked over deep fried empanadas. Usually that is not the case is it? LOL. With empanadas, So much better. Flaky dough instead of brittle and greasy.

"Empanadas Argentinas are always baked instead of fried." Just read that. Every country does it different. You did authentic ones.
Click to expand...

In all flaky-ness...
With a homemade dough the baked seem the route to go. There are store bought varieties in the frozen sections, I've used those in a pinch and they are better deep fried..........there's more ingredients on those labels then I can shake my reading glasses at...

Well done Greg, This one here and all of Gregs collection of eatery pics should go into the THP cook book.... Get well Ruben...

Deliscioso!!! I'm not sure I spelled that one correctly, thanks for sharing this wonderful recipe. I'm going to try it for dinner this evening, all your wonderful photos make me so anxious to try Ruben's empanadas. Get well soon Ruben.

I love the tortilla press! It has been a long time since I did empanadas. Never made my own dough but this inspires me.

I agree with THP, that picodillo looks great.

I have that same tore tillah press, cast iron, really nice to have around for other stuff like empy's.

Man, that looks good.  Someone stop me if I eat more then thirty of them.

I gotta do this.  My wife will love these...and I'll get my share as well!

New goal in life:   I hope I get grandchildren before I get a walker

I gotta do this.  My wife will love these...and I'll get my share as well!

mrs. blues is picky about foody sheeit  but I'ma do this for her.

Thanks for the comments !
Empanadas can be made with a wide range of ingredients depending on the country and region.
The hard boiled eggs, olives and raisens gave these a unique taste.

On more of an American "hangover" stand by food...I've made a version with ground beef, shredded cheese, diced hash brown potatoes and serrano peppers....freezes well. Just for those Sunday mornings after a late Saturday night.

It's really interesting to see make empanadas out of Argentina, and more extraordinary in USA.

Here speaks an Argentine. I have to congratulate you because you have all done very well... The only thing you will put too many ingredients. Although not all bad.
The original recipe does not carry mint, cilantro, coriander, Jamaican lime leaves either.(These spices here are not traditionally used.) The combination of many aromatic, can make very different to the original flavor. One can incorporate, but do not think so ...

Throughout the country, in each region are made differently. I like them as you have made them, so my wife prepares. but not spicy, in my house I just like spicy. Then. I like to put tablespoons Taquera or Ranchera sauces "La Costeña", that is purchased here.

The mint and the lime leaves are the only thing that seem weird to me for this. Cilantro and culantro are so damn similar I'd just pick one. Same with the shallot and the onion. I'd pick the onion... less expensive.

As per norm a little late on this.  Hope your buddy is doing well.  Never had empanadas but your pics make them look very very good. Making me hungry.
You must log in or register to reply here.

S
Tell me about your refried beans