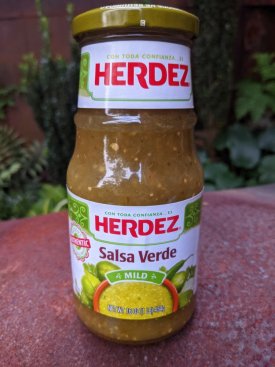 Business Member
Best grocery store sauce....mayo, yellow mustard, the occasional sticky sweet bbq sauce....Dank Sauce was a good find...other than that, i hit up Heat Hot Sauce Shop for lots of our favorites.

We do buy some verde sauce like Herdez to use in making crock pot pork. And tinned Hatch chiles, but that id

The Hot Pepper said:
My answer:

Yup. Some diced pork , onions, garlic, misc tomatoes and hatch, beans, crock pot for the day, served over rice or with tortillas...
PureEvilProducts
The Chile Addict's prayer-"Lord, grant me the wisdom to know it will be too hot, the courage to eat it anyway, and the serenity to accept the pain that follows. Amen"
PepperPeopleRock!

I am lucky that a lot of the supermarkets around me carry local hot sauces. this M&H Sweet potato Hot sauce is awesome. pretty easy to find a selection of pepper north sauces too. 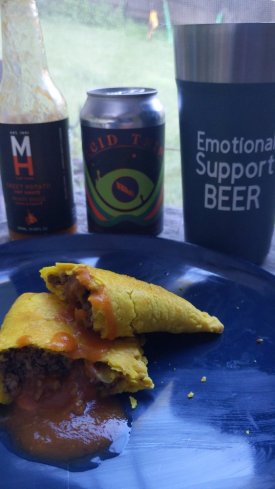 most the sauces I can find local are malindas. I was lucky enough my wife ordered me a box of lucky dog sauces for my b-day. Really enjoyed heats a peach. Saving rest for wings

Admin
I've never been here, kinda famous that place is: 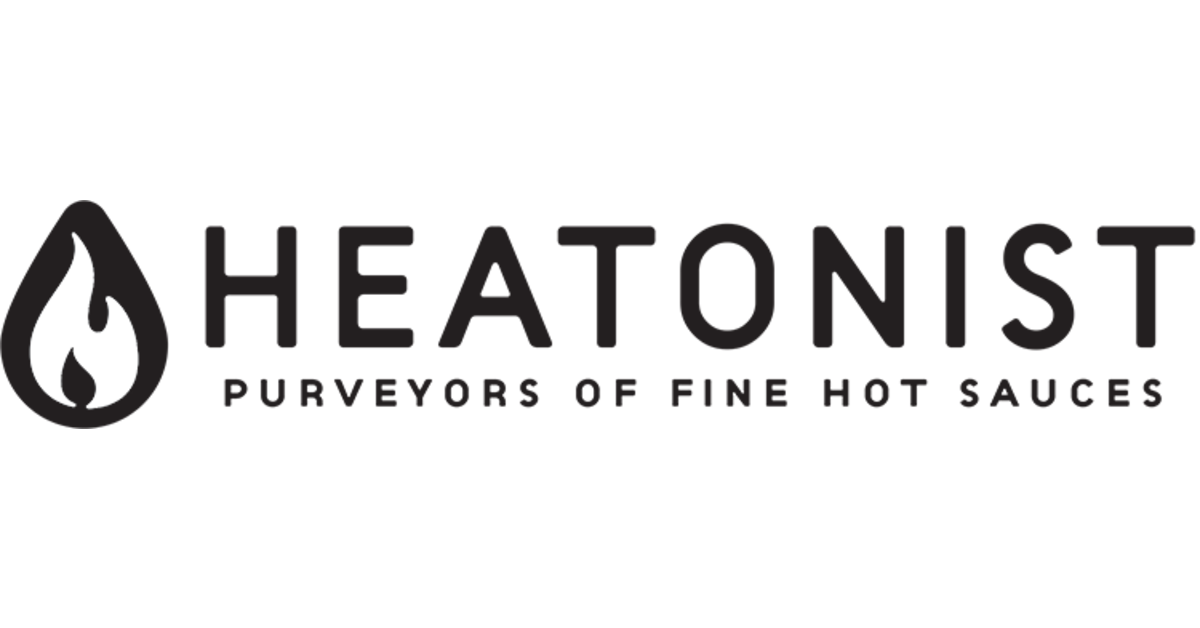 Hot sauces from small-batch makers including the Official Hot Ones Hot Sauces.

That's not a product I've ever found retail here in S.C. It was the only hot sauce I can recall offered during my tour in the Navy, save for the little bottles of Tabasco that came with MREs. It filled the bill at the time, would buy some if it were readily available, for purpose of nostalgia. It sure helped the fake eggs at breakfast... I seem to think the bottles had a MIL-SPEC number......
"You Have The Right To Remain Fiery"
The company "Evidence" click here

So we have a store here called Jungle Jim’s. Great selection of sauces there. And Pepper Palace has a bunch as well. But I assume you are asking about your basic grocery store. So…. Chalula.

WarrantMan said:
That's not a product I've ever found retail here in S.C. It was the only hot sauce I can recall offered during my tour in the Navy, save for the little bottles of Tabasco that came with MREs. It filled the bill at the time, would buy some if it were readily available, for purpose of nostalgia. It sure helped the fake eggs at breakfast... I seem to think the bottles had a MIL-SPEC number......
Click to expand...

They don't have it in SC?!!? Whaaaat?? It's very basic like, red vinegar. Eggs and frozen pizza is about all I use it for. We like it better than Tobasco because it doesn't have that fermented undertone that to me makes Tabasco taste like it's turnt. LOL

it isn't a regularly stocked thing, but whenever I see Crystal hot sauce at a grocery store , I stock up . I went searching in the pantry last week and looks like I am down to just one opened and one on deck in the pantry
Last edited: Aug 22, 2021

@PaulG , I WISH I could get readily grab that Secret Aardvark sauce at the grocery store! That stuff is deeeeee-licious!

@WarrantMan , by the time I was in the military, they’d switched to Texas Pete’s

For the “usual suspects” at our grocery stores, I really like the chipotle sauces from Tabasco and Cholula. Once in a while I can find Melinda’s. I like their Scotch Bonnet and Mango Habanero sauces. The one time I saw High River’s “Tears of the Sun” sauce on the shelf, I grabbed 3 bottles, especially after hearing @Edmick rave about it. Glad I did too, because it’s freakin’ awesome. Walkerswood makes a pretty damn good jerk sauce/paste/marinade too, that (I believe) comes in a couple different heat levels.

@The Hot Pepper , I’ve never tried that Herdez Salsa Verde sauce but, their Guacamole Salsa sauce is off the charts good! Super creamy and great on Mexican food. Label says it’s mild, but it packs a little bit of kick from the poblanos in there: 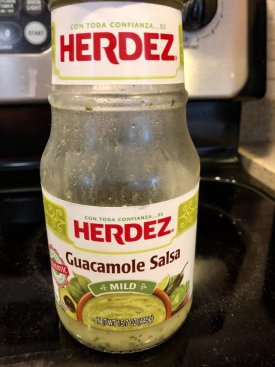 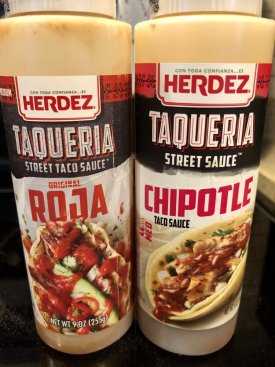 For hot wing sauce, I always go for a local favorite from Connecticut; Archie Moore’s Buffalo wing sauce. Another thick, creamy sauce that’s a staple in my fridge: 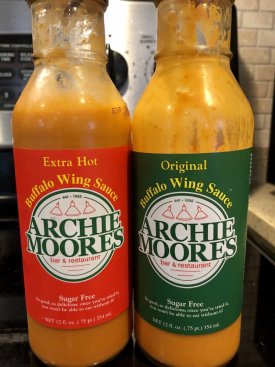 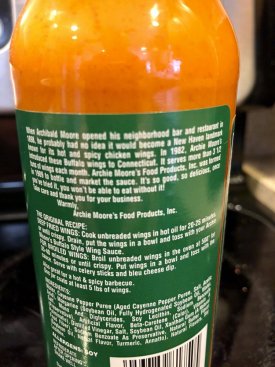 I just found this sauce in the store a few months ago, and it’s really tasty! Goes well on just about anything. (No, this pic isn’t a hot sauce but) They make a Buffalo sauce infused version of this stuff that’s purdy darn good too (same style bottle but different color scheme on the label, if I’m remembering that correctly) 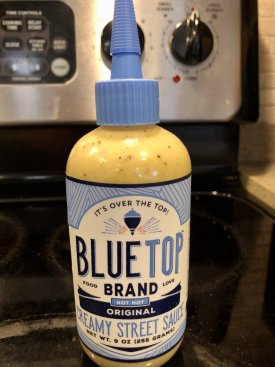 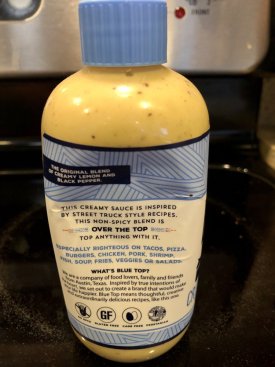 The Hot Pepper said:
That street sauce looks like ranch with a bit of mustard.
Click to expand... 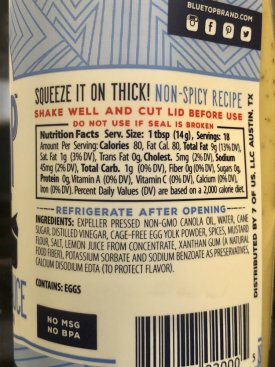 "I come in peace. I didn't bring artillery. But I'm pleading with you, with tears in my eyes: If you f*ck with me, I'll kill you all."
-General James "Mad Dog" Mattis (to Iraqi tribal leaders, 2006)

Up until Earth Fare closed down, Elijah's Xtreme Regret and their Ghost Pepper sauce, now I have to order online. Even the Tropical Pepper Co Ghost Pepper sauce was good, but I can't get that anymore either from my local grocer. I went to the Farmers Market in my area a couple weeks ago, Black Dog Gourmet White Balsamic Reaper Hot Sauce is delicious.

Admin
Tropical is like the first "gourmet" sauce in anyone's supermarket going way back!

I go through so much Crystal this way.
I think it was @sicman that got me hook on eating avocado with hot sauce like a savoury pudding cup. 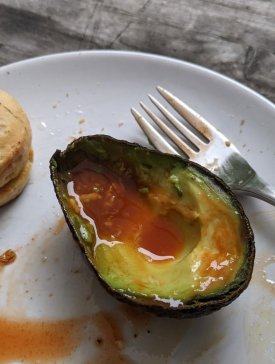 Upgrade Now!
You must log in or register to reply here.
New Posts