Just getting this started so I can get a url.
I will post more about this in a couple of days. 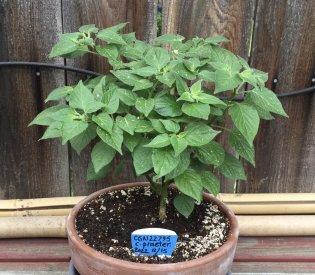 Pr0digal_son said:
Trim up some of the brown and funky limbs with disinfected pruners,repot up a container size and start feeding that plant. C.lanceolatum should be a very dark green color,almost a blue tint to it.
Click to expand...

Thanks for your hints. I already did a repot, also fed it. Did it again today (feeding). Trimmed brown limbs today. Didn't the funky limbs yet, some are those who dropped old leaves and start new leaves from nodes, will see how they develop.
In your opinion, should I keep it more in shadow, or full sun? We already have here +30C (means +86F).

Yes. It sort of floats to the top when I water.
Every Pod a Victory! Life Force is Strong! \O__
Links to all my grow logs here.

PaulG said:
Yes. It sort of floats to the top when I water.
Click to expand...

Till now I did used petlite only when sowing, this year I have used some mix leftover with perlite in bigger pots, will see how it works.

rghm1u20 said:
Till now I did used petlite only when sowing, this year I have used some mix leftover with perlite in bigger pots, will see how it works.
Click to expand...

I'm not an authority on this, but I like to throw
a shovel full of perlite into my bags of potting
soil. In the past I used horticultural pumice when
I mixed my own soil to fill the big containers, equal
parts peat, pumice and compost, which worked
well, even in the compacted bottom soil in the big
containers, breaking up easily even after a hand-
ful of years in the container.
Every Pod a Victory! Life Force is Strong! \O__
Links to all my grow logs here.

thoroughburro said:
I grew the Hermosillo Chiltepin from Jim Duffy, this year. It had a very short (less than 2 feet), but erect and tree-like growth habit, with notably small leaves, along with strong lignification in its main stem and branches. I made a mental note that it seemed perfect for bonchi. I’m not experienced enough with glabriusculums to know how common those traits were, but it was a gorgeous plant.

I also have seeds of Hermosillo Chiltepin Dwarf from Peter Merle, which sounds like it might be similar if not from the same population… although the branches visible in his photos seem a more spindly and don’t show lignification. I’ll have to grow it out and see for myself, I suppose.
Click to expand...

I’ve been eagerly following @PaulG’s Hermosillo Chiltepin Dwarf since making this comment, and now that my own HCD are coming along, it’s obvious that it is not really similar to Duffy’s offering, at least not my 2021 example.

Here are both containers side by side: The stems show no early lignification and, contrariwise, are particularly delicate and flexible. Despite that, the leaves are a bit larger than what I grew last year. They’re charming, and I’ll love them for their qualities, but my bonsai aspirations will move on to a surprise hit, Bird’s Eye Baby: Its pods are pequin shaped, but in size they are no larger than a large peanut. They are very hot, easily as hot as the chiltepin I grew last year (I ate one green today; decent “green pepper” flavor rather than just vegetal; would probably pickle well). No lignification yet, but Fatalii Seeds’ photos make me hopeful for later, and the stems are very stiff and twiglike even when thin.

I would describe Bird’s Eye Baby as a heavily branched, dwarf C. annuum var. glabriusculum with unusually small leaves and pequin shaped fruit. I suspect the heavy branching and tiny leaves have been selected from a wild glabriusculum starting point.

I will probably grow Duffy’s Hermosillo Chiltepin again next year. I’m beginning to feel like the example I grew in 2021 is “the one that got away”.
Last edited: Jun 11, 2022

Extreme Member
Nice comparison of the Chiltepín ‘Hermosillo’
strains @thoroughburro.
Every Pod a Victory! Life Force is Strong! \O__
Links to all my grow logs here.

Extreme Member
Here's the Chiltepin 'Hermosillo Dwarf', Semillas
la Palma variety. Like most of the plants, looking
a bit pale in the cloudy weather. On the plus side,
it is trying to grow some berries! Extreme Member
Despite what we refer to as the June suck,
the rest of plants under cover and out of the
rain are at least surviving. I'm afraid we will
only see a few days of sun in June.

Tepin' pshngo'. Has taken a beating from
the weather. Hoping it hangs on for the
Summer sun. 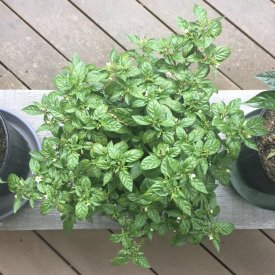 CAP 524 c. chacoense has fared better than
most. Starting to flower a bit. 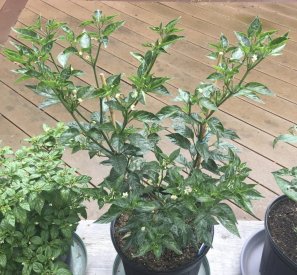 Extreme Member
Pair of c. flexuosum. They have crazy skinny flower
stems. The pods that are setting are just as tiny, basically
a stigma poking out of the calyx. Hoping Summer sun
helps the fruit along when it gets here. Both plants are
going through a growth spurt. They seem to handle this
weather okay, as well. 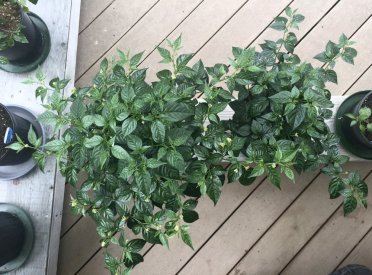 The CGN 20497 c. carcenasii has finally started to grow more
vertically than the photo angle shows. After three prunings 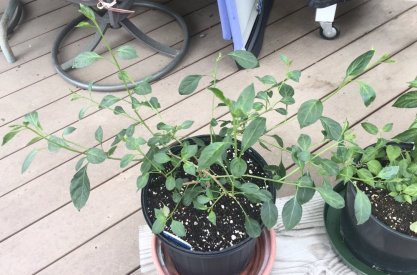 Extreme Member
A tale of two c. tovari. Both in #2NC pots.

This specimen was a super slow grower,
in a small pot for a long time. It was never
topped. About one-third the height of the
other specimen below. 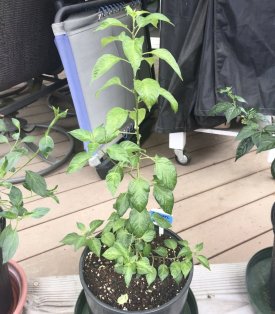 This one grew super fast, and went into a
#2NC early on. Got too tall for the lights,
so had to yard it back. Reminds me of
Houston Rockets' 'Twin Towers'. 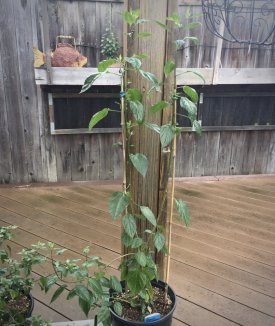 The new Lanceolatum continues to get bushier. A small first round of pods have ripened on SLP's Dwarf Chiltepin de Hermosillo. Same with a small TX Rice, which is still growing in its original 3" container. For many of the wilds, I'm keeping at least one of the plants indoors in a smaller container for a quicker batch of isolated pods. A few pods on this Chacoense 212 are ripening. I had to top this Tuxtlas, but it's recovering nicely. It's the first time I've grown this one, so I'd have preferred not to have topped it; I just didn't have much choice. I'm not sure yet whether I'll keep it indoors for the duration or just until it sets a good number of iso pods. Either way, it looks like it should be ready to flower soon. Extreme Member
Everything looks really good there, CD!
Every Pod a Victory! Life Force is Strong! \O__
Links to all my grow logs here.

The long awaited Monograph of wild and cultivated chili peppers has just been published! ChilliCrosser said:
The long awaited Monograph of wild and cultivated chili peppers has just been published!
Click to expand...

Thanks for posting that, CC!
Every Pod a Victory! Life Force is Strong! \O__
Links to all my grow logs here.

Extreme Member
The taller c. tovari has finally started to set some
flower buds. Thought it would just be two skinny
sticks judging from it's growth habit. Branches
starting to grow out as well. Initial buds forming on a couple of wilds