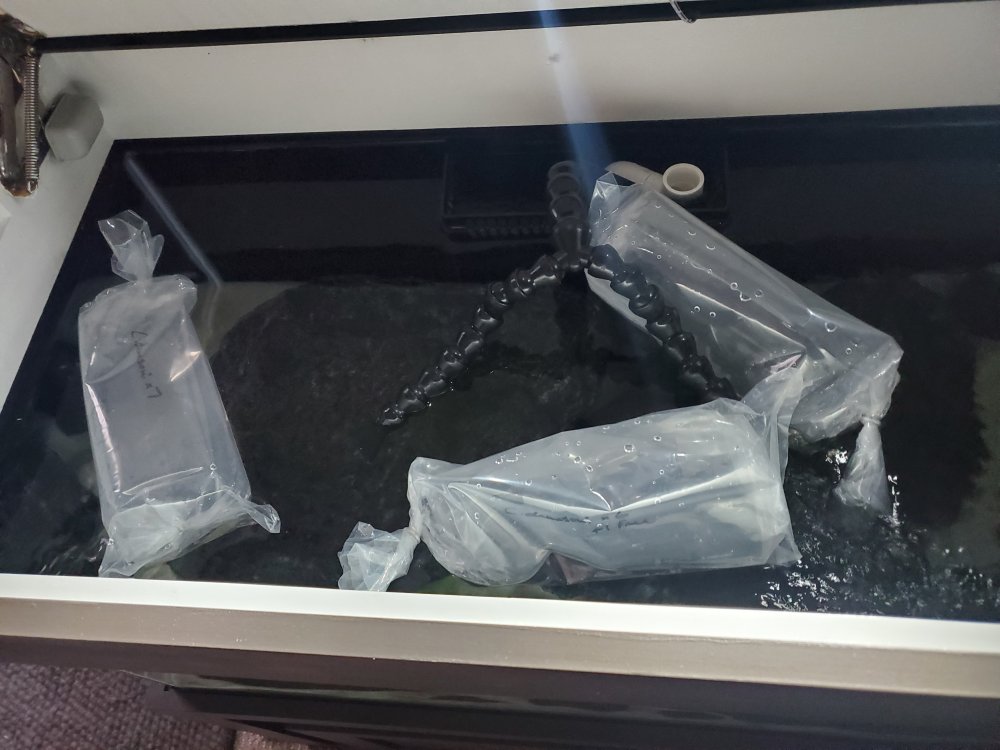 Extreme Member
Looks like they all made it woohoo!

Yep. Dave is supremely confident in his shipping methods. He ships every day all around the world in any season.

YES!! I'll get them out of the bags in about 20 minutes.
Last edited: Dec 1, 2022
DARWI ODRADE for President campaign field officer

Extreme Member
And a new worry already, lol. Pretty sure these guys can get through the overflow slots. There's nothing that will hurt them in the box or the sump, but it'll be tough to get them back into the display.
DARWI ODRADE for President campaign field officer

You have to name one Tinkerbelle, maybe the dopey one, there's always a dopey fish
My fingers have verbal diarrhoeaa

Extreme Member
Those fish seem happy healthy and unphased by the trip. Probably the coolest place they ever seen..

Tinkerbelle099 said:
wow at long last - now what shall I do with my time
Click to expand...

remind him about the water changes

Grass Snake said:
remind him about the water changes

ohhhh yes - I forgot about that

Grass Snake said:
remind him about the water changes

Tinkerbelle099 said:
ohhhh yes - I forgot about that

No, no - to turn the temperature back down before the fish arrive.
DARWI ODRADE for President campaign field officer

Extreme Member
Great to see them all in their new home, E! And cool to see the video of them adjusting to the currents and structure.

Have you given them all names yet?

CaneDog said:
Great to see them all in their new home, E! And cool to see the video of them adjusting to the currents and structure.

Have you given them all names yet?

They're settling in very well. I doubt I could have told they'd only been in the tank for a few hours if I didn't know. It'll be really pretty when they put on a little more size and color.
It was really a trip when I dumped them in the water and they realized the beef was back on, lol. There was a distinct Mexican standoff moment between three or four obvious males where it seemed like their eyes all narrowed and focused on each other at once and they went, "You bastard.." They started right in trying to lay claim to that spot in the second video. All the others schooled in the lower front left corner (a high flow spot where the water comes down the corner, hits the sand, and turns back into the tank) for at least a half hour blowing all the bag water funk out of their gills.

Lol, no. I don't name fish. Who could tell them apart, anyway? I tend to look at them as a group rather than a bunch of fish in together. And I used to have lots and lots of fish. A single new brood can easily be 20 or 30 fish. I often didn't know exactly how many of each species I had - it's just not that important a datum. A few reasons I guess I never got into the habit of naming them. I mean.. they don't respond to a name. Doesn't seem to be much point. Maybe I feel like it anthropomorphizes them too much. I never really thought about it. I just don't see them as pets; I enjoy the hobby very much and have a great appreciation for the fish, but no affection for them.
Last edited: Dec 1, 2022
DARWI ODRADE for President campaign field officer It never occurred to me you could mail order fish

HellfireFarm said:
It never occurred to me you could mail order fish
Click to expand...

Yep! I've even shipped some myself.
DARWI ODRADE for President campaign field officer

Uncle Eckley said:
No, no - to turn the temperature back down before the fish arrive.
Click to expand...

Don't forget to turn the temperature down when the fish arrive

Extreme Member
Yep, fish in the overflow box. Managed to get one out, at least one still in there. Irritating. Need a screen.
DARWI ODRADE for President campaign field officer
You must log in or register to reply here.

hydroponic How to start your own hydroponic pepper grow